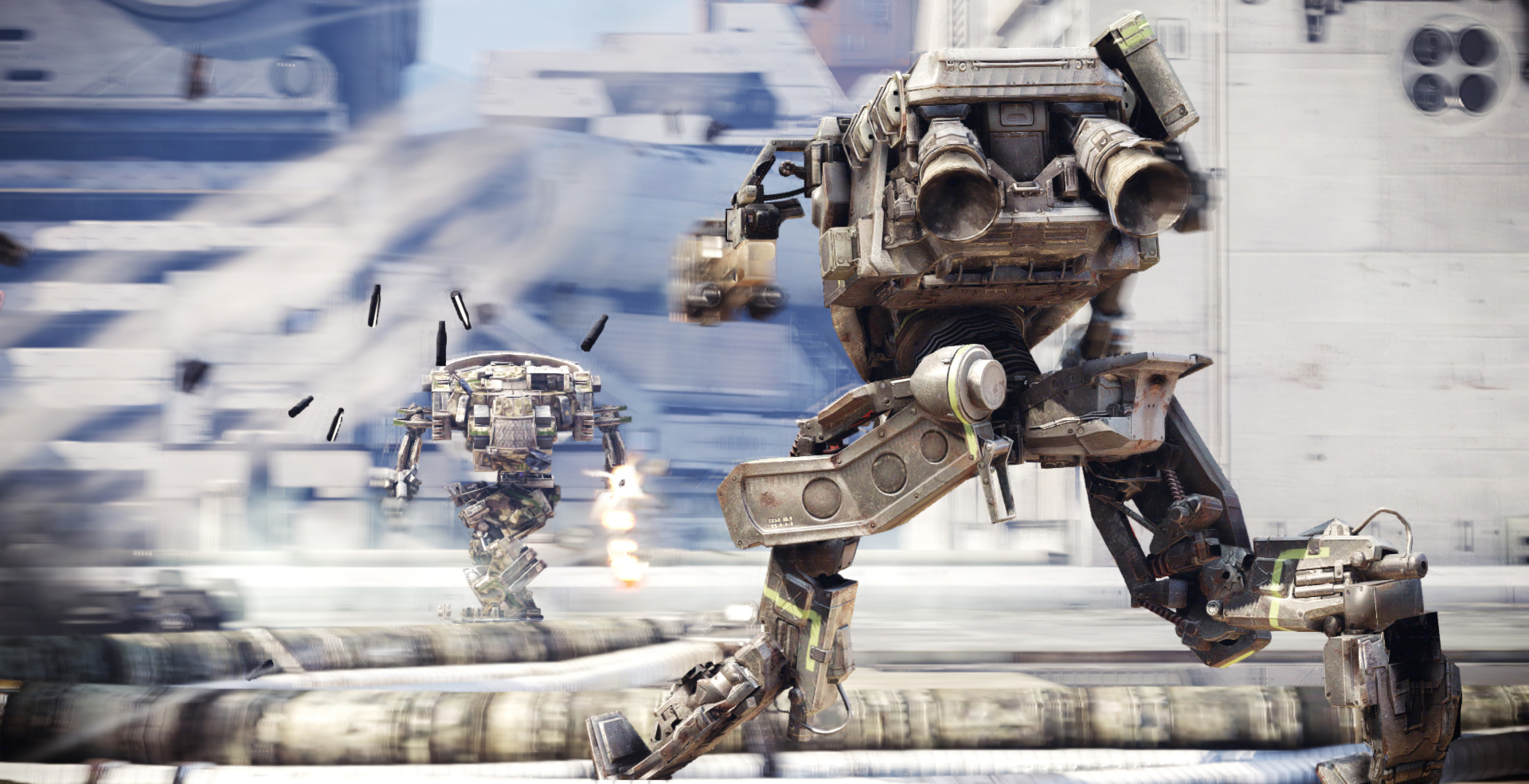 The grinding gears of war

Hawken is a game I keep checking back in on. When it originally released back in 2012, it seemed ahead of its time, a free-to-play shooter with AAA production values featuring mech combat. For someone who is both cheap and a mech fan, it was a done deal.

All too soon though, cracks began to show. Hawken spent a protracted period of time in a nebulous beta state (with a functioning in-game shop) and was re-tooled several times with sweeping patches that changed just about every element of the game. Eventually it was re-released on Steam in “Early Access” and then seemingly abandoned by the original developer, Adhesion Games. To the delight of the game’s faithful fans, it was then picked up by Reloaded Games, but the honeymoon soon ended after another lengthy period of inactivity and few updates.

I’ve jumped back into the game during each major change to check on the state of things. Now, with a console release brought to us by 505 Games, is it finally time for Hawken to shine? Or will this just be another heart-breaker in its long and sordid development history? Well, you know what they say: “Fool me once…” 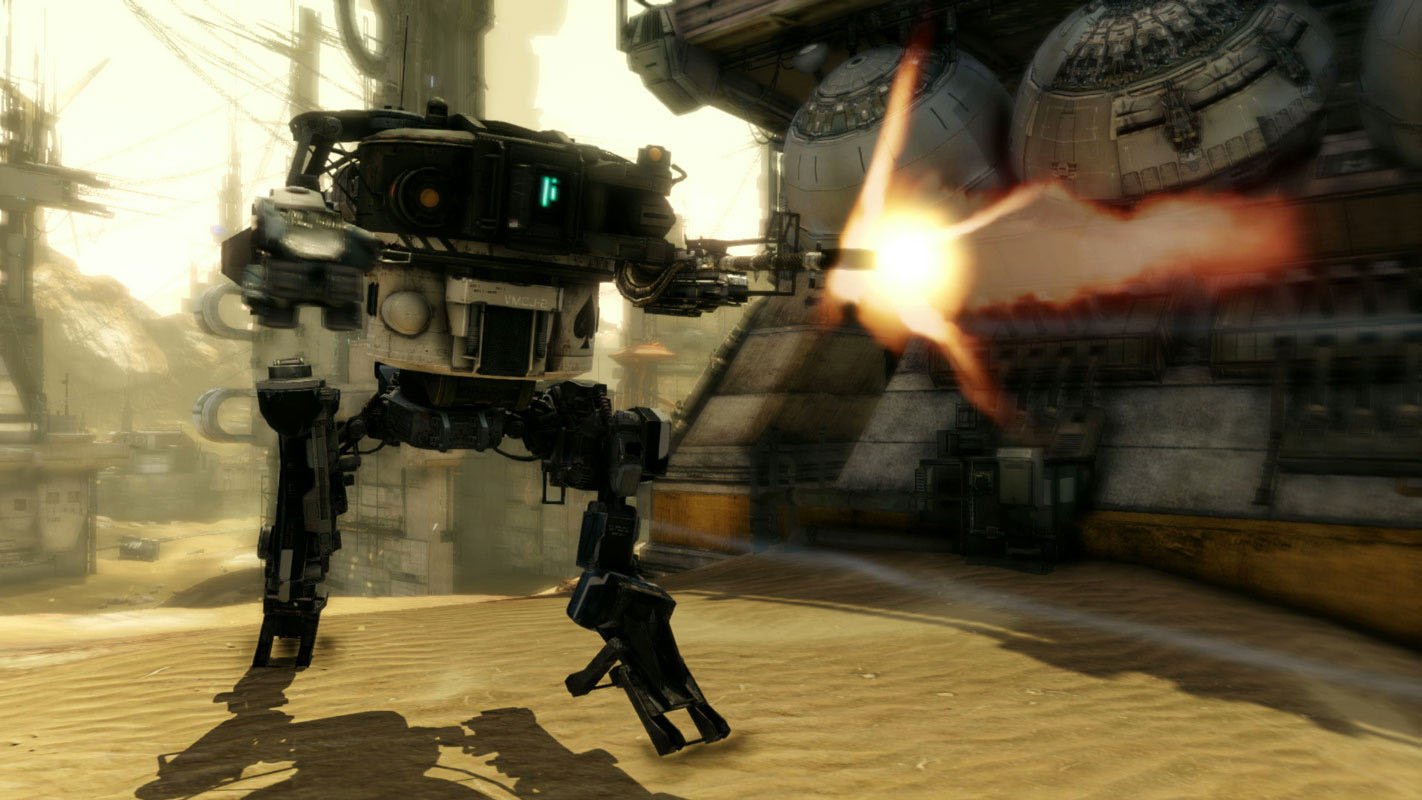 From its first release, Hawken has always had its troubles, but the one thing you could always say for it was that it was an undeniably great-looking game, especially considering the free-to-play price tag. It scaled reasonably well too, looking gorgeous even on moderately powerful PCs. The grim and dark future of mechanized warfare never looked so dang pretty.

Which is why it’s confusing that it looks so bad four years later on the PlayStation 4. For a game that ran smoothly on modest rigs years ago, the inconsistent frame rate and constant screen tearing on the today’s consoles is truly baffling. This isn’t a problem only on the PS4 version either, a quick check with Digital Foundry confirms the issues are present on Xbox One as well.

The frame rate drops are a constant wet blanket on the experience. While predictably they crop up most often during frantic firefights (you know, when a smooth frame rate is vital), they also pop up at random during the most mundane moments. Just spinning the camera around in the menu/garage screen can be enough to crater the frame rate.

The switch from keyboard and mouse to control pad doesn’t do the game any favors either. Both the primary weapon fire and all-important boost button are mapped to the left shoulder. Depending on your natural grip of the controller, this arrangement can make it difficult to dodge and fire at the same time without some heavy re-adjustment. While the awkwardness can be overcome, it never feels natural.

The problem with Hawken‘s gameplay has always been that it can’t decide what it wants to be. It dresses up in the costume of a tactical mech experience with a cool junkyard aesthetic, what seem like tons of customization options, and all sorts of HUD details. But, the actual gameplay mostly resembles a conventional shooter. There is no locational damage (picking off arms or legs for example) and most of the weapons are point-and-shoot. The threat of over-heating from firing too much and being able to deploy repair drones during quiet moments help to accentuate the mech feel, but not by much.

The mechs themselves are presented as dystopian death-machines, but don’t carry the weight, or really the weaponry to sell that pitch. While divided into Light, Medium, and Heavy chassis, all of the mechs are more nimble than you might expect, having the ability to boost into the air for limited periods of time and dodge left and right with quick thrusts. The Heavy mechs have a little more presence with their ability to fortify up and deploy as a gigantic turret, but by and large, they all feel more like heavy-set humans who can hover than thundering war-machines.

Unlike something like Titanfall, where the gameplay is divided between being in the cockpit of a towering machine and scrambling on the ground as a foot soldier trying not to get squished, Hawken is a mech-only affair. The predominant level design of industrialized cities made up of abstract blocks spackled with greebles don’t provide any sense of scale. Everything is mech-sized and everyone else is a mech, so being in a mech just feels like the default way to experience the world. Ordinary instead of impressive.

This could have been avoided if the mechs shot each other with massive artillery pieces, but the vast majority of weapons feel like slightly upsized versions of FPS standards. Mechs tool around and plink at each other with sub-machine guns, grenade launchers, and shotguns like any good Unreal Tournament competitor. Even the rockets and missiles lack real punch.

Dicing up the experience, each mech comes with its own unique talent that refreshes on a cooldown (coolant to flush the heat-gauge, a damage boost, cloaking device, etc) as well as two consumable items that reload on respawn. Even here though, these items are roughly analogous to typical grenades and flashbangs (and also the source of some degree of unfairness, but more on that later).

It’s an awkward middle-ground that pleases nobody. The mechs are too agile and anemic to appeal to mech fans coming from the Battletech school of giant walking tanks, and too cumbersome to invite fans of Gundam-style aerial acrobatics. The gameplay on tap is not terrible, but does nothing to distinguish itself from any other generic shooter. If this all felt dated back in 2012, it feels positively antiquated now. 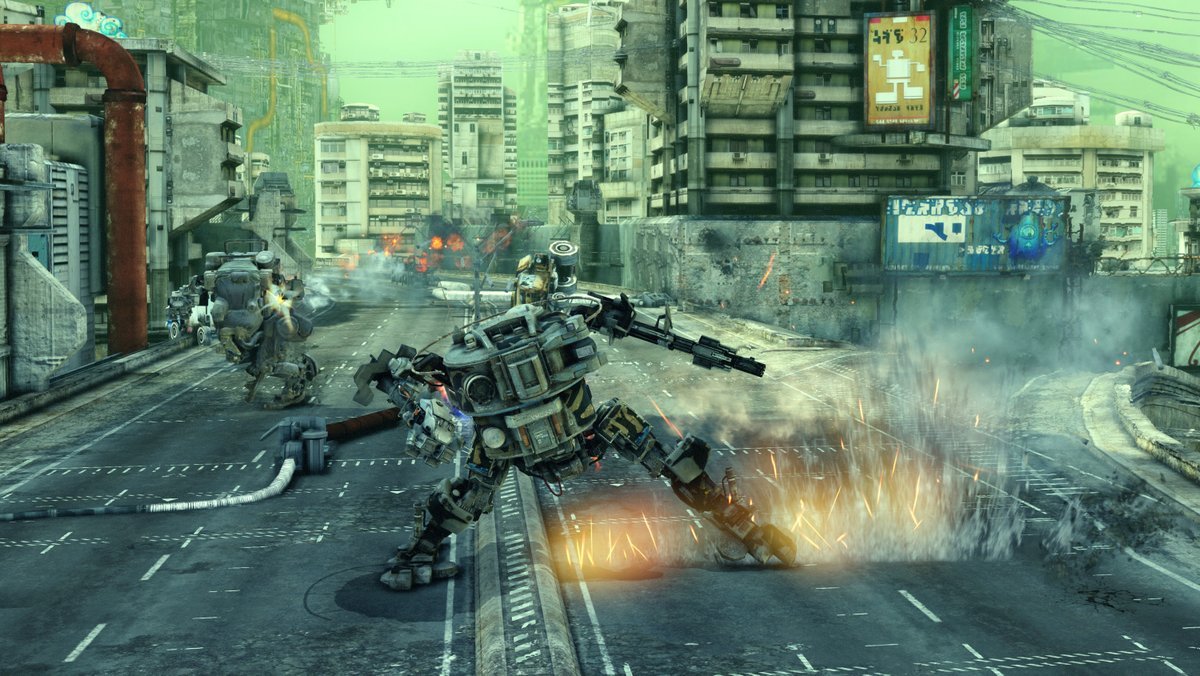 Also ridiculously antiquated is the free-to-play monetization scheme. In an era of MOBAs and other free-to-play games settling into reasonable, cosmetic-based methods of separating fans from their dollars, Hawken is a grim swerve back to the early days of hellacious grinding and barely disguised store-bought advantages.

Progression in Hawken is shackled to an almost unbearably slow pace by the combined efforts of a currency grind, gated purchases, XP tiers, and upgrades. All presented with little explanation and no apologies. Seriously, to figure out exactly what you need to do to get the mech you want and compete at a fair level you have to basically draw it out on a whiteboard. I tried to, but got distracted/depressed halfway through and just made a doodle of me hanging myself.

Hawken runs on two separate currencies, Hawken credits (HC) which you earn while playing, and Meteor credits (MC) which you buy with real money. While new players start with a pad of HC to get them rolling, the realities of the grind set in pretty quick. HC accrues slowly and you’re going to need a lot of them due to the asinine way mechs are gated.

You can’t just purchase the mech you want in Hawken, you have to have to necessary prerequisite mechs in your garage first. This is an obvious ploy to increase the amount of grind necessary to find the mech that suits your playstyle the best that is further compounded by hiding the more interesting mechs behind several rows of fairly similar robots.

If you’re the type who likes to play the big slow hitter in a multiplayer game and want to buy one of the impressive Heavy mechs, you have some work ahead of you. The Heavy mechs are generally hidden off to the sides of the confusing as shit “mech-web,” meaning you not only have to buy SEVERAL different machines just to gain the privilege of buying the mech you actually want. Settle in. 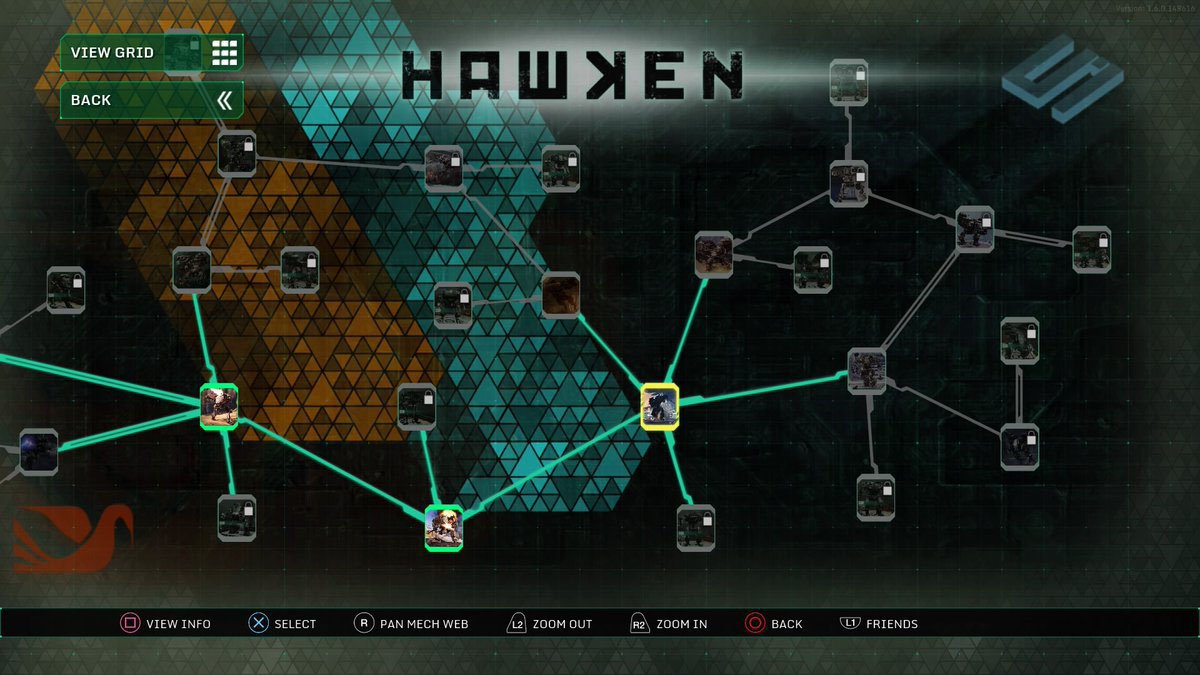 Of course, all of this can be circumvented by throwing cash at the game. You can purchase whatever you want with the real-money MC. Personal tolerances for “pay-not-to-grind” systems are going to differ, but Hawken‘s take on the concept seems particularly crass.

The grind doesn’t end there though. There are also item upgrades to purchase (again, either with increasingly prohibitive amounts of HC or by juicing the game with some cash). In earlier iterations, these upgrades were presented as options – any mech could buy any upgrade, but had limited space to slot them, meaning you had to make trade-offs. These days, upgrades are hard-locked to each chassis, taking away the customization element and basically making it a sub-grind to get your machine up and running at its best.

But it doesn’t end there, either! You also have “G2” versions of the same goddamn robots to unlock with XP ranks and then buy again! These mechs then have their own versions of the same items which can be upgraded with even better versions that confer a real battleground advantage.

Higher level item upgrades can be used multiple times per life, have a greater effect, and generally slant things in the users favor. It’s pay-to-win obfuscated. Technically, it’s players who have played longer that have the advantage, but when that grind is ridiculously long and can be greatly reduced with money, that distinction becomes pretty damn blurry.

Are you exhausted yet? I am. 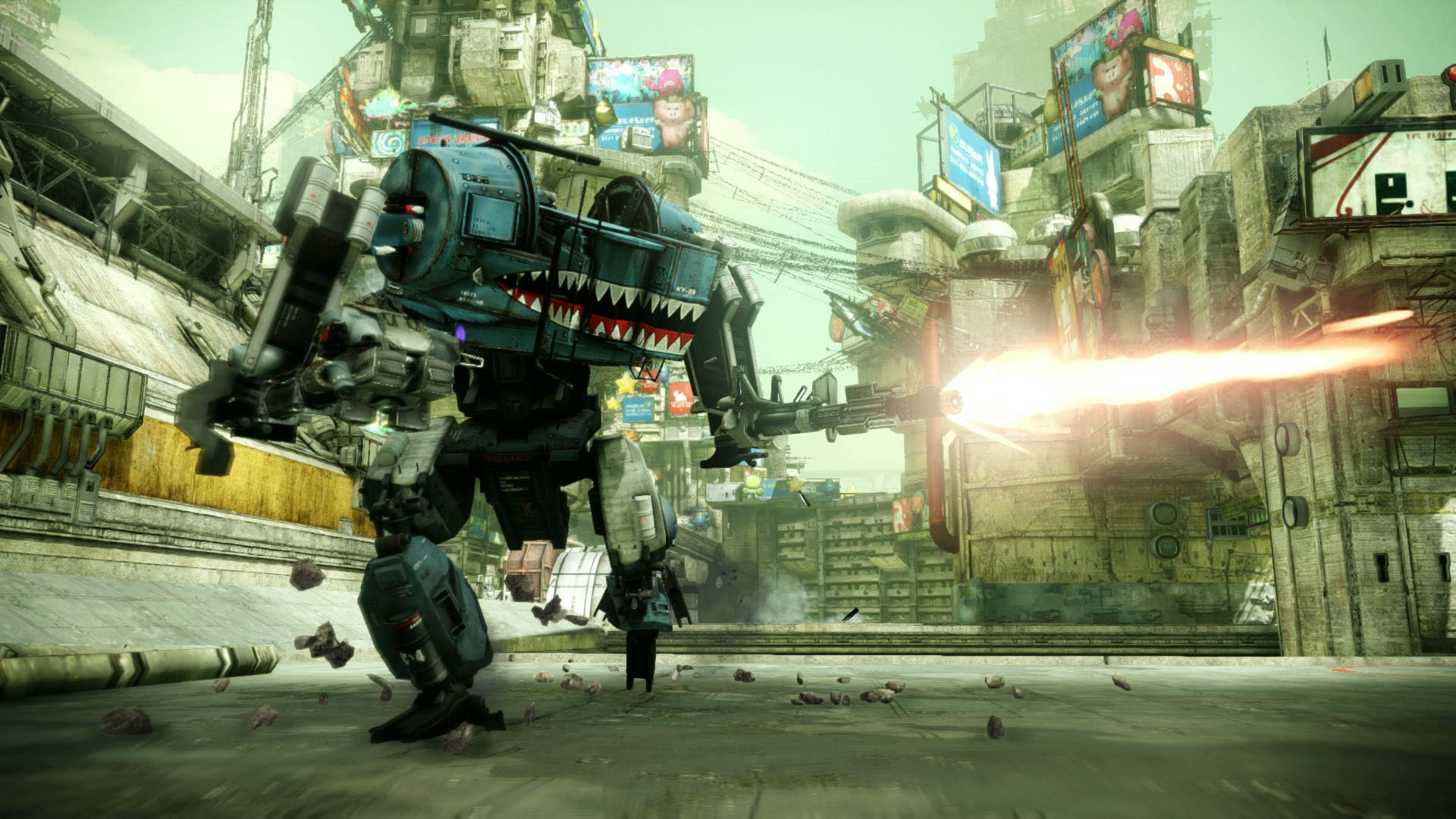 It’s a real shame that 505 Games felt it had to go that route because the customization and cosmetic elements available are actually quite good, the kind of dumb thing I would normally throw cash at if I wasn’t feeling like the game was dicking me over in other ways. Every chassis has tons of detail options that change the overall look and feel of the mech’s torso, arms, and legs to make yours distinct. There are some fun paint and camo options with surprisingly flexible color options. Hell, there are even alternate HUD colors to buy! I’ll play with a dumb neon-purple control surface any chance I get.

On the plus side, there are plenty of game modes to keep you occupied while you grind. The usual death-match options are all present, along with some more unique choices like Missile Assault and Siege. I particularly enjoyed the Siege mode, which pits the two opposing teams in a race to collect energy resources to fuel their aerial battleship, and then squabble over anti-air emplacements to protect their ship and splash the opponent’s. It’s a frantic scramble between alternating objectives with a fun risk component involved (it’s entirely possible to be picked off while carrying a belly full of fuel that can be scavenged by the enemy).

A co-op horde mode is also available. This is a great alternative when you get tired of the competitive matches or when you need a more relaxing environment to practice in. I’d recommend players spend some time dunking on the bots and getting a feel for their mech and weapons before jumping into live matches.

Hawken has never been a terrible game, but it has never made a case for itself as anything more either. This console version puts up even less of a fight. If you’re broke and bored this summer and looking for something to sink some hours into, Hawken on console could be a reasonable pastime. But there is no getting around the fact that this is the worst way to play an already mediocre game.