Every so often we tackle dual reviews, where two authors share their takes on a game and provide a single combined score. What better game to bring that concept back than Half-Life: Alyx, the first new Half-Life game in ages.

Gather around as Chris Carter shares his thoughts with the Valve Index version of the game, while Brett Makedonski plays it on the Oculus Rift. 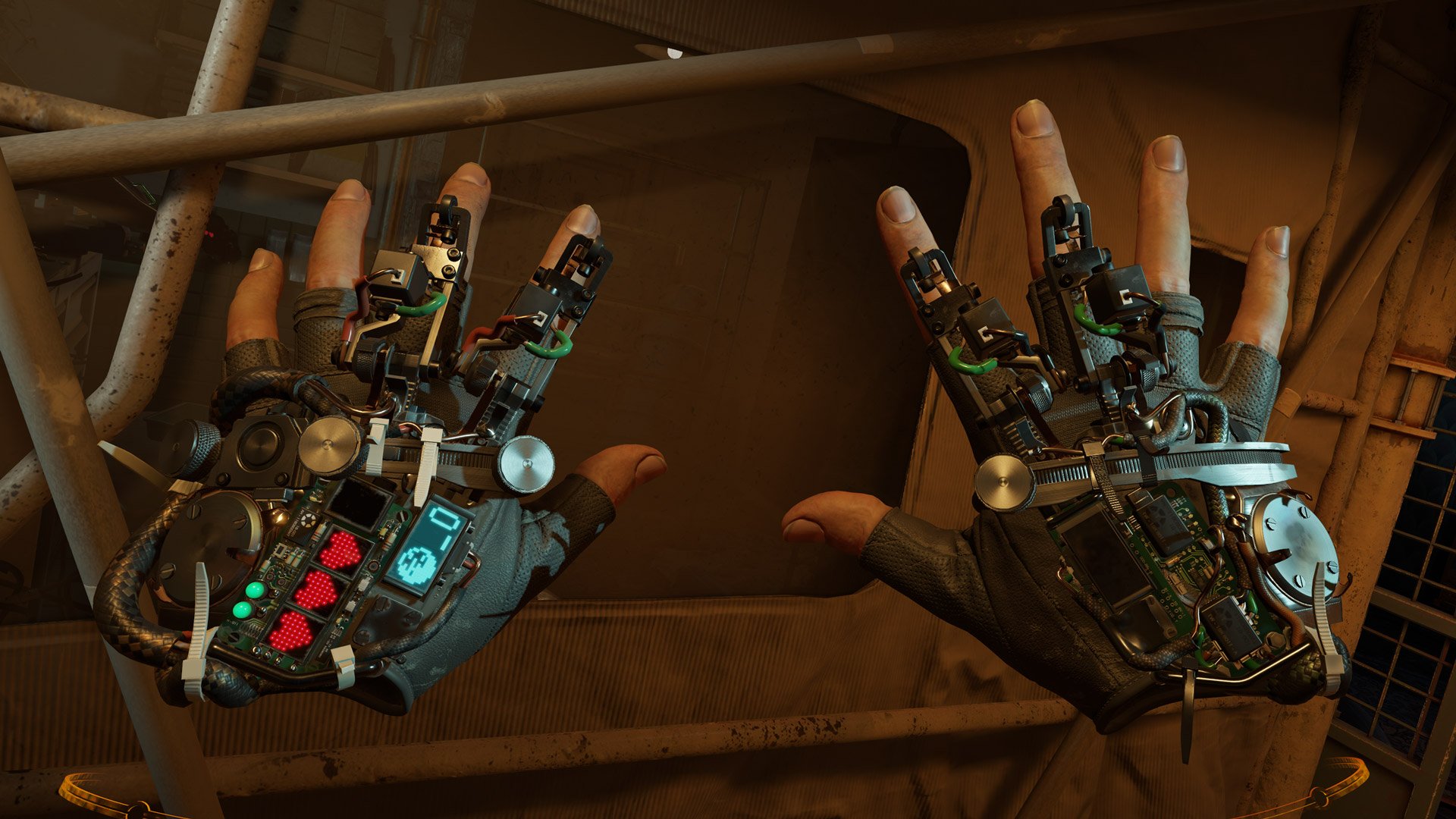 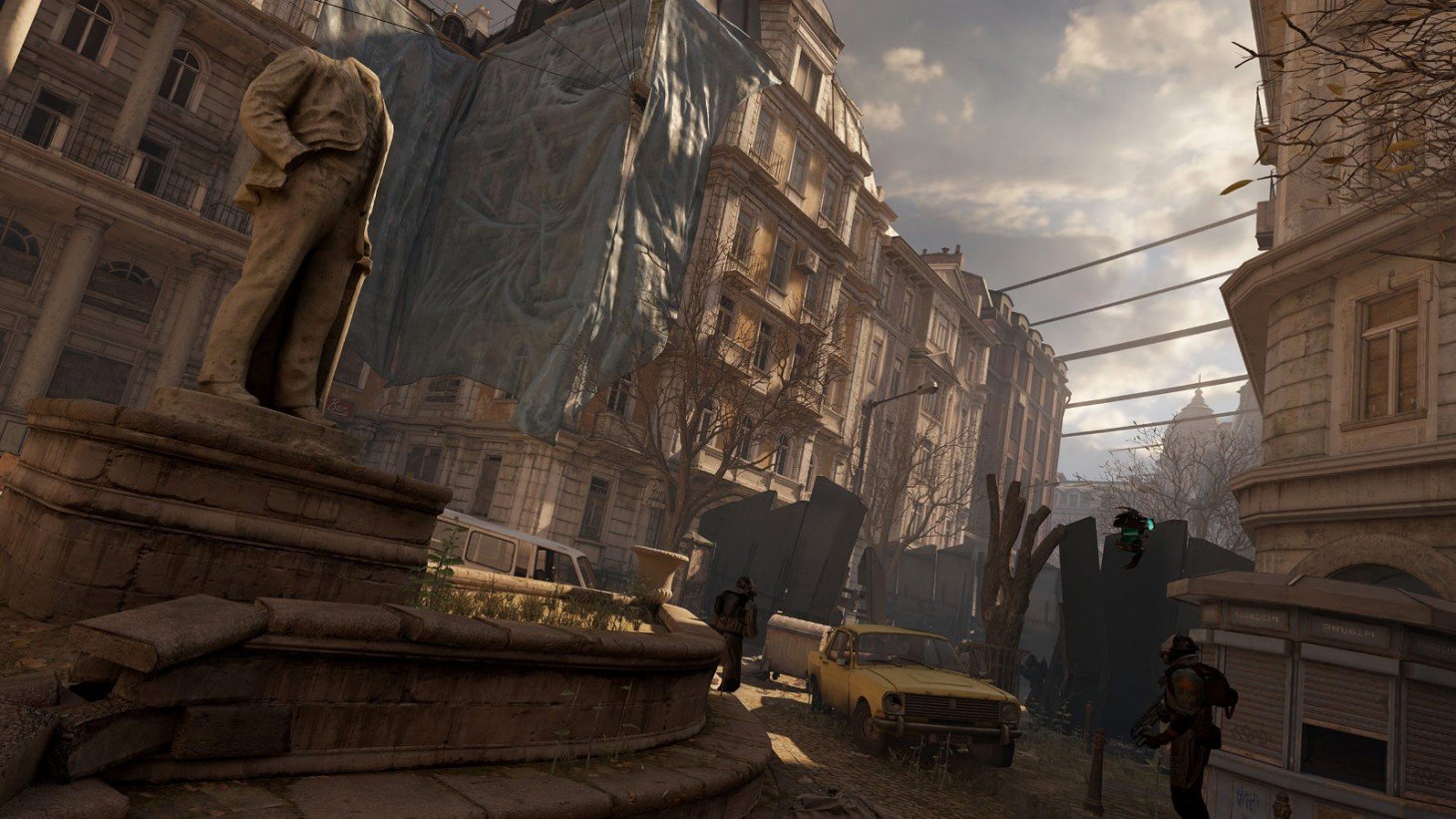 I still can’t believe I played a new Half-Life game. It took Valve long enough, but we’re here. And yes, it does feel like a new Half-Life, thank you very much!

This is 2020: we’re past the era where high-profile VR games are assumed tech demos, as some recent big names have shown us. Valve is equally up to the task with Alyx, and gives us one of the most technically impressive VR games to date, especially on a high-end rig. Even something as simple as looking up at the sky through glass in its opening moments will be enough to elicit a jaw-drop from veteran VR players, and of course, those who are coming into the hobby blind. Ha, through the looking glass! I’m going to be super vague here on story details as I’m sure a lot of you have been walking on eggshells around Alyx coverage.

Whether or not you’re new to VR, Alyx is extremely accessible with four difficulty settings and three movement options, all of which can be swapped at any time. Even if you go for full locomotion (read: FPS movement with the left analog stick), a clever use of a “jump” teleport mechanic allows you to easily re-orient your setup without having to back out into a main menu. Playing standing the entire time (I need to be able to instantly turn around!), it’s one of the most comfortable VR experiences I’ve had the pleasure of being a part of.

You know what’s uncomfortable (in a good way)? How creepy this game can be at times. You’re not just fighting the Combine threat (which, to be frank, is a bit old at this point but they’ll do), you’re navigating droves of Xen creatures like Barnacles, Headcrabs and Zombies. Seeing all of these up-close, right in front of your face, is enough to scar some people for life, and frankly, reinvents them for a new era. I literally don’t even look up when I get caught by a Barnacle, preferring to blind-fire my pistol at them: I hate them that much. Out of the 100+ VR games I’ve played in my lifetime, this is one of the most terrifying worlds I’ve been a part of.

The story is a mix between things you’ve seen before and new developments. A [speaking] Alyx is the main star, which is possibly the most new thing on offer, but there’s plenty of mostly tasteful fanservicey things sprinkled in. You have to give it to Valve though, it all feels authentic, even minute gameplay choices. Puzzles rule in Half-Life: Alyx, and I’m not even talking about the typical “hand crank” or “button pressing” literal puzzles.

You can grab a giant barrel with two hands and chuck it at something then run away. Or you can stack boxes like that one scene from Home Alone 2 (“solid as a rock!”) to get somewhere. All of that, which requires no jostling and no UI, is accomplished by moving your hands around in the VR space, or by naturally grabbing and flicking items toward you with your Gravity Gloves.

So I’m coming at this from a different perspective on the technical side, which is partly why we have two reviews. I own every current major VR headset on the market, and have been playing VR games consistently since 2016. While Valve knocks it out of the park in the story department, they still have work ahead of them when it comes to VR controls. Again, Valve did a great job here, but I have a few hangups.

A lot of current VR designers are getting away from excessive menus, in an effort to keep inventory management more natural. So when you need a pistol, you grab it from your hip. If you need a shotgun, it’s on your back, and an SMG is on your chest; that sort of thing. In Alyx, you need to navigate a small “+” shaped menu with a button press to swap between those three aforementioned weapons and your multi-tool (which plugs into stuff and solves puzzles). When you’re walking around, it’s an annoyance at worst. During the heat of a really intense firefight, it can be a problem and hamstrings fluid combat.

That said, the two-hand system is extremely versatile, and squeezing a grenade with the Index remotes or triggering individual finger movement is wild. There was one moment where I was sticking my hand into a med bay for healing, and using the other hand to grab items in that same room while looking around. That’s not something you can typically do in a non-VR game, and Valve did right by the modern VR fantasy. It feels justified as something that needs to be VR. Just a word of warning: if you’re using the Index, charge your controllers between sessions! This is a long game (my first run took me 10 and a half hours, with a near 100% completion rate) and those things can run out of juice after a long session.

My Half-Life: Alyx experience can best be described as “joy.” Joy found in playing another Half-Life for the first time in…forever, and joy found in natural puzzle solving. This is legit, folks. A 10-12 hour Half-Life might finally be enough for you to spring for a VR headset. 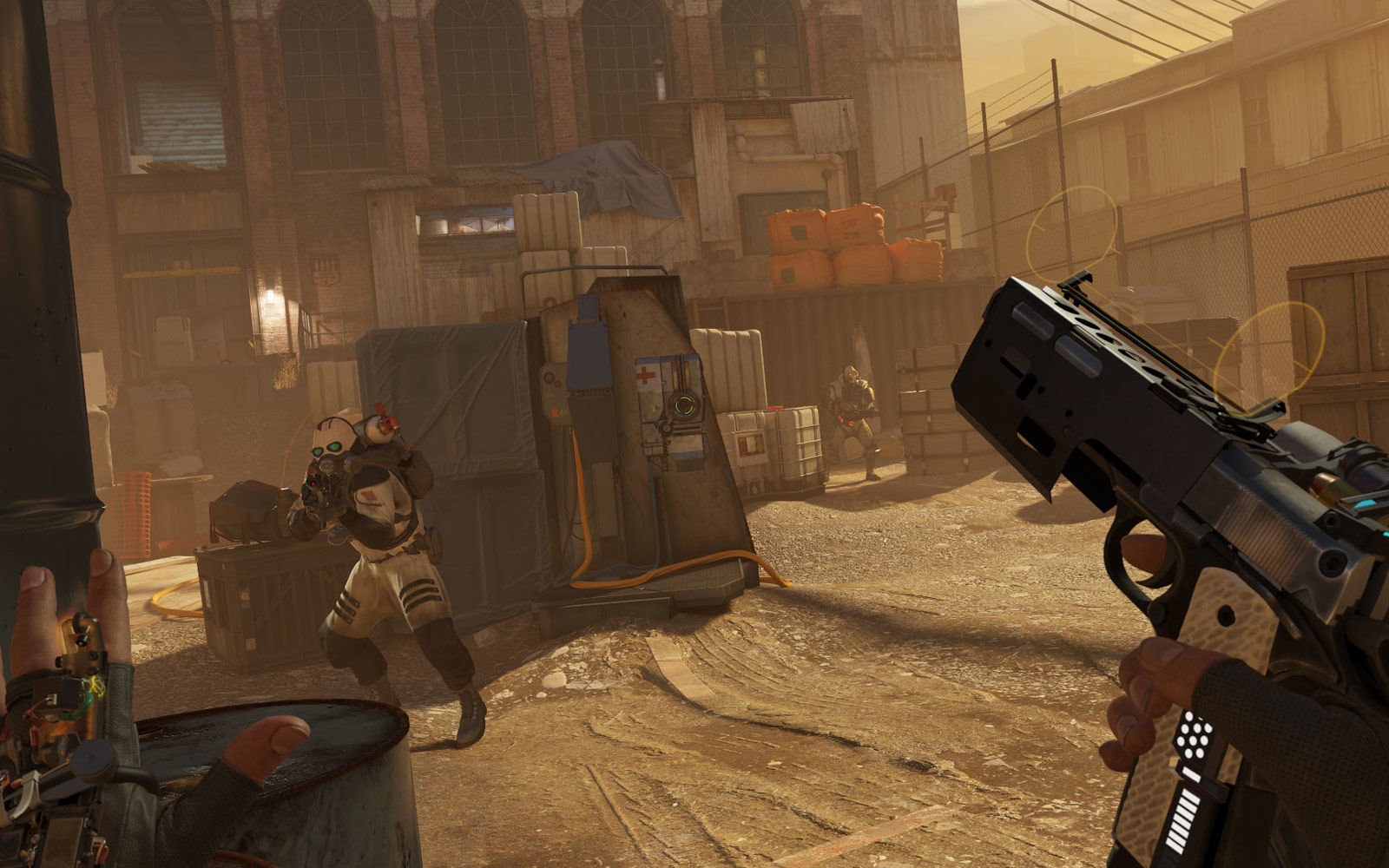 Half-Life: Alyx is a Half-Life game. That’s a sentence I was terrified I wouldn’t be able to write. I was worried –convinced nearly — it’d be a glorified tech demo or an impostor wearing a Half-Life mask. As it turns out, a silent man wielding a crowbar is not necessarily criteria for a Half-Life game.

Sidekick extraordinaire Alyx Vance slides into the star role’s spotlight like she had been the lead woman all along. Passed the torch (crowbar?) from Gordon Freeman, Alyx leaves her own mark on Half-Life, providing observational commentary and occasionally chatting away on a two-way radio. It’s natural and fitting. Valve deserves credit for having the confidence to pull off a protagonist swap, especially considering how strongly and passionately people associate Half-Life with Freeman.

However, Valve’s greatest accomplishment with Alyx is that it managed to craft a narrative that’s essential to the Half-Life canon. This isn’t an inconsequential side-story of different people in a different time. (Remember: It takes place prior to the events of Half-Life 2.) It cleverly interjects itself into existing storylines, filling in gaps and giving new perspectives. Starting with Alyx out to save her father (Eli Vance, the name probably rings a bell) after he’s abducted by the Combine, it quickly unravels into a whole bigger thing. Alyx is such an indispensable Half-Life game that I legitimately feel bad for any fans who are without the means to have a virtual reality setup. 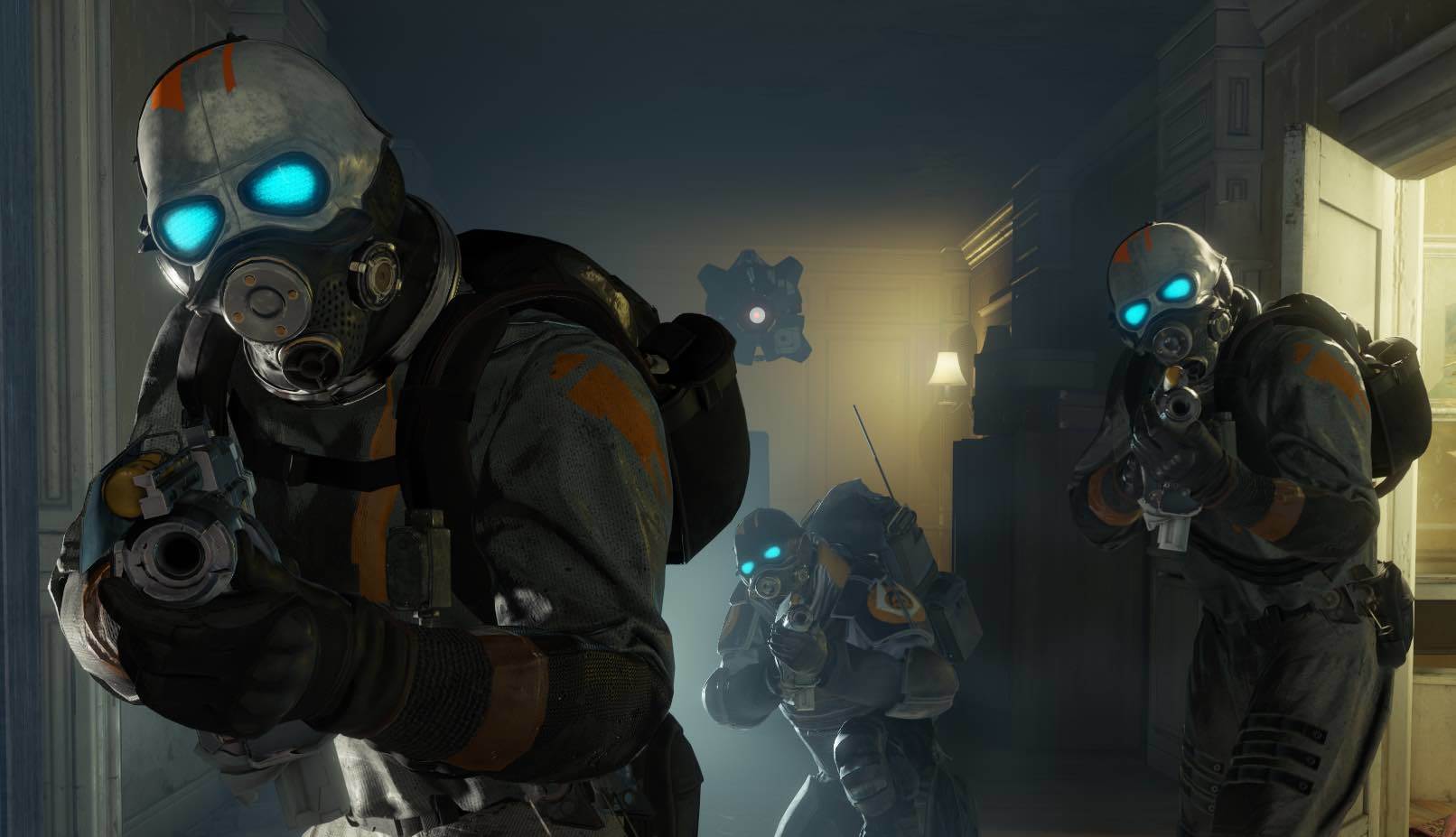 It doesn’t take long with a helmet strapped to your head to understand why Valve was so insistent that Alyx be a VR game. VR truly elevates Half-Life, bringing the world of City 17 alive in incredible ways. The opening minutes had me fascinated, watching Combine patrol units police the streets. That fascination never waned, whether it was carefully peeking around rafters to look straight up at a barnacle’s horrific maw or knocking around the heads of now twice-dead zombies like the psychopath I am.

That immersion, VR’s inherent ability to place you inside worlds, is what makes Half-Life: Alyx so special. In the 15 hours it took me to get through the campaign — I evidently played much slower than Chris — I never once felt at ease. I had plenty of flashbacks to Resident Evil 7, as I dreaded every upcoming encounter and scrounged for resources that always seemed in perfectly short supply. More appropriately, Alyx constantly conjured memories of Half-Life 2‘s Ravenholm. We don’t go there for a reason. Alyx is a masterclass in unnerving environment, and the whole thing is just so fucking intense.

Virtual reality can be a double-edged sword, even if the pros definitely outweigh the cons. Valve implements an awkward weapon-wheel menu that can lead to unintended weapon swaps. It’s frustrating to fail thanks to your own flailing during battle or when a particularly feisty headcrab sends you into a panic, and you switch to the wrong gun and it’s out of ammo. Also, the limitations of VR are evident in the design as Half-Life: Alyx rarely sends you into large-scale battles. It’d be too calamitous and disorienting to have bullets flying at you from all directions, so Valve usually confines Combine fights to waves of three. It’s still intimidating. 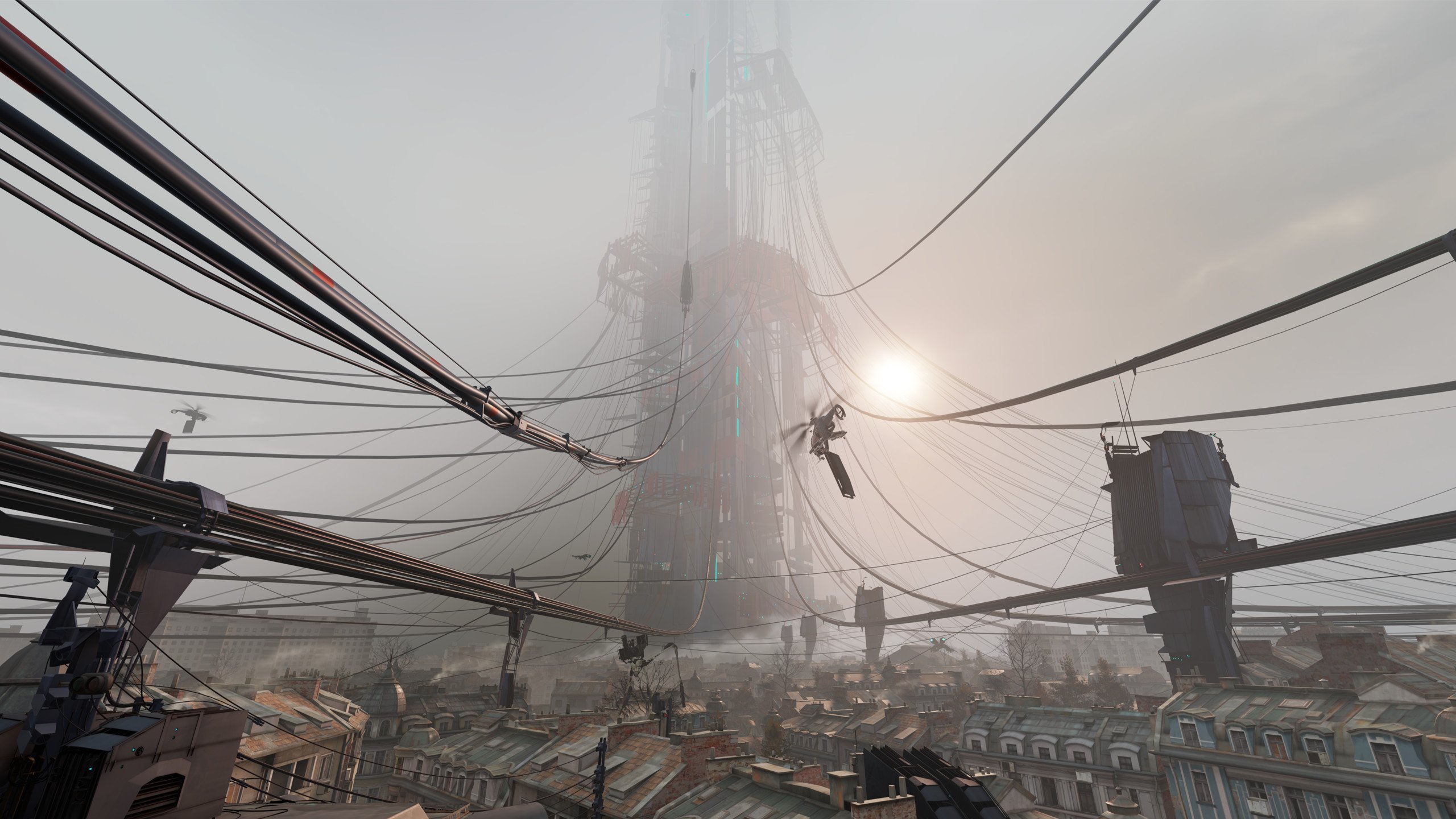 There are also obvious seams where Valve designed Alyx to cater to innovative interactions that VR affords. For instance, a new alien flora is introduced out of nowhere in service of framing a later chapter around using the tracking controls to avoid a hazard. It comes off as neat if not a little gimmicky. Don’t worry: The rest of that chapter is superb in every way.

Although I didn’t play on the Valve Index, which Alyx was specifically developed for, I didn’t notice any real drawbacks to playing on the Oculus Touch controllers. It quickly becomes second nature to use the triggers for the Gravity Gloves to coolly fling things toward you, catch them, and then toss them. You’ll do this many times, and you’ll eventually feel like a badass when it’s effortless and smooth. Oculus Rift with Touch controllers is a perfectly suitable and valid way to play, and that’s presumably the case for the other compatible VR headsets.

Half-Life: Alyx is an accomplishment no matter which way you spin it. It’s a technical marvel as a generally excellent VR game. It’s a narrative triumph in how it brilliantly navigates a new protagonist to add vital pieces of canon. And, it’s an incredible adaption of a cherished series to a platform that does nothing but enhance what makes it special. As I took off my headset for the last time, I found myself thinking Valve can’t keep us waiting another decade-plus between games. Half-Life: Alyx reinvigorated my love for Half-Life. We can only hope it similarly reinvigorated Valve.