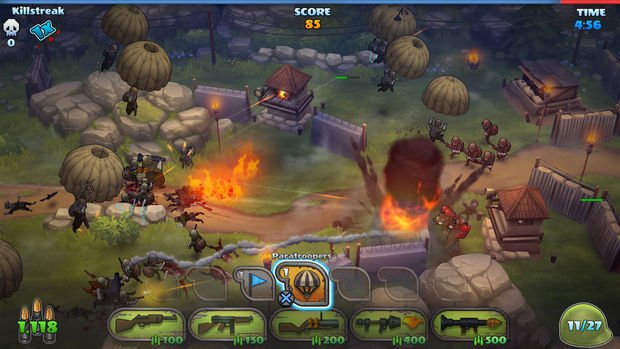 Guns Up! is Boom Beach for your PlayStation 4. This tower offense/defense game tasks you with creating an impenetrable base and building an unstoppable army. To do both you’ll need munitions, the in-game currency. You earn munitions by successfully attacking bases other Guns Up! players have designed over and over and over again. And then again about 500 more times. And then six more times after that.

Attacking player bases revolves around you selecting your troops, sending them into battle and supporting them. “Support” takes the form of randomly unlocked specials on the field and from support cards you use before each attack begins. The experience is passive at best. You have no direct control of your troops outside of a few of the aforementioned specials that will force them to attack specific structures or move them to a spot on the battlefield. But once they destroy that object or reach that spot, soldiers revert back to their pre-programmed A.I. which can only be described as Gomer Pyle-esque.

Other Guns Up! players cannot directly defend their bases from attacks. It’s their base design versus your army. After about 45 minutes or so, I realized it’s the same base design virtually all the time. That’s because most players have realized the ideal set-up involves bottlenecking your opponents into a tight space with a turret at the end to mow ’em down. Couple this with the fact there is just the one Eastern Bloc countryside-inspired setting for the game and all the bases began to blur into one another.

Attacks can be completed in as little as 90 seconds. With the right combination of specials (like missiles, tear gas and fire bombs) and sending wave after wave of your own men to die Zapp Brannigan style, it’s easy to overcome most challenges. Yes, the game does get more difficult as you level up and unlock more difficult bases, but there was never a feeling of accomplishment when I claimed victory at a higher level. There also wasn’t a feeling of determination to try again when I lost. Instead the only feeling I got playing through this was a feeling of indifference.

Success in battle rewards players with munitions and cards that range from battle support to perks for your soldiers. The munitions you win are used to build and expand your base. I nicknamed my first base layout “Tila Tequila” because it was small and easy to penetrate. My base grew as I leveled up, but a limited number of build points kept me from creating something that could stand up to player attacks. The number of successful defeats of invading armies didn’t start to grow until I adopted the same bottleneck design that everyone else was using. To be successful, my base had to look just like everyone else’s.

Guns Up! is free-to-play and one of the first questions I had about this game is if it’s actually free-to-play. While I was provided $10 in credit by the publisher for this review, I didn’t find the need to use it until several hours into the game. By that point, I had already grown bored of playing the same goddamn map over and over again and just spent the money because it was something different to do.

Players can’t spend their way to the perfect base as you can’t buy munitions directly, but spending money can help you progress more quickly. Money is converted to gold which can be spent renting soldiers you haven’t unlocked, customizing the colors and logo of your army, and purchasing card packs. You can also spend that money purchasing soldiers you have unlocked as simply unlocking them doesn’t instantly add them to your repertoire. Instead, the game gives you the option to spend a couple bucks worth of gold or an ungodly amount of munitions to get them.

It was at level 16 or so that I finally did spend that money because progress had slowed to a crawl. Leveling up was taking forever and expanding my base became too damn expensive. If this game were fun I would have toughed it out. But it’s not fun, so I spent money on XP and munitions boost cards that would make the un-fun game easier to play. These cards, which are also included in a PlayStation Plus bundle (it’s free for PS Plus users), killed any incentive for me to take on more challenging bases as defeating a lower level base netted me enough XP and munitions to progress at a steady pace.

Okay, that’s a lie. The only real incentive I had to continue on after I had seen everything the game had to offer in the first 30 minutes or so was the fact that I foolishly volunteered to review it. Guns Up! is a dull game. It’s repetitive, it’s tedious, it’s digital Ambien. If the thought of a console version of Clash of Clans excites you, you’ll probably have a blast with Guns Up! Me, I can’t wait to delete this off my PS4.

[This review is based on a retail build of the free-to-play game. A currency code valued at $10 was provided by the publisher.]