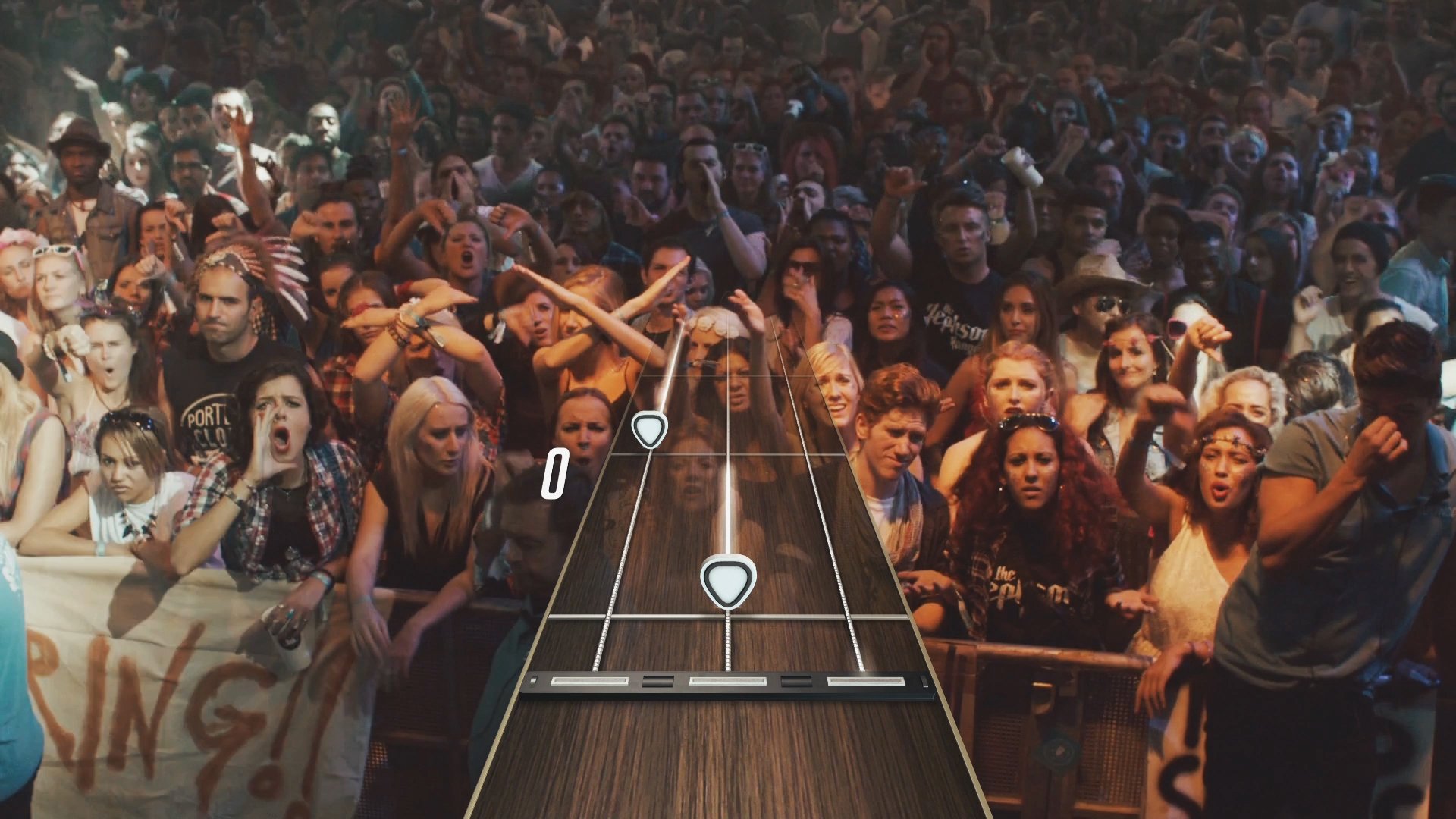 An axe to grind

As I’ve said many times in the past, I was a Guitar Hero man all the way up until I first laid eyes on that beautiful keyboard for Rock Band 3. The Hero series was stale, iterating annually (sometimes multiple times in a year), and assisted in the great plastic market crash a few years back. Meanwhile, Harmonix cleverly used its game as a unified platform, and stuck to providing DLC support.

Years later though things have changed. While Rock Band 4 is content with giving you more of the same, Guitar Hero Live completely reinvents itself, for the better.

The first thing you’ll notice about Guitar Hero Live is that the controller itself has been reworked. Now, instead of the typical color-coded five button setup, you’ll find two rows of three buttons — one row is white, and the other, black. I didn’t realize this until later on, but it’s actually easier for newcomers to pick up since you don’t have to use your pinky finger at all, but tougher for veterans who are used to a 10-year institution of the same old setup.

Honestly, I loved having to relearn everything I knew. While I was rocking it out to expert-level songs in Rock Band 4 immediately after years of retirement, it took me multiple days to get a basic grasp on Guitar Hero Live. It recreated that unique feeling of picking up a plastic guitar for the first time. It also helps that Live has five difficulty levels (basic, casual, regular, advanced, and expert), that all ramp up perfectly depending on your skillset. It’s especially important to note that the former settings only require you to use one row of buttons, which will help you slowly acclimate to the new setup.

As time went on and I started jacking up the difficulty, the game gets crazy tough. There’s a major focus on one-finger vertical cords, as well as split cords with multiple combinations, and open strumming cues with no buttons. It’s far from a realistic guitar simulator, but I really dug the increased emphasis on chords and fancy finger-work. It may feel like a step down at first glance, but there’s a lot of depth found in these six buttons. The chief reason why FreeStyleGames was able to seemingly perfect this aspect of the game is because Live is guitar-centric again.

Yep, there’s no drums, no keyboard, no “bass” ensemble — both players play lead guitar. There is the option to hook up a USB microphone to sing vocals, but they are absolutely ancillary to the experience, and I wouldn’t recommend picking up the game for singing in the slightest. Technically, vocals add in support for the third player, but Live is definitely focused on the same one or two-person jam session that the original brought to the table in 2005. Again, I’m totally okay with this, as the series started to get stale when it tried to be too much like Rock Band.

There’s also a fundamental shift with the story mode, which no longer displays lifeless uncanny valley avatars strumming along to the song. Instead, the developers have recorded live footage with real bands playing each song with a live crowd, and strapped a camera to the lead guitarist to simulate a first-person view. Yes, it’s FMV, but the end result is done so well that it blows past the Mad Dog McCrees of old.

For each set (three songs), your character will start backstage. Here you’ll get a bit of setup, perhaps some light drama, a quick chat with a stagehand, and on occasion, a visit from a makeup artist. It helps set the scene and gives you the basic gist of what it feels like to walk out onto a stage in front of thousands of people. As the song progresses, the camera will dip and dive across the stage with your character. Now here’s the neat part — depending on how well you play, the FMV will shift in a surrealist fashion to suit the situation.

For instance, playing well will net you a cheering crowd and lots of smiles from your fellow bandmates. Playing poorly will shift the FMV into a negative state, with shaking heads and plenty of boos from the audience. It’s such a little thing, but the band itself will start giving you a hard time vocally as well, which is jarring and motivating at the same time. I’m not going to act like this system elicits any kind of actual emotional response, but it’s very cool to watch and it’s seamlessly done. I’m genuinely surprised they went through the effort of essentially recording two entire concerts for each set of songs.

The included setlist itself is rather diverse, consisting of classic rock songs from Queen, The Who, and The Rolling Stones, alongside of more modern groups like Green Day and Fall Out Boy, all the way up to Skrillex (“Bangarang” works better than you’d think) and a recent Eminem song (“Berzerk”). It has something for everyone, with a good spread of indie hits, folk music, and top 100 joints. While the actual story mode is only playable solo, there is a freeplay mode with all 42 on-disc tracks that you can enjoy with a partner, which also features the FMV setup.

So that’s the first half of Guitar Hero.

Next up is the other half: Guitar Hero TV (GHTV). As you may have heard, this concept is going to be rather controversial in nature, as it features microtransactions, and a “stream-centric” DLC model where you can’t actually buy songs, but play them on-demand. I fully expected to hate it based on concept alone, but to my surprise, it’s probably one of my favorite modes in any rhythm game to date.

Let me explain a bit — GHTV is a multi-faceted affair. At its core is the “channel” system, which currently hosts two playlists. These shift every half hour with new tracks and genres, and quite literally follow the traditional television model, where everyone is playing the exact same thing at the same time, complete with leaderboards. In other words, if you boot it up, you may be jumping in mid-song into a competition. This aspect of Live is devoid of microtransactions. You can play both channels for free without paying Tokens (more on that later) as long as you want.

And that’s just what I did for days on end. During one of my testing sessions, I played the channel system for three hours straight, earning Tokens for on-demand plays along the way. Since this system is curated, I stepped out of my comfort zone, and discovered new bands, or played songs that I wouldn’t normally play from bands I already knew about. It broke the typical rhythm rut where I’d only play my favorite tracks, and it’s a really cool feeling.

GHTV also has the added benefit of hosting music videos for every single available song. As someone who grew up with MTV, it was a joy to watch them all over again, especially classics like Tenacious D’s “Tribute.” It’s also a lot more fun to watch music videos as a spectator compared to the aforementioned uncanny avatars. Since the channels are going to be constantly updated over time, I’m excited to see what the future holds.

The other side of GHTV is on-demand and features microtransactions. Here’s how it works: for each track played, you’ll earn Tokens. If you do poorly, you’ll earn roughly 100-130 Tokens on average. If you do well, you’ll net close to 200. You can also earn daily rewards for logging into the game and bonuses for ranking up. One on-demand play is about 600 Tokens, and there’s also the option to buy cosmetic bits like new note highways and player cards. Finally, there’s a “Party Pass” for $5.99 that grants you access to the entire TV catalog (hundreds of songs) for 24 hours.

Here’s the good news — you can basically ignore all of this nonsense if you play the channels. Personally, I put in over 20 hours into GHTV and haven’t felt compelled to spend a cent, with 70 spare freeplay sessions banked. You might not feel the same if you hate the principle of not owning content, but as a regular subscriber to streaming services such as Netflix and Hulu, it’s not a difficult concept to grasp. While GHTV has the potential to turn a lot of people off, I would be satisfied just playing channels for the immediate future. Both the channels and on-demand support two players.

Guitar Hero Live completely took me be surprise. I love the new controller design, the FMV portions work far better than they should, and Guitar Hero TV hooked me with its channel concept. Going forward, I’m hoping that the model further reinvents itself by introducing the world to new music.

[This review is based on a retail build of the game provided by the publisher, specifically, the dual guitar package.]