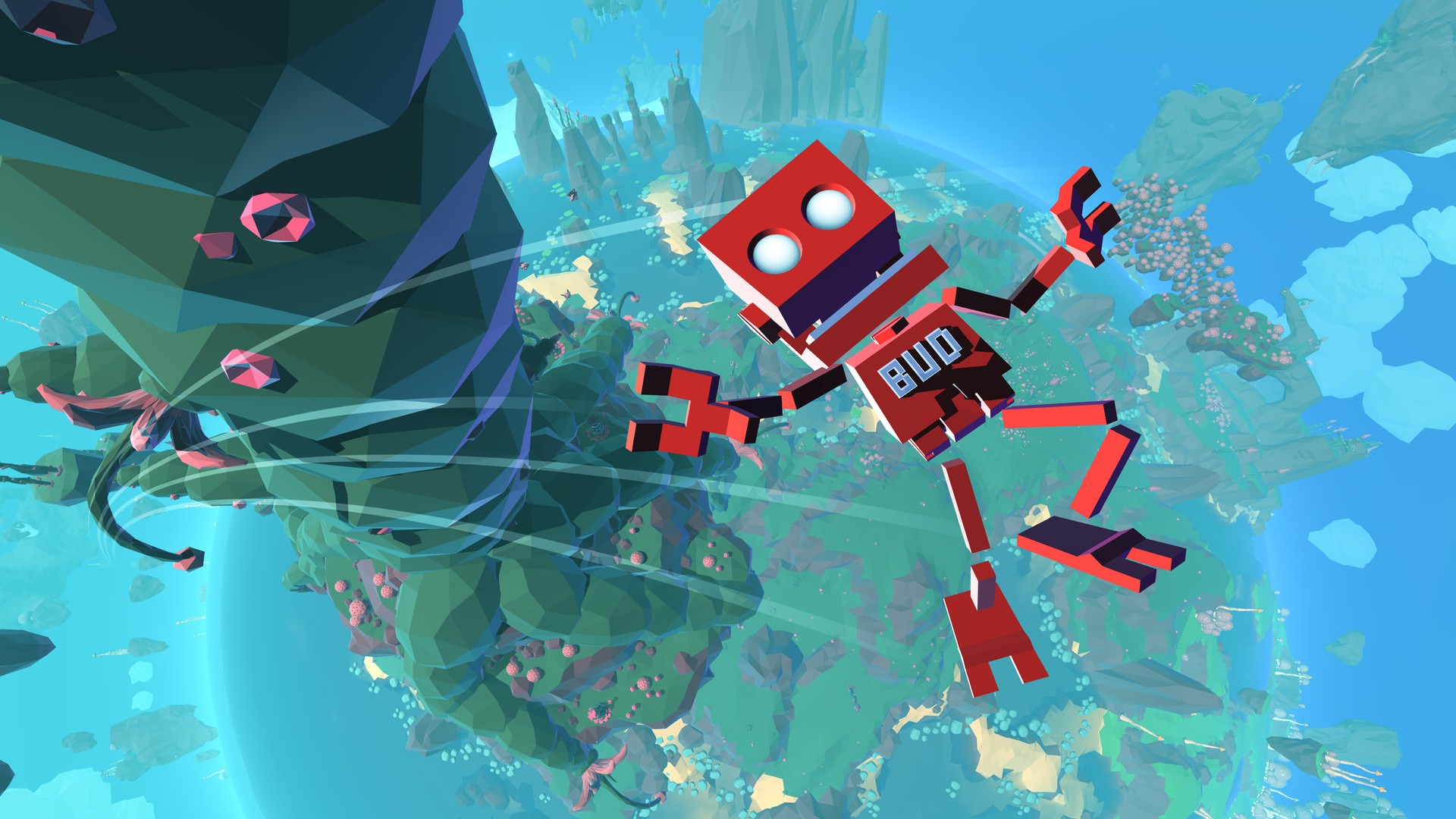 In many ways, Grow Up is the quintessential Ubisoft game. It’s rife with the systems that have come to define the French publisher — specifically an open world and a ton of collectibles. Actually, that’s basically the entire makeup of Grow Up. Go everywhere and collect everything.

Somehow, it’s far more bearable when the pretense is stripped away. 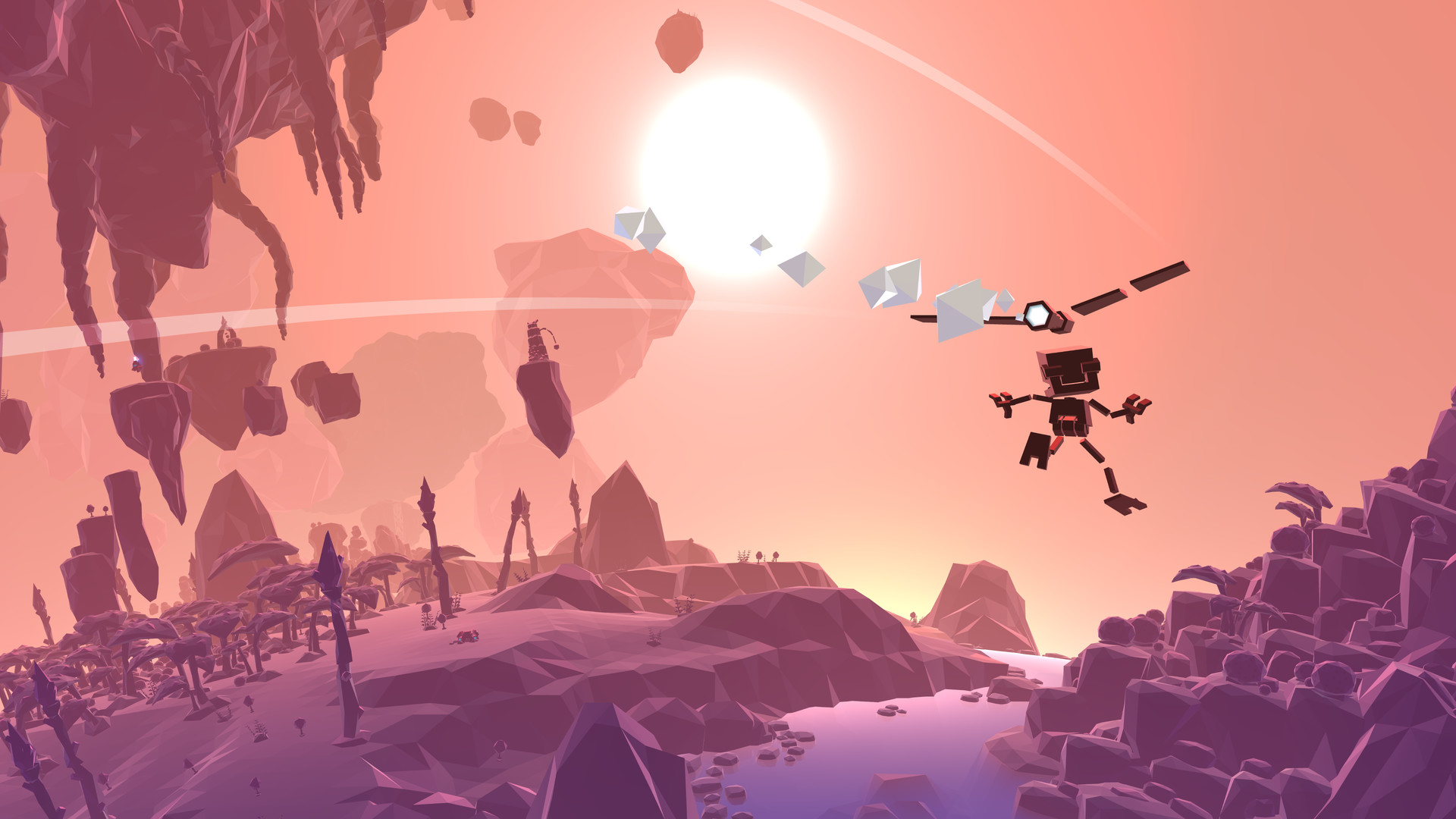 That is to say, Grow Up doesn’t really posture all the collecting as if it’s in service of a greater good. It’s just a little robot exploring this incredibly vertical space. There are things to grab — some of them to advance the narrative and others make further exploration far easier — and that’s the game. There’s no veneer as if Grow Up tries to pretend it’s something grander.

What little story there is can be described as “BUD and mostly-unseen sidekick POD (two acronyms denoting that they’re definitely robots) set off to save the recently-crashed MOM (another acronym denoting that she’s definitely a robot). Gathering nine ship parts is technically the core of the agenda, but there’s never any real urgency to consider. MOM will be fine whether it’s done immediately or just whenever you get around to it.

All this collecting proves itself immensely useful because it’s vital to the upgrade loop. At the beginning, BUD is a clumsy, barely-capable mess. Getting around is a chore, as he ragdolls and slips over the edges of platforms. Ascent is mostly limited to hand-over-hand climbing, a plodding and tedious method of traversal. This is the introduction to Grow Up, and it’s not a good first impression.

It all gets substantially more tolerable as more things are found. New abilities ease the burden of going ever upward. Additional power supplies mean that those abilities become more productive. Teleporters instantly transport BUD across the world. All the collectibles have a tangible and lasting effect on Grow Up‘s progression. Now, that floating island doesn’t require an efficient and meticulous route to get to. The jet-powered glider can probably get there in a matter of seconds.

This is especially important because, apart from making the game easier, it lends a real sense of advancement to BUD’s journey. As he scours the world, he becomes a stronger character — mechanically, not emotionally (he is a robot, after all). Maybe this is where the game’s title “Grow Up” came from. Or, maybe it’s just the next logical phrase for a game that’s the successor to Grow Home and is all about going up.

Whichever it may be, Grow Up‘s once-expansive setting suddenly seems relatively small by comparison. It’s an interesting realization that the scale of this world isn’t what it once was. Conveniently, being able to get anywhere quickly helps mitigate the game’s shortcomings such as frustrating camera control, platforming that feels loose and unpredictable, and a map that’s rendered useless by the emphasis on verticality.

Those are the issues that are easy to pin down. But really, Grow Up suffers from all the downsides of not giving the player structure. It just feels like less of a problem here because the developer is wholly transparent about that fact. Grow Up is as Ubisoft as a Ubisoft game can get. It may be a lot of bloat, but at least the game’s comfortable enough to carry it proudly.