Grim Fandango didn’t need a remaster as much as it needed a re-release. Many, myself included, have found it difficult to track down a copy to play. We’ve had an entire digital catalog–GOG.com–devoted to getting good, old games up for sale on a digital storefront, but no Grim Fandango?

The touch-ups are appreciated. You can switch between the original and remastered look at the touch of a button. The latter has some nice dynamic lighting and new character models, but I stuck mostly with the former for its more vibrant colors. The in-game commentary is a nice touch. The non-tank controls are welcomed (as is the cheeky trophy for playing with tank controls).

No bones about it, though, Grim Fandango holds up on its original merits as a stylish, humerus adventure. 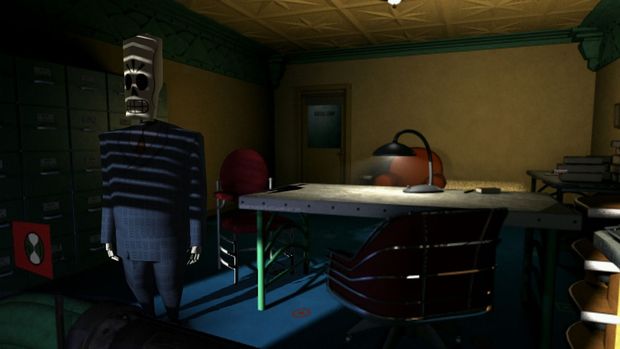 Manny Calavera is a grim reaper, which in this art deco Land of the Dead means he’s a travel agent, sending dead souls to their final resting place through a variety of fine travel options. Most prized is the Number Nine, an express train reserved for those who’ve led sterling lives. Manny isn’t one of them, which is why he’s working off his sins as a reaper, but a string of bum, low-commission clients has him treading water in this literal limbo.

I love bread–okay, I knead to stop with the bread. Grim Fandango is so playful, though, it gets me into a good mood. This is a world of travel-agent skeletons, giant cat races, and biting birds that comes off so comfortable you almost wonder why anyone is making miles towards the afterlife. Of course, it’s an easier stay for the enterprising Calavera than the poor souls trekking for years on a walking stick.

Then again, it’s all about the journey. 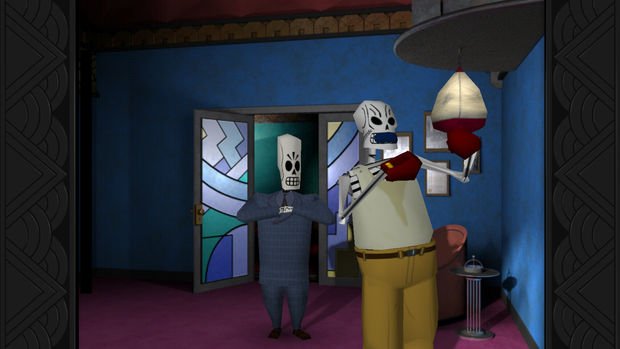 Grim Fandango is stuffed with sharp dialogue and you’re encouraged to go through all the options, a bit of quick unlearning needed if you’ve been on a “he will remember that” diet of choice-heavy adventure games. Nothing feels throwaway, though. It’s gags, pertinent information, or, more likely, a mix of both.

The economy is impressive. Ancillary characters will reappear over the lengthy journey and it feels like seeing an old friend. It is not massive in the open-world, “you can walk to those mountains” sense, but it manages to feel both full and intimate, like a warm dinner in small, friend-filled kitchen. Tony Plana deserves enormous credit for voicing Manny and making even repeated item description lines feel natural.

About the only thing in Grim Fandango that isn’t bleached-bone smooth is its puzzles, which are bound to trip you up eventually. For me it was a mix of my failed lateral thinking (stupidity) and the means of interaction. On the Vita, point-and-click with the touch screen works best in puzzle-solving situations, though I still ran about mostly with traditional controls.

One puzzle had me using my scythe and in doing so with the X button, Manny just kept waving it around in the generally correct area. Clicking on what must have been a slightly different spot with the touch controls and opening the UI allowed me to progress. Wildly tapping until the UI pops up is also the best way to take stock of what you can interact with in an area, rather than relying on button clicks and Manny’s neck craning towards objects of interest. PS4 users might face an added challenge sans touch controls. On the technical side, I did experience a couple crashes on Vita and one instance of Manny getting locked in place that necessitated a restart, so remember to save often. 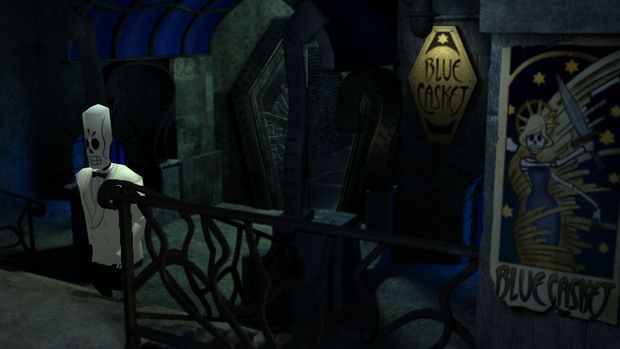 Figuring out how you’re supposed to interact with something probably falls somewhere in between stupidity and means of interaction. Having to replace an item you might have picked up before essentially combining it–without any sort of traditional inventory screen and “combine” option–broke my brain a bit. Luckily the game is 17 years old and you can do a little cheating if your conscience can take it.

The comedic beats Grim Fandango hits in the opening cinematic alone are delightful. Reminds you how rare “funny” is in games. Some adventure game puzzle logic and Glottis’ chunky orange polygons aside, it doesn’t feel dated. It’s well-written, rich, heartfelt, funny, and I’m glad as heck it’s readily available for everyone to play.

[This review is based on a retail copy of the game provided by the developer.]