Working for the man every night and day

Several years ago, I used to work at a toy warehouse. It was a lousy job with lousy pay and lousy holiday hours. But it also provided me with a lot of downtime, and in that time, I’d often daydream about hopping in the forklift that sat collecting cobwebs in the far corner of the warehouse and destroying that building piece by piece.

Of course I never actually did that, which is why I write for Destructoid and not Prisontoid, but those types of tear-it-all-down fantasies still stick with me, even now that I’m at a job I love. And while I may never be able to make those fantasies into a reality, I can at least simulate what havoc I’d wreak with Good Job! 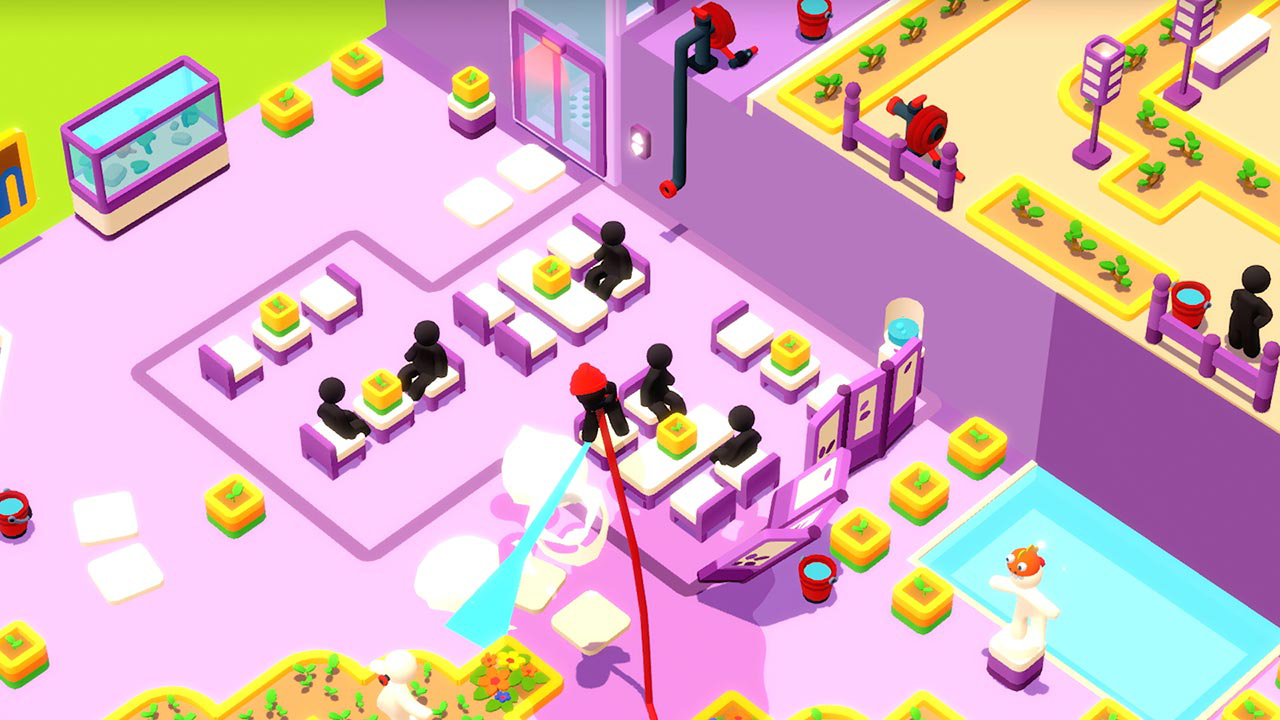 Taking place at a company headquarters that’s rife with OSHA violations, Good Job! casts players in the role of the boss’s kid as they work their way up the corporate ladder. The opening montage of the kid and their parent together is actually quite touching given everyone in this game looks like the guy from the crosswalk sign. The kid is tasked with completing a set of assignments on each floor, starting easy by moving projectors and cleaning floors before eventually being assigned more important tasks such as hanging art and guiding a gelatinous cube around a factory floor.

While it’s never fully explained what it is this company makes, it’s quite evident from the start there are two ways to go about completing each assignment. Because the first thing you’ll probably realize about Good Job! is that this is one fragile facility. Everything is prone to breaking with the slightest of taps. Flasks of water, computer screens, even hazard cones will break if you’re too careless. So you’ll have to decide if you want to take it slow to get it done right, or throw caution to the wind and breeze through each task as quickly and as recklessly as possible.

While there is a way to complete each task in Good Job! without breaking anything, thus securing the “S” ranking for that room, it’s far more entertaining to treat each challenge like it’s a party you’re throwing at somebody else’s Air BnB. And don’t worry, because you’re the boss’s kid, nobody will ever get mad at you. From slingshotting copiers through walls to unleashing a firehose on an unsuspecting set of cubicles, there is a lot of opportunity for mischief and mayhem on each floor. New tools such as forklifts, cleaning robots, and floor buffers only add to the antics, but you can’t just solve every challenge by tearing the place to shreds. There are small logical puzzles you’ll have to solve by observing the actions of the other people on the floor.

Each floor houses four different rooms you have to complete and you’re scored based on your completion time, how many items you broke in your attempt, and the cost of the items you broke. It is possible to break a single item and have it cost $5, like a clipboard, or have it cost $10,000, like one of the many golden vases you’ll find in the most inopportune locations. It seems the scoring mechanism will take whatever your highest rating is in the three categories. So if you blow through a challenge in less than a minute securing an “A” ranking, but break 78 things worth $94,000, you’ll be awarded the “A” as your final score.

You can secure an “S” ranking by completing  each challenge extremely fast or with extreme care. For the latter, you have to take it slow. In fact, take it very slow because the one hiccup I found with Good Job! is that it doesn’t do a good job of identifying the item you’re trying to grab. Nearly everything you see at this company can be picked up or pushed and pulled. With the physics engine at play here, pulling something too hard might send anything stacked on it, such as books in a bookcase, crashing to the floor to break. If you’re being as careful as can be, you’ll want to remove the individual books first before moving the bookcase. However, when you stand in front of the bookcase, it’s a crapshoot on whether or not the game will correctly highlight the item you’re trying to grab. And if you move that thumbstick even slightly, it can completely target the wrong object.

I had many attempts at a perfect ranking ruined because I inadvertently picked up a box when I meant to pick up the object sitting on top of the box, which ultimately broke when I moved the box. This inability to switch between targeted objects with a press of a button only becomes more irritating the more I climb the corporate ladder. The worst example of this happened on the second-to-last floor where there were so many objects in one space I literally had to stand my character next to the thing I wanted to grab but face them in the opposite direction just to get it to recognize the correct item.

If you want to get the most out of Good Job!, forget trying to get the best score possible and just have a blast wrecking up your dad’s company as this commentary on nepotism slowly plays out. That’s when the game is at its best. Save those “S” rankings for a second run through.