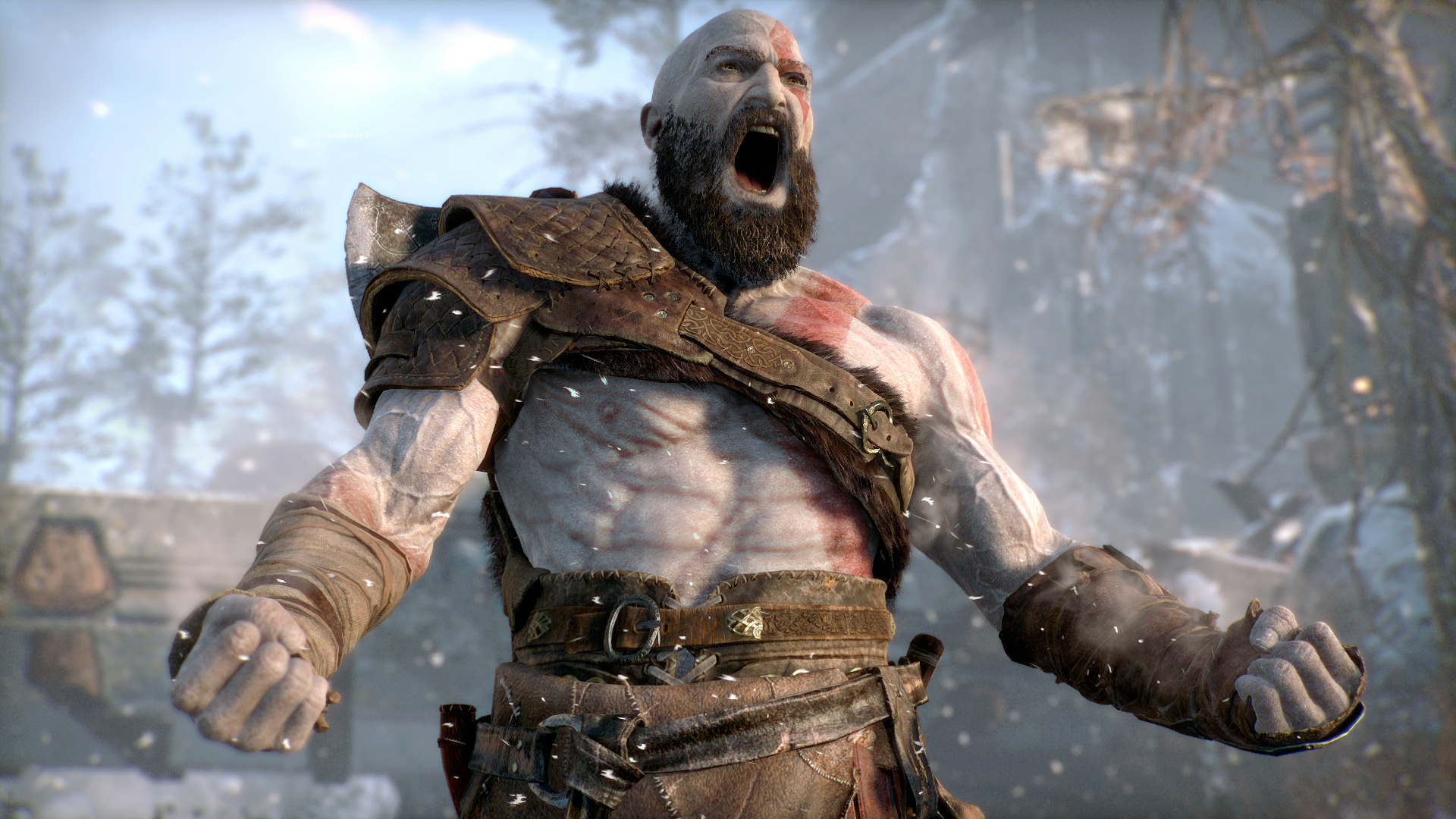 Atreus is my son

I was highly skeptical of the soft God of War Norse reboot. I’m always willing to give something a shot, but taking the fast and frenetic combat of the original series and slowing it down to focus on a father and son relationship? It’s a bold and risky move.

One that paid off in spades. 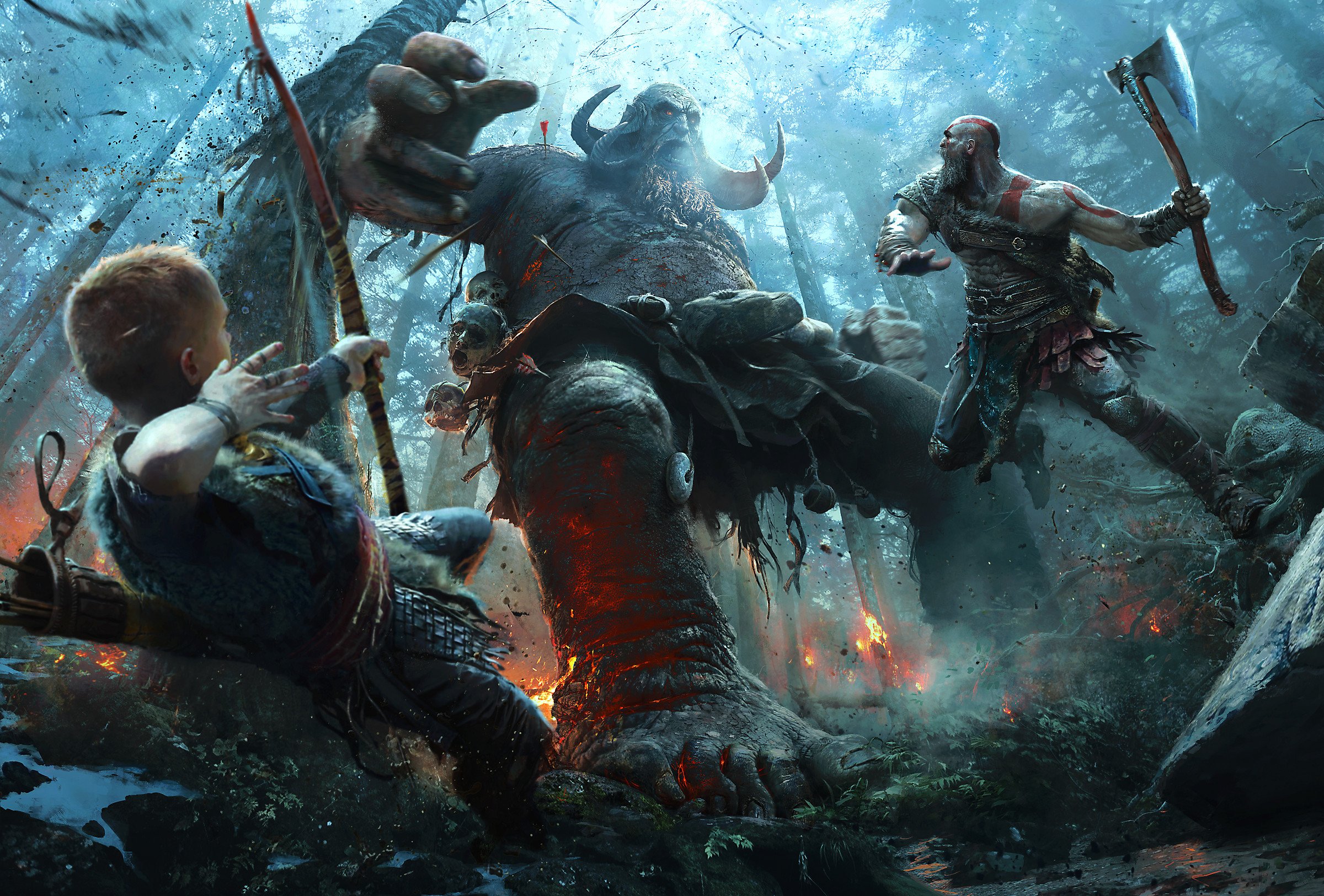 With its muted intro of…gathering wood, it’s immediately clear that God of War is moving in a new direction. The pacing, score, and the voicework are a hat tip at the level of effort that Santa Monica put into this labor of love, and can only be described as meticulous. Before you chop your first undead grunt in half, the table is set for a personal journey intertwined with an epic quest. Yes, you actually get both.

I’ve jokingly referred to the project as “Dad of War” since it was revealed, but that light ribbing slowly became more of a term of endearment as I wrapped myself around the narrative. Kratos and his son Atreus have a tumultuous relationship at the start, and although you can guess where that setup is going, the way it gets there is organic. Having played every game in the series it’s a little tough for me to truly reconcile Kratos’ new turn from “murderous genocidal asshole” to “stern father,” but some of that history is addressed, and it’s strongly hinted that the rest will make its way into the fold eventually. I’m still wrestling with it.

Atreus worms his way into combat and the game’s puzzles, mostly propelled by a square button prompt that initiates actions and commands him to fire arrows at enemies. I’ll be the first to admit that I was wary of the whole familial angle, but Atreus, at his worst at the absolute start of the tale, is merely a smartass. Very quickly he starts to come into his own in a way that doesn’t feel forced, and roughly five hours in he’s a badass in training that starts actively participating in combat with the player. Far too often works in any form of media can screw up the kid angle — but a kid that can summon spirit wolves, talk smack on Kratos, and choke out Norse zombies sure beats the hell out of most video game companions.

What starts off as a semi-grounded affair (minus some quick bouts with the undead, a few trolls, and a God) soon gets otherworldly. If the narrative isn’t moving along there’s a subtle level of worldbuilding going on, frequently spouted in sections I call “story time,” when the player is rowing down a stream or walking toward a key destination. The heavy-hitting moments (including one “oh hell yea” scene) are few and far between which is a good thing, as the pacing is even-keeled. Without giving you any details, suffice to say this is not a self-contained story.

Progression isn’t chapter-based as the discovery of new areas is seamlessly linked. For the critical path you’re moving from setpiece to setpiece, some of which are labyrinthine caves or quasi-large open zones, and then eventually you trigger a cutscene (which are nicely done with the in-game engine) or leap down from a ledge of no return. But after that individual bit is done, you’re free to come back and explore again, uncovering new secrets, sometimes with items you’ve picked up later in the story. There’s a legitimate endgame here after the credits roll, involving multiple optional areas, challenges, and bosses (the campaign took me roughly 20 hours to best, and I wrapped up every major quest minus a few collectibles in around 35).

Shortly into the fray you’ll get a fast-travel item that works at specific doorways. It’s a great compromise because while there is some light bloat (the map constantly reminds you of missed riches and collectibles), it never reaches gargantuan radio tower levels. I’ll refrain from making direct comparisons, but with a bevy of shortcuts there’s a clear amount of From Software influence afoot.

Okay but enough about how much God of War strays from the path of the original. Can you still rip apart wolf jaws and juggle fools with combos? Sure! At the start you’ll be kitted out with Kratos’ Leviathan Axe, which can be recalled after thrown and used in basic light/heavy attacks. Eventually you’ll unlock two magic slots, which are basically old combo abilities now tied to a cooldown — and you’ll earn new skills and light combos through experience points.

Early on, the limited amount of moves at your disposal aren’t as flashy as you’d expect. Calling back your axe is very cool at first and even offers an additional layer of strategy (it’s incorporated into many puzzles), but it does get old. It would have been a lot more effective of a gimmick if you could recall it while running/jumping and so on to encourage more locomotion; as it stands you have to wait until a late upgrade to recall it quickly, and even then it’s in a limited fashion. In case you’re wondering QTEs are mostly out, with the exception of the occasional circle button mashing during key moments. 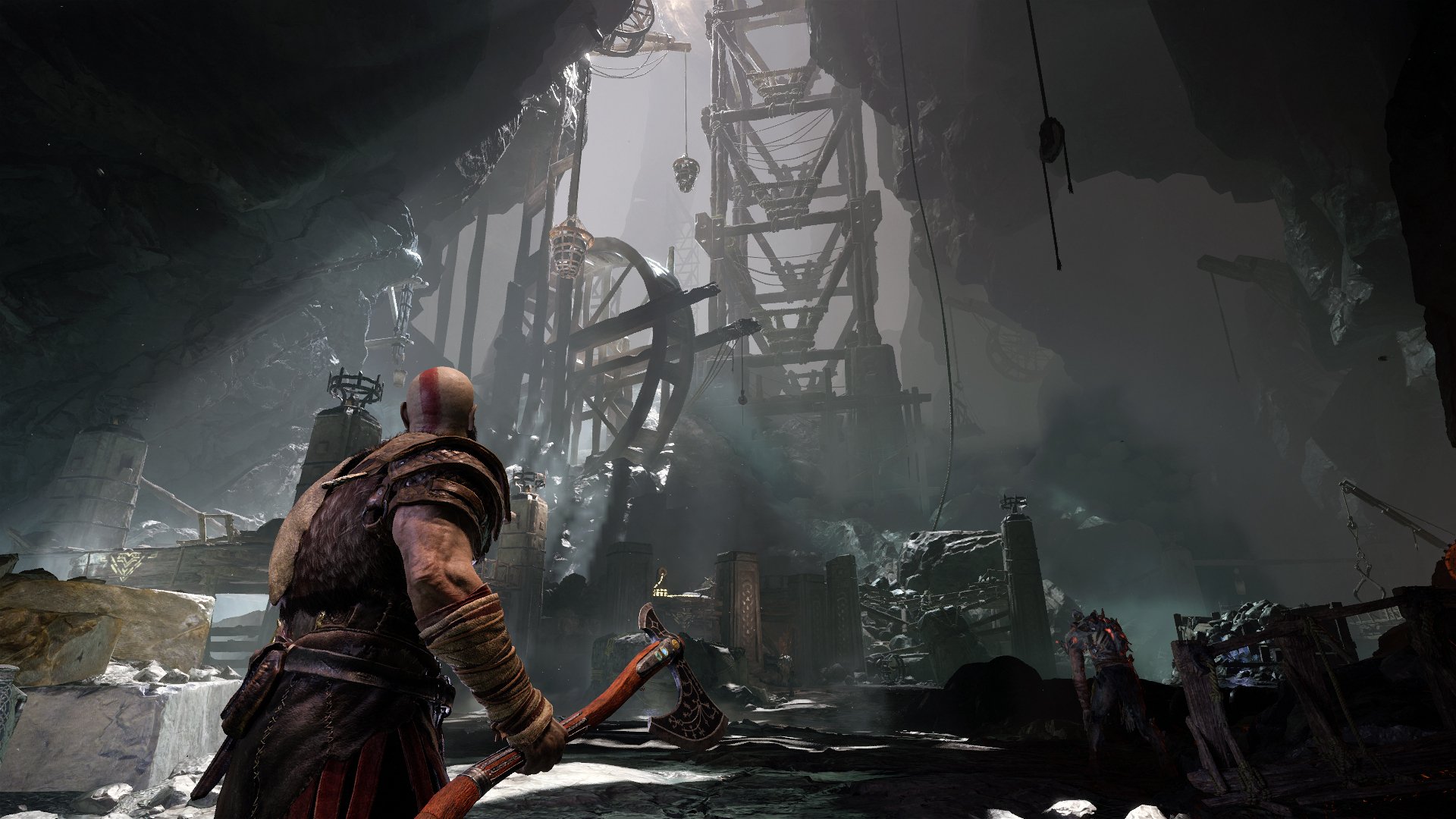 Your bread and butter is using a heavy attack as a launcher then juggling with light blows, and peppering in arrows from Atreus. A quick tap for a smooth dodge and a double-tap for rolling is a nice touch, and my favorite aspect of combat is micro-managing Atreus while Kratos is animation locked. You can also manipulate your abilities in several cool ways, like linking them to a talisman that resets their cooldowns to create new builds. Despite these nuances, at first, I was worried. Initially, combat is clunkier than you’re used to in a refined God of War. That’s because the original trilogy contains some of the finest action mechanics of the past few decades, and it doesn’t mean that the new PS4 iteration is by any means sub-par.

It’s a minor annoyance that you acclimate to after the first incredible boss fight, and more and more as you start to weave in Atreus and your god powers (Rage of the Gods is back), take in the scenery, acquire at least one new weapon, and deal with the runic and progression systems. Oh, God of War has more RPG elements now. Gear can be crafted or purchased after acquiring the appropriate materials, and it has a World of Warcraft rarity level of green, blue, purple, and gold.

Kratos can level-up by equipping better gear, and has a full statline that can be min-maxed or evenly spread. It completely depends on what you want your playstyle to be and the kinds of gems you socket. Some of this begets grinding, especially later in the game as you’re scrounging for upgrades, but it’s by no means required to see the end of the tale. As always, swift dodging and a penchant for iFrame (invincibility) windows will get you past all of the game’s challenges.

Don’t think that Santa Monica put all of their effort into dialogue and drama, as God of War maintains the same bonkers-level boss fights and setpieces, all of which are presented in the stunning in-game engine that features a hell of a draw distance. Environmental destruction helps give fights scale, and the new engine is constantly trying to push the envelope. I was hanging on by a thread in what feels like nearly every battle, which speaks to the balance team’s talent on a technical level too. 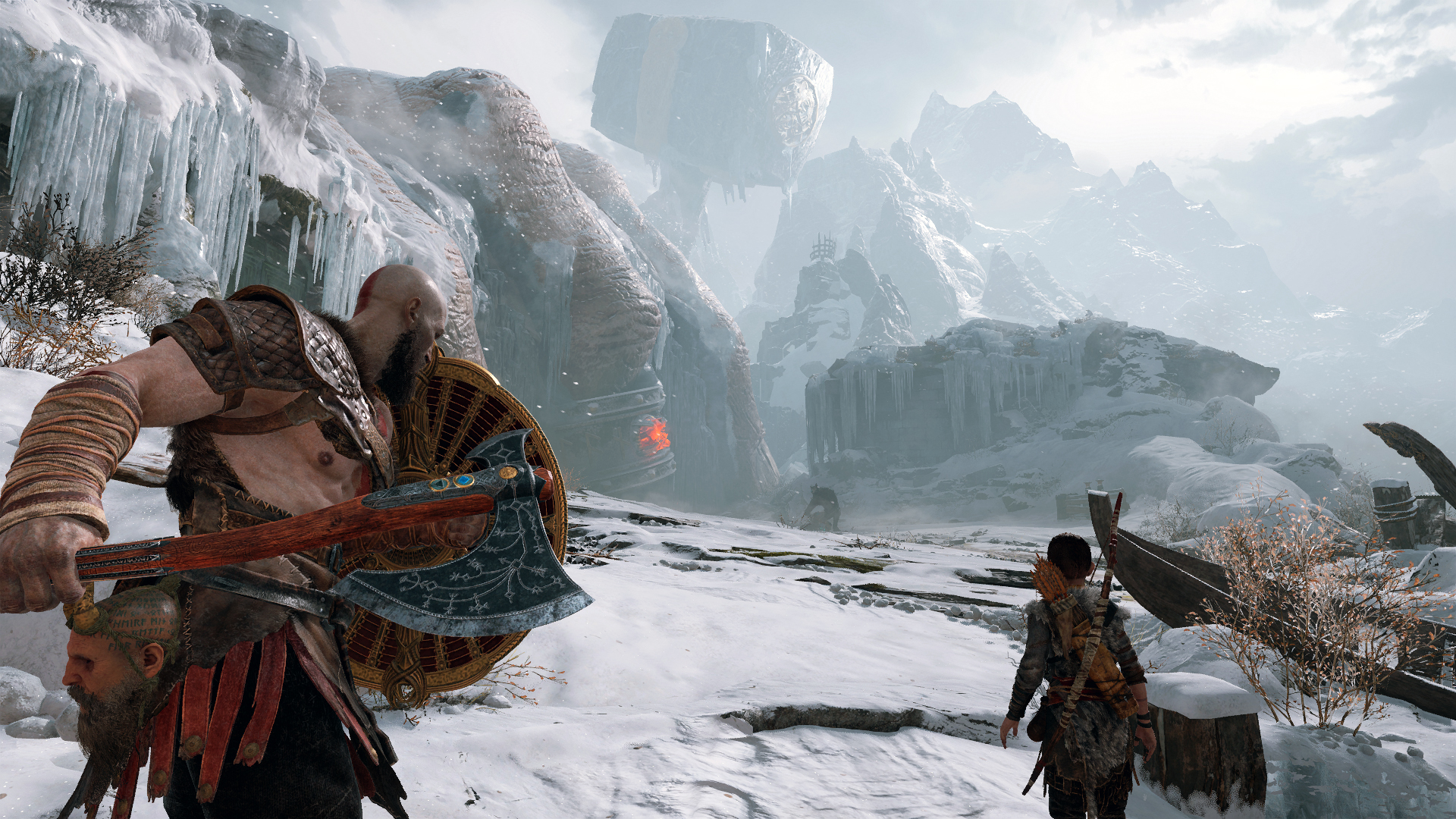 A bit of housekeeping, as I know there’s a lot of purists out there: the medium difficulty setting feels pretty on-point, and there’s a hard and very hard setting to mess around with from the start. You can also swap to easy, medium, or hard whenever you want (very hard is a take-it-or-leave-it kind of thing that locks you from changing it).

God of War is a different game for a new era of the medium. While I’m a sucker for more frantic arcadey action there are plenty of studios left carrying on that legacy. Unless something catastrophic happens to Sony Santa Monica, there’s more story to tell, and I hope the exact same team is able to tell it.