Kratos has successfully killed the God of War, Ares. He has challenged Zeus, the King of the Gods, and lived. What’s next? Well, take down all of Olympus, of course. In the latest and final installment of the God of War trilogy, that’s exactly what Kratos intends to do.

Fans of the series expect great things, since the previous installments of the franchise held up as some of the best gaming experiences of all time. The God of War III team could have simply slapped a new coat of paint on the existing formula, dreamed up some big boss battles, and called it a day. We would have been happy; that’s what we were expecting.

But the final result is something more than fancy new HD clothing. Instead, it’s a game that redefines scale in action games, one of the few titles that truly hammers home the meaning of “last-gen.” God of War III is like nothing you’ve ever seen or experienced in gaming. The end has begun, and you are not ready.

It’s easy to throw around words like “epic” when it comes to this generation’s videogames. Given the level of visual fidelity we’ve come to expect with the current consoles’ hardware, developers are always pushing the next big thing, with larger environments and breathtaking, Hollywood-style presentation. So the word “epic” may not hold the weight I would like it to in the instance of God of War III.

This is particularly true considering it stands on the backs of giants — the God of War titles that preceded this PlayStation 3 sequel provided thrills that changed the way we look at action gaming. With God of War III, developer Sony Santa Monica raises the bar, delivering an experience unmatched in its genre in terms of both quality and presentation. It truly redefines “epic” in shocking and unexpected ways you may not have thought were possible.

The tale told in God of War III finds Kratos — quite literally — standing on the back of a giant. Kicking off immediately where the credits rolled on God of War II, the Spartan anti-hero mounts the mighty Gaia, forming an alliance with the all-powerful Titans to storm and overtake Mount Olympus. Kratos’ goal here is vengeance, and ultimately, the death of the “King of the Gods,” Zeus.

What transpires in this opening sequence of gameplay — possibly one of the most effective, heart-stopping openings in gaming history — simply begs to be called “epic.” Here, Gaia is a traveling environment, a moving level that shifts and shakes as the Titan shimmies upwards. Around this, a battle rages on: armies of undead soldiers attack you, and in the distance other Titans battle against the relentless minions of Zeus. Gaia, attacked by a Leviathan — a huge water beast, made up of crab and horse parts — flails in pain as you help her fight off the beast. 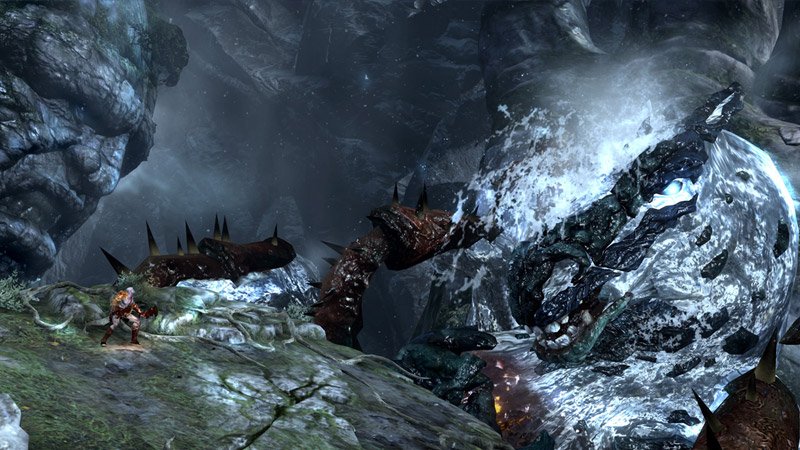 You may be familiar with this battle, as I’ve written about it in great detail before; Chad Concelmo later gushed over an extended playthrough. But it bears repeating, if only because this opening sequence is simply a taste of what God of War III has to offer. The title matches and in some cases (almost inexplicably so) tops of what is thrown at you in the incredible opening minutes.

In fact, from start to finish, the game never really lets up. It’s full of more “holy crap” and “seriously, did that just happen?” moments than any game in recent memory, pushing the boundaries of both violence (yes, Kratos is at his most brutal here) and presentation. Never before has it been so obvious just why the God of War developers assume control over its camera — they know what you need to see for the most impact, and how you need to see it; and in this instance, they are almost never wrong.

Heaping praise on how God of War looks almost seems pointless; you can see for yourself that the power of PS3 hardware is getting put to good use here. Whether you’re up close to the action and can see Kratos scowling as he battles a minotaur (its tongue wagging around as you drive your blade deep into its neck), or you’re watching him scale the environment in a wide shot of the action, God of War III never fails to impress. The game’s beautifully fitting art design truly comes to life like never before, with impressive lighting and shadows, and masterful use of intentional soft focus on both the background and foreground. The line between pre-rendered cut-scenes and in-game action is seamless; a slight pause is the only true indication that there’s any switch from real-time action to pre-rendered video. In many instances, the in-game presentation — especially during some of the game’s fantastic (and ridiculously savage) “interactive cut-scenes” — looks even more impressive. 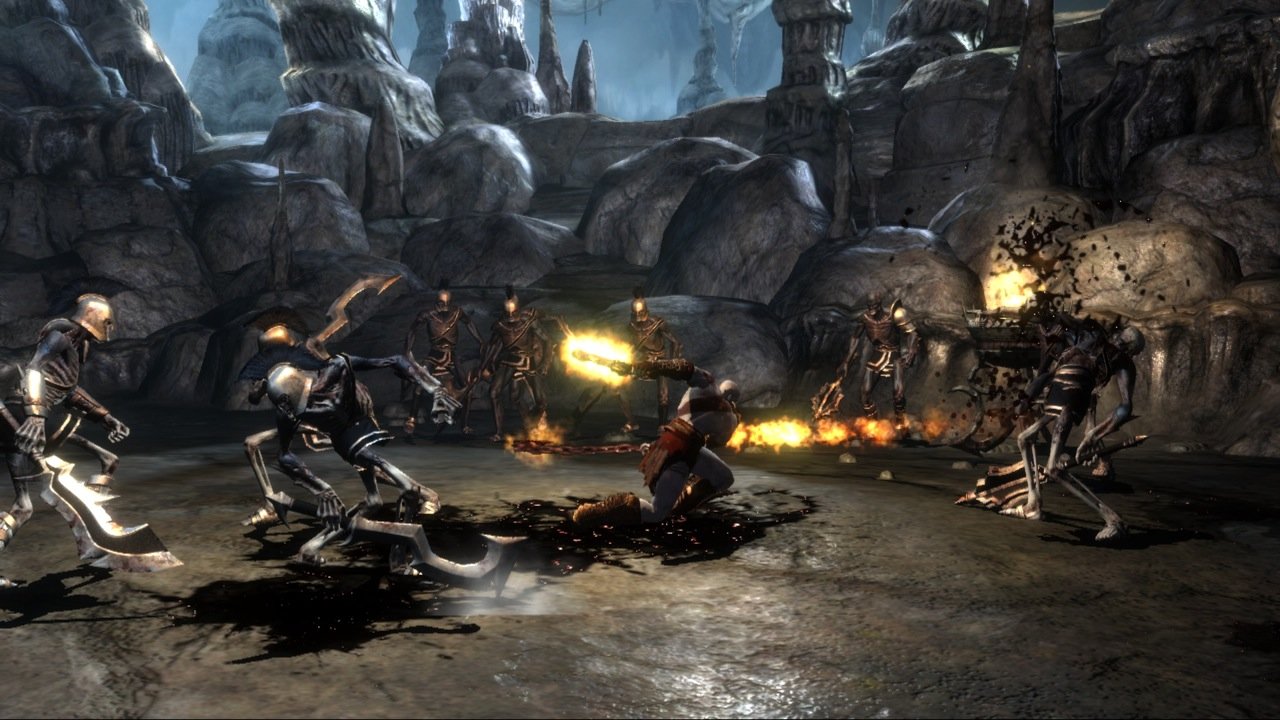 Underneath the shiny new exterior of God of War III lies gameplay that’s both recognizable and welcome to fans of the series. The core gameplay was never broken, and therefore doesn’t need to be fixed for the sequel, only tweaked. Kratos comes equipped with a familiar move set, and I was immediately at home behind the sticks, pulling off familiar combos and easily discovering new ones. The game does introduce a number of welcome additions, including the combat grapple, which allows you to grab and engage enemies with your chains, either pulling them towards you or (in the case of larger enemies) reeling yourself in.

Kratos will also acquire a number of new weapons during this final stretch of his journey, including soul-stealing chains from Hades and the boxing-glove-like Cestus from the mighty Hercules. Weapons can be changed manually using the D-pad, or cycled through on the fly by pressing L1 and X. While the latter is a bit awkward at first, with some practice I found that switching between weapons during battle was simple, and useful when I wanted to vary combat styles. Combos are mapped similarly across all weapons, so there’s never a need to really learn a new set of button presses for each, which (fortunately) keeps things from getting overly complicated.

Each weapon also has its pros and cons, the Cestus being slower but more powerful than the standard “Blades of Exile,” or the “Blades of Hades” allowing for a faster and wider evade than others. While all of the weapons feel good, only one, the Cestus (which must be used to break the Onyx shields of enemies) seemed required for combat. Still, it was nice to have a broad range of weapons at your disposal, and it’s likely you’ll find yourself switching up because you can; and, quite simply, because it’s a lot of fun. 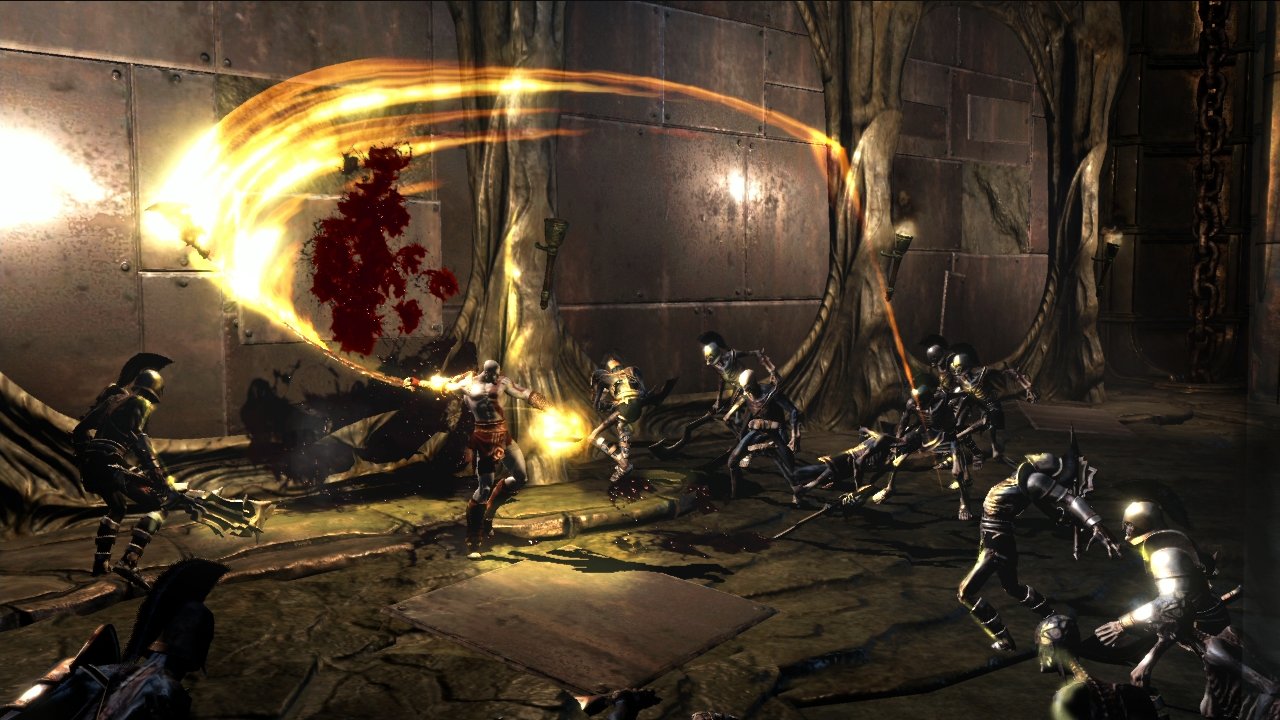 You’ll also receive a number of secondary items in the game, each of which can be used for both combat and, in some instances, general navigation. Giving away too much information about these items would betray part of the game’s storyline (however obvious it may seem), but it should be said that none of them feel like one-off gimmicks. They’re all useful in battle as well as in the game’s minor puzzles, which, while present in the game, never really get in the way of the game’s focus — visceral, heart-pounding action.

As the final chapter in the God of War trilogy, the story in God of War III is wrapped up nicely, introducing and answering new questions as well as tying up many loose ends. The game’s climax itself isn’t entirely surprising, but fitting, and presented in a gripping and moving way that jibes with Kratos’ character.

On the normal difficulty setting, I was able to complete the game in roughly ten hours. While that’s average for a game in this particular genre, it may seem a bit on the short side for some. Fortunately, the ten hours of gameplay are so packed with action and awe-inspiring moments that not a minute feels wasted. In fact, going back and playing some of the game’s key moments for a second or third time yielded the same feelings of exhilaration as if I were experiencing it for the very first time.

There are reasons to continue playing after you’ve completed the game’s story, too, including equipping special items found in your first playthrough, and the “Challenges of Olympus.” These challenges are particularly ball-breaking, keeping in line with the previous challenges found in the series, and deserve a bonus “thumbs up” for making a bizarre and random reference to the 1992 animated comedy Bebe’s Kids. (Wait… what?) 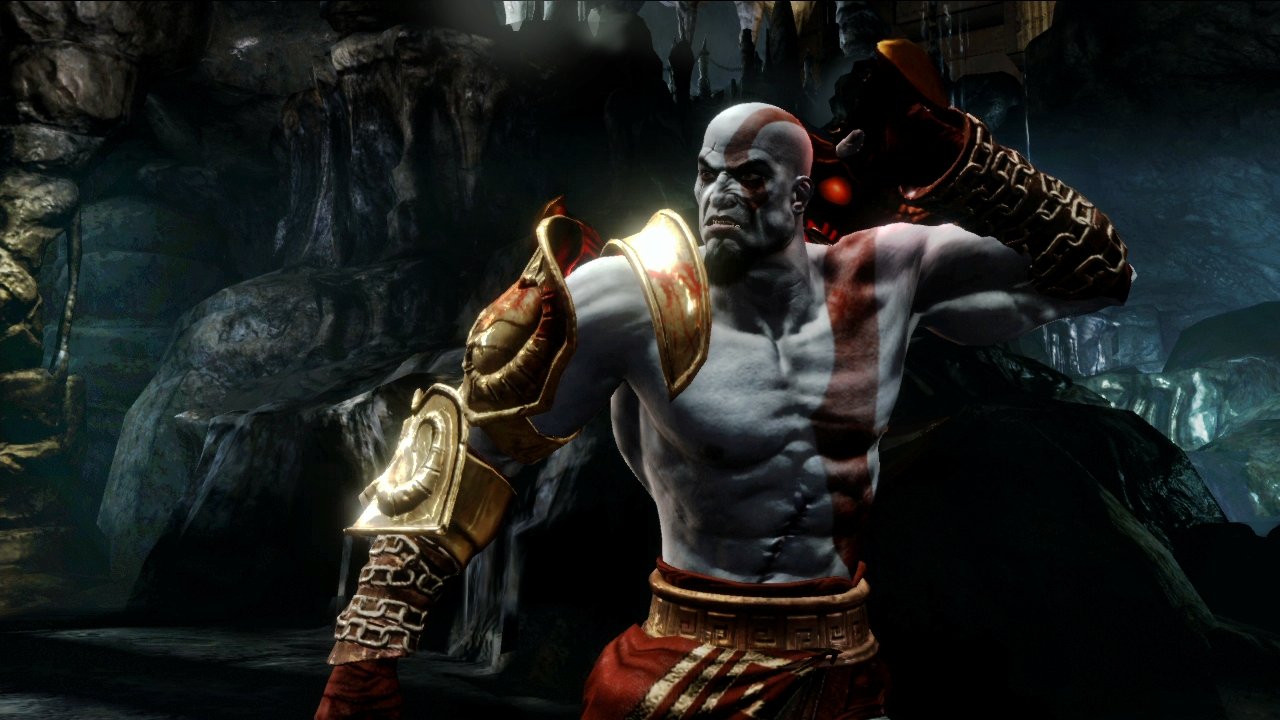 Without question, God of War III sets the new gold standard for action games, clearing and then raising the near-impossible bar that was set by its previous installments. For many years to come, this will be the game by which all others in the genre are compared, and I suspect we won’t see anything like it for quite some time. If God of War III was the reason you bought a PS3, your purchase has been justified and then some. If you’re looking to show off the power of your console, this is your new showcase — it’s an experience that simply can’t be missed.