As I sat down to begin playing Ghostrunner for review, I started explaining the basics of the game to my significant other. When I got to the point about it featuring a one-hit kill mechanic, I was questioned why I would play a game that has such a potential to frustrate me. I didn’t have a good answer other than the fact that when you win, the good feelings wash away all the anger and there’s something cathartic in that.

Ghostunner absolutely put me through my strides and tested the limits of my willpower, but the joy of victory was worth it all in the end in this high-paced sci-fi ninja romp. 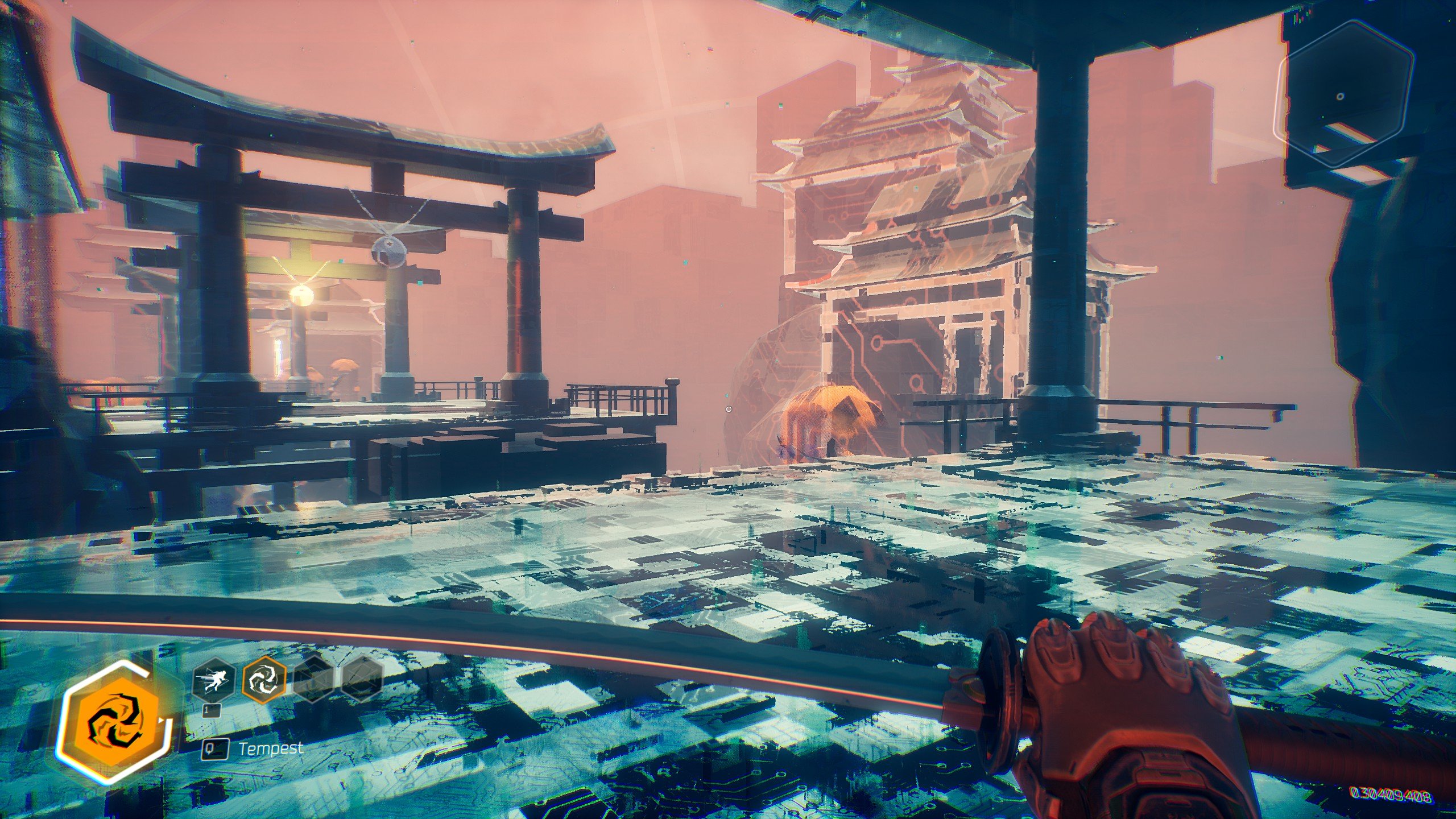 Ghostunner is a first-person action-platformer set in a Cyberpunk future. You play as a Ghostrunner who is awoken by The Architect, a prisoner, who in a last bid attempt to save himself calls upon you. After you free The Architect, you are made to ascend the tower where the last known humans live following an apocalyptic disaster on the surface to kill the despotic ruler, Mara. Along the way, you’ll also “meet” Zoe, a member of the resistance group against Mara.

The story of Ghostrunner is nothing overly unique so you’re not gonna find a reinvented wheel here. A despotic ruler must be overthrown for the good of humanity, but of course, all is not as it seems. If you’ve played or read anything cyberpunk before nothing here will surprise you. The story is all told through voice-overs in your head so it’s not overly intrusive which is nice if you’re not overly interested in the story.

What initially drew me toward Ghostrunner was the gameplay and that is where the game absolutely shines. As a Ghostrunner, you have the ability to run on walls, dash through the air, and carve enemies up using your katana. The basic gameplay cycle is arena-based combat interspersed between wall-running and platform-based puzzles.

The combat is kinetic and well designed as each arena gives you all the tools you will need to defeat your enemies, but also gives you enough freedom to go about your plan how you see fit. It’s easy to get locked into a single solution but Ghostrunner rewards exploration and using all of your available powers with hidden paths and better angles with which to attack your opponents advantageously. It’s a nice opportunity to have after the tenth time you died in a row trying the same thing each time.

Which leads me to the difficulty, Ghostrunner isn’t a walk in the park, it isn’t even a wall-run in the park. There’s one difficulty and if you don’t like to be challenged then you might want to look elsewhere. While every enemy you face can be felled in one strike, so too can you. You are a glass cannon and that makes every move you make matter so much more. Thankfully though even though you are expected to die a bit, you get thrown right back into the fray with a simple tap of the R button.

Ghostrunner employs a masterfully balanced difficulty curve by slowly introducing you to new enemies and making sure you get some time to learn how to defeat them one on one. Then once you’ve all the experience you need, the enemies are thrown in with others you’ve already met and thrown into a fully explorable arena. It makes sure that the game never feels unfair, but that doesn’t mean it’s easy.

The boss battles are also fine-tuned to challenge your knowledge of not only your abilities but the use of your environment. In recent years, I’ve been growing rather tired of boss battles because outside of the Soulsborne series, none of them seem inspired to me anymore. Defying my old jaded mind, Ghostrunner makes sure to only put forth a boss battle when they know it will be impactful and a fitting coda in an arc of the game.

You’re also given special abilities that have limited uses in two forms. One is in-world power-ups that are mainly placed from a level design perspective, and other more permanent abilities that you can use only sporadically. The number of times you can use these powers is based on how fast you can fill your power gauge. The gauge refills with each enemy you kill and can be augmented to raise based on other feats of skill in the game. The abilities aren’t required for any battle, but it is a nice fall back should you find yourself struggling with a particular battle. 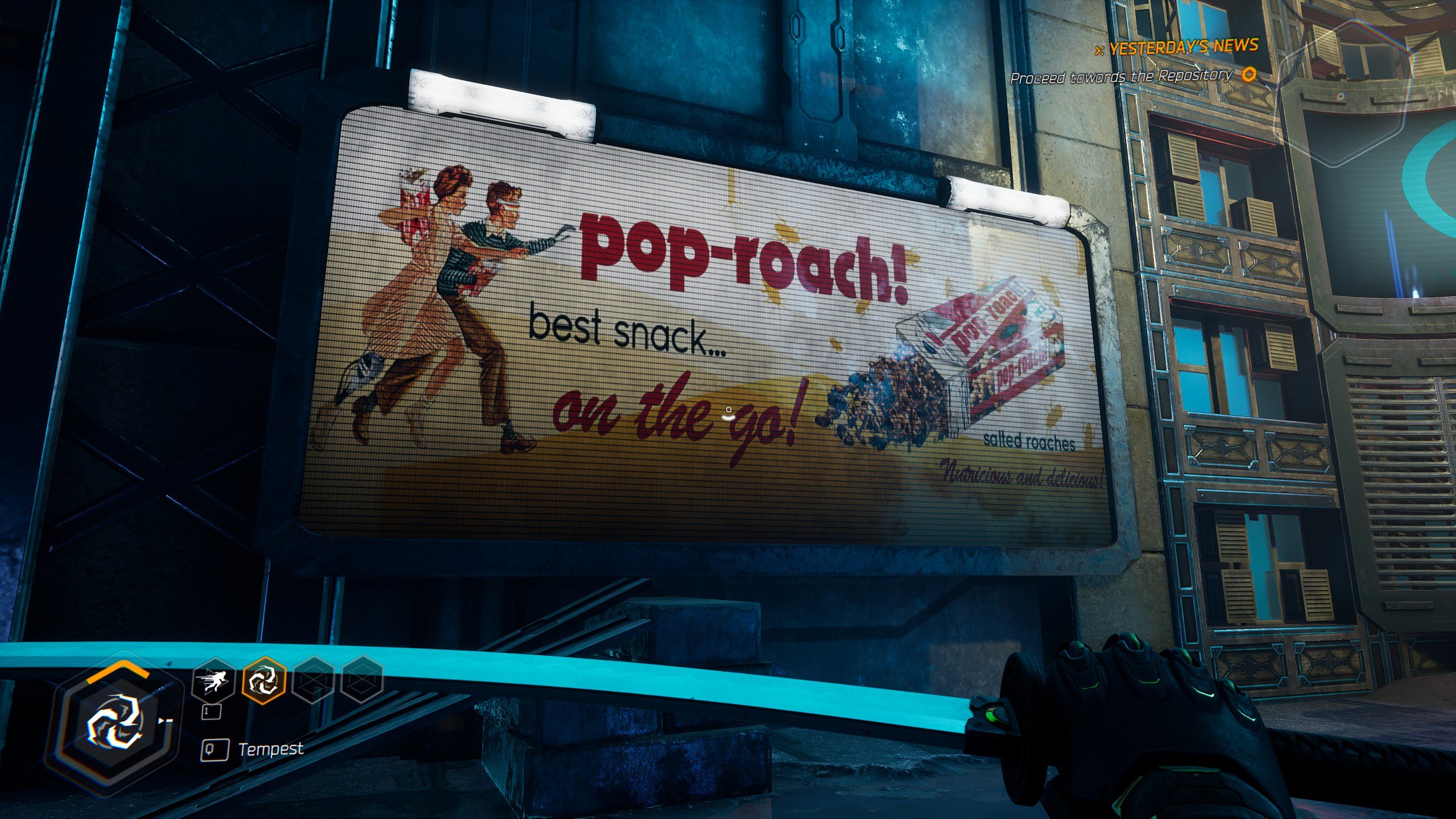 It’s not just the combat that is hard either, the environment traversal segments are also challenging in their own way, not just to your skill but also to your ability to think outside the box. There are a few instances where a path looks like the right way to go but it’s designed to be impossible and you are forced to think of a new way through. It makes the wall-running and character movement into something more than just a gimmick and fleshes it out into a fully utilized game feature.

There is one detriment to the difficulty that needs to be addressed and it’s the lack of a checkpoint save. While you are playing the game there are checkpoints throughout the individual levels like any other game that doesn’t actively despise its player base. The catch here is that if you quit the level for any reason, you will lose your checkpoint progress and have to restart the level. I was playing with a pre-retail copy so it remains to be seen if something is going to be added at the last minute. I have reached out to the development team on the matter but in an era where time is precious; it feels unnecessarily harsh to withhold what is now an industry-standard feature.

One of my main concerns going into the game was how a game that relied so much on speed and momentum was going to fair in the performance category. I can say that while there are some issues in the game in the later levels when the environments are a bit more open, the game runs nearly flawlessly. I was able to easily get 120 frames per second in 1440p on my rig in all other areas. Granted I’m a little over-powered for this but I was also pushing the game beyond the normal limits, so to see it running as well as it did even at that resolution was a welcome sight.

As I played through the roughly eight-hour campaign this week I couldn’t shake the feeling that I was playing the unholy union of Hotline Miami and Mirror’s Edge that I didn’t know I was missing in my life. Through all of the frustration and cursing at myself for screwing up something that I knew I should have gotten right, I was still having a blast and loving every minute of the game. Though the story is complete for me, I’ll most assuredly be returning to this to see how well I can hone my cyberpunk ninja skills.