Geometry Wars games have always been, in a sense, one-dimensional. They present the player with the seemingly simple task of “shoot everything in sight,” and that’s the sole objective apart from staying alive. The onslaught of flying colors and booming music molds the experience, but the core remains uncomplicated. For many, that’s enough to be held in the highest regard when discussing twin-stick shooters.

In 2008, the heralded Geometry Wars: Retro Evolved 2 vastly and competently iterated upon its predecessor. It added a handful of new modes, each one legitimately fun and addictive in its own right. But more importantly, it fueled sincere and passionate competition across online leaderboards — a social dynamic that few games since have been able to recapture. In many ways, it was the perfect game.

All hyperbole aside, Geometry Wars 3: Dimensions makes Retro Evolved 2‘s efforts look puny by comparison. It adds depth in so many more ways than just literally, but never strays from the formula that makes Geometry Wars incredibly lovable. It’s certainly the most ambitious and fully realized title in the series to date, and it’s difficult to imagine a different take that would improve it. In many ways, it is the perfect game. 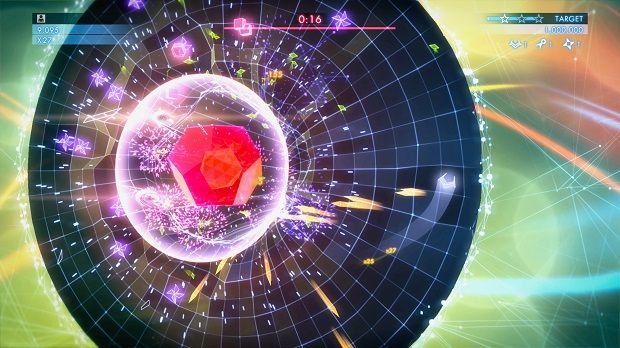 For the uninitiated, Geometry Wars 3: Dimensions (and the entire series) is a twin-stick shooter that’s just as much about surviving as it is about scoring. Each attempt culminates in an overwhelming number of enemies on-screen, as color explodes in every direction. The brilliance behind the game design lies within the fact that every destroyed enemy leaves behind a few floating green Geoms that increase the score multiplier. It’s always a treat to watch scores skyrocket toward the end of any given run, as the effort to earn an extra few million is trivial compared to what it took to net a few thousand only a minute earlier.

The core of Dimensions‘s systems are largely unchanged. The movement and shooting is still incredibly responsive and precise. For moments of emergency, bombs are still available to clear the entire screen. Yes, Dimensions is undoubtedly built upon the framework of previous Geometry Wars games, but it also innovates in ways that are very much welcomed.

Geometry Wars 3: Dimensions’ biggest catch (and as the namesake alludes to) is that it ditches the rectangular two-dimensional playing surfaces in favor of fully-traversable geometric shapes such as spheres and prisms. The departure isn’t as jarring as it may initially seem, as it doesn’t take long to get into the groove of knowing exactly how the camera’s going to swing. After that adjustment’s made, these grids feel like the playground that Geometry Wars should have been played on all along.

Perhaps not as monumental as the 3D maps, the new Adventure campaign may be the most necessary and effective inclusion toward reviving Geometry Wars‘ approach. Made up of a set of 50 challenges, this mode is the meat of Dimensions. Each level has a three-star ranking system which makes it incredibly replayable. Anyone who isn’t in search of leaderboard conquest will still strive for high scores, as these offer a fine sense of fulfillment.

What makes Adventure truly special is the sheer number of tricks it has up its sleeve. Across the 50 levels, there’s rarely a case of two challenges ever feeling the same. There are plenty of examples of playing tried-and-true modes like Pacifism or King in Adventure, but there’s always something that makes it different for each challenge — whether it’s the shape of the grid, moving walls, or just the slightest style twist.

While all the old favorites are back, new modes are also peppered in. For example, Claustrophobia has the player scoring as many points as possible until the walls narrow so far that it’s impossible to not get squished into an enemy. The best one is possibly Sniper, which marvelously subverts the design of Geometry Wars by simply limiting the ammunition available. Instead of spraying in any direction at all times from afar, it puts an extreme emphasis on accuracy and close proximity to danger. 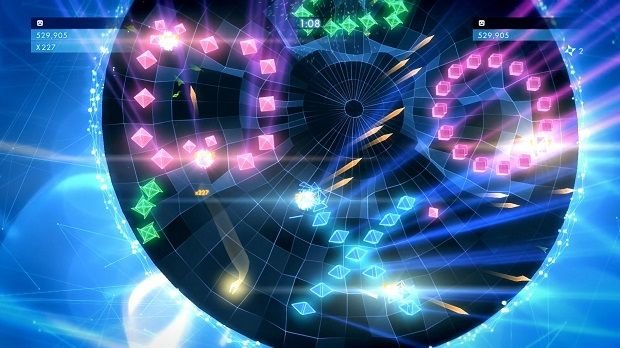 However, danger is slightly more manageable this time around, as Dimensions offers a handful of helpers to deal with imminent threat. Unlocked through progression are a series of drones that always follow and “supers” that are limited in use. Some of their functions are sniping random enemies, automatically collecting Geoms, and creating a black hole to suck in everything that’s nearby. There are five of both drones and supers, and each one can be upgraded to increase its usefulness. Supers can be almost as handy as bombs, making them invaluable. Drones are tough to notice in the chaotic fray of Dimensions, but they’re undoubtedly helpful.

Although the bulk of the battles focus on scoring as much as possible until death or time runs out, a few stick out as wildly different. Dimensions introduces boss battles — six of them across Adventure — that require depleting a large enemy’s health after his shield has been dropped. Each one takes a new approach, but all of them are similar in the sense that survival is paramount.

For a game that’s all about iteration, it’s somewhat surprising that Dimensions includes a throw-back to its roots. Under a heading called “Classic Mode,” the majority of Retro Evolved 2 is present in the format that fans will recognize it in. No 3D grids, no supers or drones — just the gameplay from 2008 that was so popular. There are also local cooperative and online competitive multiplayer modes to round out all that Adventure has to offer.

Classic Mode’s inclusion might just be a nod to the mindset of Lucid Games when developing Geometry Wars 3: Dimensions — improve as much as possible while still staying true to the core of the franchise. That old game is still there, it’s just unspeakably better now. It may have been past installments in the series that were billed as evolution, but Dimensions is where Geometry Wars truly evolved.