Space seems like an unfriendly place. Beyond the regular hazards such as the lack of oxygen, lots of floating junk, and apocalypse-causing chunks of rock and ice, there’s also all the people fighting. Killing people in space, particularly with ships, appears to be rather popular. Though not popular enough so that we are drowning in games on the subject. Killing things on alien worlds? Sure. Killing people in the future? Plenty of that. But not much space warfare.

Gemini Wars is all about that very subject, however. Big ships, captained by angry people, blowing up the ships of other angry people and aliens. That was more than enough for it to capture my interest, initially. After 16 missions of strategic conflict and the eradication of my enemies, I’m ready to leave space behind and take a well-deserved break on our lovely little planet. 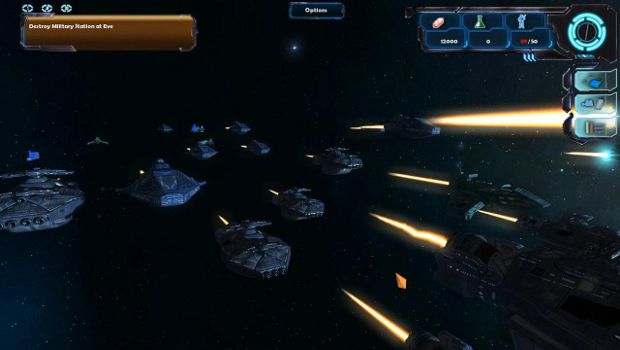 Gemini Wars follows the exploits of Captain Cole, a boring, hideously deformed fellow who has returned to duty after being exiled for a few years. Now, I should point out that almost everyone in Gemini Wars looks awful, so Cole could very well be the most handsome man in the galaxy for all I know. Cole works for the USF, who are humans, and they are at war with the Alliance, who are also humans. And now you know their defining characteristics.

Beyond the aesthetic differences in ship designs and bases, there doesn’t appear to be much between them. Well, other than the fact that a man offers you feedback on a USF ship and woman for the Alliance ones. It’s the same two voices for every ship and they talk a lot. Mainly about enemies being destroyed. There is no option to rip out their throats, so muting the game became something of a must early on. The obnoxious sound effects, inconsistent volume, and generally poor quality audio were not missed.

Missions take place in a variety of solar systems, some taking up multiple systems in fact. Scattered around these systems are asteroids for crystal mining, planetary bodies, and hazards such as dangerous gas clouds. Cole’s fleet can construct military bases, mining stations, colonies, and other facilities to augment his forces. If you’re the “paranoid general” type, you might like to surround your bases with plenty of turrets. A wall of them can fend of a surprisingly powerful force, at least for long enough so that you can reinforce the position or mount a counterattack. 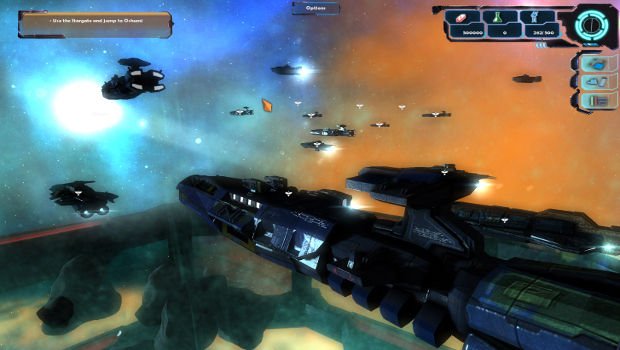 Ships move at a painfully slow pace, but can make hyperspace jumps to close areas. Eventually Cole can order the construction of platforms that allow for extra solar travel. The maps can get really big, almost imposing. They look quite arresting as well, full of color and massive worlds as they are. They are 3D but everything takes place on a 2D plane. Unit positioning is only really important in terms of range; ships just line up and fire their cannons. It makes battles feel very hands off, and despite the weapon effects and explosions, quite dull to watch.

Crystal and research points are the game’s resources. Crystal can be gained from mining and is used for everything you build. Research points are accumulated by building research stations and can be spent on technological upgrades from a simple tree. There’s very little unit customization, but lots of research and experience points gained from battle can make any vessel hardy. With there being only one resource I needed to actively seek out, I never found myself torn between building on different areas. There’s plenty of gathering, but very little management. There’s frequently abundance of crystal, so it ends up being the facilities that restrict the speed of your war machine, not the lack of resources.

While the game starts off as a war between the USF and the Alliance, it quickly becomes a desperate struggle between humans, an alien race known as the Grak, and a group of traitors. While none of the antagonists are even remotely interesting, they at least provided a bit of diversity.

When the giant fleets face each other and unleash their brightly colored lasers and projectiles, the effect is quite satisfying. However, battles often start with slowly moving into position and that can feel like an eternity. I had an Invincible comic lying on my desk which I enjoyed reading as I waited for stuff to happen. And oh how I waited. 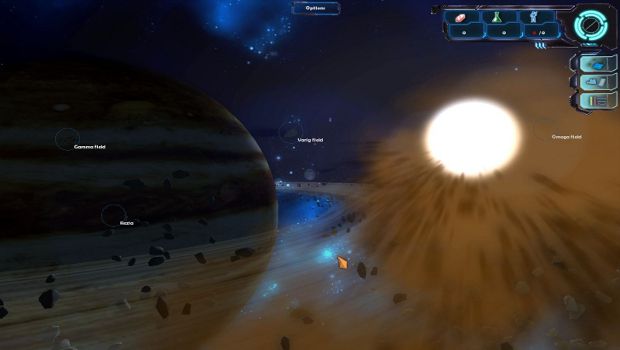 The warp mechanic is one of the few things that Gemini Wars does well. One moment it can be a convenience and relief from the slow behemoths under your command, but the next moment it could be your downfall. There’s a cool down between jumps — one that is thankfully the same for every ship — so if you jump to an area and get ambushed, you’re stuck there for a little while. Ships that lose too much of their crew or lose their engines are completely trapped, even if they aren’t on cool down. I found myself in many intense situations, where I was pathetically trying to save as many ships as possible while keeping one eye on the counter just waiting for it to hit 100.

The single-player, story-based campaign is all you get in Gemini Wars, though it’s a hefty one. Generally the AI is incredibly predictable, so it’s not something I imagine many people replaying. Multiplayer and skirmishes are being added at a later date, which should give it a bit more longevity. They will be free, to boot. The story itself is not particularly memorable, but there are enough twists and turns so that there’s motivation to continue. Motivation that, in my experience, was slowly eroded by putting up with a whole plethora of annoying bugs. 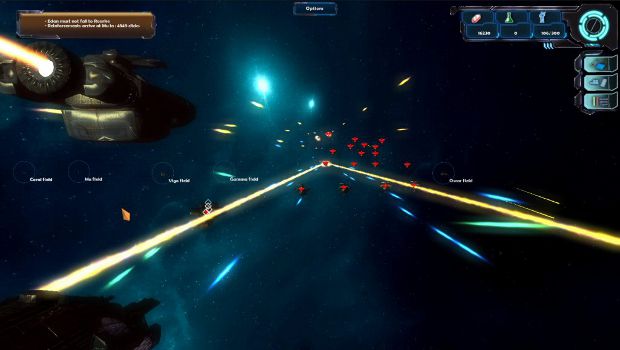 I can get bored quite easily, so I like a lot of diversity. The bugs certainly have me covered in that respect. Many of the issues I encountered occurred in saved games. I’d lose some of my research, which stopped me building more of the ships I’d already been building. I thought I was going mad, but then I saw the rest of my fleet, filled with vessels the game was telling me I couldn’t possibly build. Researching it all over again didn’t solve the issue. Replay mission.

I encountered one enemy fleet which had more than doubled in size when I reloaded. It swiftly demolished any forces I sent to engage it and there was no way for me to increase my unit cap. Replay mission.

I found myself incapable of boarding a space station, the main objective of the mission. Replay mission.

I found myself incapable of boarding a space station … oh for goodness’ sake. Skip mission.

You get the picture.

Gemini Wars has two good ideas, which is two more than a lot of games. There simply aren’t enough story-based space strategy games, and the warp mechanic was wonderfully employed, making wars across several systems exciting and risky. Unfortunately, I spent most of my experience with the title cursing in frustration at all the bugs, or wishing I was doing something — anything — other than sitting in front of my PC, watching ships move with the haste of a geriatric. With enough patches it could be a perfectly serviceable RTS, if not a particularly fun one.