Sometime in the third act of Gears Tactics, as I was studying the battlefield to find optimal points of cover to send my COGs scurrying behind, the parallels hit me like a ton of bricks: All those Gears games I had been playing since the Xbox 360 were a lot more like strategic tactics games than I had ever pieced together. It took Gears Tactics‘ fixed overhead angle to really drive the idea home. Looking down on all those chest-high walls, I realized how much of Gears is about finding prime positioning and waiting for the right moment to attack.

Gears and the tactics genre may not seem like a natural fit, but it really doesn’t take long to understand how they complement one another. Gears Tactics is a leveraging of that relationship, an effort that amplifies what each half individually brings to the table. I want to say the whole is greater than the sum of its parts but that might be overthinking it. Let’s just say everything explodes smarter. 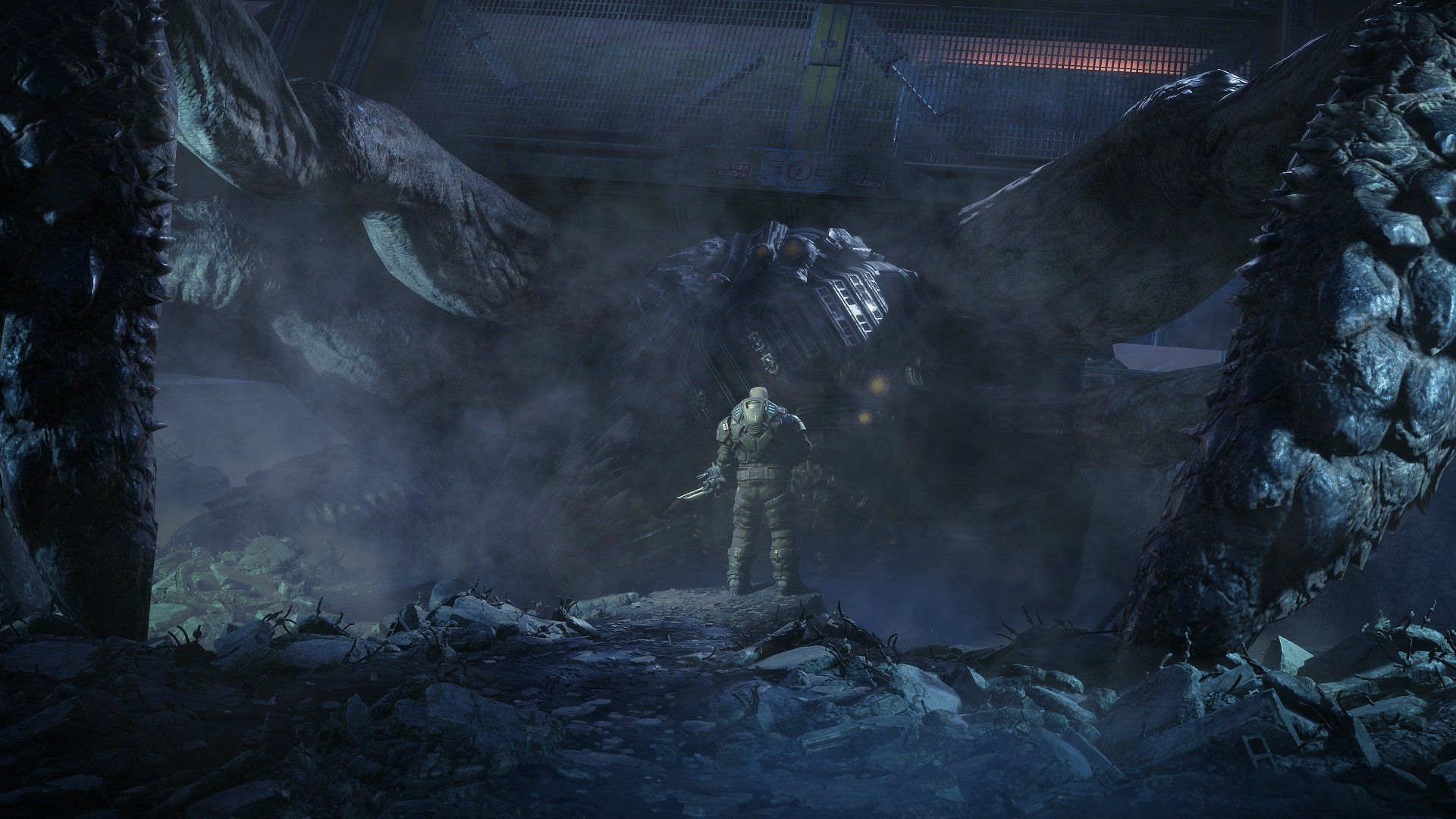 Gears Tactics‘ most impressive accomplishment is that it’s a fine starting place for Gears fans who have no familiarity with turn-based strategy games, and it’s a fantastic introduction to Gears for tactics aficionados. This is a fast-paced take on tactics, one that usually favors pushing forward and thinning out the enemy’s numbers before they even get a chance to fire. Hunkering down in defensive positioning is practically an invitation to get flanked from all sides.

The key contributor to making Gears Tactics feel particularly action-oriented is that each squad member is allotted three moves per turn instead of the XCOM-like standard of two actions. It’s a simple tweak to the formula that goes a long way toward achieving the super soldier power fantasy. Even if they’re used just to slide a good way across the terrain before getting a single shot off, getting three actions makes it feel as though something significant happens every turn. (It’s less cute when the enemy gets three actions too, moving further than you thought possible for a shotgun blast point-blank into your COG.)

There’s a fine line to encouraging an aggressive style in a strategy game, and Gears Tactics balances on that tightrope gracefully. It’ll mercilessly punish careless and reckless abandon, sending Locusts to pin down and trap any squadmates who get a little too far ahead of the team. A brilliant heat check system is that Tickers — an explosive enemy type that detonate when in blast range of your soldiers — will move forward whenever a shot misses them. That 30 percent accuracy chance doesn’t seem like such a worthwhile gamble if it essentially means a grenade is gonna go off at your feet.

The Gears-iness of it all bleeds through in a lot of ways, but none as significant and powerful as with executions. Rushing to execute a downed enemy grants everyone else on your team an extra action. It’s the perfect example of how adapting Gears to tactics can elevate both. Sometimes, this additional move is enough to finish off the remaining threat. Other times, everyone needs a reload, no one is in a good position to get a decent shot off, and getting the execution did nothing but pull that one member into a more dangerous spot. Even when the advantage seems obvious, it’s important to weigh the pros and cons of each decision.

However, executions are also the most immediate way of gaining momentum, and Gears Tactics is certainly a game of keeping your turns rolling. Finding synergies between class types, triggering buffs and abilities with kills, switching between characters in the most efficient manner — these are all extremely satisfying but hard-to-master techniques that will have you steamrolling through the Locusts. Hell, sometimes the momentum-keeping move is to throw everyone in a defensive stance on overwatch, letting the enemies run right into your line of fire. Gears Tactics‘ approach to overwatch is to draw a visible cone outward toward the opposition — the wider the cone, the less accurate the shots; it’s an effective way to always know whether you’re pinned down by an enemy.

Aside from Horde modes in newer games, Gears dives into defined classes for the first time. It’s an expectation of the tactics genre. There are five class types, each with their own restricted primary weapon: Support (Lancer), Sniper (Longshot), Vanguard (Retro Lancer), Scout (Gnasher), and Heavy (Mulcher). It’s enough variation to accomplish most anything. 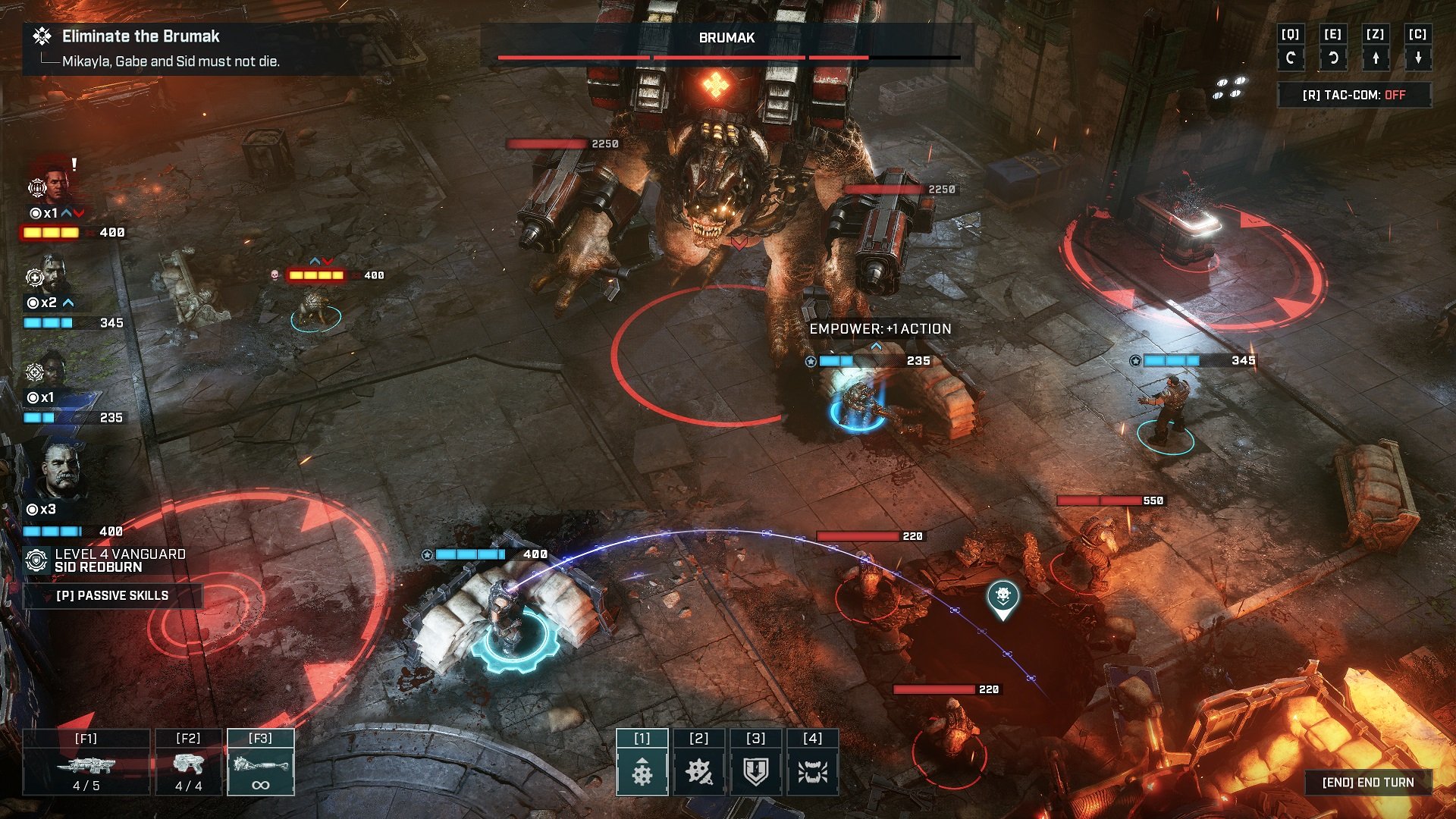 There’s an added role-playing aspect in that each class has a unique skill tree that branches into four distinct proficiencies. Choices will have to be made, but Gears Tactics is fairly liberal about empowering you. A fully-leveled character will have enough points to spec toward two of the four areas. Figuring out how all these skills synergize with the other classes’ skills is the deepest understanding of Gears Tactics, and the key to being an efficient player.

This is where Gears Tactics runs into something of a roadblock. A major component of tactics games is to recruit new troops, hoping you don’t end up too attached to them lest they die. That’s here, but Gears Tactics also tells a set story that has primary characters. The main protagonist is Gabe Diaz, who will eventually be the father of Gears 5‘s star Kait Diaz. There are a handful of major characters, and you’ll naturally find yourself sending them on all the missions rather than some random inconsequential soldiers who are also on your roster. It strips the allure of playing with different class builds, as most people will gravitate toward sending out the squad that shows up in cutscenes. 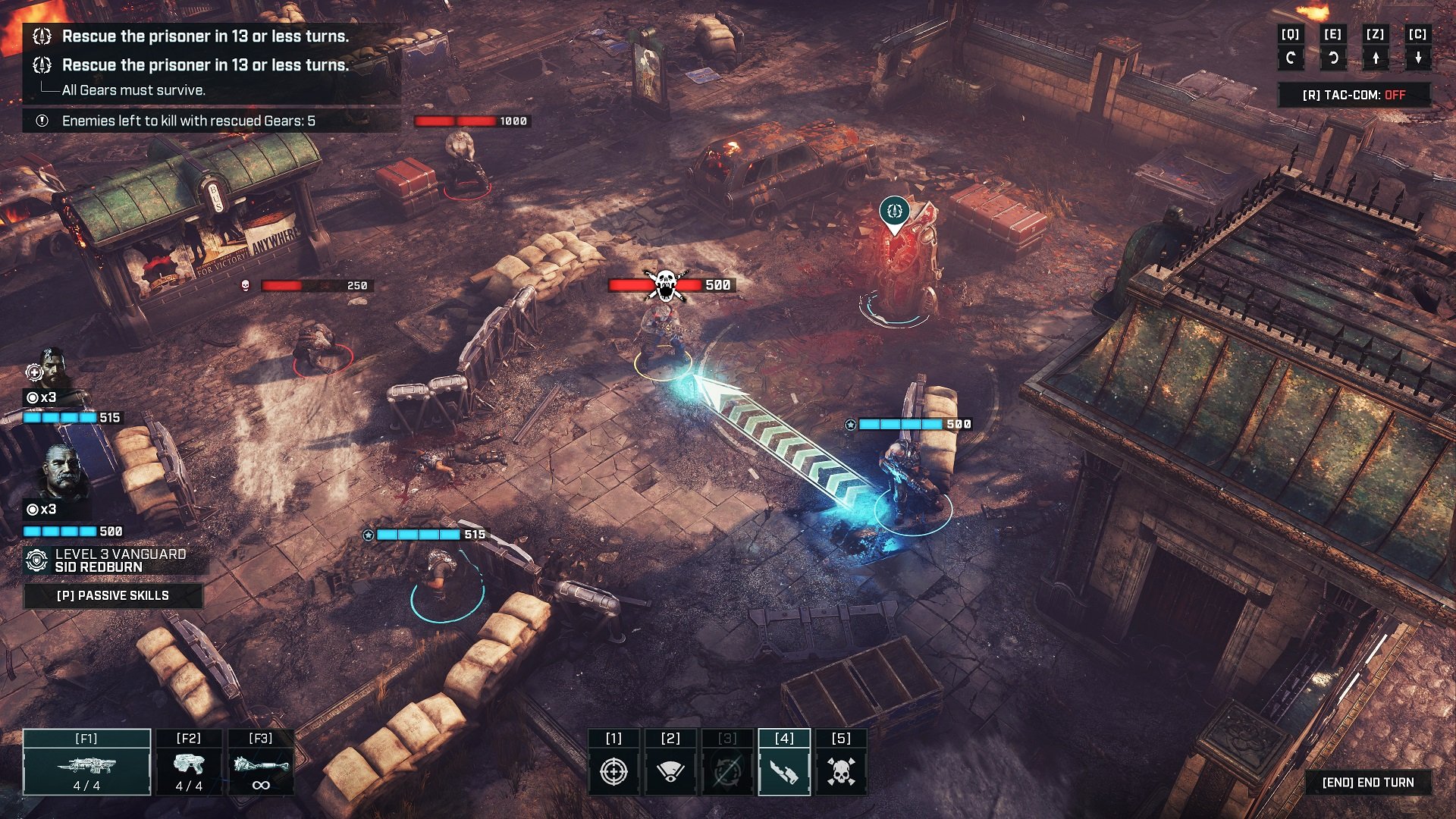 Even though it’s those same four familiar faces (five, if you grab Cole by way of playing during the first week), they do more to carry your battles than to carry the story. Gears Tactics tells a narrative that comes off as mostly trivial, a side-tale that fills in the lore for Gears geeks. There’s a major revelation or two, but it’s evident that experimenting with a new genre isn’t where Gears stewards The Coalition felt comfortable assigning plot beats that would alter the future of the franchise. You can’t really blame them.

It’s not until the endgame when Gears Tactics will force all those other troops on you. After the credits roll, there’s a new system called Vanguard missions. It’s essentially a never-ending stream of random missions, three side missions and one main mission required to go up a single Vanguard level. The prize is more gear to outfit your Gears with, as you’re really just hoping new Legendary weapon parts pop up that you don’t yet have. However, there’s a steady rotation of soldiers needed as each can only partake in one side mission, meaning you need a crew of 12 to fill out the roster. By then, you’re long past the point of caring about them. 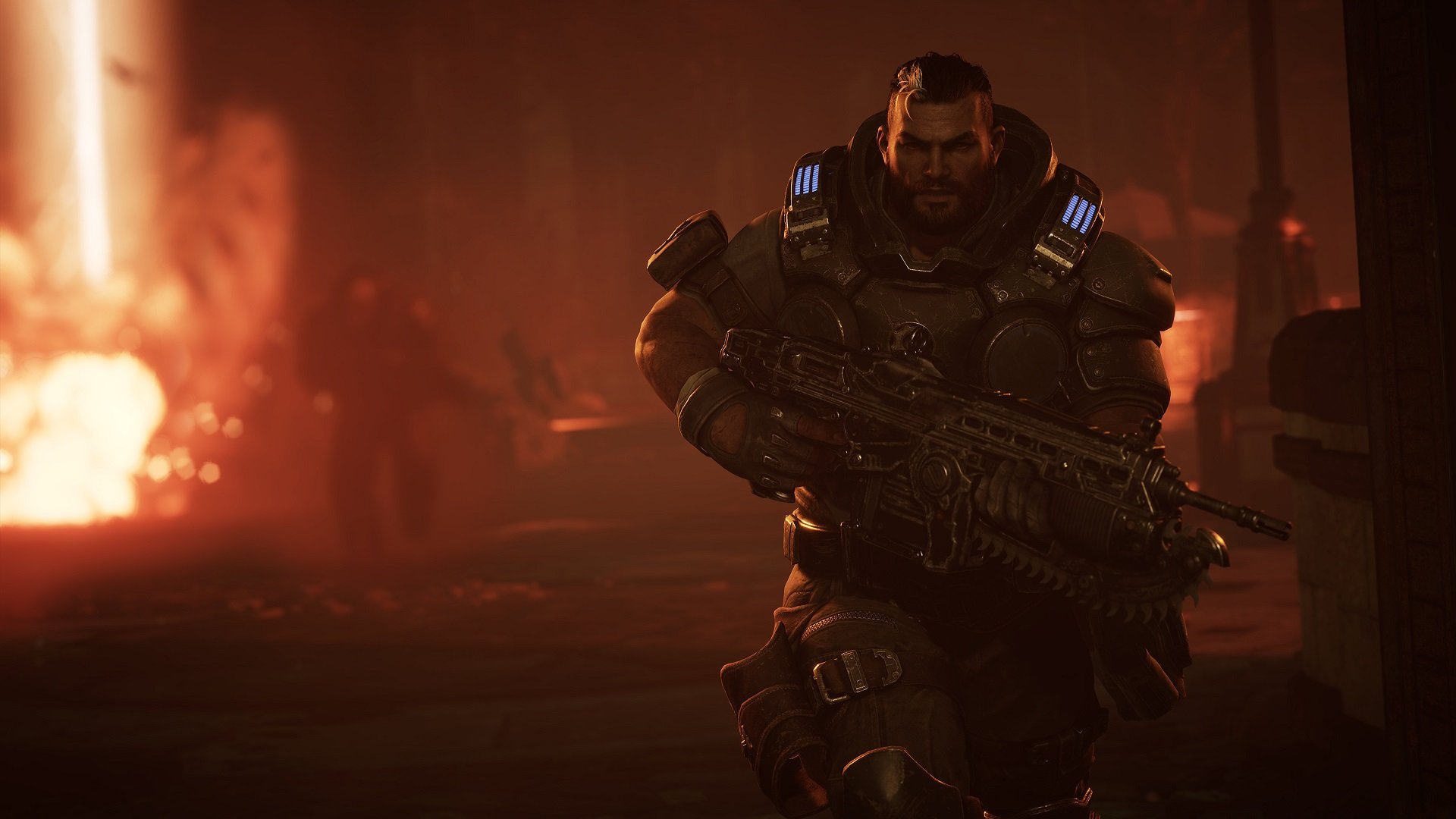 Likewise, the gear system runs dry before the campaign is over. Each COG has four mods for their weapon and three pieces of armor. Aside from Legendary drops, there isn’t enough variation to keep this interesting. At some point, it’s just a bunch of duplicates clogging the inventory screen, leaving little reason to check on all the new equipment. Also, it seems like there was a missed opportunity to lean further into Gears and introduce incendiary, shock, and smoke grenades. (As is, there are only frag and healing grenades.) Making all of those class-specific could have a big impact on the flow of combat.

All my quibbles are on the periphery of Gears Tactics, though. The core — getting onto the battlefield and agonizing over every move — is excellent. There’s a smart experience here, one that feels both authentically Gears and tactics. That’s the best possible outcome. Gears Tactics is a great Gears game and a great tactics game. This 90% doesn’t miss.