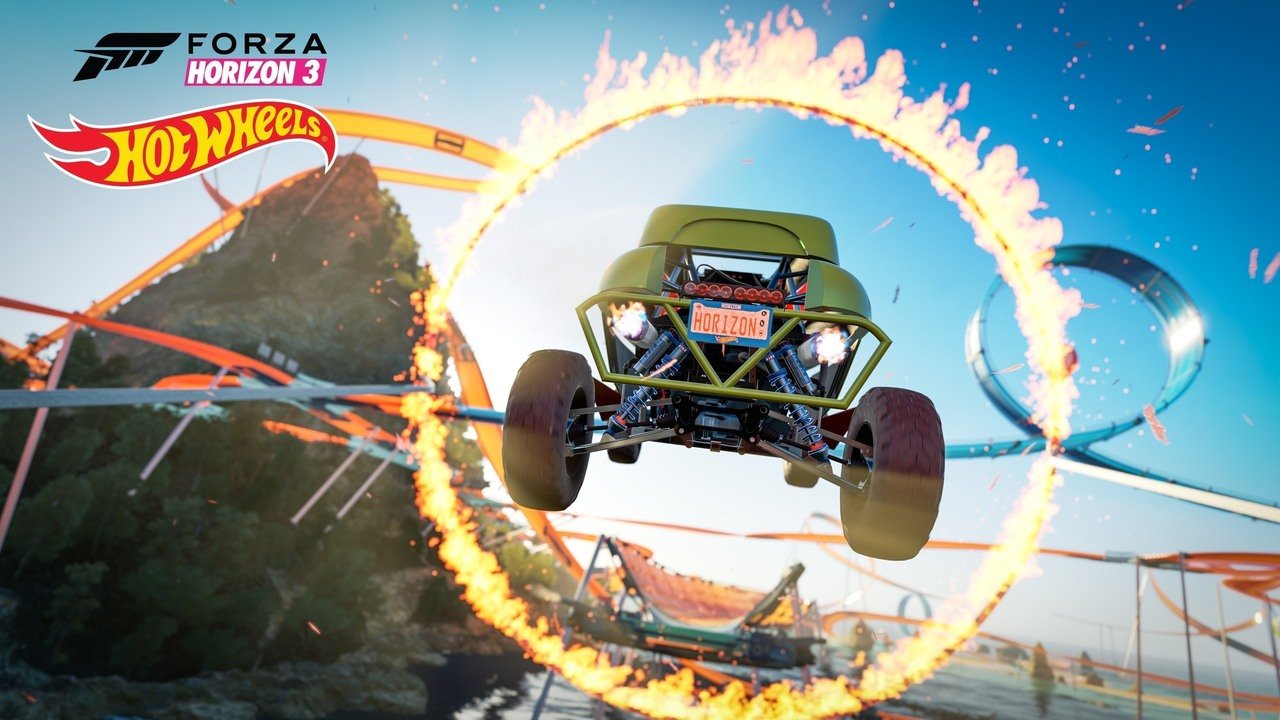 On paper, Hot Wheels is a dream mashup for Forza Horizon. This is a series that has always reveled in the ridiculous, putting as much emphasis on stuff like stunt jumps as it does on technical racing. A Hot Wheels partnership seems like an evolution of that formula as it leans into the imaginative in a way that only a post-release add-on can. 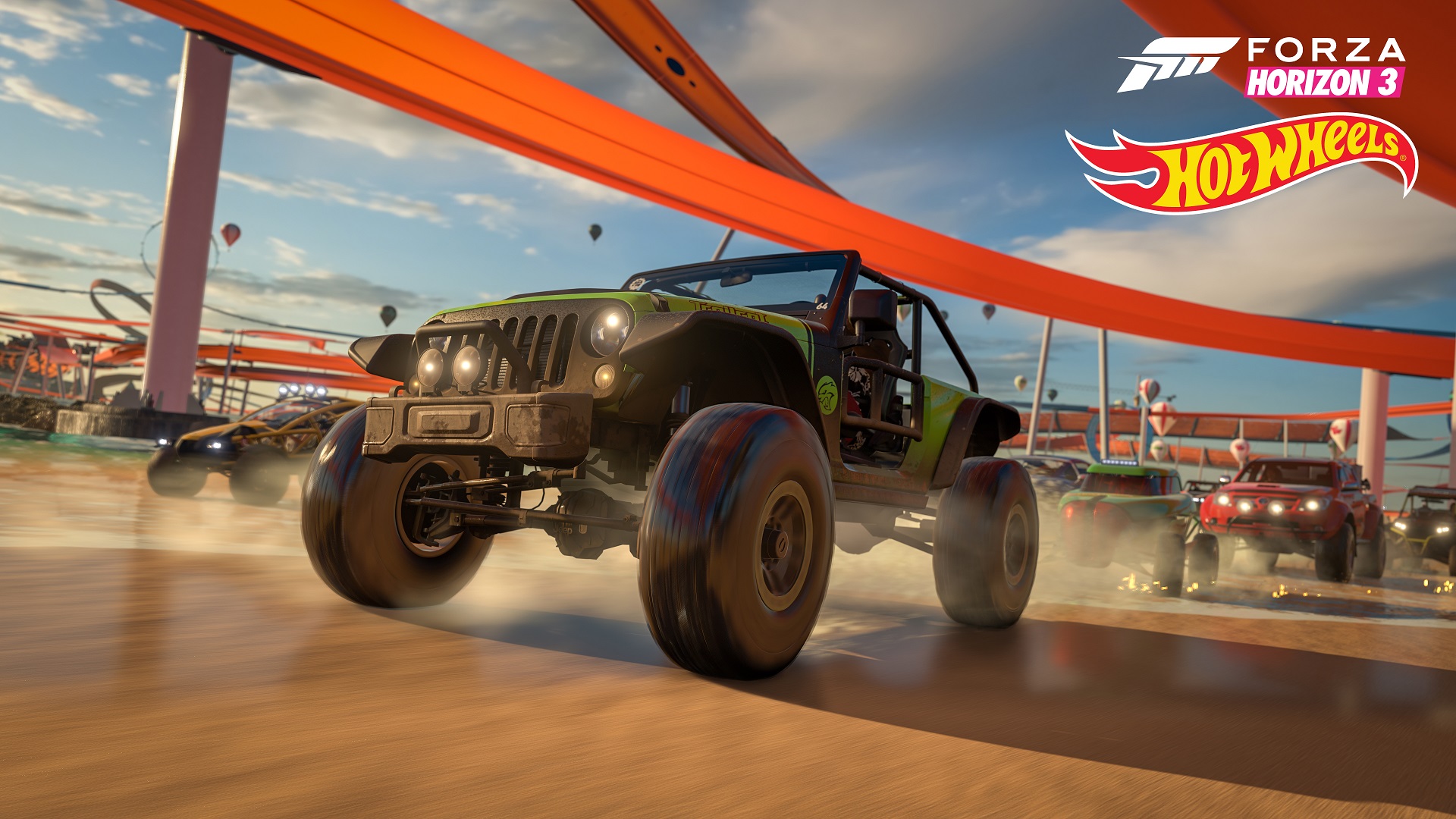 Deconstructing Forza Horizon, it’s the freedom of the open road that allows the franchise to thrive. The open-world structure lends itself to driving nearly anywhere, often enticing the player to cut through fields and forests because that seems like the fastest route. The races are similar. There are always checkpoints, but there’s room for creative maneuvering in between them.

The Hot Wheels expansion mostly strips this away. Confining Forza Horizon 3 to orange tracks that are maybe the width of two-and-a-half cars restricts the game in a way that we’re not used to. It’s suffocating. Sure, they wind and twist high above the re-purposed Australian landscape in a surreal, majestic way. At times, it seems more like an amusement park than a series of “roads.” But it’s a facade, a clever disguising of something that is diametrically opposite the principles of Forza Horizon.

But, as we noted in our Blizzard Mountain review, any Forza Horizon add-on will be good simply because the framework is so excellent. Hot Wheels manages the same fate. There are 28 races and they’re all equally exhilarating, even if the narrow tracks can cause significant congestion among all the competitors. It’s still odd to be surrounded by guard rails for 80 percent of each race, though. Supplementing things is a healthy peppering of the usual stunt activities (danger signs, drift zones, speed traps, etc.), but these are rarely challenging. It’s also worth noting that there is no showcase event in this DLC, meaning that we’re deprived of the opportunity to race against something like a fighter jet or a helicopter or that mechanical dinosaur.

Hot Wheels has a notable inclusion that bodes well for the future of the franchise. It adopts the medal system the Blizzard Mountain introduced where the player is incentivized to perform an additional task while still winning the race. Usually these speak to the arcade-like nature of the game, such as earning a certain number of skill points. However, Hot Wheels plays it safe with a lot of these goals, often just asking that you finish a lap faster than a targeted time. This is a progression system that should absolutely be implemented in the inevitable Forza Horizon 4.

A neat tweak comes in how players can customize their races. Forza Horizon 3 allows for the blueprinting of events, giving people the freedom to alter certain facets like weather conditions, laps, and time of day. Hot Wheels takes it one step further in a way that caters to our nostalgia of sitting on the living room floor. Each event has a stunt or two that can be swapped out for different ones. For instance, a wavy section of track could be turned into a boost jump. Or a spiraled climb could be made into a loop-de-loop. It’s a nice bit of cohesion considering we’re playing with Hot Wheels.

Given the theme of the add-on, surprisingly little racing will be done in actual Hot Wheels cars. The AI field is made up of real vehicles from the base game, and chances are that’s what most people will lean on too — especially those who have a garage stocked with their favorites. Nonetheless, the expansion comes with 10 new cars (one of them being a secret barn find). The other nine are: the 1969 Hot Wheels Twin Mill, the 2011 Hot Wheels Bone Shaker, the 2012 Hot Wheels Rip Rod, the 2005 Hot Wheels Ford Mustang, the 2016 Jeep Trailcat, the 2016 Zenvo ST1, the 2007 Toyota Hilux Arctic Trucks AT38, the 2010 Pagani Zonda R, and the 1972 Chrysler VH Valiant Charger R/T E49.

Forza Horizon 3 Hot Wheels works even though it occupies a weird space. It doesn’t play to Forza Horizon‘s strengths and, eventually, it doesn’t even feel much like Hot Wheels anymore. It’s claustrophobic and constricting in a way this franchise hasn’t been before. In a twist of irony, it’s the Hot Wheels aspect that prevents this expansion from ever performing anything spectacularly perilous.