It seems like many developers who grew up with a love for bright and colorful 3D platformers are doing their best to revive the buried genre in recent years. Games like A Hat and Time, Yooka Laylee and the remastered version of the Crash Bandicoot trilogy have proven there are definitely players out there craving a return to the genre.

Flynn and Freckles takes the frustrating precision platforming of games like Spyro the Dragon and combines it with the swordplay and exploration of 3D Zelda titles, rolling it all into a brightly colored world of haunted swords and pirate adventure.

Flynn & Freckles follows a young pirate by the name of Flynn on a quest to find the treasure of Captian Freckles, an old pirate who once ruled the Seven Seas with the help of his greatest treasure, the Golden Banana.

As time went on, Freckles grew a bit paranoid — as most people with power do — and locked himself away from the world on his private island. A legend suggests that upon his death, Freckles legendary sword was possessed by his spirit, granting the pirate’s power to any who would find it and free him. Who better to guide you to Freckle’s legendary treasure than the man himself?

Flynn’s adventure opens feeling very much like a Zelda game. You run around your home island finding chickens for villagers and slicing up bushes. Everything about Flynn & Freckles swordplay is lifted right out of 3D Zelda, and the pirate motif gives off a pretty big Wind Waker vibe. 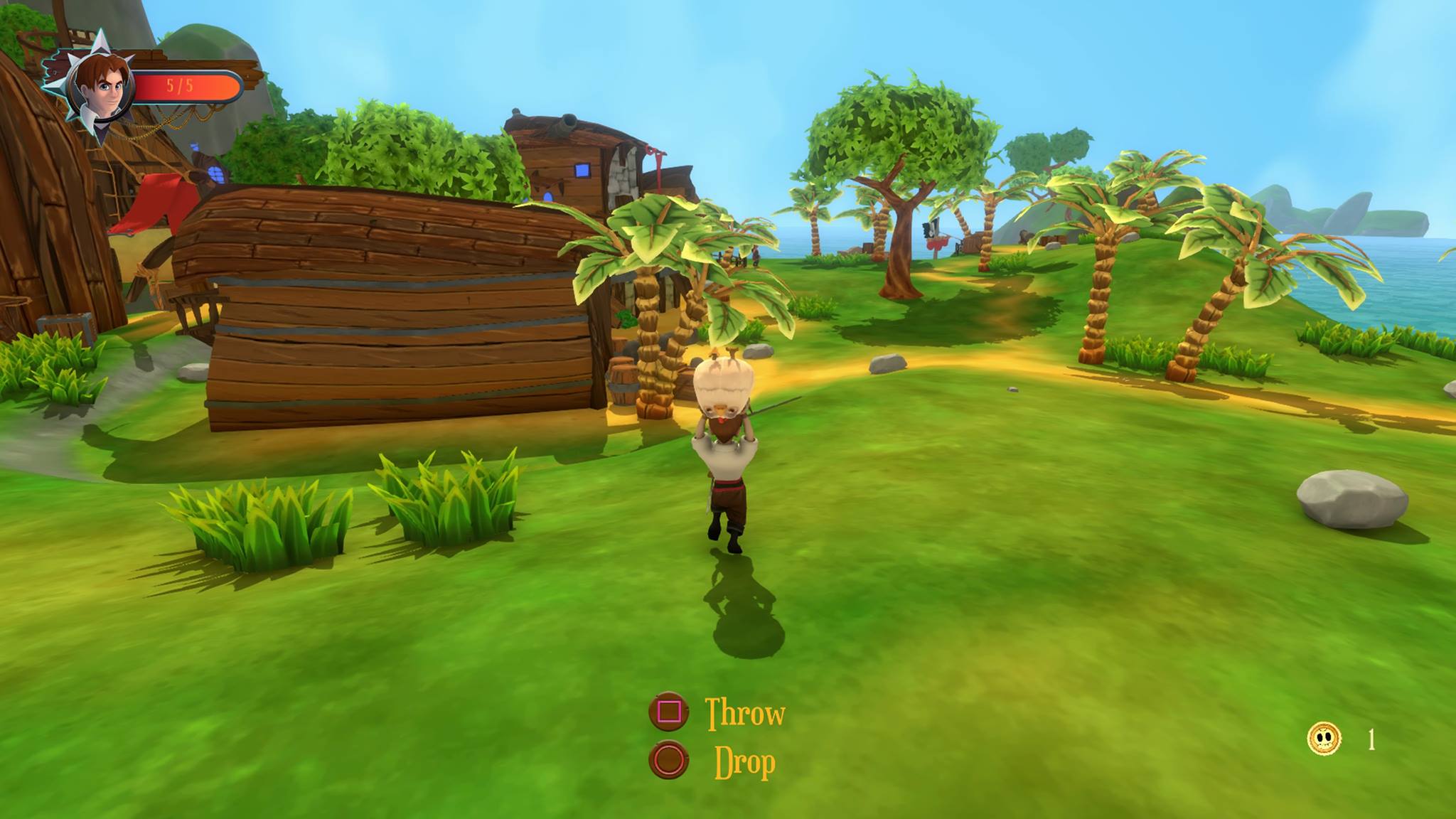 While Flynn & Freckles setup and art design are perfectly fine on the surface, its gameplay fails at almost every turn. The platforming is incredibly reliant on precision, but constant and apparent drops in framerate had me just missing the mark enough I had to get up and walk away on more than one occasion.

Early on Freckles spirit is set up to take on the role of your guide though he remains silent through most of Flynn’s adventuring. He chimes in on occasion to teach you about a new attack or deliver some story exposition, but the pirate ghost never hits Navi levels of annoying guide. While constantly being hounded by a support character can get old quick a little bit of back and forth between the two characters could have gone a long way in making this world feel a little less lonely.

You progress through Freckles’ island in a mostly linear fashion, though specific areas require backtracking that feels entirely at odds with the overall level design. Flynn eventually gets equipped with some Zelda-style gadgets like bombs that shake up puzzle design a bit, but not enough to keep things interesting all the way through.

Flynn & Freckles might have been an alright if not unremarkable platformer if it weren’t for how horribly broken it is. I fell through the geometry more times than I can count — I was keeping a tally at one point — and would randomly slide off surfaces if viewing them from certain camera angles. 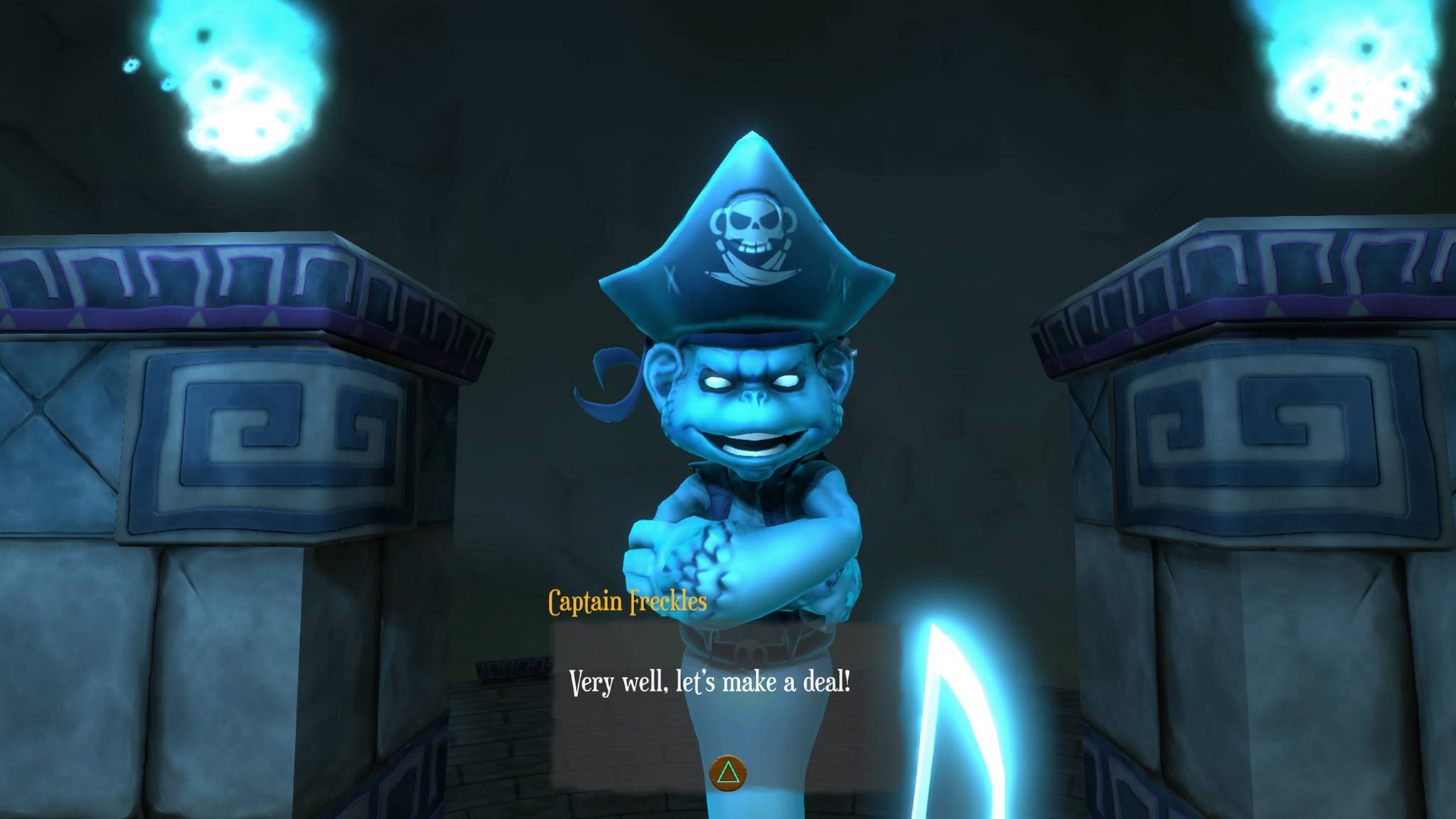 Every time I could find something to enjoy in Flynn & Freckles it would quickly be overshadowed by a frustrating platforming sequence, mundane level design, or one of the many rage-inducing bugs that would ultimately result in my death. The character design and colorful world all have promise, but it’s evident that something when wrong along the way.

As a fan of 3D platformers, I wanted to like this game. But in its current state, I find it very hard to recommend and I’m not sure performance fixes would make it all that much better.