Roguelikes suck. They don’t suck as in they are horrible to play. They suck for me because they’re so damn hard. But in this genre, that’s part of the challenge. For whatever reason, our gamer brains desire to overcome the impossible odds roguelikes provide.

Flame Over for the PlayStation Vita is no different. As challenging as Spelunky, this latest offering from Laughing Jackal will have you crying as you attempt to overcome those initial upgrade hurdles that stand in your way of perfection. 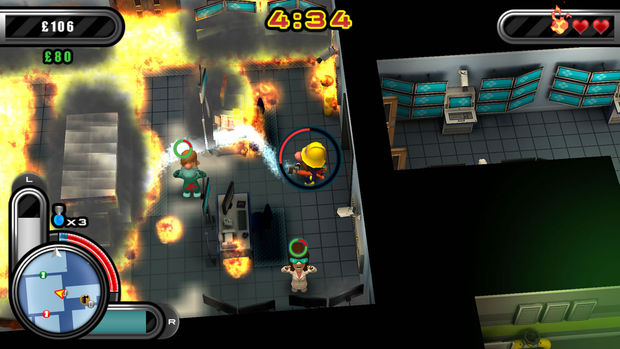 Set up as a twin-stick shooter with randomized levels and a persistent upgrade system, Flame Over doesn’t seem all that challenging. I mean, just look at it. It presents itself as a fun, lighthearted romp where you put out fires, save people and rescue cats. You know, the normal shenanigans that firefighters experience on a daily basis.

However, Flame Over quickly dispels that belief and smacks you in the face with its difficulty. Your first obstacle to overcome will be to nail the controls down. You can shoot water with the right bumper and use an extinguisher with the left. The initial difficulty comes in realizing you can use both rather interchangeably and that your movement is directly affected by their application.

There is no real tutorial, so you are pretty much left to figure it out for yourself: there are tips you can enable, but who needs those. As is pretty standard, your time within a given level is limited. It seems rather tame at first, but once you realize how long it takes to put out a fire or how much you need to refill your water or extinguisher, time suddenly seems to slip away fairly quickly.

You can add to your running clock by rescuing random people scattered about, but their availability and willingness to follow you can vary — for instance, they would stop following me if I ran too far ahead and there was an object between us. Similar to Spelunky’s ghost, when you run out of time, the figure of death will appear. He’ll chase you down (albeit pretty slowly), but if you touch him, game over. While he does move at a casual pace, it gets harder and harder to dodge him because of the walls of flames and tight spaces you can find yourself squeezed into.

Of course, in most roguelikes, game over is a way of life. This is how you learn. So just like other titles, you accept it and move on. This is an area I would have liked to see be handled a little better. Roguelikes really work when you can restart your game fairly quickly — as in, I push X and I restart right away. While it’s not a slow process in Flame Over, it’s not as fast as some other roguelikes you may be used to. This can add to a bit of frustration already built up from your previous failure of a run.

It’s not a big deal, but something that should be refined for a game like this to really shine. 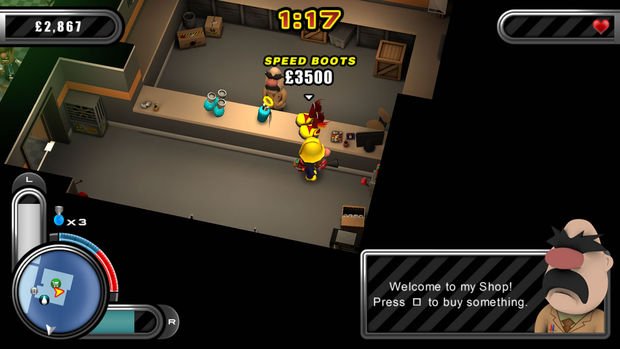 It really is a pretty straight forward and rewarding game. While it’s in no way perfect, it’s a completely serviceable roguelike for its price and for the Vita. If you can’t get enough of this genre, then by all means consider Flame Over.

Even though it doesn’t really set itself apart from the crowd, it’s got enough there to garner a following and perhaps deliver on future iterations or changes to improve upon the established formula.