For the past five days, every free moment I’ve had has been filled with quick battles in Fire Emblem Heroes. Whether I’ve been continuing in the campaign, taking on the armies of other players, or leveling up my newest characters in the training towers, my face has been glued to the tiny screen on my phone. It’s probably not that good for my eyes, but when I’m having this much fun, I don’t want to look away.

Will I still feel the same a month from now, when all the pomp of the launch period has subsided? I’ll let you know, but for now, this is the only TRPG I want to be playing. 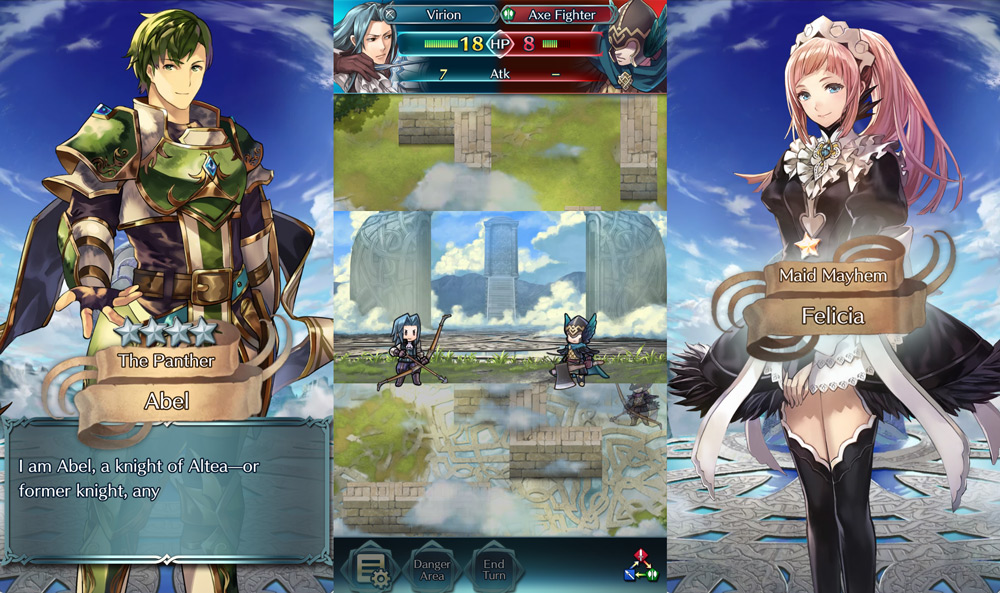 When I wrote my Review in Progress last week, I was crushing on the game. Sure, it wasn’t exactly what I thought it would be, but it was still a pleaser and I wanted to see if my attitude towards the app would be as enthusiastic today as it was then. With a few days and a dozen or so hours under my belt, I’m still crushing on the game even if the end product may not have been what I originally wanted.

When I first heard Fire Emblem would be on mobile, I initially thought we’d see something similar to the great mobile port of Final Fantasy Tactics: The War of the Lions. I thought it’d be a big, meaty experience. Instead, it’s something more along the lines of Fire Emblem Jr. All the necessary pieces are there, but the gameplay has been dumbed down so anyone who hasn’t spent the past several years perfecting their tactical strategies can still have fun playing it.

Restricting the maps to fit on the screen feels like a blessing and a curse: a blessing because battles are easy to map out and bite-sized for easy mobile consumption and a curse because such a small space mostly eliminated any chance of interesting map designs. The layouts here are as basic as can be and not one is memorable or engaging. Map layouts repeat often, both in the campaign and the other modes you can play, so battles don’t really differentiate themselves from one another. 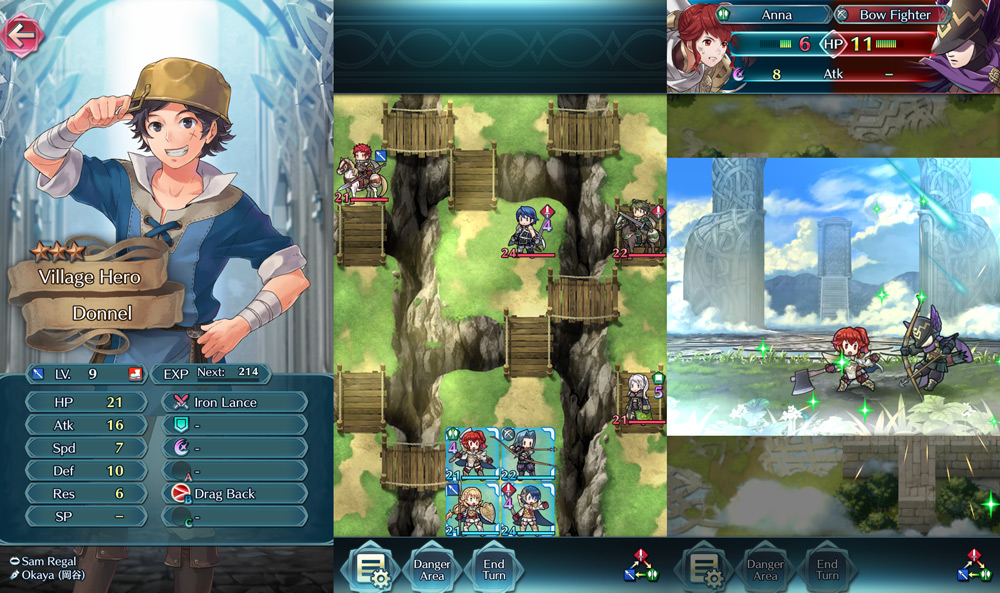 The combat is also a step down from what I’ve experienced with regular Fire Emblem games. Because the maps are so small, there isn’t much opportunity for clever placement of troops. Most of my matches had me rushing the enemies, and as the game went on that proved less and less successful against the brutes I would face. The game does tell you how much health a soldier will have after an attack, a tool that did allow me to actually plan a strategy when the situation called for it.

It may sound like I’m a bit down on the game, but I’m not. Once I was able to get past those two admittedly monumental changes from the typical Fire Emblem game, I started enjoying it and pushed myself to experience everything this free-to-play app had to offer.

I wanted to see how far into the story I could go just using the four starting characters. These troops are all 2-star characters, which makes them kind of weak. Even when I got Anna up to level 20, she would wipe pretty easily. I ended up getting halfway through chapter 5 before I saw a game over screen for the first time, and was able to move these starters midway through chapter 7 before I realized I would need a stronger army. My luck in the gacha-style character summoner has been mixed. I’ve received probably four 4-star characters, which are all mounted so I’m screwed against archers, and the rest have been 3s. According to game FAQ, it will take up to 121 tries before you are guaranteed a 5-star hero, which equals out to about 480 orbs, or $257. 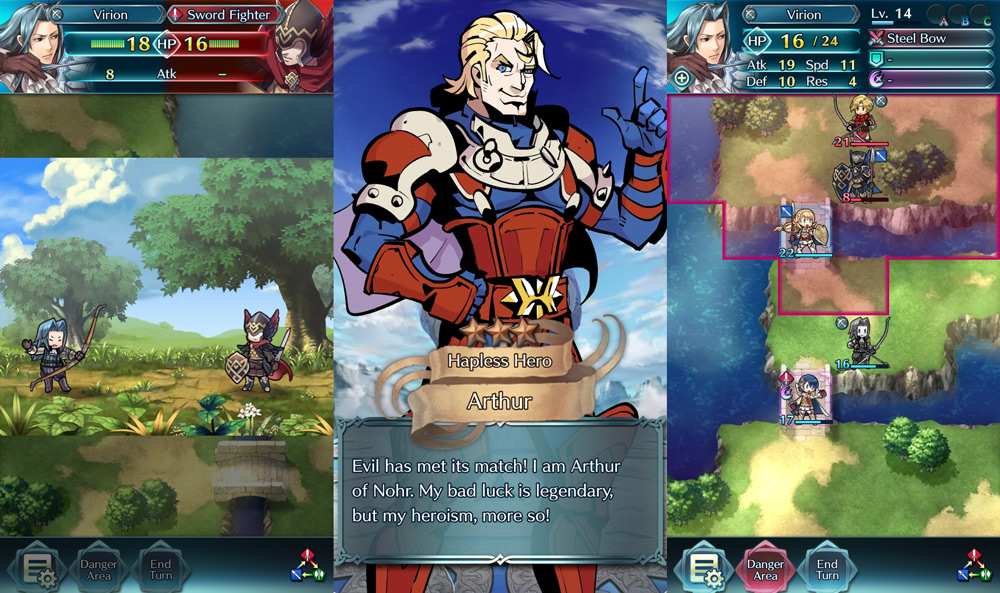 But there are other ways to get 5-star characters if you’re in this for the long run. When a character reaches level 20, you can unlock their potential by combining a lot of feathers, which are the spoils from your success in the arena, with badges, which you win in the training tower. This moved their star rating up a notch while knocking their level back down to one. Because the color of badges won in the training tower changes every day, playing it daily is of the utmost importance and eventually, I found myself playing more of the tower than the campaign.

Fire Emblem Heroes really is a game for people who can play mobile games for weeks and months on end. You can replay the campaign on hard or lunatic, which both take a hell of a lot more stamina, and the monthly challenges are also available at different levels with greater reward. So far there have been daily special maps with new, extremely weak characters to collect and I’ve played three arena battles each day to maximize the number of feathers I receive each week. Combining my efforts in the campaign, training tower, arena duels, and special maps has created a nice gameplay loop that allows me to play for 10 to 15 minutes at a time sporadically throughout the day. I haven’t spent a dime on the game, but I have used some of the platinum points that have been just sitting in my My Nintendo account on crystals and gems to level up my characters more quickly.

Like I said above, I don’t know how I’ll feel about this game a month from now when early adopters aren’t being as spoiled as we are right now. I don’t know if the stamina bar will become an issue for me then because it hasn’t yet. And I don’t know if I’ll simply tire of these tactical-lite battles. What I do know is that right now, whenever I have a moment, I’m playing this game and I’m enjoying it immensely. Nintendo, Intelligent Systems, and DeNA have succeeded on two fronts here: not only have they crafted a mobile game that is fine in its own right, but they’ve also made one that absolutely makes me want to play the next proper entry in the Fire Emblem franchise.