Just a dude and his bros

The fact that Final Fantasy XV starts with a broken down car is the perfect analogy to its development cycle. Some of us have been waiting 10 years for this game. Others couldn’t care less. Square Enix has been allocating so many resources to this world that was once part of the XIII universe, and now, before the eve of its launch, it’s even surpassed it in fanfare and white noise. We have a feature film with Hollywood actors, multiple spinoffs, DLC in droves, and if you reside in Japan, four demos.

It’s exhausting. But ultimately, worth the wait. 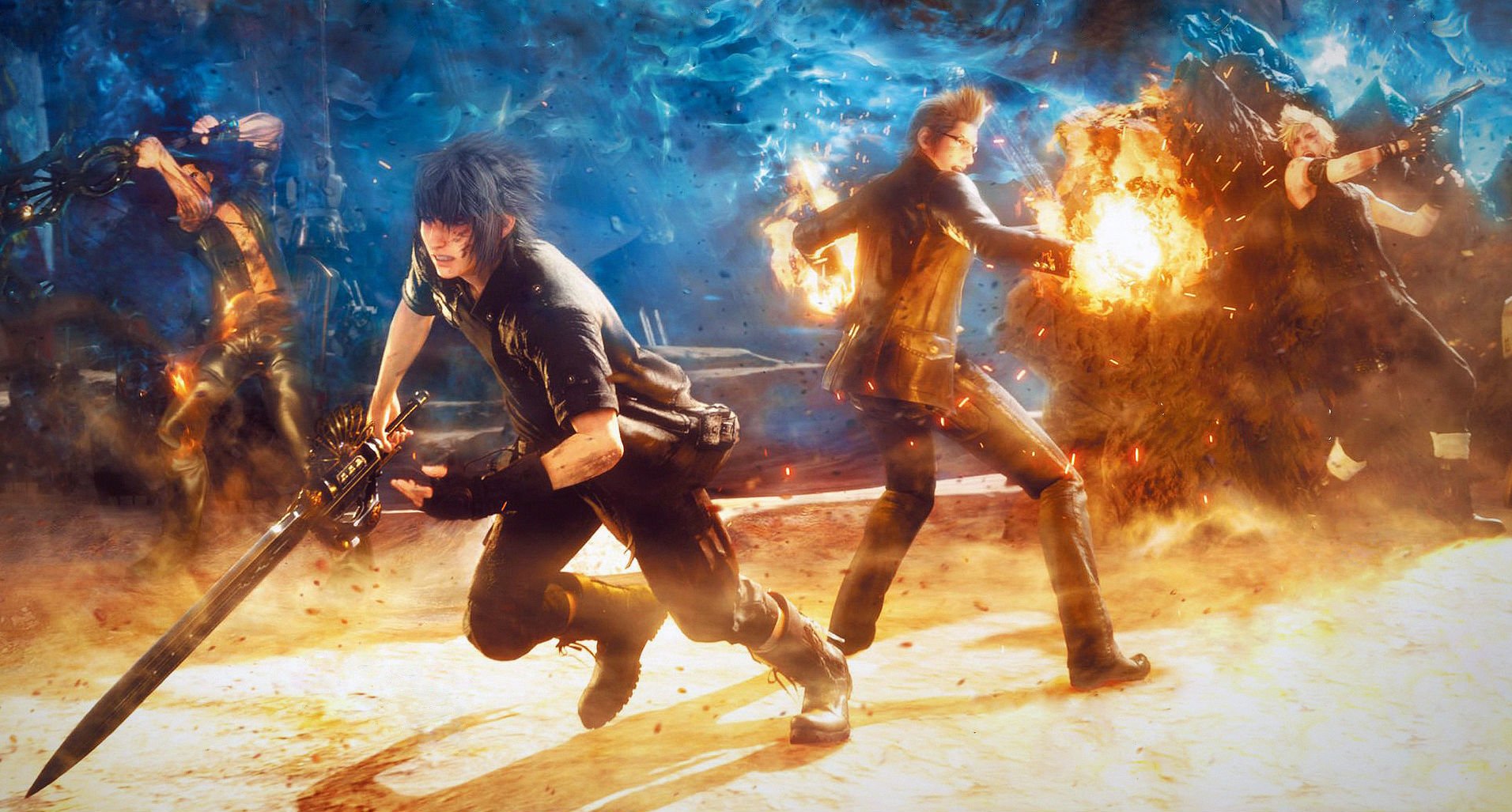 It’s tough to put into words how I feel about the entire brodown premise of XV. I love the idea of having the same core party from the start to grow with (albeit with some guests every now and then), but in one sense, it goes against the entire core idea of meeting new party members and telling new perspectives — something VI did to perfection. When we get to see the world through Terra’s eyes, or through Locke’s, our concept of the world changes along with that shift, but here, we’re given the static viewpoint of Noctis and his boys.

That would fall completely flat if Square didn’t actually make that static cast interesting, but it did. I quickly picked up on certain cues and tropes and welcomed them, like Gladiolus’ sense of overprotectiveness. Organic quests pop up not because they feel arbitrary, but because of, say, Prompto’s love of photography. There’s a hokey explanation of why Noctis is so powerful (it’s royal magic!), but everyone else feels grounded and realistic, if a little over-the-top anime at times (which is fine by me). Alternatively, there’s the bonus of not having that “this person is removed forever from the party” nonsense after you spent forever building them up (spoilers for decades-old games omitted).

I’m not a proponent of having to watch external media to “truly enjoy or get” something outside of a work that should stand on its own, but the Brotherhood anime and all of the extended universe stuff makes XV feel that much more grand. Normally when Square does an expanded/linked thing it unites multiple games into one world, but in XV, its Eos universe stands on its own. The voice acting for the principle cast is also excellent — they seem to give it their all, and there’s a ton of dialogue to sift through (more on that in a moment). For the supporting NPCs, including not just vendors but guest characters but other more major players, I wasn’t feeling it as much as the main crew, but nothing stood out to me in particular as phoned in.

I also really enjoyed how quickly everything hits the fan. You’re in the main overworld exploration loop within 10 minutes or so, and everything happens as swiftly as you force the critical path, or as slowly as you want to meander around. The plot is really easy to follow (barring some plausible and not-so-plausible twists of course), and for at least the first half, it should satiate a lot of you that are tired of the more esoteric games like VIII. The overarching concept is the ruling power of “good” (that’s you), versus the “evil” empire — kind of like XII. It’s done well and the cinematics are breathtakingly beautiful, plus the chapter system, which breaks down story missions, is easily digestible, and fun to come back to after an extended hiatus.

Even if you don’t buy into it, most will admit that Square Enix has master-crafted this world to the point where it feels like anything can happen out in the world map. Whereas a lot of JRPGs have stilted transitions between exploration and combat, XV does it effortlessly. One moment you’re in an abandoned building talking about a quest, and the next a seamless conversation pops up and you’re in the thick of a battle. The same goes for setting up future events — just like how a Pokémon game might hint at future legendary additions early in the game, so does XV. 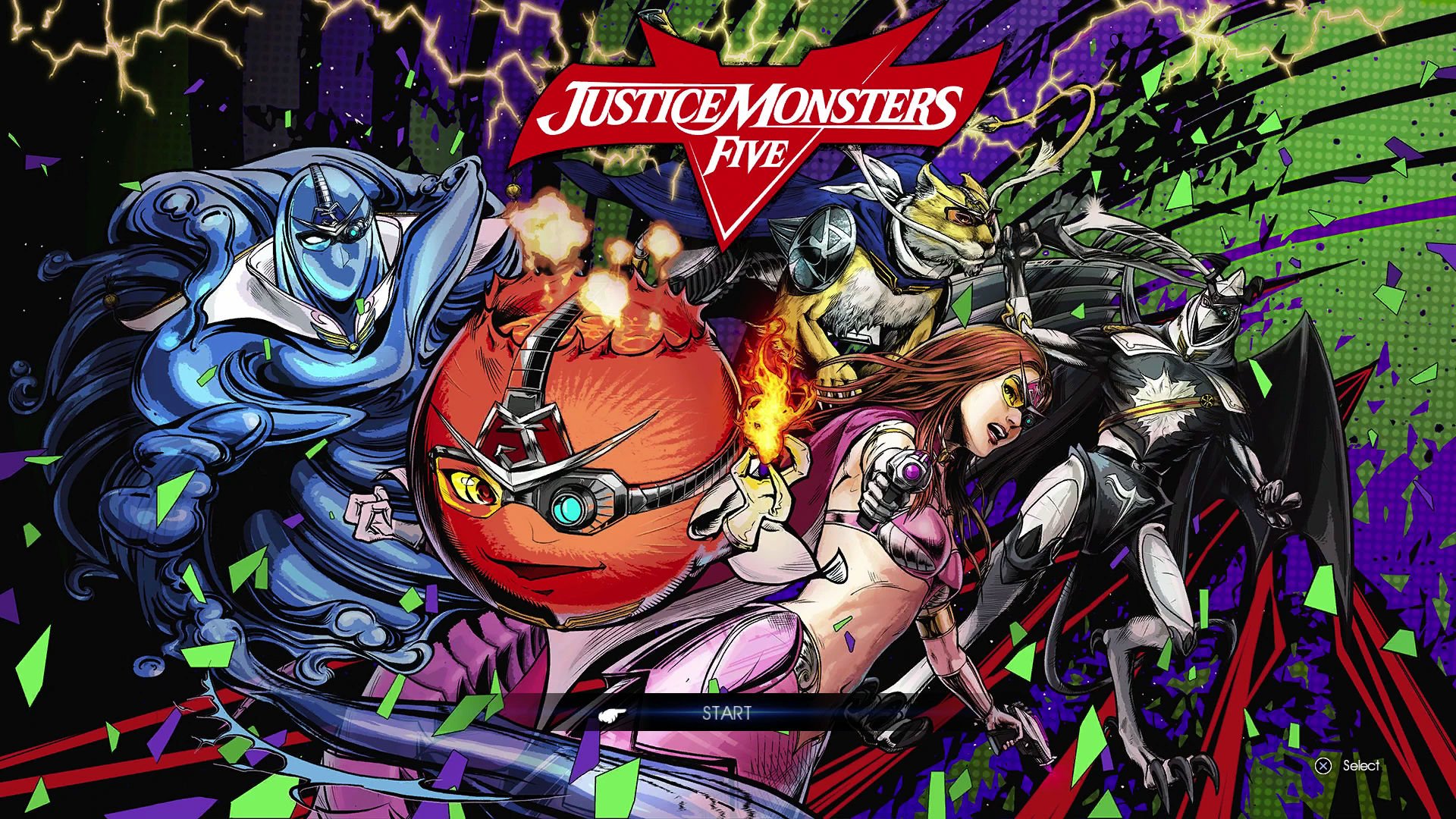 Speaking of landmasses, they’re pretty much the perfect size, and on par with an open world instance in an MMO. They’re not overwhelmingly large to the point where you’re going to be spending literal hours getting from point A to B (Xenoblade Chronicles, for better or worse) — they’re just right, filled with sidequests and collectibles that aren’t a chore to grab. It’s mostly because that 10-year development cycle was spent painstakingly orchestrating every little detail. It’s not just a shop you’re getting items from, but Kenny’s Fries. Or if you take a break to play a minigame, you might jump into the Justice Monsters Five pinball machine, which has an entire backstory to it.

Even staying the night at an inn, something that’s typically a black screen in other JRPGs, is a little moment with the group. There’s also just the right amount of nostalgia (and not overly so), with classic soundtracks to buy for your car, all of which create little slice-of-life moments that showcase the amount of polish Square put in. Seeing everyone with frozen hair after an ice spell is cast really makes you feel like you’re part of the “next generation” that was promised with this era of consoles. It’s a collective of little things that begs you to take your time (beyond min-maxing and item collection) in a way I haven’t seen thus far in this series.

Speaking of those JRPG sensibilities, it won’t take a lot of effort to pick them up, which is part of the problem. The experience system was weird at first, but eventually I got on board with it. In case you haven’t been following this lengthy development cycle, you can only really level up when you rest at inns or campsites out in the wild. It’s annoying to have to go through a large labyrinth and not actually progress your party along the way, but it just creates a new mindset where you have to go in prepared instead. You’ll also earn AP for a variety of different tasks, which are used to Ascend and gain new abilities. That’s all done with skill trees that mirror the perk system from Skyrim, and not something deliciously meticulous like the Sphere Grid (I wish a game other than Path of Exile would bring this back). 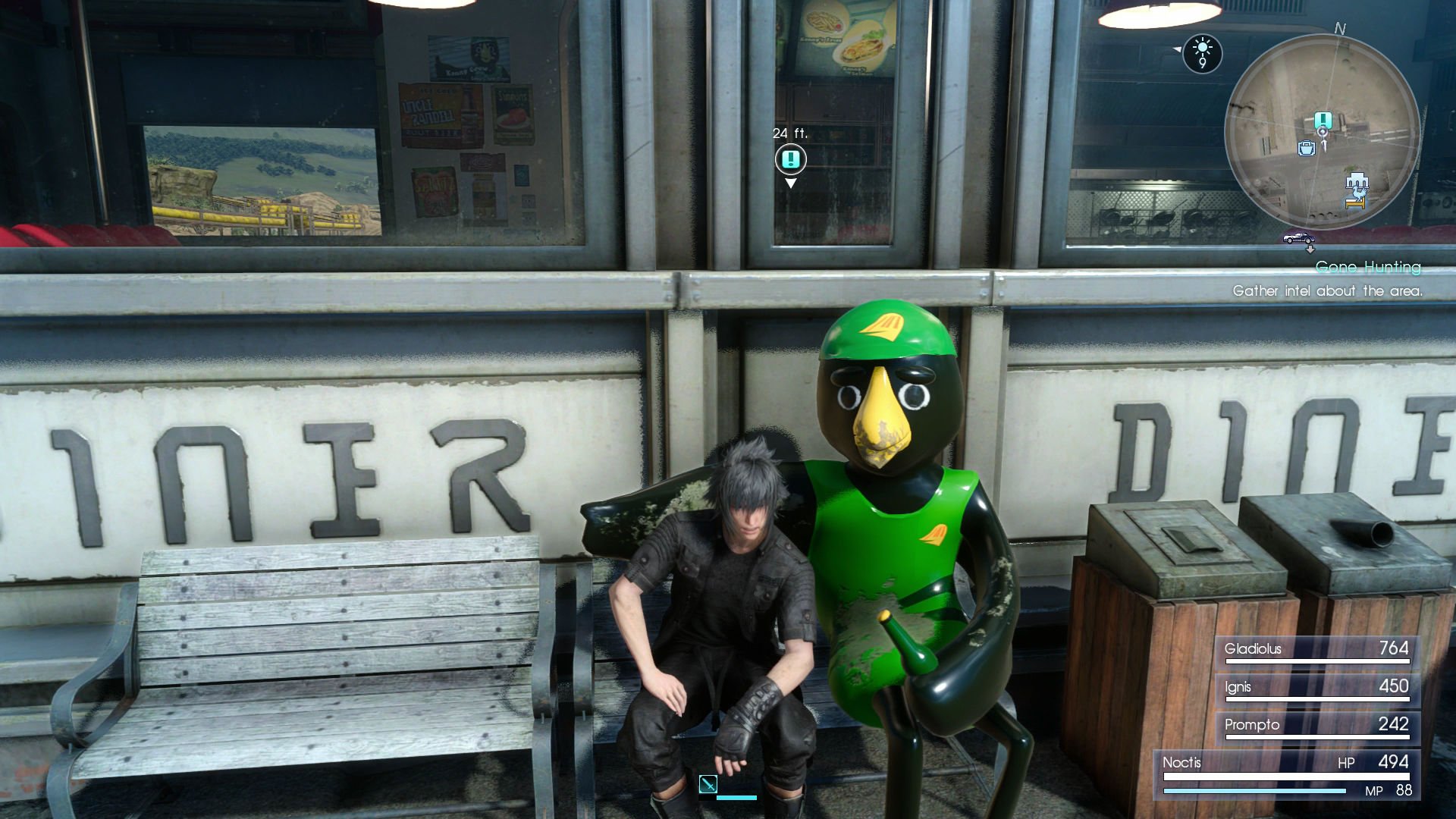 Square Enix could have also smoothed out a few other nuts and bolts type things too. Getting the Regelia car at the start is kind of a tease, because manually controlling it is limited to boring road-restricted straight line travel with tons of gates. I found myself using auto-travel (not to be confused with fast travel, as that’s not always available right away), which puts Ignis in the driver’s seat and lets you peruse menus while you wait to arrive. The Dragon Age-like car banter is fun enough, but you get plenty of that on the world map, and I wish the car felt like something other than a glorified mechanic. At the very least drives don’t take too long and you can access the shop while you ride.

Combat also took me a bit to acclimate to, because it’s incredibly mashy at first before it truly opens up. While it’s tempting to just label it as a flashier version of Kingdom Hearts II, there’s a method to its madness. You can eventually upgrade your Ascension trees to eliminate the MP cost of dodging if you’re precise (basically adding parrying to the game), for instance. Then there’s other nuances like blindside bonuses when you attack in unison with your party, and you can see other action game influences as clear as day once you unlock airdashing and really dig in. I really like how they handled your party, too — there’s NPC archetypes like the Warrior, Machinist, and Ninja, but really it’s a cross-class, non-restrictive system.

It’s not perfect though, because the way you earn back MP (going into cover), feels like a stopgap — like they couldn’t figure out how to balance player power creep and balance resources. The AI is also relatively helpful, but there were several instances where they basically just watched me beat on a dude by myself. It’s far from sloppy or glitchy (surprisingly, given how most open world games are these days), but I do wish that there was more control in regards to AI tactics and a more expansive customization system. There’s a lot to do, but little of it is menu-based (which is either a good or a bad thing depending on how you like your JRPGs served). 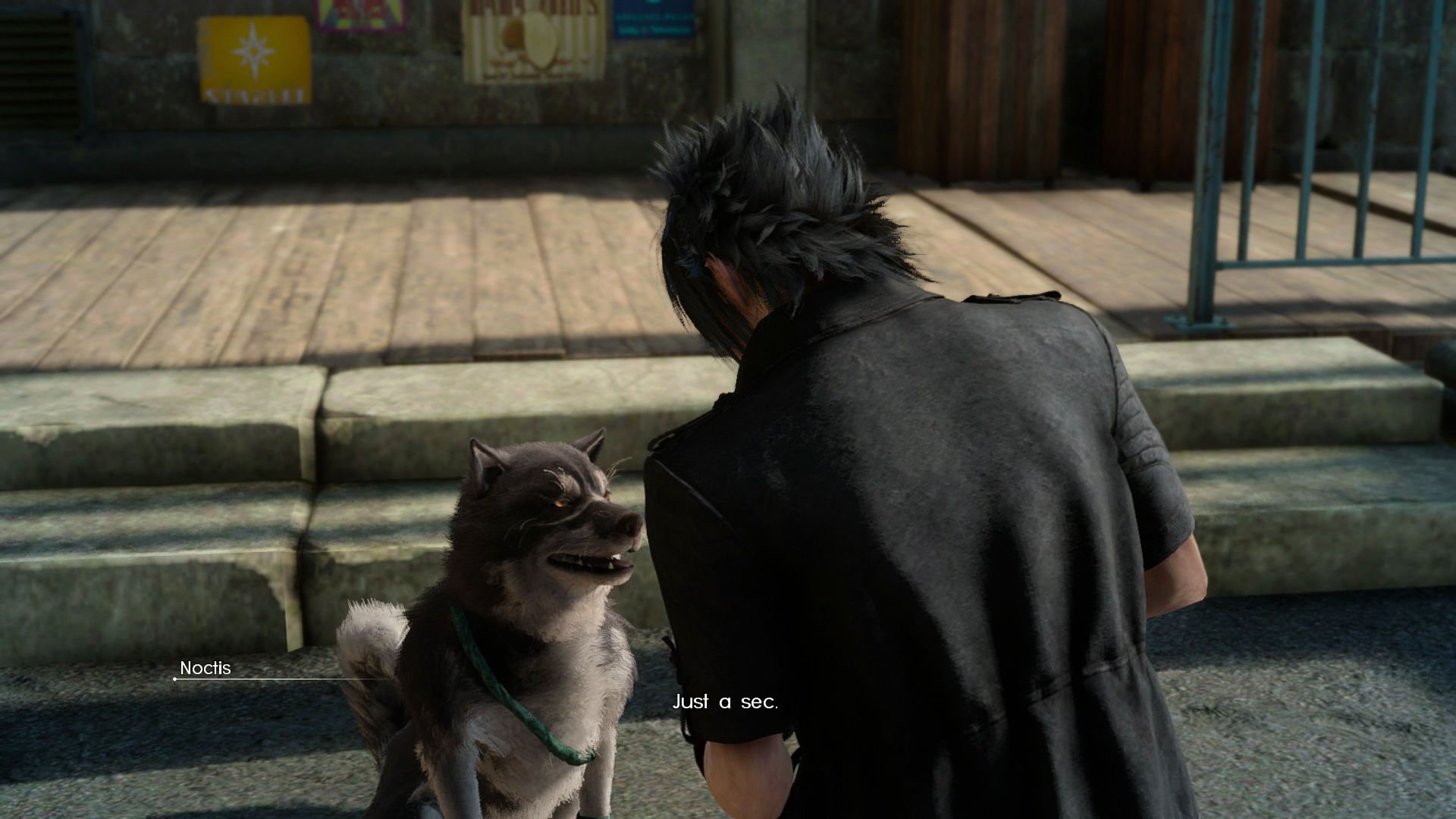 Finally, the magic system is kind of like the “draw” idea from Final Fantasy VIII with some tweaks. I dislike the finite nature of using spells as items, created from resources. I get the strategic focus here in that “magic matters,” and you can’t merely spam it in conjunction with ethers to get your way, but I usually ended up ignoring it entirely. I had no incentive to build into the magic Ascension tree at all — I had to kind of figure that out organically when there was a boss or enemy type that was weak to it. You can argue that this is Square Enix’s goal, funneling you into every playstyle equally, but it’s not as intuitive or as fun as nearly every other mechanic in the game, so it feels uneven.

As I’m typing this up now, I’m seeing a future where people buy Final Fantasy XV due to some of the more positive assessments (like this one), and walk away disappointed. Because if you loathe JRPGs, XV is not going to make you a believer. In a way it’s silly that Square spent 10 years making this, and it feels like a really shiny version of something it would have actually made 10 years ago. While a complete overhaul of the genre would certainly suit someone’s needs, XV suits mine just fine.