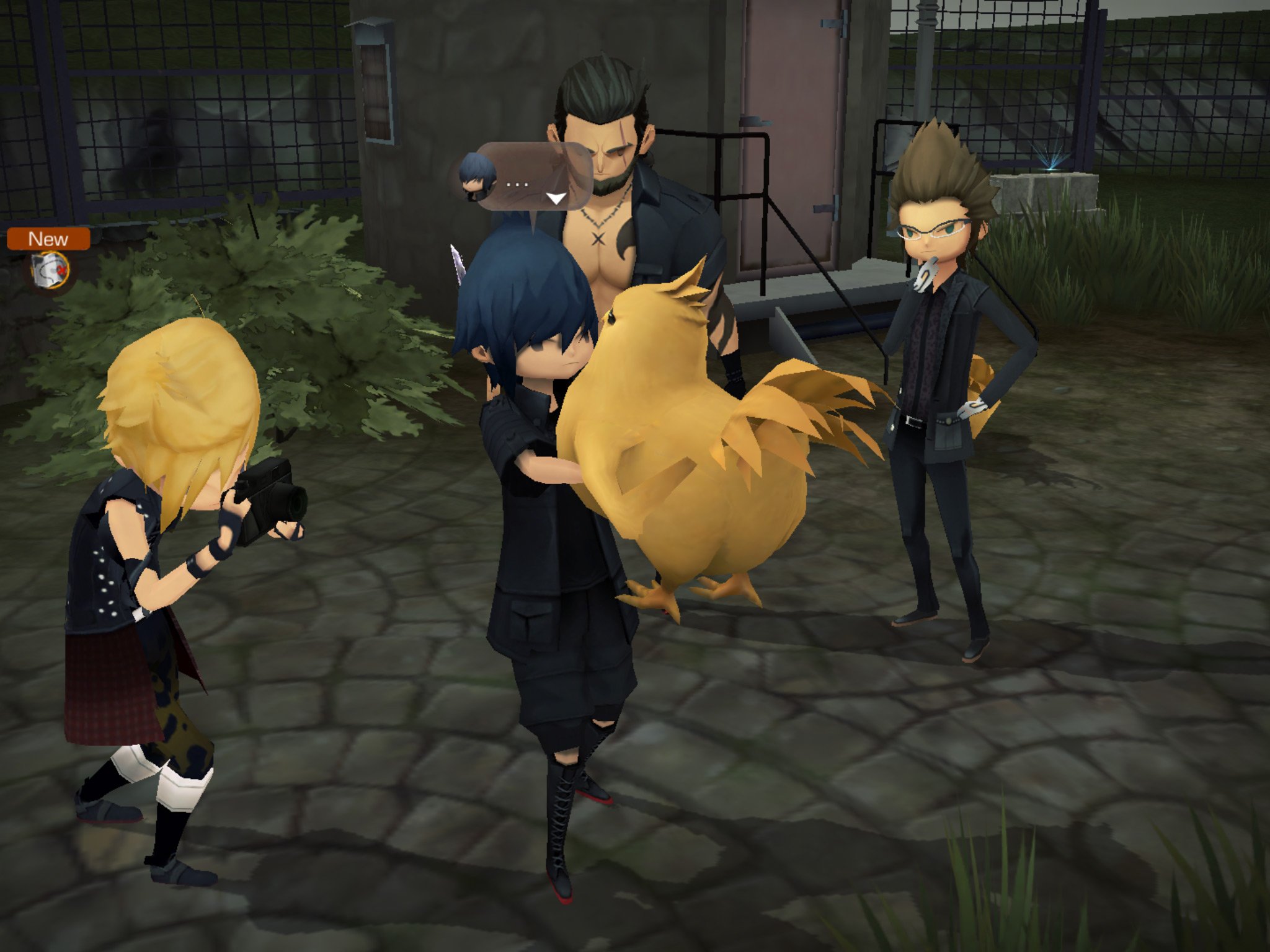 Take this Bro’d trip on a road trip

I still remember seeing the first teaser trailer for Final Fantasy Versus XIII 12 years ago. It was beautiful and captivating while also ripe for mockery with its emo-as-hell protagonist. 12 years ago that game was supposed to only be a few years away, but it wasn’t until a decade and a name change later we’d finally get our hands on it as Final Fantasy XV. 10 years is a long and no doubt expensive development cycle, so it’s no wonder Square Enix is trying to get the most out of this lush and lavish world it’s created.

Between the DLC, the movie, the VR fishing game, Brotherhood, A New Empire, and the rest of the mobile spin-offs, and the upcoming Royal Edition, Square Enix is milking this cow for all its worth. Final Fantasy XV: Pocket Edition is the latest product to emerge from those udders and is further proof Eos is a world worth exploring even if the journey isn’t nearly as exciting as it should be. 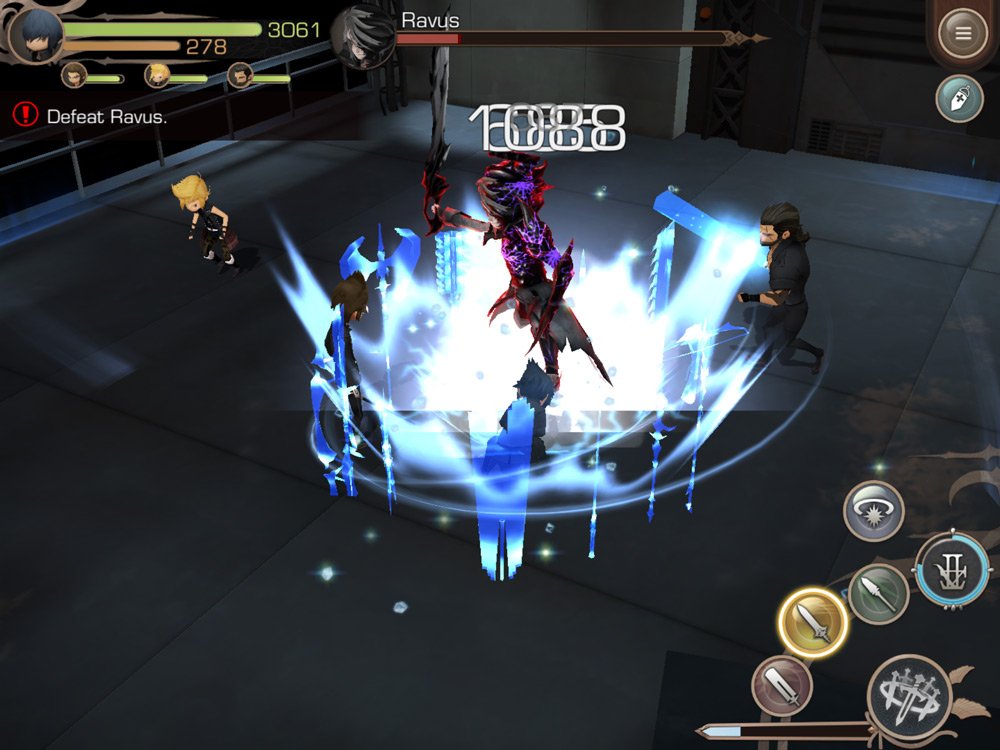 Taking a 50-hour console JRPG and reimagining it as a 10ish-hour mobile game is going to require a few sacrifices. In turning Final Fantasy XV into this Pocket Edition, Square Enix cut back on the story, controls, and graphics to deliver a more streamlined and casual telling of Prince Noctis’s journey to become king.

I have not yet played Final Fantasy XV proper so I cannot tell you what has been cut out of the story. What I can say is it’s very evident this is an abridged version of a story gamers got back in 2016. The main gist of the plotline is there: Prince Noctis and friends depart on a trip to his wedding when his home country is attacked by the Empire and his father is killed. As the new king, he must travel around to the burial sites of the old kings and obtain their power to defeat the Empire. The relationship between the guys is well told as the slightly repetitive banter between them is charming from beginning to end.

All of that comes across splendidly, but nearly everything outside of the main plot is left under-developed. The Six don’t get their due, many important ancillary characters only appear for a few brief moments even though their presence has lasting consequences, motivations for several characters lack clarity, and key events are left partially explained. There is an effort to flesh out the story through radios and readable documents, but it’s easy to see it isn’t everything it could be. When the credits roll, that’s it. There is no post-game content though I can return to previous chapters, something I have no incentive to do so as they don’t scale to my level.

Square Enix smartly chose not to attempt recreating a controller setup for Pocket Edition and instead embraces an automated experience. Everything is touch based and unlike the recent port of Square’s Life is Strange to mobile, it makes sense here. The third-person camera angle of the original game is dropped in favor of an isometric viewpoint ideal for the point-and-move controls. In combat, everyone attacks without input but it’s on me if I actually want to make it through each encounter in a timely manner. Noctis’s rush technique requires me to hold down on an enemy for a moment as the rush gauge quickly fills before he flies in for the attack. I can touch the available icons to switch between Noctis’s three prime weapons or use a one-time-use magic attack I pick up along the way.

Despite the fact everyone will attack on their own, I can’t just sit idly by and watch the battles unfold. Well, I can for a lot of them because this game is super easy but that ease is contingent on me actually paying attention. I need to be ready to heal at a moment’s notice. It’s on me to dodge or parry an attack when the icon presents itself and my team won’t activate their special moves without me tapping the icon when it appears.

Outside of battle and movement around the different areas I explore, touch controls are sparsely implemented. When in the car or atop a Chocobo, it’s on auto-pilot with just a few, non-critical steering options at my control. Late in the game, my handling of the car becomes crucial in one of the few action sequences that really works here, but it’s a fleeting experience.

Graphics is perhaps where the Pocket Edition most differs from the original, but it is still, in a word, gorgeous. Built with the Unity Engine, Noctis, Gladiolus, Prompto, Ignis, and all of Eos are recreated in an art style reminiscent of the underappreciated DS gem Final Fantasy: The 4 Heroes of Light. The picture absolutely radiates off my iPad screen, growing only more stupendous when I crank up the framerate and graphics settings to max. Even with the pop-in – and oh lord is there a ton of pop-in – the game shines as a prime example of just what is possible when you combine the mobile platform with a clear vision of how a game should look and play. Couple that with excellent voice acting and a magnificent score and you have what could be the best mobile RPG to date. 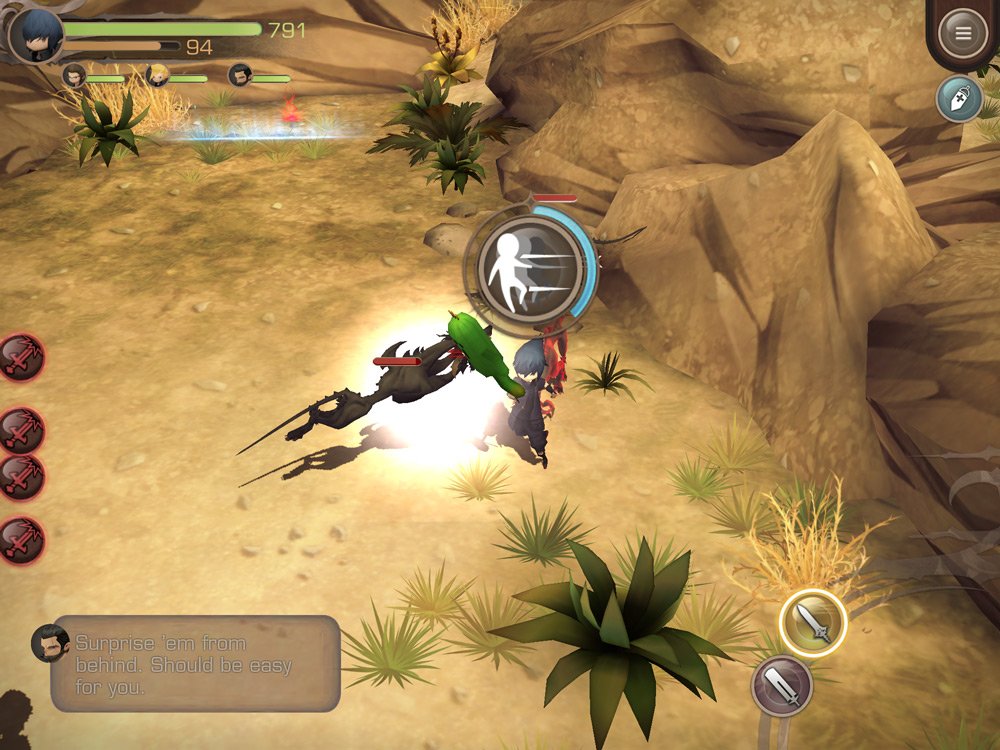 It’s hard to knock such an ambitious project for minor failings, but where there are so many they add up to a pretty big problem. Despite loving most everything the developer did with the controls, Pocket Edition’s context-based icons can be rather iffy. Noctis’s parry often requires an incredibly quick response to work, leading me to just hover my hand over the screen in anticipation of the icon. Taps of my partner special attack icons don’t always register, and when they do it can massively screw up the action.

For instance, when I hit the icon for one of Prompto’s special moves, the camera moves to him. If he’s far away from the action as he’s wont to be, it means I may miss a chance to hit a parry or dodge. The larger the battlefield, the more likely it is this will happen. Far more annoying than that is when the game misreads my finger taps, moving my character when what I really want to do is attack. Other times it’ll just decide to send Noctis in a completely different direction all on its own.

All of that is bearable when going through these small battles, but the combat really takes a dip when the game goes for the more cinematic encounters. In Altissia, a location I am sure is absolutely jaw-dropping in the regular version of the game based on its pleasant appearance here, the massive boss battle is divided up between standard attacks, action moments where I’m holding or swiping the screen depending on the command, and a sequence where I just tap as fast as I can to launch my Royal Arms at the beast. Enchanting to watch? Sure, but not at all fun to play.

Too many of these cinematic moments ruin what could be entertaining fights as it’s clear the combat is in the backseat of this story-driven narrative. There is very little skill required for these battles, something that goes in the face of my past experiences with the franchise. I’d put up with that if these portions of the game packed a dramatic punch, but most are cut short or oddly edited, crippling what should be highly emotional moments. 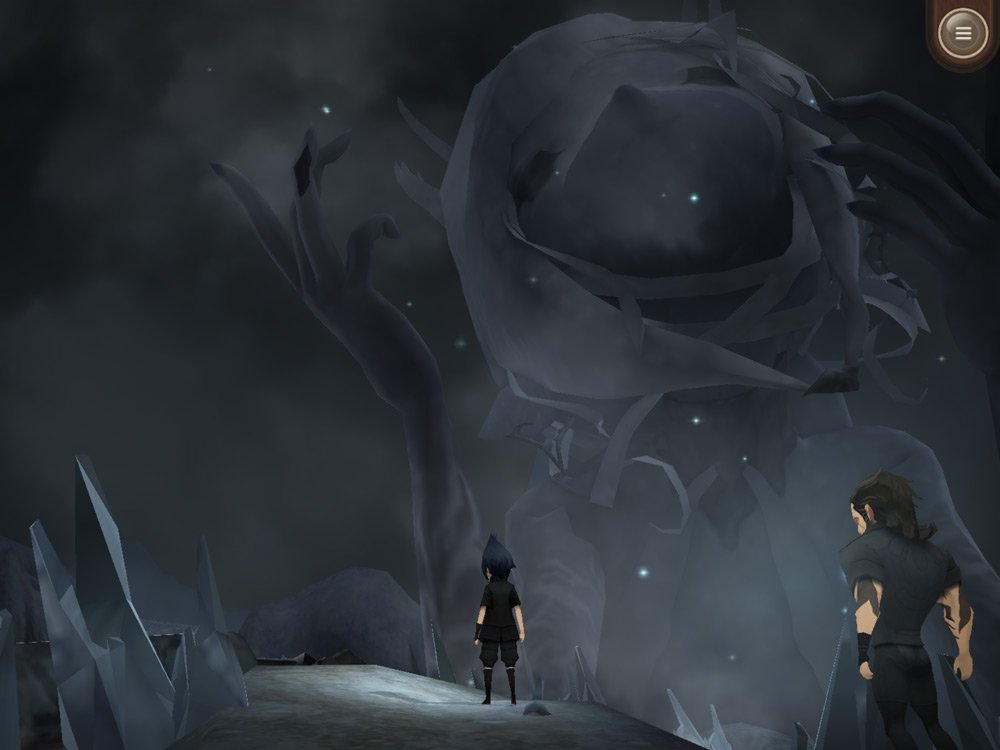 Other narrative decisions drag the experience out far longer than need be. In the penultimate chapter, Noctis is alone and without his powers. To proceed, I have to rely on stealth and, when I finally get a weapon, combat without my crucial rush skill. Stealth here isn’t bad and the forced segments don’t come close to overstaying their welcome. But Noctis without his abilities is not a Noctis worth playing. Without the ability to rush, I’m left with simply going hit-for-hit with my enemies. The parry and dodge icons only make themselves available on certain attacks, so most of these encounters devolve into me just spamming my Hi-Potions to survive. It breaks down what little strategy there is and does it so close to the end that it leaves a sour taste in my mouth for the rest of the adventure.

I don’t care for that particular design choice, along with that whole injured Ignis sequence where I get zero control over my character speed resulting in an endless barrage of admonishment from Gladiolus, but it’s one that works with the story Square Enix is trying to tell. What doesn’t always work is the game itself. Pocket Edition is buggy. It crashed on me twice and also forced me to manually exit out and restart the game when combat sequences refused to end after I killed all the enemies. Bosses regularly survive long past the point where their health has been drained and sound effects throughout the game are wildly inconsistent. Dialogue routinely overlaps when it’s not supposed to and, my personal favorite bug, charaktere fangen aus dem blauen heraus an Deutsch zu sprechen.

But bugs aside, what Square Enix has here is the perfect mold for its mobile games. Whether original titles or abbreviated retellings like this, the future of Final Fantasy or Dragon Quest or the Mana series is bright for smartphones if it chooses to follow this formula. I love what Final Fantasy XV: Pocket Edition represents for the future of mobile gaming, I just don’t very much care for the actual game.