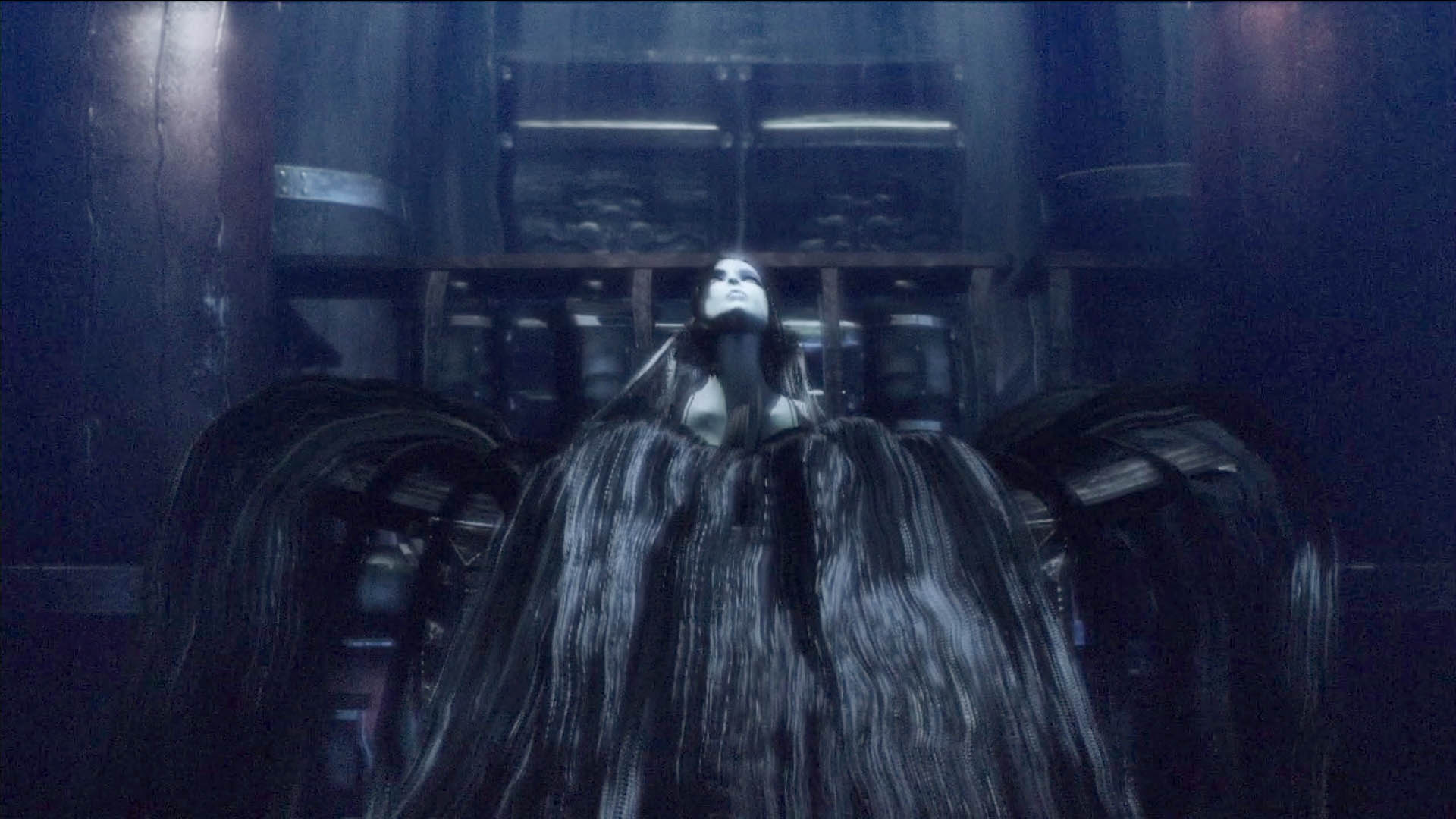 I was on the cusp of adolescence when I first played the original Fatal Frame. My friend Richard and I spent many a summer night with eyes wide from the horrors we had witnessed in the Himuro Mansion. The sequel Crimson Butterfly, has long one been one of my favorite games to replay when the fall months come around. Malaise crept in when The Tormented rolled around due to re-used areas and assets, but it managed to have some fun with your character’s home a la Silent Hill 4: The Room. Since Fatal Frame IV: Mask of the Lunar Eclipse never came to the US, I never had a chance to try it out.

As you can see, the prospect of a fifth game coming to the Wii U was enough to send me into nostalgic flashbacks. Using the GamePad to manipulate the ghost-capturing Camera Obscura? Yes, please. A more powerful system than the PlayStation 2 rendering these ghosts that frightened me when I was young? I’ll take two. I actually threatened Chris’ life for a chance to review this.

So it brings me absolutely no pleasure to say that Maiden of Black Water is like that horrible combination of liquid and garbage you find at the bottom of your trash bag.

This time around, the ghost-infested location is Mount Hikami, which is a stand-in for Aokigahara (worth a read if you want to hate trees), the real-life Suicide Forest. Initially, this feels like the perfect environment for Fatal Frame. A series that deals with ancient, forbidden rituals in Japan should feel at home in the suicide capital of the world. Unfortunately, the setting feels wasted as soon as you start playing.

For the first hour and a half, you’re locked on a ridiculously linear path. A supporting character gives you a tutorial on how to use the camera and explore your environment, and you can’t do anything except what she tells you. “Let’s go upstairs,” she monotonically asserts. If you try to go off the path, the camera forces you back around. If this segment was a few minutes long, it would be forgivable, yet this feeling of restriction creeps back in sporadically throughout. Want to go down that road in the forest? “You must find Fuyuhi,” the dialog box insists, as you’re pointed back towards your current objective.

Objectives are another unwelcome addition. Instead of having to explore Mount Hikami, you can almost always hold a button to watch a ghostly image of whoever you’re trying to find appear, heading in the direction of your objective. Although past games in the series have erred on the side of obfuscation, the areas you wander about are mostly small and confined. Having a constant push in the correct direction feels obtrusive, as if Maiden of Black Water doesn’t trust its own visual cues to convey your intended destination.

Using the GamePad as the Camera Obscura should make up for the lackluster exploration, but the control scheme fails to feel intuitive in any way. Be prepared to keep the pad at eye-level at all times, since pressing the camera button in your lap will make your perspective start at your crotch. You can either choose to use the gyroscope and analog stick or just the analog stick, and I would recommend the latter after the novelty of the GamePad wears off. The main problem with the gyroscope is that you’re required to rotate the controller to take certain pictures, but when combating spirits you still need to use twin stick movement to avoid attacks. Even when the pad is completely vertical the sticks don’t compensate, so you still have to hold forward to move forward, which sounds rational but feels awkward as all hell in practice. If you’re like me and invert your Y-axis, good fucking luck making this work.

You’ll still have to turn it like this with the gyroscope turned off, because Fatal Frame really wants to justify its use of the GamePad. Koei Tecmo didn’t think we could handle puzzles this time around, so the next best idea it had was that some keys could only be found by taking pictures with a correctly oriented camera. It’s not difficult, but it never goes beyond feeling like an afterthought. Even simple movement can be frustrating; occasionally, turning around becomes more arduous than fighting ghosts.

Battling ghosts with the Camera Obscura is relatively similar to past iterations, which the exception of tilting the camera to get portrait shots. Ghosts now have small fragments that float around them, and if you can take a picture with five targets, you’ll do more damage to them. There are also three different characters who have their own abilities with the camera, like charged shots or chains of 8 rapid-fire photographs. You can also upgrade the camera’s stats, improving its damage or the lenses that you find throughout Mount Hikami.

Snapping photos of the ghosts with these lenses is cathartic, and it’s heart-warming/chilling to hear that old Camera Obscura sound. That catharsis doesn’t remain for too long, since you’ll be encountering enemies about every two minutes. Tension never has a chance to build since there’s always a specter ready to pounce at you. Instead of dreading ghosts because they’re horrifying, you’ll dread them because of the repetition they bring. Pacing was not a priority here.

In keeping with the aquatic theme, there’s a new “wetness” gauge that fills up when you’re running through rain or attacked by certain ghosts. If you’re thoroughly soaked, you’ll take more damage, but your pictures become more potent. This risk-reward system could have added some much-needed adrenaline to the combat, but the change in damage values is negligible. The wetness gauge never goes beyond an excuse to ogle a bit of rain-soaked bra strap. There’s also an abundance of healing items that render both this status effect and any damage you receive toothless.

Tell-tale shiny glints betray herbal medicines and better film hidden all throughout Mount Hikami. This becomes increasingly far-fetched as you explore each area in the game entirely too many times, yet the items are always replenished. I’m usually not one to point out clichés, but Maiden of Black Water found a way to make items infuriatingly annoying. Y’see, you don’t just press a button to pick something up. You have to hold a trigger to slooooooooooooowly reach out towards the object while a bweeeeeeeeyooooooooo sound rings in your ears. Each time you do this, there’s a ~20% chance that a disembodied ghostly hand will grab your wrist, weakly shaking you and doing a minuscule amount of harm. It happens often, is never scary, and will make you angry. I can’t fathom why this mechanic was even considered, as it murders any semblance of pacing left in the game.

So many horror games are given passes for poor controls and mechanics if they manage to raise your heartbeat. Maiden of Black Water fails even in this regard. The aforementioned pacing is the crux of the issue, but unimaginative enemy and location designs are also to blame. While I can remember most of the enemies from the previous games, I’m having trouble remembering all of the ghosts from the one I just played. You’ll fight a bunch of shrine maidens and one memorable guy with a big knife, and one woman who convincingly moves as if she’s still hanging from the rope that she used to kill herself. The rest? They’re…people, I guess. Nothing as good as the Broken Neck Woman, or the Woman in the Box, or the Kusabi.

Fatal Frame: Maiden of Black Water seems so, so tired. Maidens, rituals, sacrifices, suicides, water, black hair growing and covering every surface…we’ve seen all of this done before and with more skill. Two small moments offer an enticing glimpse at what could have been: a short trip to a cable car station and a short episode where you’re monitoring surveillance cameras. The second I got to the modern-looking cable car station, I realized how much this series needs to go to new places. I was wrong about Aokigahara, it was more of the same. That surveillance episode subverts the camera theme, making you helplessly watch as phantoms slowly encroach upon your friends’ rooms. If new concepts like these were used throughout, this could have been something special.

At least there’s a hefty amount of game here. My first playthrough took about 13 hours, and there’s a bonus episode where you can play as Ayane from Dead or Alive. It’s not great, but playing Fatal Frame stealthily is at least a novel idea. There’s also the Nightmare difficulty and the bonus costumes you can unlock for further replayability. It’s too bad that most of that is backtracking through the same areas time and again.

I experienced four freezes in my time with the game. I’d recommend not looking at your photo list to see your recent pictures, as that’s what led to each freeze. The only way I could get out of the menu was by doing a hard system reset. That I wasn’t able to look at pictures in a game about taking pictures is a fantastic summation of my experience. Off-TV Play made too much sense for Koei Tecmo to get it right; it’s playable, but whether you’re using headphones or not, you can’t hear any of the in-game voices (dual audio, by the way!) or music. You need the TV for that.

Nintendo seemed hesitant to bring Fatal Frame: Maiden of Black Water overseas, and I’m sure it’ll be monitoring how it sells to gauge interest. Twelve-year-old me would be upset with this review, and he’d blame that asshole Zack Furniss for condemning the series to death with a damning review. He’d be in the comments below telling me that I wasn’t playing it right, or that it wasn’t my type of game. All I would have to say to him is this:

If this what Fatal Frame is now, I don’t want it anymore.