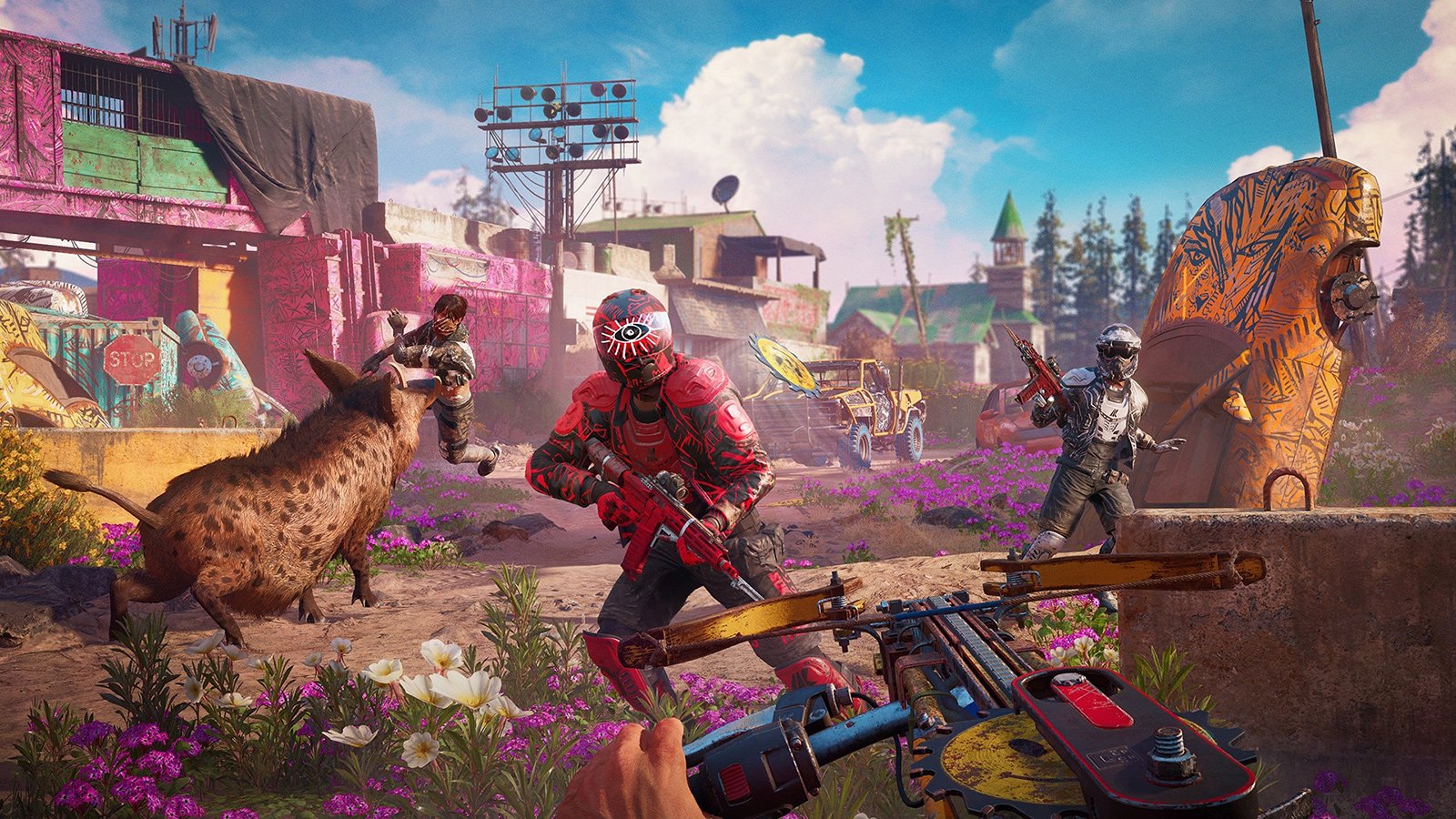 There’s no getting around it: Far Cry 5 had a feel-bad ending.

I respected Ubisoft’s decision to shake things up with a head-turning closer, but in the moment, after dismantling a doomsday cult from the bottom up (and putting an irreversible dent in Montana’s wildlife population), I only felt deflated. All that painstaking progress gone, and for what? Subversion’s sake?

I won’t dwell on the finale’s finer details, but if you’ve heard anything about Far Cry New Dawn, you’ll know that we’ve entered a cotton-candy-tinted post-apocalyptic era. This budget-minded release is a “continuation and a conclusion to Far Cry 5” with rowdy new foes and familiar yet worn-out faces. 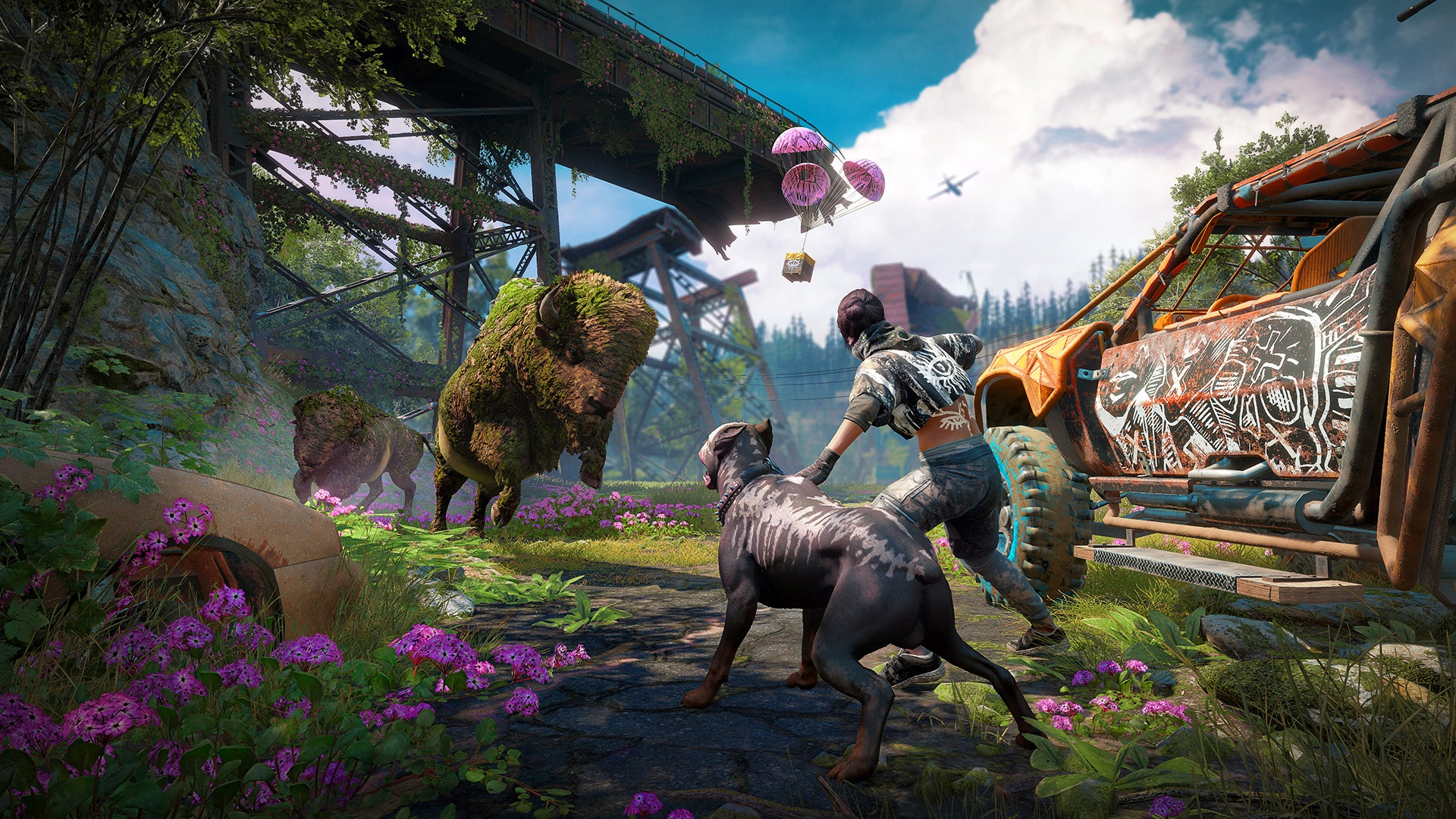 Straight to the point, you’ll get much more enjoyment out of New Dawn if you saw Far Cry 5 through to the bitter end, but at the same time, it’s very much comprehensible without those past connections.

Really, there aren’t that many moving pieces. 17 years in the future, the world is no longer on fire and nature is back with a vengeance. The surviving residents of Hope County have attempted to put down permanent roots, as have others across the United States. Thomas Rush, a guiding figure in the effort to rebuild society, receives a distress call from the good people of Prosperity. A sadistic and power-hungry group of raiders called the Highwaymen have rolled into Montana, eager to seize everything in sight before settling into their next bloody pit stop. In typical Far Cry fashion, opposing ideologies clash, and it’s suddenly up to you — this time playing as Rush’s nameless captain — to rally the resistance.

There are a few other complications, as there always are, but that’s the gist of this pulpy adventure. You’ll encounter the Twins, the uncompromising leaders of the Highwaymen, and also the remnants of Eden’s Gate, including our dear friend Joseph Seed. Rest assured, there’s closure for returning players.

You can think of New Dawn as a substantial standalone expansion to Far Cry 5. It’s not as ambitious in scope or story as a traditional sequel, but ultimately, that works in the game’s favor. Ubisoft trimmed down Hope County, gave it a vibrant makeover, and slipped a few novel quirks into the established formula. It was the right call. As much as I dug Far Cry 5, it was too big and uneven for its own good. New Dawn keeps most of what worked and bundles it together with a better sense of levity and pacing. Some emotional heft was left behind, but New Dawn‘s narrative never barges in to hold up your fun.

The designers have incorporated a major facet of Far Cry — clearing out enemy-run outposts and then resetting them to do it all again — directly into the story’s core progression. To build up your home base of Prosperity, you’ll also need to find and recruit specialists and collect corresponding resources.

Silently pick off an outpost with your wholesome grandma sniper or go in guns blazing with an indestructible pet warthog, and you’ll earn precious Ethanol that’s needed for base upgrades. Re-challenge that same outpost, and better rewards will be up for grabs, albeit with tougher opposition blocking the way. Whereas past Far Cry titles held back the reset option for the postgame, it’s front and center here. The system meshes nicely with New Dawn‘s so-called “light RPG” mechanics. In short, weapons have four tiers, and the same goes for the Highwaymen who, at their highest rank, will come after you decked out in hilariously resilient extreme-sports armor. But the key word is light.

You’ll scrounge for trinkets while exploring named locations around Hope County and use these doodads to craft increasingly potent SMGs, shovels, sniper rifles, bows, and saw launchers capable of bringing down high-rank enemies. As you carve your way through the map and earn enough stuff to upgrade your base, higher-tier weapons become craftable. That’s it. There’s no real loot system. 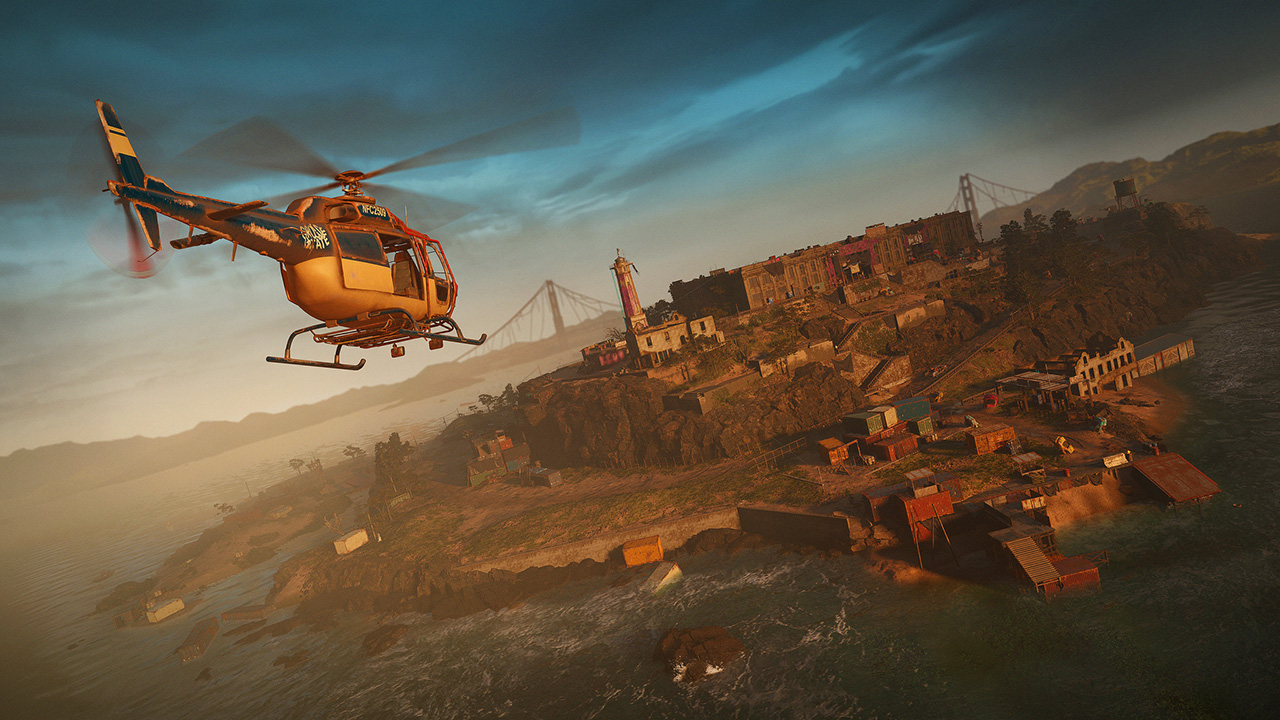 At its worst, scavenging for resources is mindless cleanup duty in between firefights. At its best, it’s a non-issue; you can get parts by playing an entertaining new activity. I don’t mind picking up gears and bundles of tape, but the process is by no means engaging, which feels like a missed opportunity.

Aside from a single mission super late into New Dawn‘s story, I never seemed too underpowered or overpowered. The balancing felt right — tough but fair, with room for cheesy AI partner tactics when I was in a jam. If you hate the sound of grinding for materials, just remember to cash in animal skins after hunting and be sure to clear at least a few Expeditions for large payouts. That’ll get you to the end.

Expeditions are one-off levels scattered around the US in which you drop in via helicopter, snatch a kinda-sorta hidden item (which can then be tracked by infinitely-spawning enemies), and get out alive at a nearby extraction point. They’re like bigger, better, more challenging outposts that range from a theme park to Alcatraz to a space-station crash site. Co-op players, in particular, will be in heaven. I’ve tended to tackle Far Cry story missions alone, but with Expeditions, I actively want to partner up.

With that in mind, New Dawn is the purest fun I’ve had with Far Cry to date. The action is constantly moving and frenetic in all the right ways. Every weapon is a joy, as is the open-world mayhem. If the developers can get me to expand my horizons beyond just the bow, they’ve done something right. 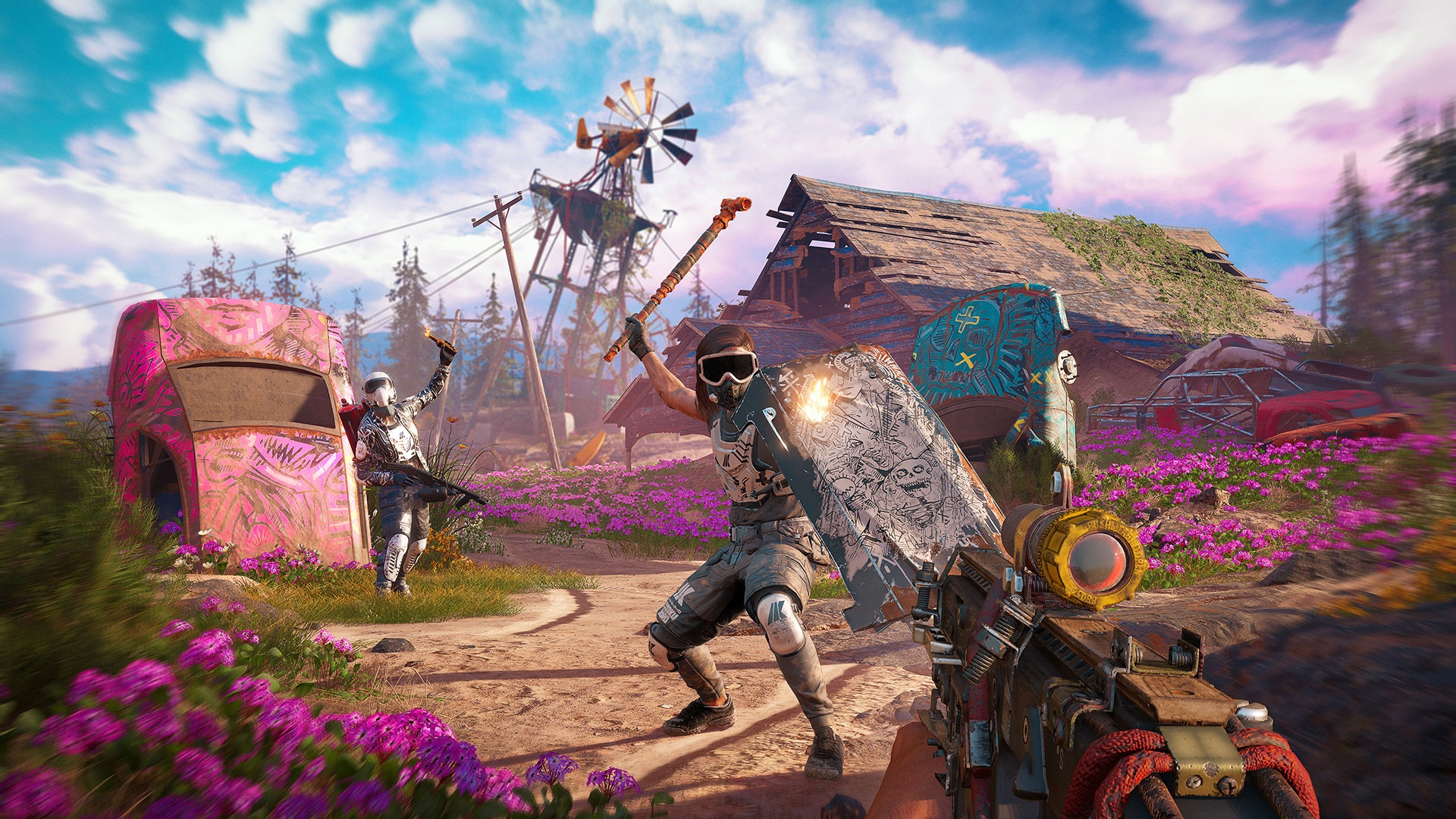 There is a trade-off, though. The Twins (and the Highwaymen at large) seem too one-dimensional. They’re more threatening than fleshed-out. And the plot — aside from the odd wrinkle here and there — could’ve been less predictable. It’s lighter than we’re used to. That said, I had such a good time, and I appreciate that the main story and side missions don’t overstay their welcome. You can burn through New Dawn in a weekend if you hurry, or you can stick around long term by running Expeditions to perpetually boost guns and perks. At this point, my captain absolutely shreds mutated monster bears.

The best narrative beats in New Dawn still fall short of reaching Far Cry 5‘s highest points, but this standalone sequel is a more well-rounded experience overall. Ubisoft knows when to be serious and when to let its silly flag fly. This time, the top priority was setting the stage for player-driven hijinks, not forcing story moments with a heavy hand. After all the doom and gloom sowed by Joseph Seed and his cohorts, Far Cry New Dawn resonates as a sorely-needed palate cleanser before the next full romp.

Looking ahead, the series is equipped to veer off in a bunch of compelling new directions. I don’t know what to expect from the future of Far Cry, and that’s so exciting. My mind is buzzing with possibilities.