A trip to Mars to fight alien scum seems like as good an excuse as any to revisit Far Cry 5.

Despite the main game’s story issues and its propensity to rip you out of open-world hijinks for the sole purpose of hearing monologues from the Seed Family up close, I dug it. I dug Montana as a setting way more than I ever thought I would. Some people show up for every Assassin’s Creed game, but not me; Far Cry is my weakness. I’m compelled to check off every task in these ridiculous sandbox action games.

The self-contained campaign Lost on Mars is the second of three DLC packs planned for Far Cry 5, and compared to last month’s Hours of Darkness and next month’s Dead Living Zombies, it has the most immediately appealing premise. Playing as pilot Nick Rye, you’ll team up with an AI presence and the series’ longstanding crude dude Hurk to prevent an invasion of alien crabs. Or something like that. 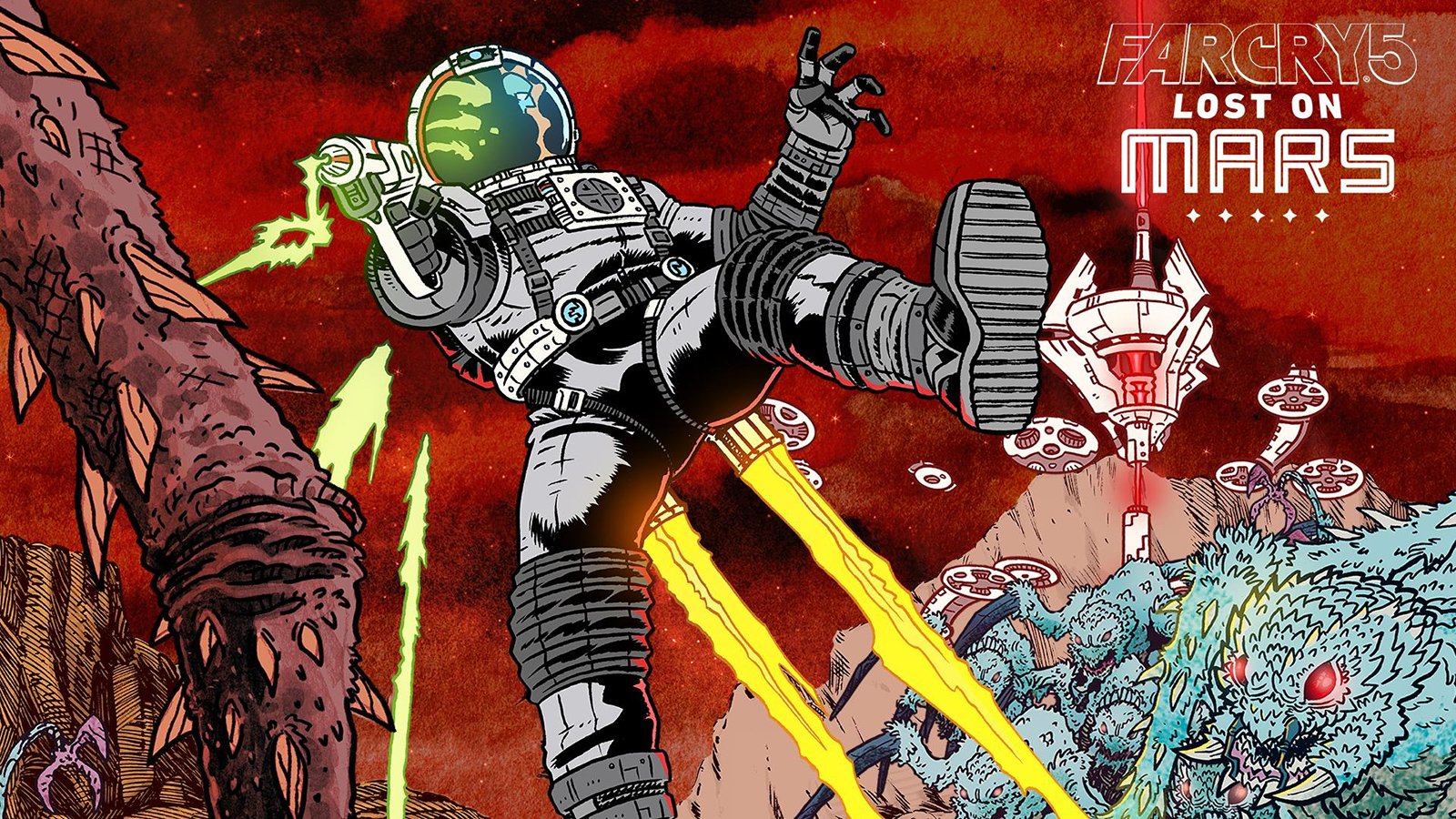 Lost on Mars is a step in the right direction as far as Far Cry 5‘s DLC schedule is concerned, but during the few hours it took me to reach the credits, I kept thinking that I’d rather be running amok in a longer, more fleshed-out and unique-feeling side story in the vein of Far Cry 3: Blood Dragon. That beloved game had its own thing going for it and fans rightfully ate it up. Lost on Mars, on the other hand, feels like a big multi-part side quest in its own zone. It’s not awful or anything — it’s okay, if a little hollow.

After getting your ass to Mars, you’ll find that Hurk is nothing more than a floating head (but he’s still as talkative as ever). Clearly, some bad stuff has gone down prior to your arrival. The rest of his body has been neatly split apart and scattered around the dusty martian landscape, just begging to be collected as you (much more importantly) work to save all life on Earth. In the meantime, you’ll be able to transfer Hurk’s consciousness into a bandana-wearing robot companion. A brobot, if you will.

The bulk of your time in Lost on Mars will be spent ascending Ubisoft Towers in low gravity with the aid of a jetpack, fighting heavily-armored alien queen mini-bosses using assorted sci-fi blasters, and powering up bases with collectible energy nodes at the request of Hurk’s new AI friend, Anne.

I had a fun enough time boosting my way across Mars. In a nod to Tremors, the spider-like aliens will surface whenever you set foot on sand, so there’s some honest-to-goodness platforming involved here. That said, they’re also just around. And some of the creatures can fly. They’ve all got weak points, and if your aim is off (or you’re otherwise overwhelmed by groups of bugs firing poison your way), you’ll find yourself constantly cycling between weapons while you wait for your “ammo” to recharge.

There’s light progression as you unlock guns, grenades, and equipment like the wingsuit. A few missions are a bit more story-driven. But, by and large, Lost on Mars is about blasting bugs in a not-that-visually-interesting landscape. It’s a stripped-back Far Cry experience you can clear in an afternoon.

While this DLC has the kind of silliness I’d like to see the Far Cry series confidently embrace and it mostly sounds good on paper, the end result is bare-bones. Lost on Mars feels like a middle-of-the-road effort when it could’ve been so much more substantial and imaginative. The premise deserves better.