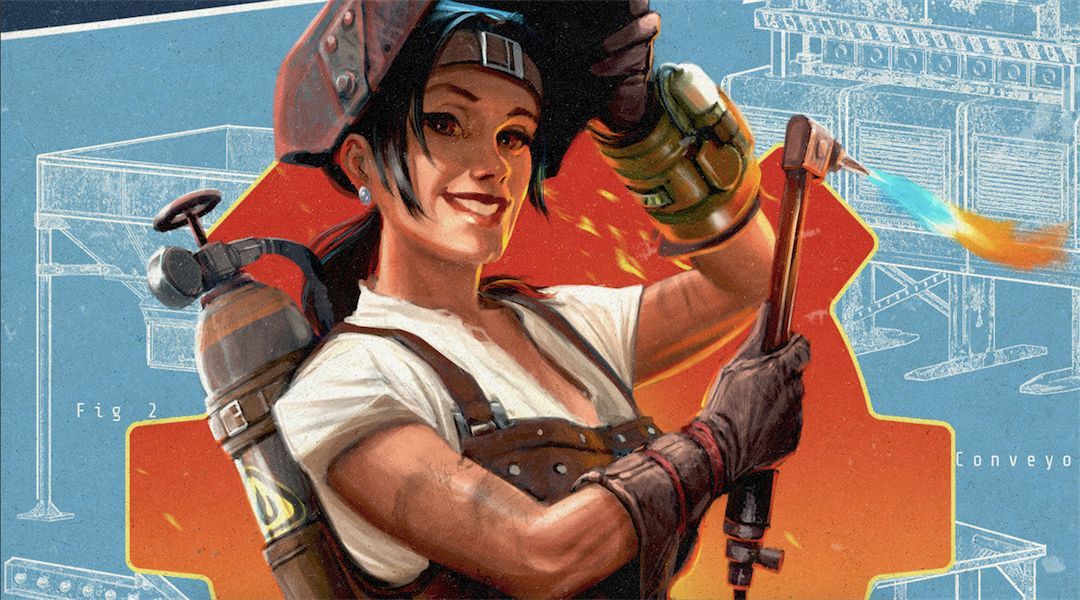 Casualties of the industrial revolution

If you played Fallout 4‘s Wasteland Workshop DLC, you already know the basics of its latest offering, the Contraptions Workshop. Much like the previous pack, the Contraptions Workshop doesn’t add any new quests, characters, or locations to explore. Instead, it provides a suite of new tools and items for the settlement crafting system and nudges the player to build their own fun.

As the name might imply, the Contraptions Workshop focuses on machines. It adds several entirely new categories of widgets, gizmos, and whirlygigs to the workbench to tinker and fuss with. But, is any of it fun enough to justify coming back? 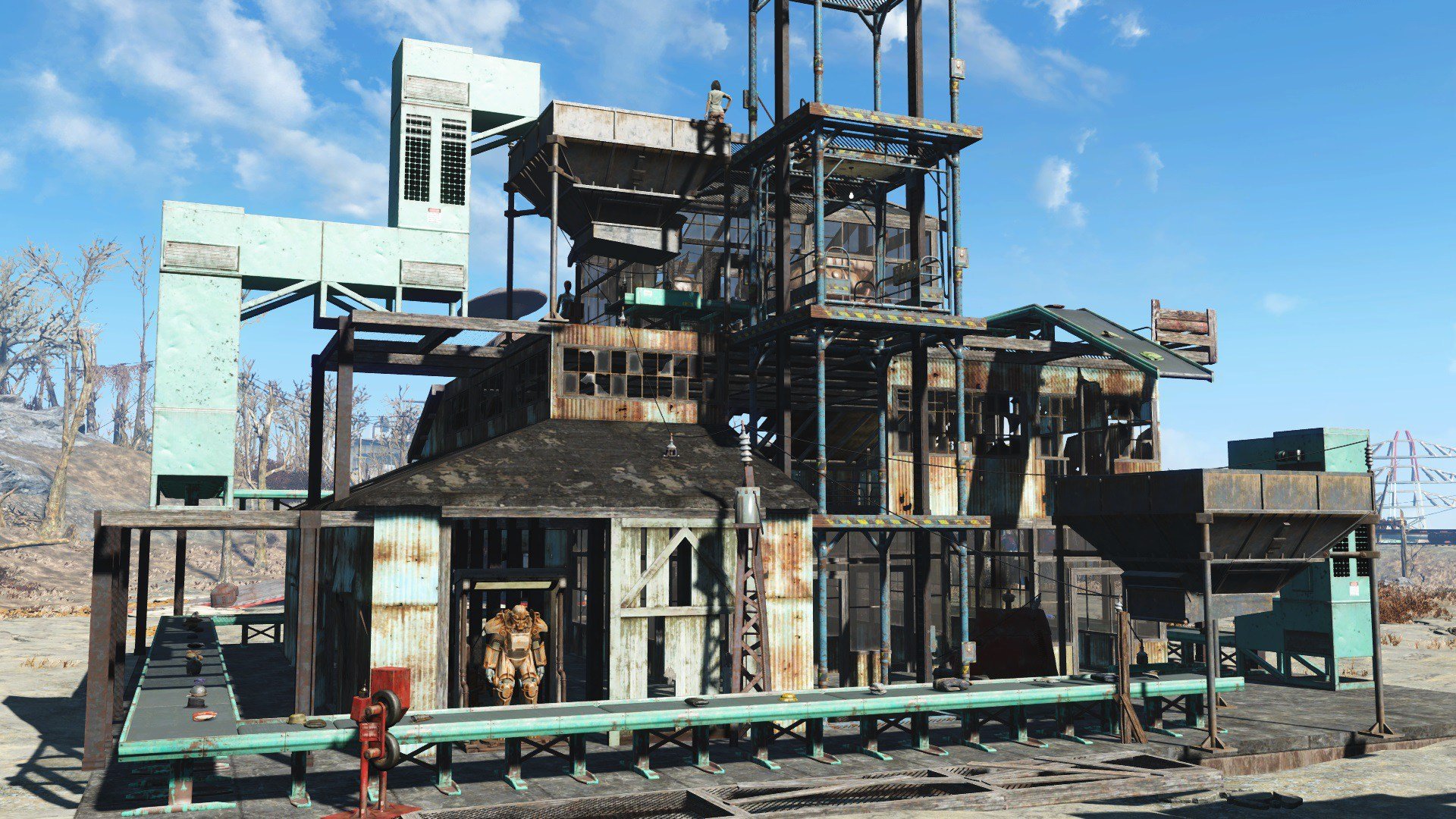 The new devices include everything you could possibly need to make your very own Dr. Seuss living room set or recreate a game of Mousetrap with your settlers. The standout items of the DLC are themed around elaborate, impractical, and ostentatious machinery, the tone firmly planted in the “wacky wasteland” side of the Fallout universe that encourages you to build a a two-story factory assembly line that eats guns, armor, and supplies to spit out Valut-Tec lunchboxes just because you can.

The manufacturing items include a dizzying array of devices. There are ramps, both large and small, long and short, corkscrewed and straight. Conveyor belts, rollers, and sorters can move items around in pointless loops or deposit junk in vacuum-powered collectors for later retrieval. An adjustable junk mortar can catapult anything (or anyone) dropped in it. And a new system of electronic logic gates allows wasteland architects (who have the serene patience of an exalted Saint) to wire up their settlements in increasingly complex ways. There are even elevators, both for items and people, that can be installed, perfect for those would-be Wasteland apartment slumlords.

The berth of the options available and what you could theoretically do with them is genuinely impressive. There is a sort of off-kilter ambition to the whole thing, a design team somewhere celebrating just how clever, self-governing, and durable the world they’ve made is. That all these Rube Goldberg devices can really work based on the game’s physics and ruleset is fascinating. Unfortunately, using all these new pieces only hammers home how clumsy and limited the construction tools in the settlement system really are.

If you thought trying to slap together a simple hut could turn into a frustrating nightmare of misaligned parts and walls with gaps in them, you haven’t seen anything yet. Trying to assemble a byzantine mechanized apparatus while still using the same fiddly snap-on tools that make it impossible to wrangle a bottle of Nuka-Cola to sit properly on a shelf has predictable, joyless results. While it is entirely possible to make some neat devices with these new tools, I expect most people’s actual inclination to do so will taper off somewhere around the third hour they spend trying to get a freaking ball ramp to clip in the right goddamned direction.

The manufacturing equipment isn’t all silly devices and jokes; there is a practical edge to it. The new pieces also include industrial manufacturing presses, machines that will eat raw supplies to stamp out ammo, guns, clothes, food, or different pieces of junk. Presumably, this is intended to make raw materials have a more meaningful and immediate value.

While the ideal image is some elaborate factory that automatically sucks in pieces of random junk from nearby containers (there is a device that will do just that) and funnels them through a complex series of belts and ramps to a press that will stamp them into shiny new items, the reality for most players will likely be different.

It will be them placing a single ammo press in the corner of a settlement and manually depositing EXACTLY as much scrap in it as needed to spit out a box of ten .45 caliber bullets. Upon watching the bullets drop onto the floor, the player will quickly calculate how much time it took to pull those supplies out of storage, walk to the machine, deposit them, wait for the press to clatter into action, and then scoop up the measly ammo pack. They’ll then shrug, turn the game off, and realize they’ve made a grievous error with how they’ve chosen to spend their limited time on earth. 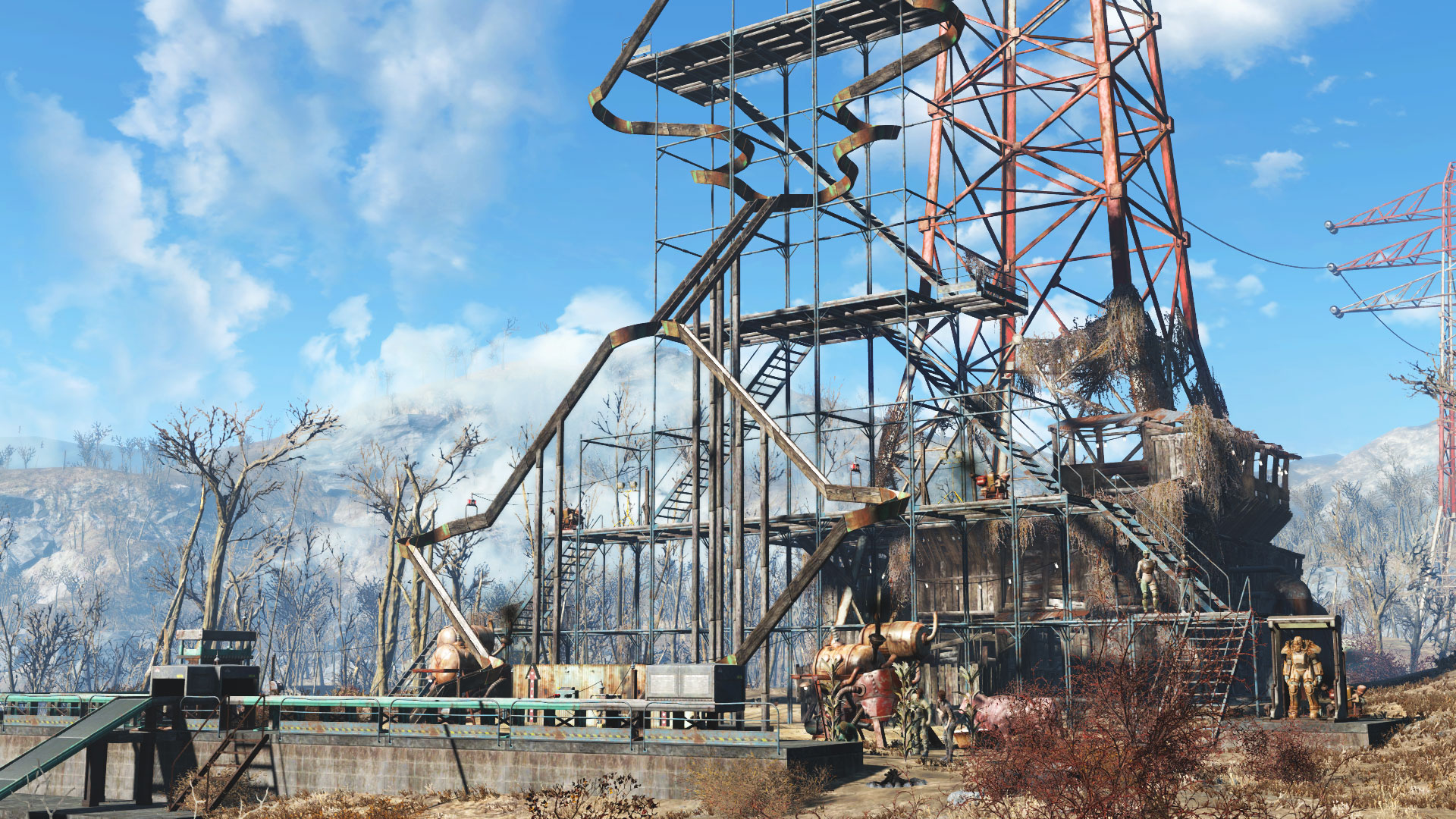 The whole time I was tinkering with my (semi-functional) factory I kept wondering who this expansion was for. I tried to picture in my mind’s eye the person who would be truly stoked about this content. I never got closer than a blurred-out shadow, the kind of dim figure who’s interviewed as a mob informant on 60 Minutes.

It’s all very interesting, but in no way is any of it compelling. I mean, yeah you can make an elaborate trap designed to launch slabs of Radroach meat into Preston Garvey’s nagging face whenever a laser trip-wire is triggered, but why? Sure, you can throw it on YouTube, but unless you live for #engagement that isn’t likely a motivating factor.

I suppose you could use the factory items to trivialize the Survival mode. Set up a community of scrap collectors so you can stamp out bullets and food on a whim and remove all the carefully tuned scarcity of the extra challenge mode. But at that point, why bother? Just play the regular game with combat dialed up. 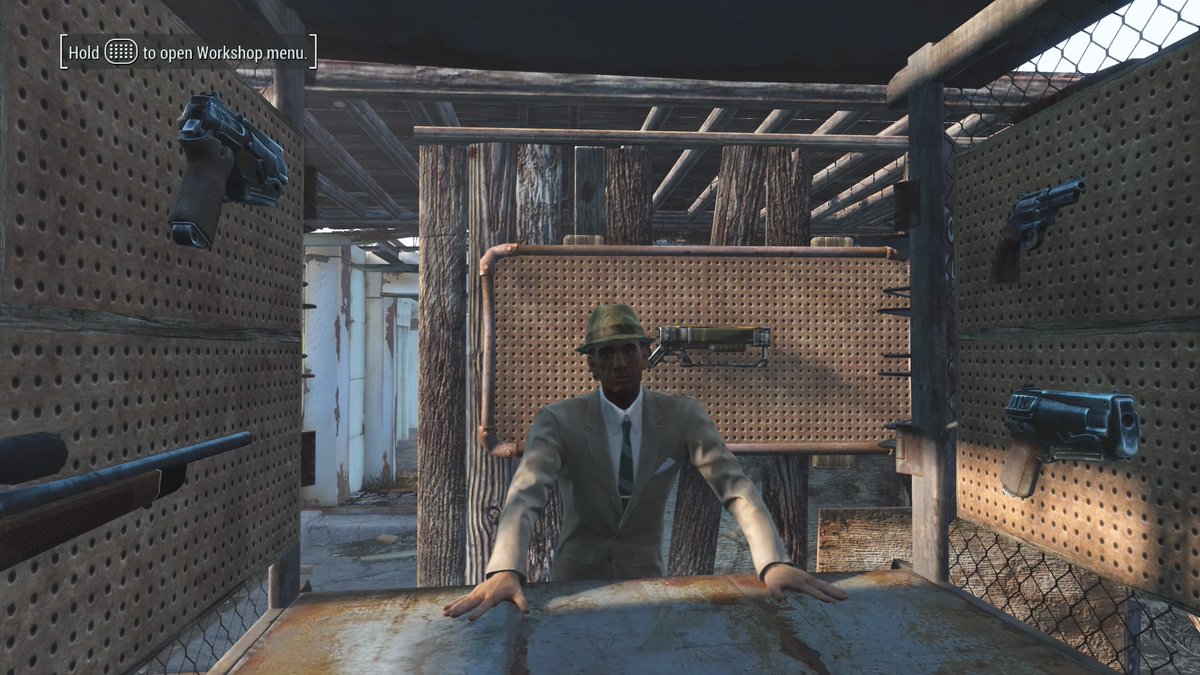 Fortunately, the machines aren’t the only part of the Contraption Workshop. The DLC also adds a number of traditional settlement items, some of which are very welcome additions, indeed. As a person who enjoys the settlement aspect of Fallout 4, who finds some kind of weird therapeutic payoff in building quaint, functional little communities for my virtual citizens, this was the part of the DLC that appealed to me the most.

The DLC introduces official gun racks and mannequins to display your weapons and armor sets (display racks like these are always one of the first mods in any Bethesda game so it’s nice to see them catch up to the demand). While a little clumsy (gun racks, no matter how large, can only display a single weapon at a time), they’re functional enough to spruce up any Wasteland hovel or gunstore. The mannequins really add the serial killer je ne sais quoi I thought my Red Rocket station was missing.

Bethesda has also attempted to address some of the wiring woes settlement builders have complained about, adding a whole new class of conduits and conductors to make wiring large buildings easier. This includes a godsend in the form of a “through the wall” connector – no more sloppy wires ran through windows and gaps in a mishmash tangle. Is it weird that single part might be the thing I enjoyed the most from this DLC?

There are two whole new classes of buildings to make: warehouses and scaffolding. The warehouse set is great not just for a more industrial look, but also a surprisingly agrarian touch. The numerous windowed walls and angled ceiling pieces are perfect for making your very own Wasteland greenhouse. I spent an embarrassing amount of time lovingly festooning mine with garden plots, tomato plants, and decorative clutter. Fertilizer bags neatly stacked in the corner, a shovel painstakingly leaned against the wall. Maybe I should plant a garden this year and get it out of my system. 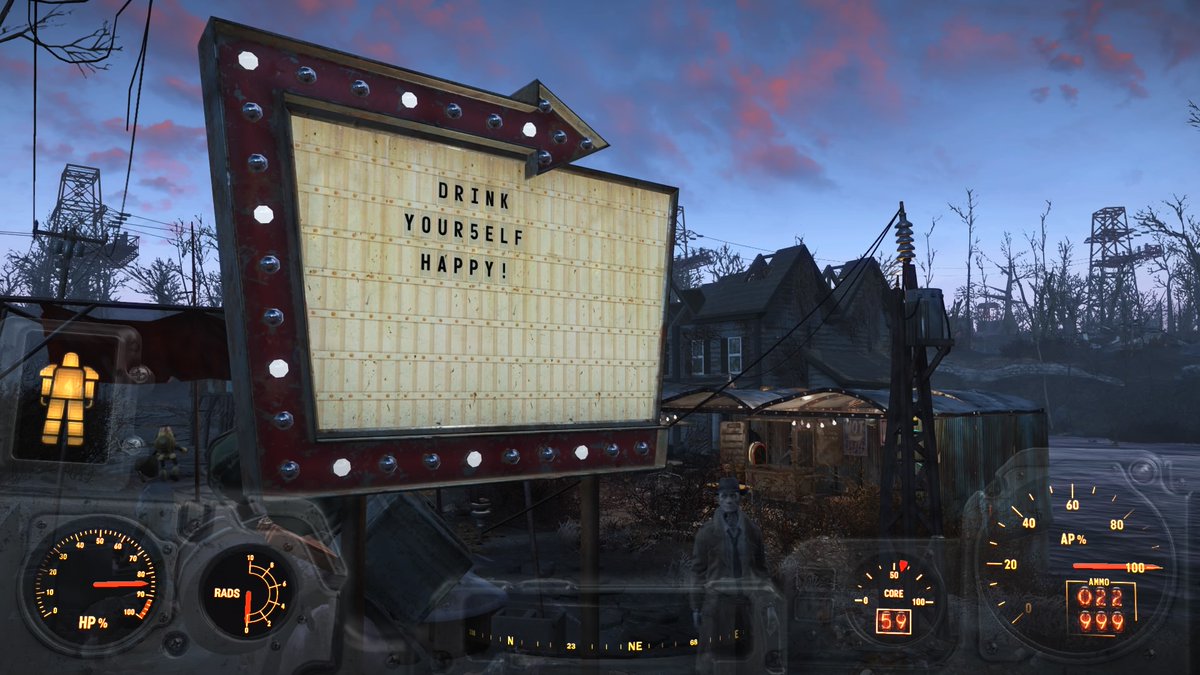 Then there are all the other small pieces and gubbins: illuminated movie posters, some new baubles, marquee displays with blinking lights, and acrylic signs (which are a huge pain in the ass to setup). Much like the Wasteland Workshop, if you’re deep, deep into the settlement building aspect of the game, you’ll appreciate the added options, but that’s it.

This is filler, pure and simple. This is contractual obligation padding out a Season Pass. It isn’t terrible, it isn’t offensive, but it isn’t much fun either. The greatest value of this DLC won’t come from actually playing it, but in watching some YouTube physics wizard design the perfect Brahmin slaughter house, or a machine that automatically launches bowling balls at a captive Raider. This is DLC designed to manufacture ten-second .webm files. If you’re not absolutely crazy about the settlement building aspect of the game (or trying to build an online empire of clickable content), this is a hard pass.