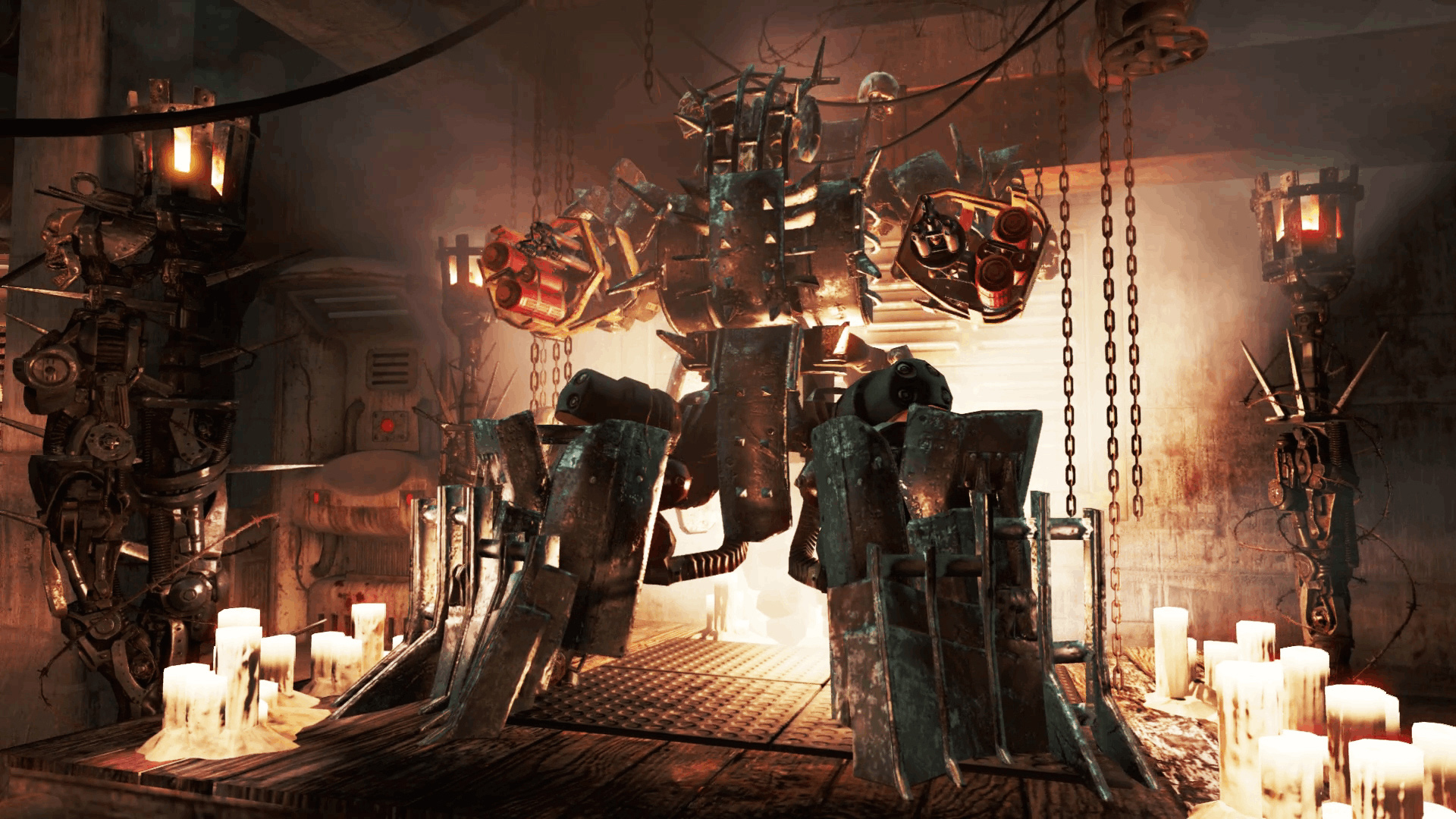 I played a lot of Fallout 4 last year. Too much, too quickly, in retrospect.

It was one of those games I loved in the moment, but whenever I stopped to think about the bigger picture, I couldn’t get away from the nagging feeling that it wasn’t the step up that it could have and probably should have been. It was just so similar. So… safe. Then I kept playing anyway.

The first paid DLC, Automatron, attempts to inject new life into Fallout 4 with a short series of quests and a bunch of robots. Crazy, murderous, human-skull-wearing robots. You can even build your own, assuming you’ve stocked up on wasteland scraps and have the right character build. 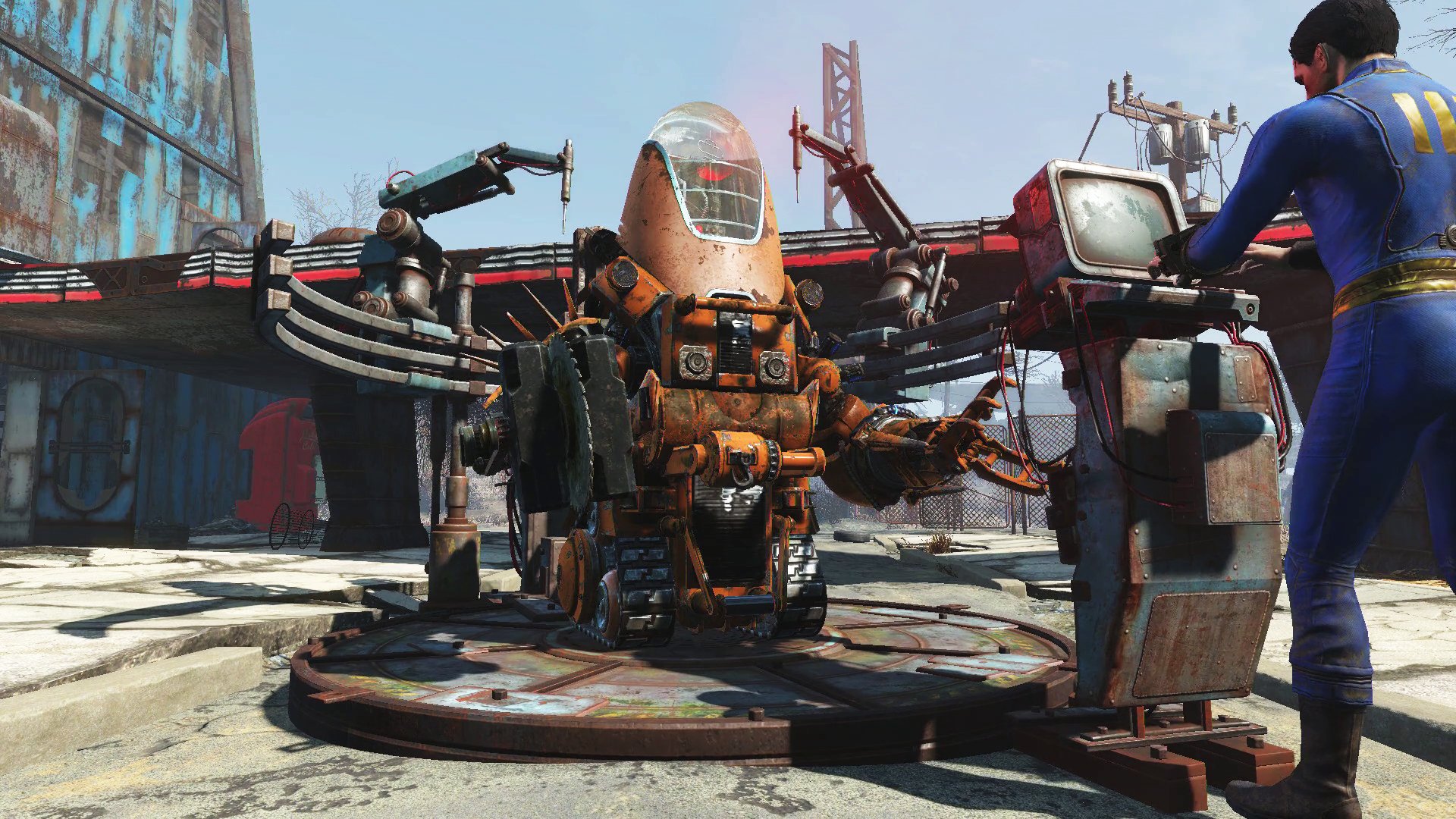 Automatron begins the usual way. Your Pip-Boy picks up a mysterious radio signal carrying a cry for help, a corresponding location appears on the map, and you go investigate. Arriving at the scene, there’s already a robot battle underway and when the dust settles, only one machine, a friendly Assaultron, is left standing. Her name is Ada. She needs help avenging her fallen caravan.

From there, the two of you are off to track down the true perpetrator, The Mechanist, whose army of Robobrains can’t seem to stop killing the good and not-so-good citizens of the Commonwealth. It isn’t long before you come across folks in the latter category — a clan of violent but crafty raiders with makeshift monstrosities — while searching for the upgrades Ada needs to exact revenge.

There are a few quests in total spanning two major indoor environments. Compared to what’s in the base game, the story felt middle-of-the-road. It’s intriguing enough to warrant going through, with interesting lore if you’re on the lookout and okay-to-lackluster characterization, but it’s by no means mandatory. Above all, I appreciated the opportunity to fight less-familiar enemies for a change. It took around two and a half hours to complete the questline with my level 47 character. I wasn’t in a hurry.

Most notably, Automatron introduces the Robot Workbench (unlocked through story progression), which lets you modify characters like Codsworth, Curie, and Ada, or start from scratch. You’re able to tweak individual body parts to your liking and pick the weapon(s), paint job, and voice module. I was pleasantly surprised by the amount and variety of options available. It’s possible to make bizarre-looking instruments of death, or go in a completely menacing direction, and that’s great.

But before you can build, you’ll need to stock up on crafting materials and, in many cases, specific perks are also required. As someone who didn’t spec their character toward skills like modding, I’m a bit out of luck. I can’t construct my ideal droid companion unless I go grind for fallen parts or earn a ton of experience which, at this point, I’m unlikely to do. It’s a shame this stuff didn’t make it into the game sooner. Digging through all those buildings for junk would’ve felt more meaningful.

Besides the story and the build-a-bot functionality, the DLC also includes several extra weapons. One is a robot’s head that you have to manually charge before firing (neat!), while another, the Tesla Rifle, jolts enemies with a satisfying shock. I had some fun with the Mr. Handy buzzsaw, too.

Going in with modest expectations despite that price point, this is a decent DLC release. The main draw, the robot-building feature, is cooler and more extensive than expected. I wouldn’t get Automatron for its story alone, though. And I’d also hesitate to recommend it if you’ve already had your fill of adventures across the Commonwealth. You’re better off waiting for Far Harbor and its new setting.