If there is one complaint of the current generation of gaming I wholeheartedly agree with, it’s the sheer number of “HD” remakes being shoved out because native backwards compatibility is absent on the PlayStation 4 and Xbox One. While Microsoft has gone out of its way to update its system to support last-generation games, there doesn’t seem to be a similar solution for Sony fans. Instead, publishers will be more than happy to continue shoveling out remakes.

Now, most of these re-releases are for games that are four to five years old. Fairy Fencer F: Advent Dark Force is coming out less than two years after its PS3 debut. That tiny turnaround didn’t lead to a game that looks any better than its last-gen release, but depending on your view of the original game, Compile Heart might have managed to greatly improve every other facet. 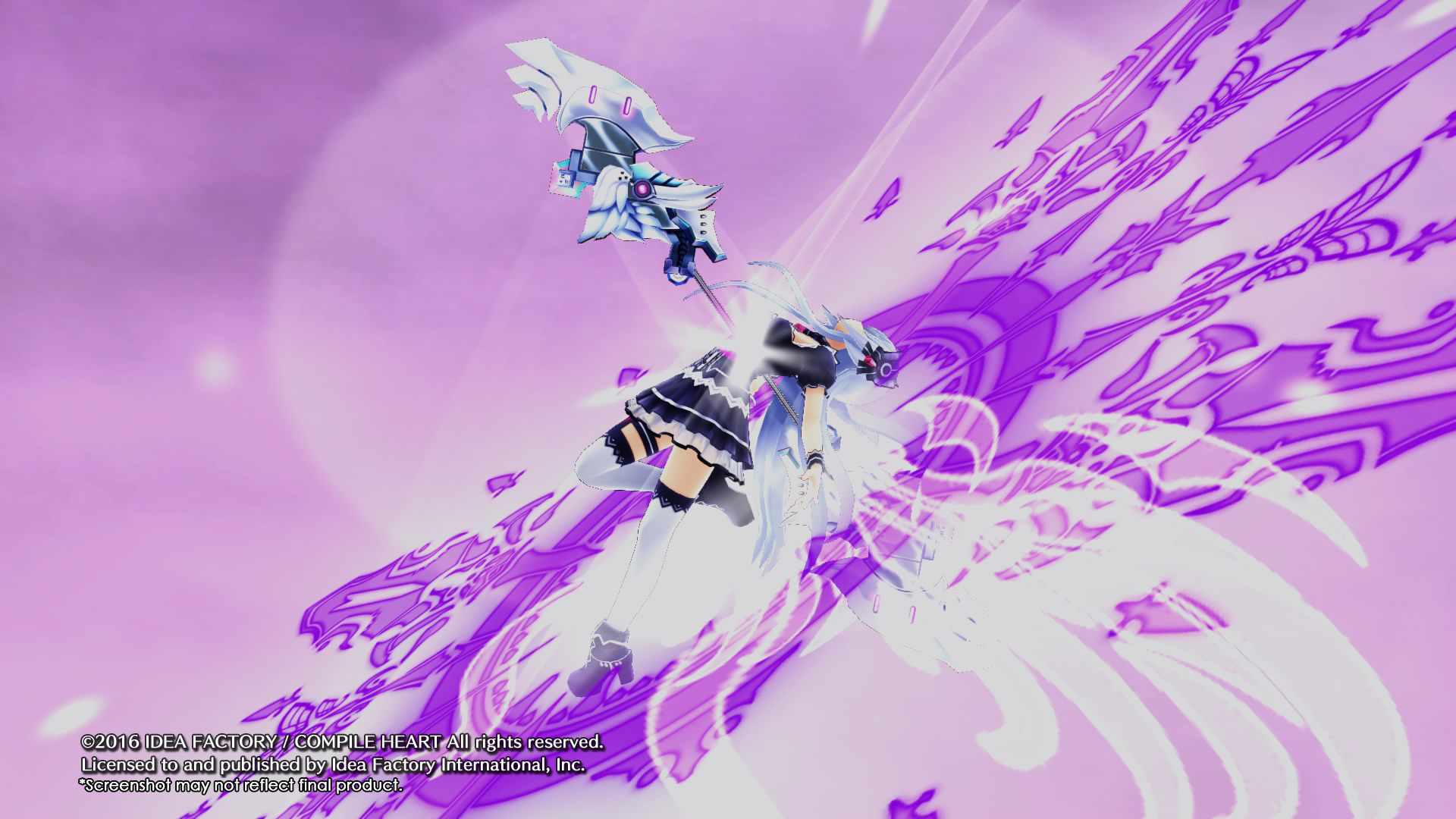 If you plan on picking up this game, the first thing you must do is adjust the audio settings. As has been my experience with other Compile Heart games, the default settings will cause you to miss out on most of the dialog due it being so low and the repetitive music and sound effects being blazingly loud. With that out of the way —

Fairy Fencer F: Advent Dark Force casts you in the role of Fang, who comes across a sword he believes will grant him a wish. He’s wrong. When Fang pulls the sword out of the ground, he is greeted by Eryn, a fairy, who informs him he is a fencer and pushes him into a grand adventure to collect the furies needed to revive the Goddess and bring peace to the land. Along the way, you meet new party members, fight against impossible odds, yadda-yadda-yadda. It’s a JRPG and it doesn’t really try to reinvent the wheel.

In Destructoid’s review of the original game, Ms. Vincent wrote at length about her distaste for Fang and Eryn. Looking over what she said, I agree with her to a certain extent. Fang isn’t the most engaging character, Eryn is a bit of an overbearance, and together they’re like an annoying anime version of Ray and Debra Barone. The rest of the cast fills the standard Compile Heart tropes, from the haughty princess Tiara to the hypersexual Harley.

Fans of the developer should already be used to repetition and it’s no different here. Early on, the gameplay gets into a cycle of entering a dungeon, collecting a fury, and releasing a piece of the goddess. The story here follows the same repetitive pattern with conversations about food, nagging about waking up early, arguing about Fang’s reluctance to progress, etc. Dungeon aesthetics are recycled and throughout the 30ish-hour journey, you’ll be visiting the same dungeons time and time again.

Helping break up the monotony of the dungeons are the furies you collect. Instead of just going to your next dungeon by selecting it from the map, you have to use a fury to unlock it. Depending on the fury you select, the dungeon will play slightly different. Some will make physical attacks strong but weaken magic attacks, others will keep you from using skills while giving you extra XP. It’s a great little system that can help with grinding for XP, WP (the points you use to unlock new moves/spells), or cash, depending on the fury you use. 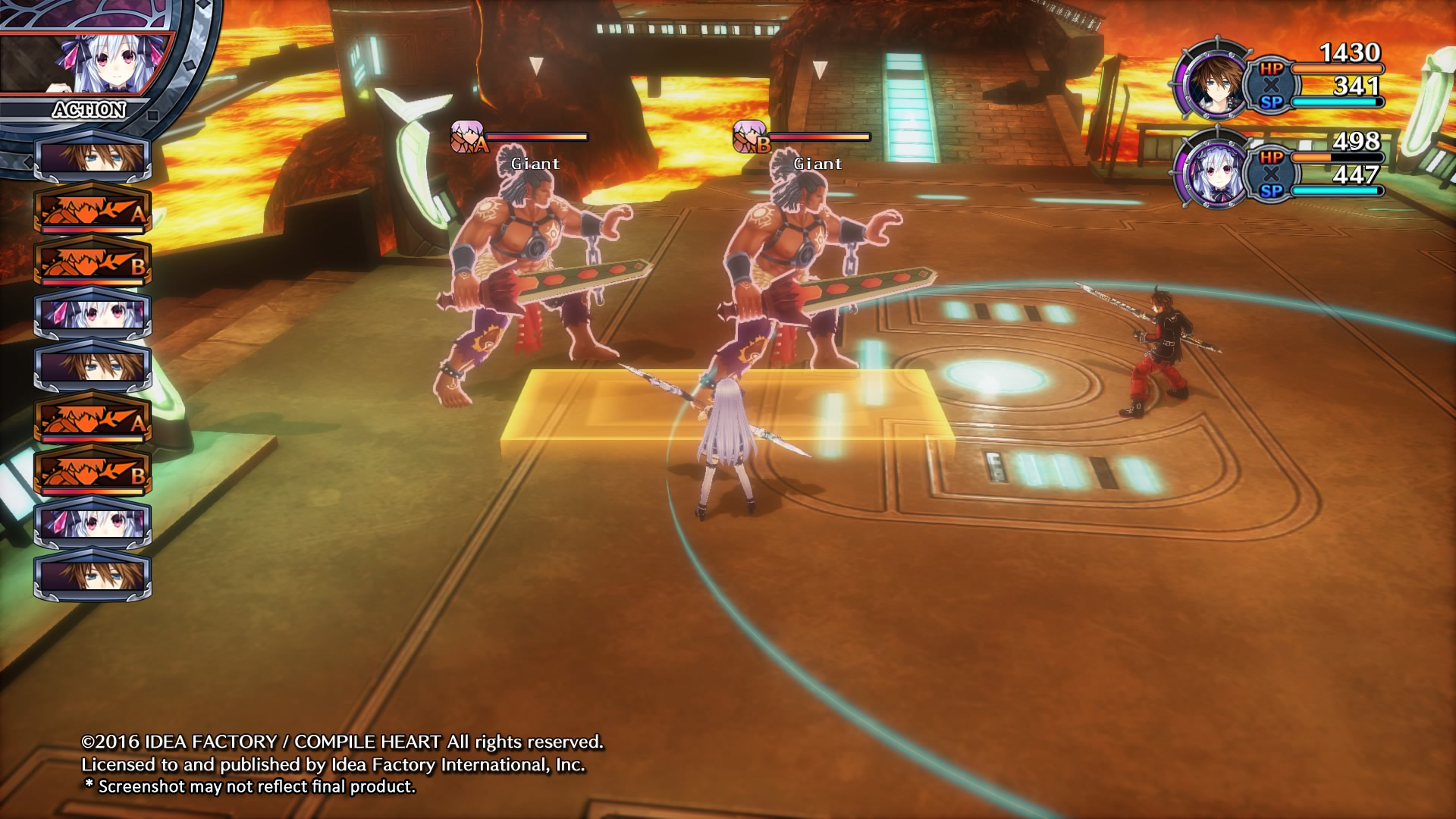 The combat is probably the best of any Compile Heart game I’ve played. If you have experience with the original (or have played any of the mainline Neptunia games), you know how the turn-based combat here plays. It’s fast and fun. In fact, I had a better time with it than I did with Megadimension Neptunia VII. Characters are able to move around on the battlefield at a much greater distance than that game, evening the playing field between my team and the enemies who always seemed to have no limit to how far they could move. Plus, the “Fairize” ability that powers up your players while giving them a new Super Saiyan look is pretty awesome.

Even as the enemies became more difficult and my party members started missing more than Stephen Curry in the NBA Finals, the combat never ceased to entertain me. There is a lot to consider when attacking in these visually spectacular battles. Moving behind an enemy will do the most damage, but if you bunch all of your characters behind the same creature, you leave yourself open for group attack that can do massive damage.

It’s not perfect and it can get pretty cheap. Enemies spammed the same attack on a single member of my team for most of my journey, and more often than not the character being pummeled was my healer, Tiara. It’s easy to deal with early on, but as the game progressed and enemies began to soak up damage like a sponge, I found myself in fights that would go on for far too long. While I’m on the subject of battles, can we please stop with the scripted ones? There are like six in this game where you attack for a while doing no damage, only to trigger a cutscene where it’s explained you now somehow have the power to defeat the enemy, starting the battle over again. 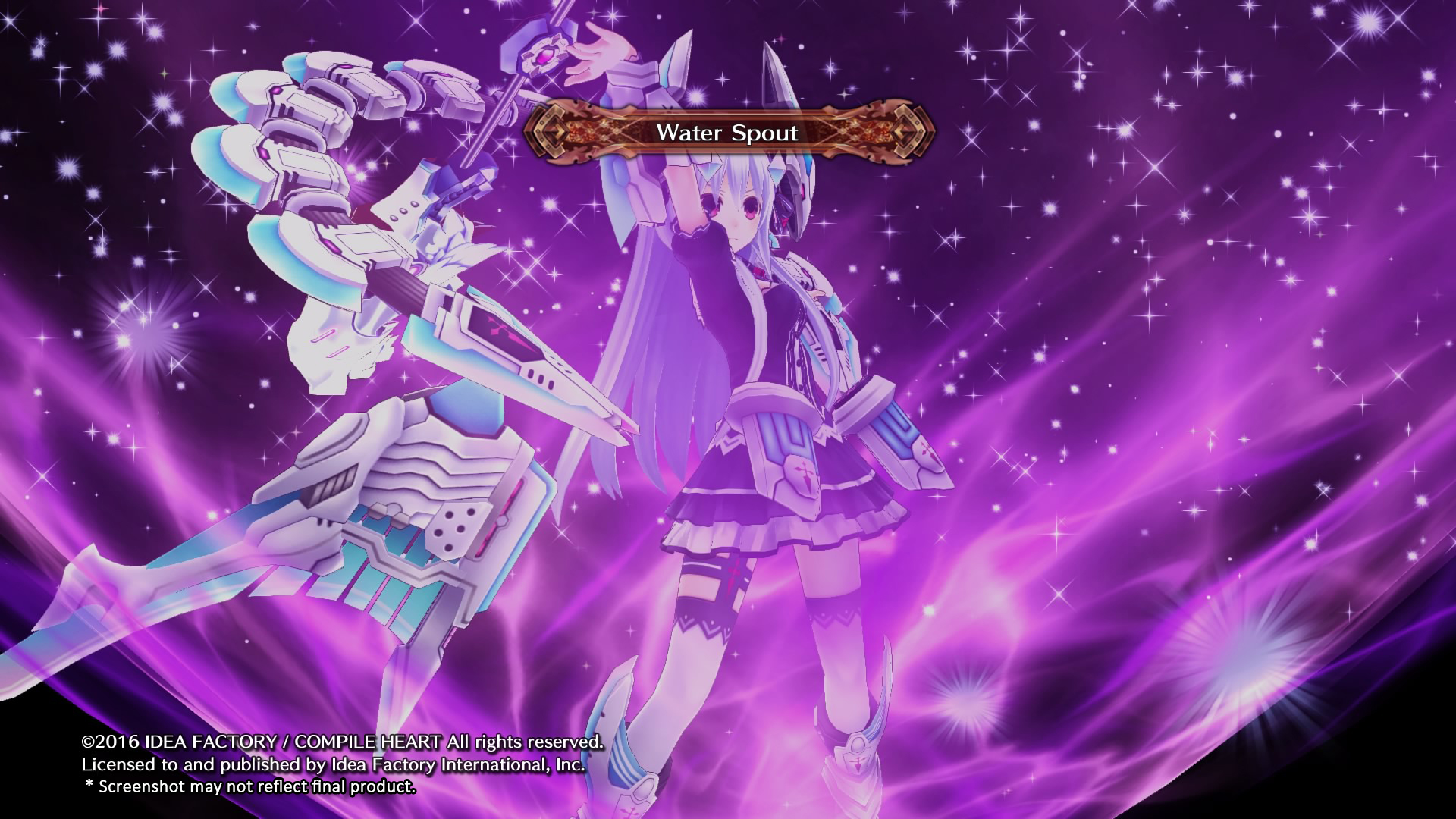 For people who have played the original game and are wondering if they should double-dip (and are not one of the Compile Heart fans who will just buy anything the company makes), let’s go over what is new in this remake. In combat, the biggest change is you can now have up to six party members fighting at once, all at a steady frame rate. For the campaign, there are new party members to recruit and NPCs to chat with, as well as a new story path you can take for the Evil Goddess.

I didn’t play the original release, so I didn’t know what to expect from the diverging storylines. Without giving too much away, there is a certain critical event where everything resets and, depending on which deity you’ve been pulling swords out of, the plot can branch off into a new and curious territory. It can also just repeat itself, which is what it did for me as I set off down the Goddess route. Though some of the character personalities changed and my possible partners were different from before the event, everything else about this path was nearly identical to the prior 15 hours, including the order of most of the dungeons.

When I started up a new save file and set myself on a different path, the experience was much more bearable. Yes, I was still playing the same dungeons and fighting the same enemies, but the character motivation had shifted, morphing the storyline into something far more interesting. Had I not decided to go back, I wouldn’t have liked this game. That is a problem. 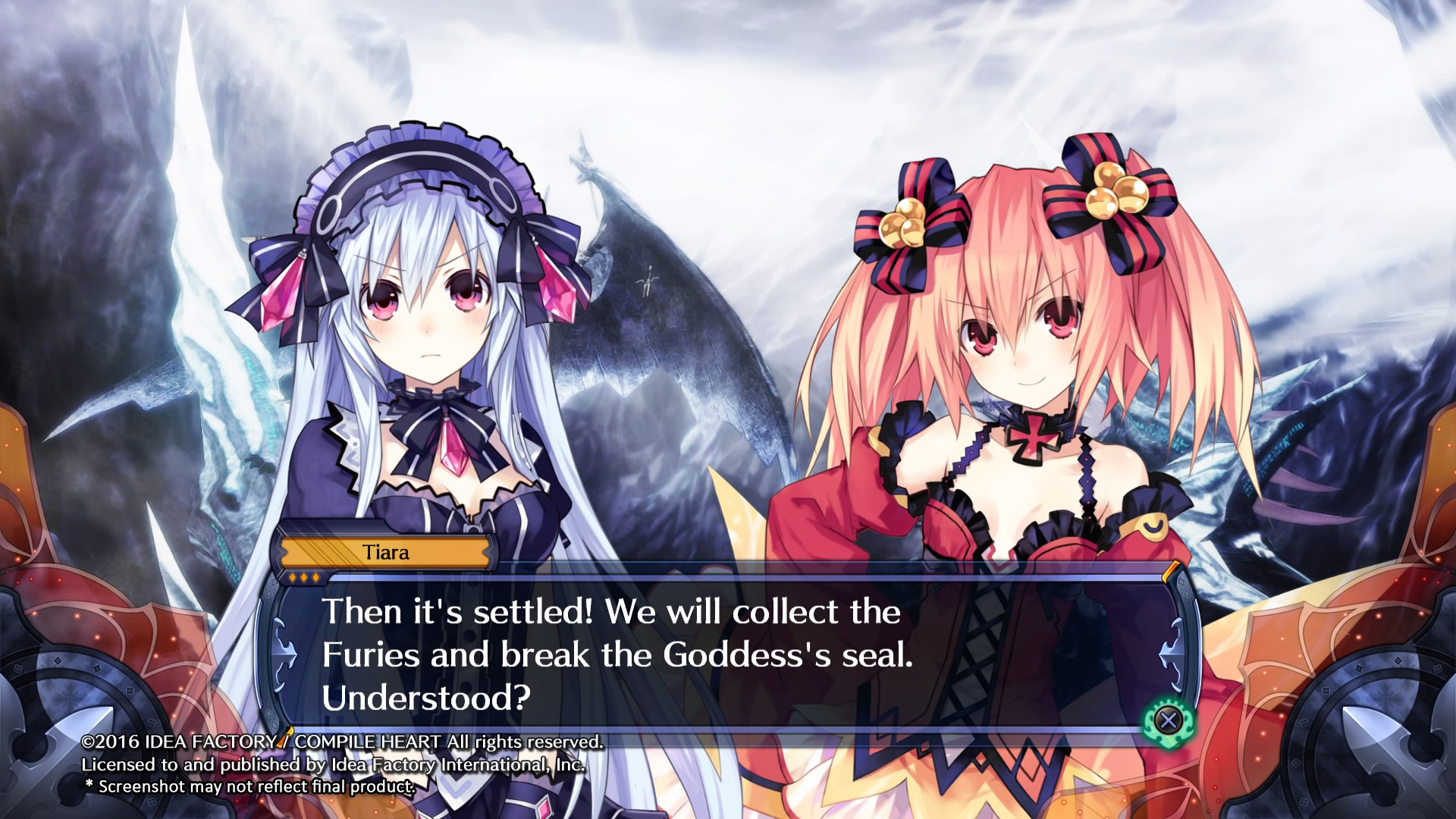 The main plotline, the one most people are going to experience if they just do what they’re told, shouldn’t be so much worse than the alternate paths you can take. There is zero warning about how a player’s God or Goddess revival strategy will affect the plot, meaning it can take up to 60 hours to experience something resembling a meaningful storyline. The levity of the script doesn’t exactly help the situation. The critical event I mentioned above? I felt nothing when it happened because, by the time I reached that point in the story, none of the characters had given me a reason to bond with them, outside of Galdo with his stupidly funny stereotypical Canadian accent.

Perhaps the pacing has something to do with that. The story is as quick as the combat and layered with frivolity, so much so when the few dramatic scenes did appear, they didn’t hit as hard as they could have had the game taken itself and the situation a smidge more seriously. Most of the conversations quickly devolved into childish pablum, which I would be fine with had I only planned to play the game once. 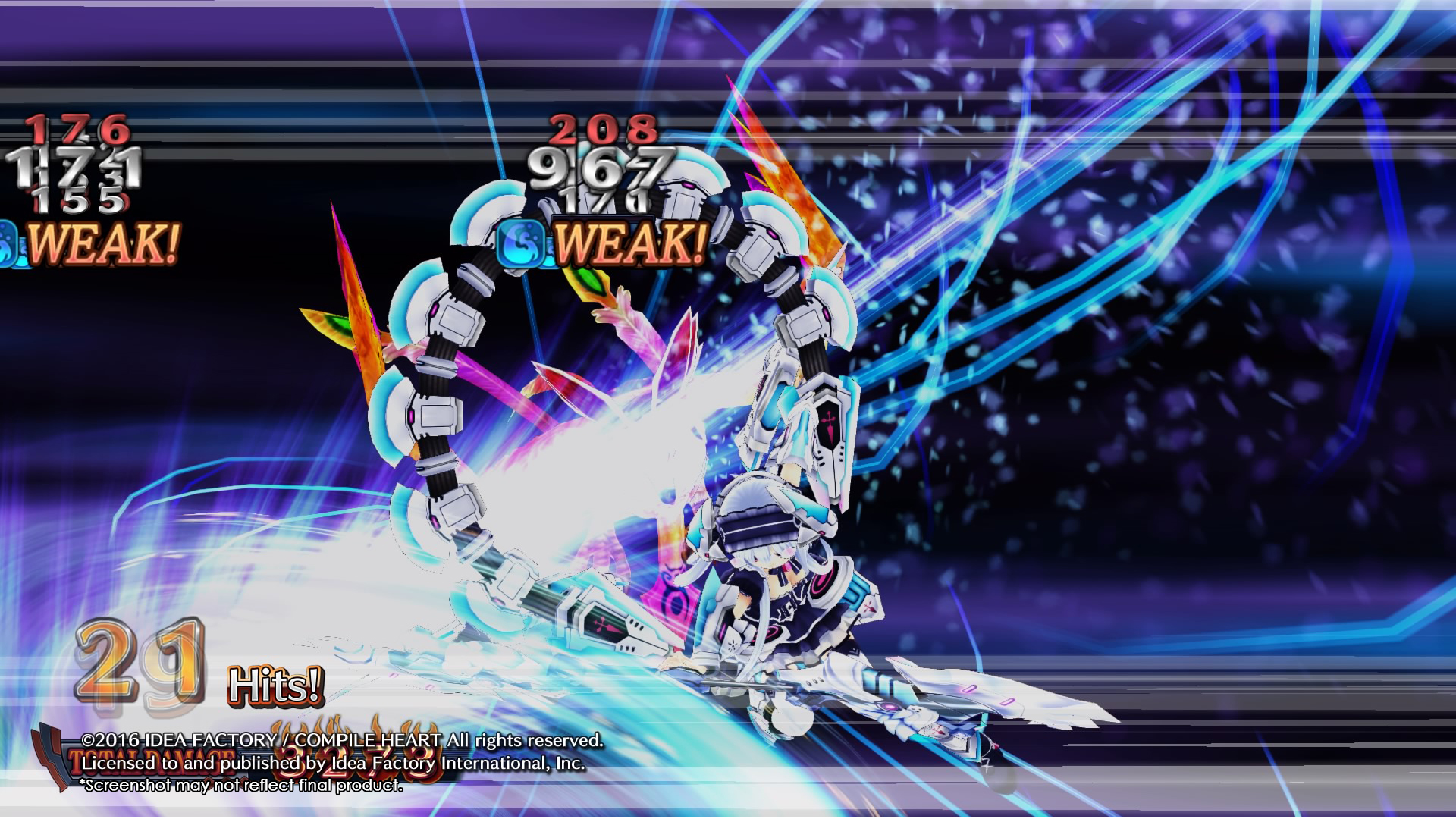 But I guess that’s the rub of doing a review. If I stopped after my first playthrough, I wouldn’t be recommending it. With two under my belt, I recognize I could have had a great time with Fairy Fencer F: Advent Dark Force had I just done the opposite of what all the characters told me to do. It’s quite the Jekyll and Hyde situation, one I can easily recommend to Compile Heart fans, but only endorse for non-fans on the stipulation they don’t listen to Tiara and Eryn.