When Euro Truck Simulator 2 was first brought to my attention, I’ll admit I thought the attraction had to be based in irony. To wake up one morning and find the gaming community is going crazy over a trucking sim is unusual enough to make one suspect some sort of joke.

As I played the game for the first time, I laughed. Here I was, driving a truck from London to Sheffield, trailer full of ice cream, and it was hilarious. In my ignorant, patronizing way, I was crudely mocking myself and the idea of simulators as I tootled along the motorway, giggling like an uneducated clown.

A week later, and I have loans to repay, trucks to paint, and goddamn me if these peas don’t get to Calais in time. There’s no irony anymore. Euro Truck Simulator 2 is too serious for such tomfoolery! 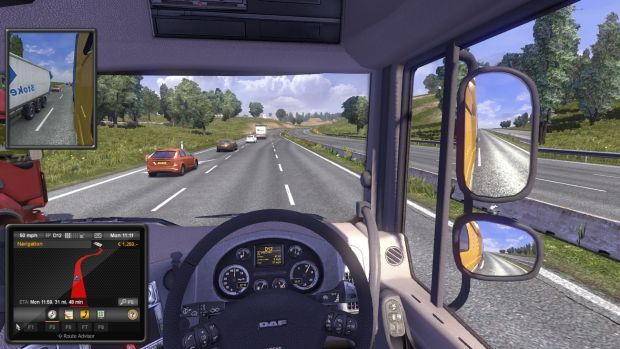 Euro Truck Simulator 2 is all about living the dream that is professional trucking. The game even tells you as you begin that this is your dream job — and who are you to argue? Armed with little more than enthusiasm, players begin their adventure humbly — with a decrepit little garage in the home city of their choice, and a company with no trucks to its name.

The player begins by taking jobs for other companies, earning money with fuss-free escorts from one city to another, with an eye toward earning enough cash and purchasing a truck. An owned truck means more freedom, with higher-paying jobs that require more responsibility. When working directly for the player company, cargo is waiting at a select shipping yard and must be hitched to the truck before it can be taken to its ultimate destination. The next step from there is to start upgrading the garage, hiring other drivers to bring in more income, and eventually building a trucking empire that spans all of Europe.

The deeper you go, the more there is to do. Want to expand quickly? You can take out loans that need to be repaid. Want specialized drivers? They each level up the same way you do, and you can dictate the way they do. Of course, you also have to be mindful of expenses, be they repayments to the bank or fuel consumption by employees looking for work. There are a lot of ducks to get in a row, but the interface is user-friendly and information is constantly provided so nothing ever feels insurmountable.

More than simply a game about driving, Euro Truck Sim 2 boasts some roleplaying elements to keep things interesting. Successful jobs earn experience, which leads to skill points. Skill points can be spent upgrading one’s proficiency in certain types of jobs, unlocking new types of cargo, or even investing in fuel efficiency. Improving personal abilities and building a business from one lone driver to an entire fleet is just as important as getting from A to B, and maintains a compelling grip on the experience.

That said, driving trucks in as realistic a fashion as possible is the bread and butter of any trucking sim, and Euro Truck will have fans covered. Offering a huge map spanning the length and breadth of Europe, there’s plenty of time to be spent on the open road, and lots of distance to cover. Although you won’t be undertaking journeys in real-time, a decent paying job is still quite the investment. I often found myself able to only play one job at a time, rather than stay glued to the screen all night long. As outwardly mundane as the experience may appear, it’s a time sink that can prove a mental drain, and is best played with breaks in between. 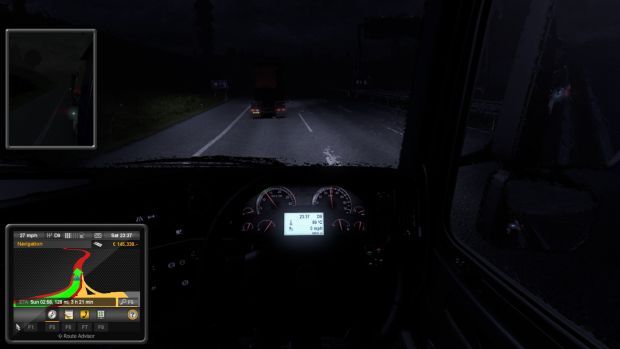 There are a variety of controls and settings allowing for significant flexibility in terms of personal comfort. You can choose how complex your controls are, with automatic settings for those rocking the trusty keyboard, and more involved ones for those wanting to go the whole hog and set up a wheel. Whatever your available input, Euro Truck does a great job of covering you and ensuring you get into the game easily enough.

Accessibility is, in fact, one of its strongest suites. A solid tutorial guides newcomers, and the essential GPS is easy to understand, as is its clear and simple route map. My first job was an absolute disaster, with me getting the trailer stuck a number of times, managing to tip the vehicle over, and even getting so boxed in I had to call for emergency rescue. After my embarrassing first run, however, I quickly found myself getting the hang of things, and was soon bold enough to trek across whole countries in my quest for freight and fortune. 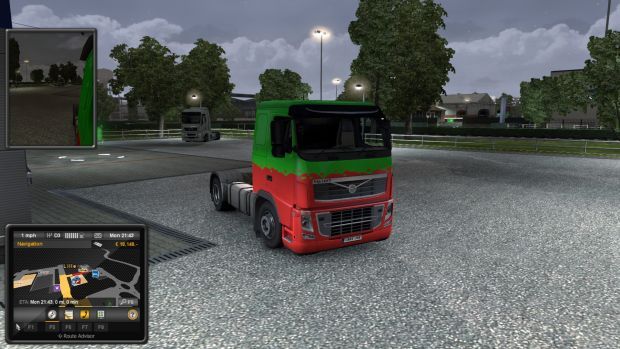 A lot of Euro Truck‘s experience is, expectedly, rooted in routine, but complacency manages to be quite a dastardly foe. Traffic lights, speed cameras, and the ever-present need to keep one’s eyes on the road can always trip up an overconfident player, and as relaxing as long country drives may be, the pressure to avoid mistakes is present throughout. It’s very easy to start getting too cocksure, speeding along a motorway without regard to other drivers and strict speed limits. Every mistake translates into a financial penalty, damaged cargo reduces the payday, and dings suffered by an owned truck will have to be paid for at service stations.

When a mistake occurs, it’s almost always the player’s fault, but there are some moments where the computer-controlled road users compound an issue. Seemingly programmed to only ever drive forward, other vehicles have a nasty habit of doing nothing to avoid their part in a collision, and if you’re ever trying to steer your way out of a tight spot, you’ll get no help from other cars, willing as they are to close any gap in the road, no matter how minute, even if you were backing up to create the space they just filled. Should you manage to hit them, drivers have a nasty habit of refusing to move thereafter, sometimes causing you to suffer a second collision fine for smacking them again as you drive through them. 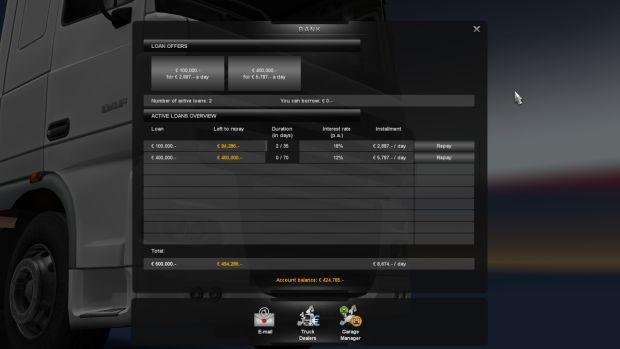 These frustrations inevitably pop up, but they’re few and far between, and experienced drivers will be able to avoid many of the pitfalls that lead to such trouble. Despite the occasional irritation and the pressure to perform jobs well, Euro Truck Sim is still a largely cathartic experience. There’s a therapy to be had in driving through a variety of countries, a sense of joy as you get closer to your destination, and a sense of accomplishment in performing such mundane tasks as refueling at gas stations and finding parking stops at which to grab some sleep. As you build your business up from nothing and take on more of managerial duties, it’s hard not to feel pride over rewards well earned.

Although not the most visually advanced game, Euro Truck‘s believable presentation of Europe’s roads and cities are nonetheless impressive. From the shape of the traffic lights to the atmosphere of the backdrops, there’s a sense of individuality to each new territory you uncover, and the trucks themselves are lovingly recreated with an intricate level of detail. Owned trucks can be repainted and upgraded with all manner of parts, and as the player levels up, the potential for personalization expands. 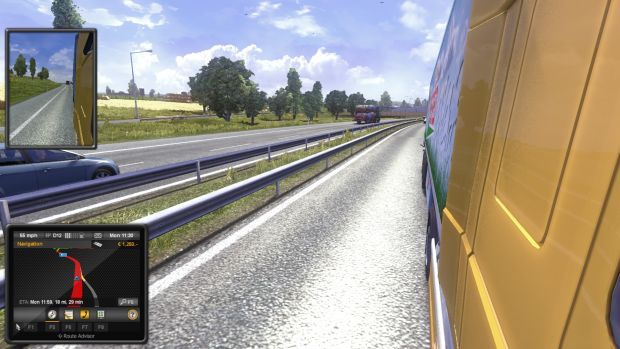 Perhaps the most fun aspect of Euro Truck Sim 2, however, comes in the form of its music. With the simple tap of the “R” key, you can open up a menu packed with European Internet radio streams providing a wide variety of tunes. Whether you want some top forty hits or obscure French ’80s tunes, you’ll be able to find something worth digging. Being able to complete my deliveries with some Peter Gabriel’s blasting through the speakers bumps up the enjoyment tenfold. There’s also the option to queue up music from one’s own PC, for those who don’t wish to leave their aural stimulation to chance.

Euro Truck Simulator 2‘s following is well earned. It’s not just a tongue-in-cheek dalliance, but an understandable dedication won by a game genuinely terrific at what it does. Being a simulator, there are inevitable parts of it that feel slow, and sometimes progression can be a bit of a drag, but it nevertheless manages to be an approachable sim with a smart implementation of more familiar “game-like” elements. A far cry from some of the more technical and unforgiving sims on the market, Euro Truck is as welcoming as it is authentic, forgiving while still prepared to reprimand those who fail. It’s one of the best jumping points anybody curious about sims could have, and for everybody else, it’s still just a damn fine experience in its own right.

It may sound like a joke that so many people are piling glowing praise on a trucking sim, but Euro Truck Simulator 2 is the real deal.