Shoot-em-up enthusiasts hold an odd position in 2012. The best of the genre is behind us, immortalized in the coin-op perfection of Eighting, Toaplan, and Seibu Kaihatsu games, and CAVE is always there to supply us with one gem per 2-3 years. It’s easy to be spoiled. There are even those who downplay Pixel Junk SideScroller and Sine Mora, calling them style over substance (true, but the substance is still in bulk.)

Ether Vapor is a nice reminder of just how far south the genre can go at times. It’s not the incompetent mess of Otomedius Excellent, but it’s a stunning display of what not to do in the genre. One thing that can’t be said is that the game doesn’t have ambition. Few shoot-em-ups change perspective and style as often as Ether Vapor does, but perhaps there is a good reason for that.

There are a lot of Doujin (read: Japanese indie games) shooters out on the Internet. I avoid almost all, because it’s hard to parse which ones are worth my time. Every now and then, one game receives so much buzz that I need to check it out. I wasn’t disappointed with games like Crimzon Clover and Trouble Witches, but others let me down in the past. Despite hearing about Ether Vapor, I decided to pass.

Ether Vapor is very pretty for a doujin game and the new coat of paint that this re-release brings only highlights its production values. When I praise this, know that I am praising it in the context of being a doujin game. It doesn’t hold a candle to games like Deathsmiles or Sine Mora in terms of visuals, but Ether Vapor has its own charms, as it captures the look of bright, colorful PS2/Dreamcast shooters. 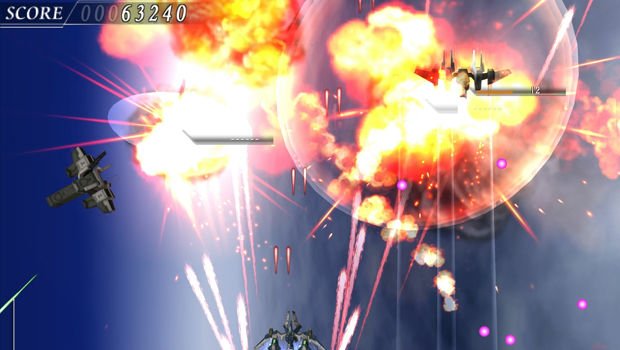 If the attention on visuals seems odd for this review, it’s because aesthetics are so much of Ether Vapor’s focus. Ether Vapor is a very flashy game, but at the cost of playability. It makes many crucial mistakes not uncommon for a debut effort by a doujin developer. Namely, the bullets and enemies often blend too easily with the background. Everything in the game feels designed with aesthetics in mind first and gameplay second. Missiles take the form of neon streaks across the screen, which become very confusing when you are bombarded with them, later in the game.

There is rarely a section in Ether Vapor where I felt I could immediately recognize everything happening on screen. In a genre where all info needs to be perfectly communicated and the player requires flawless control, these blemishes are unacceptable and sour the entire experience. This visuals-first philosophy intrudes other larger design aspects as well. Sure, some boss entrances are bombastic and neat but only at the cost of player frustration. I’m all for pattern recognition in shooters, but too often these encounters seem dictated by completely random behavior.

Another major problem comes from enemy positioning. Ether Vapor loves to play with perspective (more on that to follow). One way it does this is with enemies flying in from below, either staying in the distance or moving closer to the player. When they are distant, the player can only damage them with lock-on missiles — a considerably weaker attack from the spread and gatling weapons. 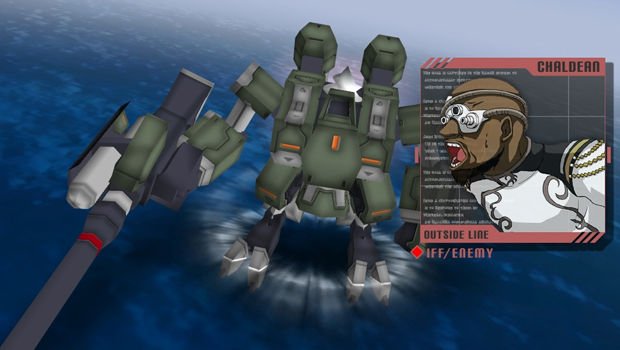 It’s near impossible to make out whether an enemy is on the same plane as you or not, so you’ll need to waste time firing your gatling weapon on them to find out. Even worse is when you crash into enemies, assuming they were below you. In addition to this, there are obstacle courses later in the game that suffer from the same problems with perspective. It all looks cool, but these things make Ether Vapor a very frustrating game to play.

The most interesting thing about Ether Vapor is its constantly shifting perspective in combat. The game changes between a variety of styles: vertical, horizontal, a Star Fox 64-esque behind-the-ship view, and an Einhander-esque three-quarters view. Beyond this, there are a handful of Rez-like sections where you move a cursor over incoming missiles and explode them with your own. These sections are really dull, since they offer no challenge at all. They make replays a real drag, nullifying any initial “wow”-factor they held.

Beyond these visual gimmicks, there isn’t anything else all that interesting going on with Ether Vapor’s mechanics. Your ship has three methods of attack — gatling, lock-on, and spread — that each have their own charge shot. The spread summons a defensive bubble that absorb bullets which comes to be very useful later in the game. The gatling charge is just a powerful laser, only used in rare instances for full effect. I can’t figure out what the lock-on charge does; it seems identical to regular lock-on, as far as I can tell. And that’s it. No power-ups. No additional weapons. 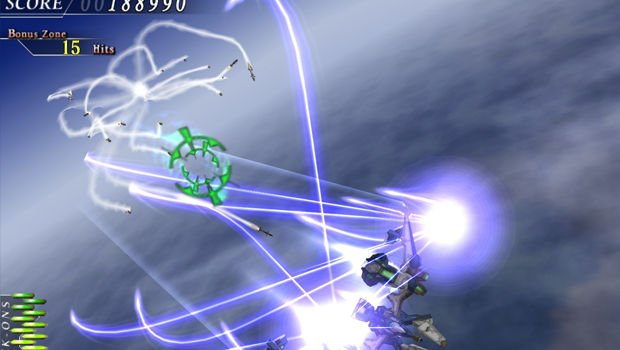 The story isn’t anything special. There are some interesting details to unravel, but the surrounding dialog is so bad that you soon won’t care very much. I actually laughed out loud at one moment where a friendly pilot earnestly comments on the main character mourning after defeating a teenage pilot: “You have a soft spot for children.” Yes, I cry after I OBLITERATE THEM IN SPACE! I’M A REAL SENSITIVE GUY!

I can see why Nyu Media decided to localize and release Ether Vapor for the West. It’s a very flashy, interesting shooter that doesn’t bare direct comparison to anything else out in the market. Unfortunately, that’s all it really has going for it since it’s such a frustrating and poorly designed shooter. It doesn’t help that the game is difficult, limiting health and continues until you unlock more through failed attempts. People love to say Sine Mora is style over substance, but the substance is still clearly there. In Ether Vapor’s case, it just isn’t and style can only go so far in this genre.