Putting the pieces back together

I don’t know why I thought that putting a world back together — conquering various floating landmasses and combining them through sheer force of will — would be easy. Eador: Masters of the Broken World‘s similarities to Heroes of Might and Magic, Age of Wonder, and Kings Bounty gave me confidence, and then the leisurely-paced campaign tutorial taught me how to play an entirely different game.

Twenty minutes into my conquest proper, and I was being brutalized by unrelenting foes and rioting orcs. A remake of a Russian strategy game with old-fashioned sensibilities, Eador takes no prisoners and has a much higher opinion of my ability than anyone who knows me would.

It is one of those PC games that will have you fighting with the interface, shouting at the screen, and wondering where the hell the day went. It can be rather wonderful at times, but it’s brought out the worst in me, turning me into a loud, angry man. Well, louder and angrier than usual. 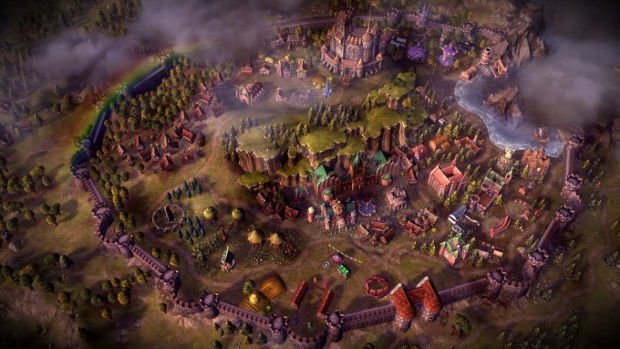 The world of Eador has been broken up into shards, gently bobbing pieces of land that somehow still hold life, and as an immortal being with an ambiguous past, it falls to players to take control of these floating chunks of rock and rebuild the world. It’s a tall order.

Each shard is distinct, coming in different sizes, containing a variety of fantastical threats, and providing bonuses to whomever manages to kick out the other lords and powers seeking dominance.

Every conquest begins with a map of all the nearest shards, detached and prime targets for beings of power, and the choice of which shard to attack depends on what advantages you want to get out of it. Do you want to unlock stables now? Or are you more interested in obtaining outposts, giving your provincial holdings more defense?

This goes a long way to making the fight for each shard seem like part of a greater mission. They aren’t standalone wars, and the victories and acquisitions hard won have an impact on the rest of the astral conflict. A long-term strategy is a necessity in Eador. 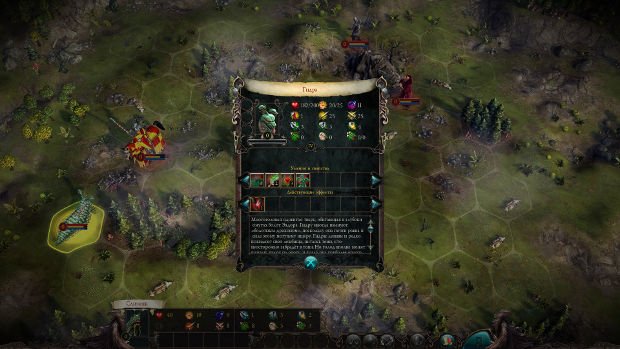 The most important location on a shard is the Stronghold. From there, heroes — the player’s main agents in the physical realm — can be recruited along with their armies, spells and equipment can be purchased and attached to a hero character, and a dizzying array of construction projects can be embarked upon.

Right from the get go, it’s imperative to decide on what units you want to eventually build, and what spells you want to be able to throw at dastardly opponents, as there’s a limit to the number of buildings one can construct. Choice and sacrifice permeates throughout the game, and it makes each conquest a more focused experience. Lamentably, the user interface is something of a mess. While greatly improved from the beta version, it remains fidgety and unintuitive.

Lose this Stronghold to the AI, or another player, and everything is lost, at least on that particular shard. Likewise, successfully besieging and taking over all the other Strongholds results in that shard being added to the player’s powerbase, magically merged with the other conquered landmasses.

Separating these stalwart castles is a vibrant landscape made up of provinces, and though they are only represented by one tile, they contain armies, towns, crypts, wizard towers, and all manner of typical fantasy locations. A province is brought under player control once its denizens are “dealt with,” and that can be done simply by defeating them in battle, but some races and groups are open to bribery, or they might even agree to join a player’s burgeoning kingdom if a quest is completed. 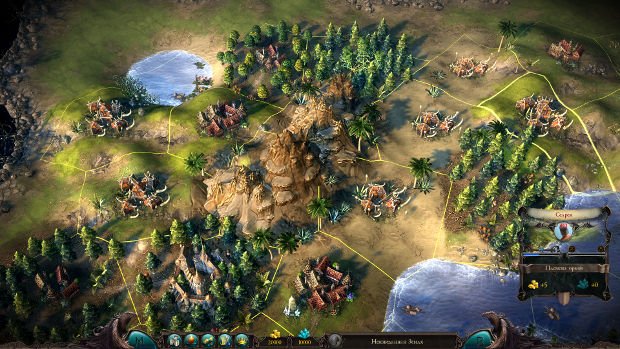 While the loot and experience that comes from battle makes approaching provinces aggressively tempting, sometimes — when you’re rich — it’s nice to be able to sidestep an easy scrap that won’t offer great rewards.

Provinces brought into the fold can be explored, which I found novel, yet at odds with how the AI acts. In my experience, the AI is almost always aggressively expansionist, and those who want to explore their provinces, getting into adventures or seeking treasures may find themselves lagging behind their opponents.

This risk does make exploration a bit more meaningful, as it’s a sacrifice, but as an aspect of the game that I really enjoyed, I naturally wished that I wasn’t shafted so often because of it. The conquest of the first shard teaches players that Eador is a marathon, but it really isn’t. It’s a sprint to see who can level up their hero or heroes the fastest.

In Eador, heroes are everything. Their stats, class, and way they’ve been leveled up dictates how many units they can command, how fast they can move across the map, how they and their army fares in battle, how good they are negotiations and bribery attempts, and how many, if any, spells they can employ.

Unlike other units, they cannot truly be destroyed unless the player chooses to not resurrect their corpse after death, but they can be taken out of play for a few turns, and that can be devastating. With no heroes, there’s no more conquest, exploration, and one’s ability to defend their holdings shrinks to a pitiful amount.

Though there are only four classes to choose from, after they gain enough experience they can specialize, becoming even more ridiculously powerful. While it’s expensive, more than one hero can be recruited, so there’re plenty of opportunities to experiment with builds and classes.

Battles play out on a field of hexes, covered in changing topography and obstacles. It’s traditional, but the plethora of unit types and the diverse abilities of the heroes makes most fights engaging. It could be a lot better explained, though, and I feel this really goes for all of Eador.

For the life of me, I couldn’t figure out the impact of stamina and morale on units. Every single one of them has these meters, along with their health, ammo, and various stats, but it took me a good long time to grasp their impact.

Likewise, the effect of different hexes, like hills or forests, isn’t well-explained, either. A pop-up mentions, for instance, that units in a forest hex get more defense against ranged attacks, but it’s not clear how much defense it will provide, and if your unit is safe or not. I’m not one to shy away from a bit of trial and error, but the hiding of important information seems rather unnecessary. 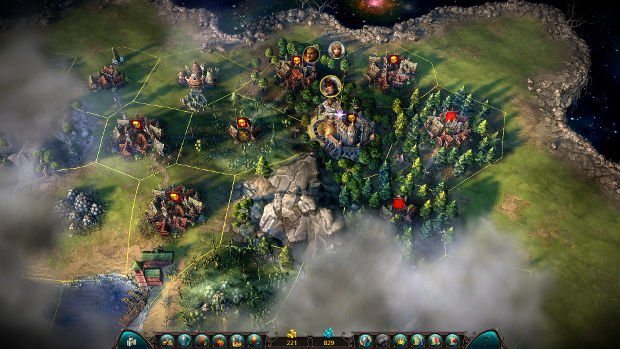 Counterattacks play a large role in the field of battle, and with this comes a few problems. Pretty much every unit can counterattack, though the attack’s effectiveness is determined by their actual counterattack skill. The problem usually arises when fighting a foe who is close to death. Hovering over an enemy will reveal if the attack will definitely kill them, or if it might kill them, which comes in handy when selecting targets, but a counterattack may throw a spanner in the works.

Sometimes, after taking a swipe at the target and relieving it of all its health, this corpse will simply not go down, and instead makes one last strike, damaging your unit. It’s already dead, but it can still counterattack. On occasion it won’t even wait, attacking first and killing your unit. No doubt it’s all to do with initiative and the enemies counterattack skill, but none of this is relayed to the player. Instead, it just seems bloody unfair, if you’ll pardon my childishness.

Moments of frustration aside, the combat is still a compelling facet of the title. Once one gets passed the sometimes irritating way Eador does things, it opens up into a deep, tactical experience. Different forces, particularly those with different heroes, can be like night and day.

I have a penchant for necromancy and summoning in Eador, and get no small amount of joy from starting off a battle with a tiny force, slowing building it up into a skeletal army, with each fallen enemy joining my ranks. Wizards field the smallest armies, but with the right spells they can overwhelm the opposing force with demons and undead minions, completely outnumbering an enemy.

With the commander hero, one’s experience might be drastically altered. Commanding much greater numbers, the commander can also wade into battle, smiting foes with a mix of magic and martial abilities. He can even be specialized into a priest, constantly healing his many units, not needing to worry about how squishy they are. 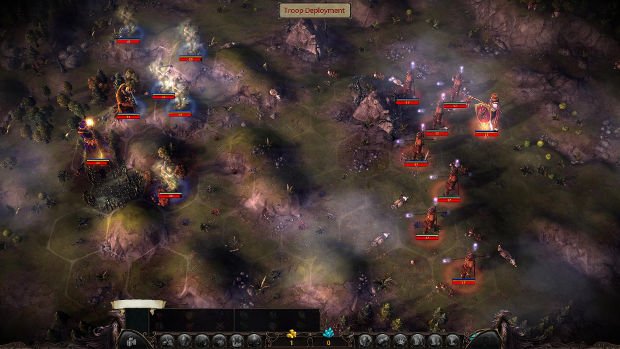 When choosing units, one must take into account their alignment, as Eador is not a world where humans get along very well with evil, rotting corpses given foul unlife. While a broad, diverse army has many advantages, the hit to morale can easily negate them.

This ties into the ruling force of karma, which runs throughout Eador. One’s actions towards the citizens of each province and magical rituals used to get boons or new units have a tangible impact on how a ruler is perceived. Sell too many children to witches or execute too many merchants for not paying you off, and that bad karma will bite you on the arse — if your opponents haven’t already removed it from your body entirely.

The AI is, despite the prevalence of uncontrolled aggression, quite clever. Both on the map and in battle, it can employ some devious tactics, and presents a significant challenge, even on the lower difficulty levels. But that aggression keeps coming back and making it an infuriating adversary. The challenge is something that should be commended, but in its desire for world domination, it can sometimes devolve into just trolling.

On one shard, I was dealing with two AI heroes fighting for the same lord, and every time I’d defeat one, the other would appear. It would have almost no units and start capturing my provinces. Later on, I would have been in a better position to defend them with guard units, but this was quite early in the game, and it wasn’t a tactic I could employ. I’d kill the aforementioned hero, and then by the time I’d traveled back to the provinces I was working to acquire, the other one would have returned and would be doing exactly the same thing.

They were weak and easy to dispatch, and they gained absolutely nothing from their assault, but it kept me from doing anything else. Instead of building up an army, they were simply pestering me. 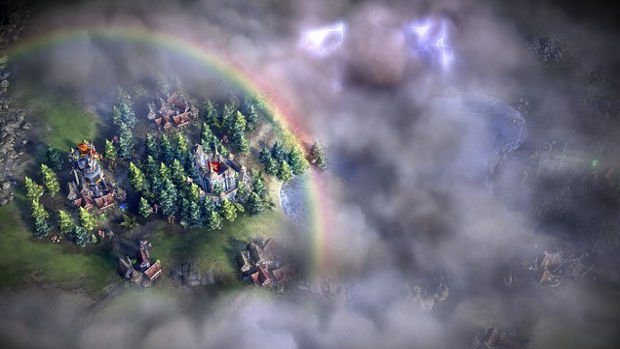 Eador: Masters of the Broken World is laden with good ideas and myriad reasons for strategy nuts to go… well, nuts, but for every compliment I could pay it, there’s a caveat. Strange design choices and a serious lack of polish mars the things it does so very well. For a while, I couldn’t even play the damn thing it was so unstable. Crashes every few minutes, and a bug around every corner made it not worth my time.

After a few patches, I finally managed to play it without fearing that I’d be dealing with a freeze or a crash every time I moved my hero, and I’m glad I stuck it out. It manages to capture what makes titles like HoMM or Kings Bounty so gripping without simply treading the same old ground. Yet it’s still really quite flawed.

If you have the fortitude or patience to put up with the bad, then there’s a treat to be discovered, but I wouldn’t be able to blame those who don’t make it that far.