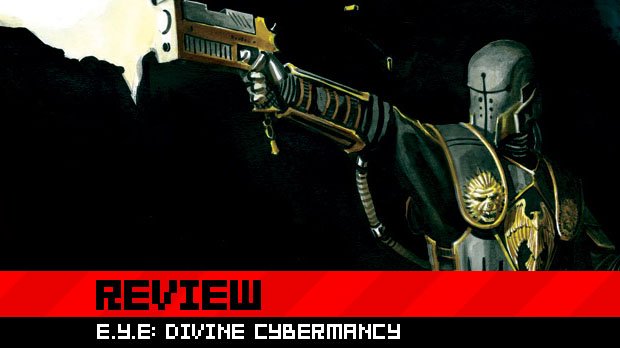 Sometimes, a game comes along that you know should not be good. It wants to accomplish too much, it aims far too high, and it attempts to innovate in ways so strange that there’s no way it could be anything more than a messy, half-baked failure.

On rare and wondrous occasions, those games defy expectations … then they take those expectations and coldly snap their necks, one by one, looking at you and smiling dispassionately the entire time. 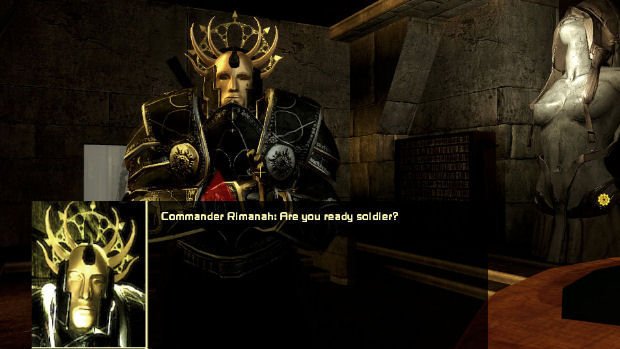 E.Y.E tells the story of a cold war between two rival factions, the Culter and the Jian. As a member of the Culter, you find yourself embroiled in not only a battle between the two forces, but between members of your own group as both your Mentor and your commander enjoy a struggle of their own. At least … that’s what I think the game is about. I could be entirely wrong.

You see, E.Y.E doesn’t make any sense. At all. It’s not clear if this is due to poor localization or the French developers really being that schizophrenic, but the dialog is inane, the narrative is incoherent, and the ending only serves to confuse rather than explain. All that said, I wouldn’t have it any other way.

Confusion, disbelief and rampant unorthodoxy conspire to make E.Y.E the memorable experience that it is. Drawing heaps of inspiration from Half-Life, Deus Ex and S.T.A.L.K.E.R but taking those influences in directions that could only be described as weird, Streum’s FPS/RPG hybrid is an experience that mutates the familiar and never once lets you feel safe. It knows exactly how you’re used to playing videogames, and does what it can to destroy everything you’ve come to hold true. 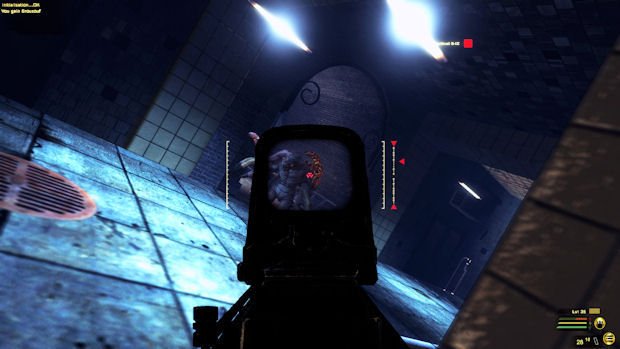 Hacking, for example, is a mindless distraction in most games. In E.Y.E, it’s a full-on turn-based combat simulator, housed within a menu that contains multiple commands. You can scan your opponent to weaken it, boost your shields, employ a mask to deflect attacks, and launch attacks of your own. Whatever you’re trying to hack will attempt to fight back, and it all happens at a shockingly fast pace. Oh, and if you lose? Whatever you attempt to hack will upload a virus to your body, which negatively impacts your ability to play until you purge it. In other words, even if you hack something as simple as a door, the door can hack you back.

Oh, you can also hack anything — doors, computers, turrets, enemies, even other players!

As well as threat from enemy attacks, the player must also battle his or her own mind. After fighting too many monstrous horrors, it’s not uncommon for mentally weak characters to become paranoid or mad. These can have detrimental affects on combat prowess and require the player to undergo maintenance (which temporarily renders them unable to perform any actions) in order to recover. At several points in the game, my character became too “terrified” to fire a weapon. These mental afflictions serve to heap more oddness on top of an already bizarre game. 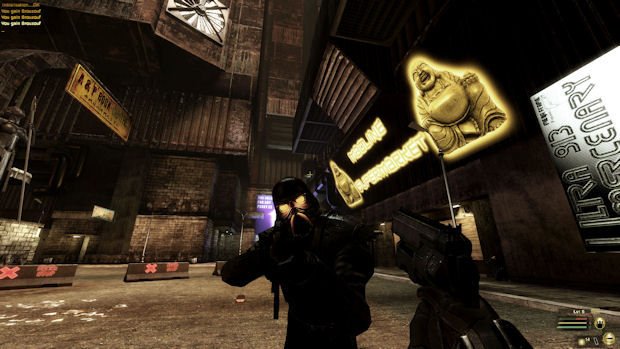 There’s a heavy roleplaying element, allowing players to create their perfect warrior using a range of statistical upgrades, augmented technologies, and Psi powers. There’s potential to become an expert hacker, stealthy operative, weapon specialist, or God-like psychic fighter. There are various stores in the game’s HQ hub, and the menus contain options to “research” technologies, use skill points and purchase physical upgrades that boost a player’s abilities. There’s so much to do, and so many places to do it, that many players may never fully comprehend what they’re capable of.

The Psi powers do a great job of showing just how much ambition is in this game. A starting ability is the power to clone one’s self three times over, and it only gets more audacious from there. Telekinesis, enemy implosion and more are all on offer. The more players level up and boost their Psi stats, the more terrifying these powers become.

If this sounds a bit overwhelming, that’s because it is. You will drown in a sea of concepts, and though many menus are stuffed with information, none of it’s very informative. There are over a dozen tutorial videos to watch, but they explain very little and the game really requires you to just dive in, muddle through, and work it out as you go along. There are things about E.Y.E that I’m certain I still haven’t discovered, and possibly never will, but wrestling this game to the ground and trying to understand it is a pleasure in and of itself. 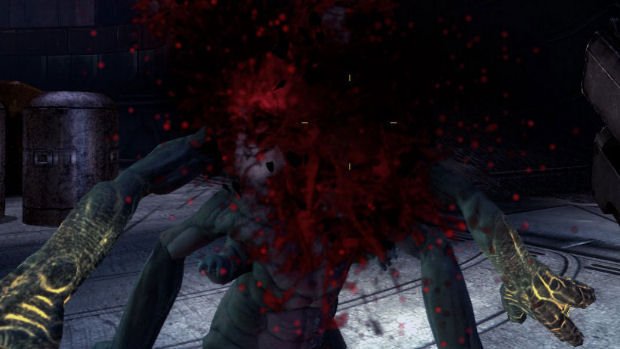 The good news is that getting to grips with every intricate detail isn’t wholly necessary. While a few simple hacks are mandatory, the game is perfectly cool with you just grabbing a gun and shooting everything in sight. You don’t have to fiddle with deep menus if you don’t want to. The weapons are powerful enough to get the job done and the combat, which takes all its cues from Half-Life 2 (even the turrets are damn near identical) is solid and fun without the need for psychic powers or sneaking abilities. For a game to offer so many ideas, yet still provide a fleshed-out base experience, is truly remarkable, especially considering that this is an indie game.

As well as the campaign, which should take at least five or six hours (and features multiple endings as well as a New Game Plus … of sorts), there is also a co-op function. True to the game’s desire to shatter perceptions, it’s fully possible to play the game with thirty-two players, all on the same side. Objectives will be completed within seconds and you might not even see an enemy yourself, but it’s still possible, and that’s what truly sets E.Y.E apart. It doesn’t care if an option might break the game, it still allows that option. You have the freedom to ruin your game if you so desire, though once again it’s not mandatory. If you want an ordinary experience, you can always join or start a server with a four player cap. If you just want to farm some extra mission completion money, you can join the massive games and laugh at the easy ride.

Co-op can be a bit laggy, especially in those huge games, but I found that much of my experience worked quite well. All your cash, equipment and experience is carried over between the solo and co-op modes and multiplayer is a fantastic way of doing some extra grinding. At the time of writing, there is no competitive multiplayer, but it is due to arrive in a future update. 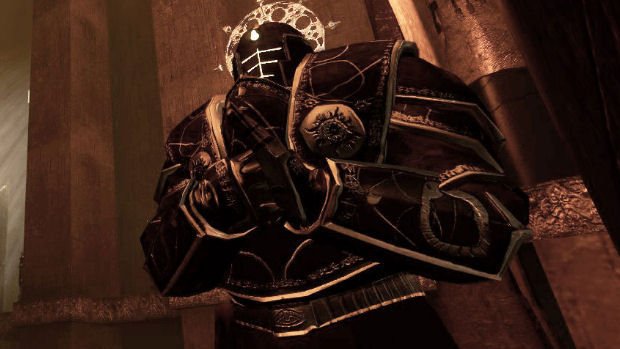 Although players are gifted intensely powerful weapons and have brutal powers at their disposal, E.Y.E is not an easy game. In fact, the difficulty is as schizophrenic as the plot, with some levels feeling incredibly oppressive and others feeling a tad too easy. I don’t mean specific levels, either — the same level, revisited, could be easier or tougher than it was before. The player can toggle difficulties and set the amount of time it takes before enemies respawn, but some unknown deity seems to govern the true challenge of the game, and will just as likely spawn enemies right on top of you every few seconds as it will present a level completely bereft of opposition.

E.Y.E is a weird, wonderful, strangely engrossing experience, but it’s not without problems, the most egregious being map design. Each level is absolutely huge, including the HQ, but environments are sparsely populated and there are many dead ends. There a large tracts of level that appear to exist for no reason, and the distance between objectives can be unreasonable. The HQ is the most irritating, as various important shops are strewn around a map that is at least five times larger than it ought to be.

There’s also no denying that this is a rough game. Aside from graphical glitches and significant loading times, the humble graphics and lackluster sound fail to impress despite the incredibly cool character designs. There are various instances, such as the aforementioned turrets, of elements that feel simply taken and re-skinned from Valve’s Source titles, which contribute to a feeling that one is playing a glorified Half-Life mod. This is a shame, because the game does so much more than a mod that it deserves a lot of recognition that some won’t be prepared to offer. 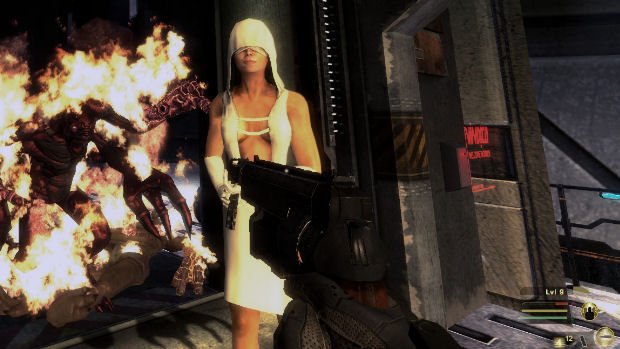 E.Y.E: Divine Cybermancy isn’t a game with wide appeal, and it’s certainly not for the faint of heart. It takes an open mind and a forgiving soul to truly appreciate all that this Frankenstein’s Monster offers, but those that “get” it will be truly inspired. It’s unpolished, but there’s so much depth and so much ambition on display — ambition that is actually realized, rather than disappointingly failed. E.Y.E is a game that set out to be different, and succeeded without compromising the idea that games can be both innovative and fun at the same time.

It’s tough, it’s overwhelming, and it’ll break your brain, but E.Y.E is also one of the most creatively successful, conceptually lavish, mentally arresting games released in a long, long time. This is a title that every fan of PC gaming needs to play, because it’s the perfect example of something that just wouldn’t get released anywhere else, and encapsulates the depth and vigor that the market is known for.