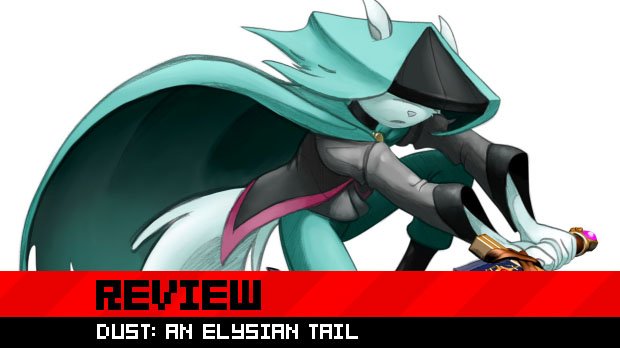 It has been a long, long time since Dust: An Elysian Tail first made itself known to the world. Simultaneously admired for its flowing cartoon animation and written off for being “that game for furries,” Dean Dodrill’s labor of love surprised many due to the fact that it was largely a one-man effort, yet looked like it was made by a full studio.

Since 2009, the game has only gotten more impressive, and it’s finally ready for public consumption. Do not let your prejudices turn you away — Dust is more than just “that furry game.” Those taking the plunge will find one of the most rewarding Xbox Live Arcade games to hit the scene in quite some time. 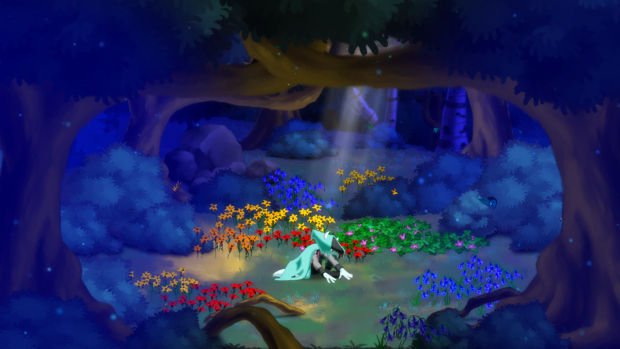 Our mammalian hero is Dust, a stereotypically amnesiac protagonist who wakes up from supposed death to find himself chatting with a magical sword and a flying cat creature named Fidget. The titular hero embarks on a quest to find out who he is, why he’s wielding a sapient blade, and exactly who the bad guys are in a story that manages to be quite compelling despite its fairly archetypal nature. The idea of identity, what actions define us as people, is explored in strikingly honest detail, and by the end of the adventure, players should be incredibly satisfied with the genuinely heartwarming conclusion.

To reach that ending, Dust will need to explore a variety of environments, tackle screens bursting at the seams with enemies, and rack up some quite ludicrous combos as he does so. Elysian Tail is heavily inspired by “Metroidvania” style games, taking the form of a sidescrolling action-platformer with an emphasis on exploration and acquiring new powers to reach previously inaccessible areas. As Dust builds a map of each environment, he’ll stumble upon high cliffs, small tunnels, and walls of vines that he won’t be able to bypass until coming back later with double-jumps, slide maneuvers, and magic climbing powers. There’s a ton of exploration to do as well as a number of item chests and XBLA game character cameos (along with a health bonus for each one found) to discover. 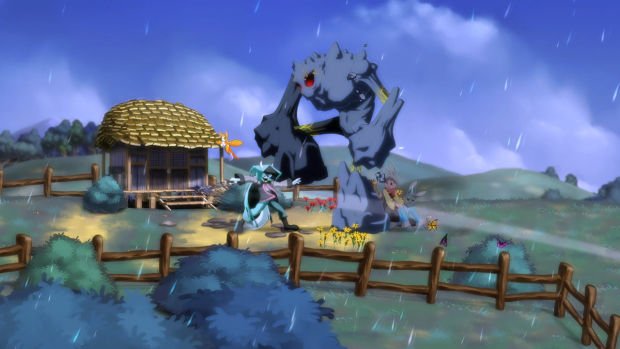 Combat is fast-paced and combo-oriented. Dust can dodge left and right using the shoulder triggers, perform a variety of sword attacks using X and Y, and parry enemy blows by holding the standard attack button at just the right moment. However, in order to rack up the big combos and gain a huge experience multiplier, Dust will need to use Fidget’s magical prowess alongside his “Dust Storm” ability. With Dust Storm, our hero twirls his sword at a rapid pace, allowing him to register a large number of hits for a few seconds. Fidget, meanwhile, can spray a variety of magic projectiles that are weak on their own but can be sucked into the Dust Storm to create encompassing tempests, sending enemies high into the air and dealing an overwhelming number of hits. By using a mixture of regular attacks and Storm powers, players can score hundreds, potentially thousands, of hits. Seeing how high that number can climb before taking damage or running out of bad guys to kill is a big part of the challenge.

Though battles start out fairly easy, things get tricky around the halfway mark, when enemies pour into the screen and literal chaos ensues. It can be difficult to keep track of what’s going on, though the bright visuals do a solid job of allowing one’s eyes to stay focused on the hero. It’s impressive how the fighting manages to be so fast yet never feels like it’s overloading the player’s brain, but even more remarkable is how tight the gameplay feels. Cartoon animations usually don’t lend themselves well to action-platformers, due to the precision needed in timing hits and landing jumps. Somehow, Dust pulls it off to create something that flows as smoothly as any cartoon, without feeling as “floaty” as other games that have attempted similar feats in the past. 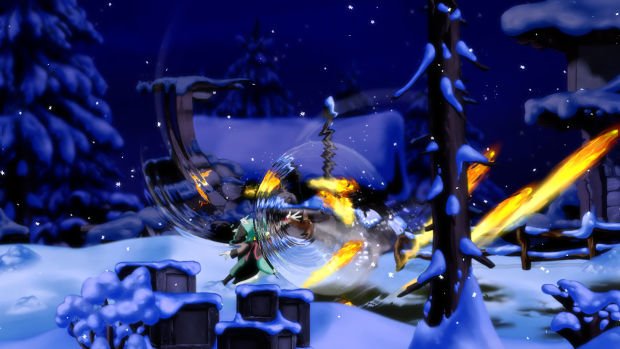 There are moments of frustration, such as Dust’s inability to quickly recover from knockdown attacks (especially egregious during spike-laden platform sections that can knock him back a considerable distance), and there are a few areas where better player feedback would have been preferable. Clearer warning when health is low would be appreciated, since combat is so hectic that it can be easy to forget to heal. There was also one area where I needed a particular magic spell to advance but wasn’t told which one — I didn’t know I’d missed picking it up over an hour beforehand. Also, if anybody works out how to use the remote blacksmith option, do let me know. The game informs you once but never again, and I found nothing in the menu or inventory to help me.

These moments of aggravation are few and far between, and other instances of shouting at the screen are more or less the player’s fault. While not as spine-crackingly hard as a number of Castlevania games, Dust has its moments where skill and quick wit are all but essential. These moments can be stressful but present a beautiful sense of triumph once conquered.

The game can be cleared in around seven hours, though there are a large number of side quests, secrets, and timed trial arenas to be conquered, all of which add to the runtime. In terms of what XBLA titles usually offer, there’s a lot of meat on these bones, and those looking for a downloadable console title to really dive into will find a lot to enjoy. 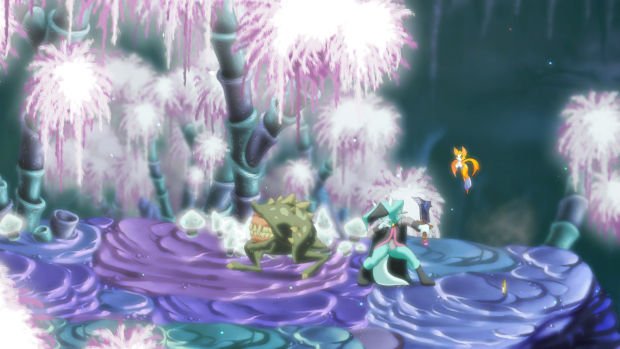 While there’s a lot of content on offer, there’s no denying that it can get a little familiar after a while. Once a player has worked out how best to get a high attack chain going, there’s very little reason to deviate from the pattern, while battles, for all their visual busywork, can grow weary at times. A few enemies show up with unusual attacks that break the flow, but even they can usually be dispatched with enough spamming of the Dust Storm. Never does the game become too boring, but it certainly does require a few session breaks now and then, just to keep the freshness from fading too fast.

One can’t discuss Dust without applauding the aesthetic elements that won it so much favor in 2009. Graphics may not make a game, but they certainly don’t hurt, and they greatly contribute to the vivacity of Elysian Tail‘s experience. The wonderful color scheme really pops on an HDTV, while the intricate animations are wonderful to behold, from clothes waving with air pressure to adorable deer and bunnies that bound through beautiful scenery. The soundtrack is similarly evocative, with a gorgeous set of tunes that perfectly accompany the visuals. The voice acting is a bit less consistent, ranging from acceptable to downright annoying, but most of the acting is competent and extensive for a humble indie project. 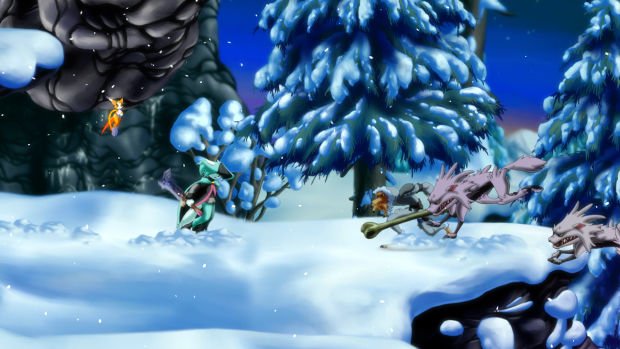 Dust: An Elysian Tail took a long time to reach us, but the wait has most certainly paid off. Few Xbox Live Arcade games are superior, and most of them pale in comparison. At times it can get a touch repetitive, and there are a handful of exasperating moments, but this is nonetheless an arresting game that offers more (and offers it well) than the average XBLA title. Yes, it’s full of anthropomorphic rabbits and foxes, but if that stops you from playing, that’ll be your loss. You’ll be missing out on a fine action-platformer, the likes of which we don’t see enough of these days.

If anything was worth going furry for, Dust is it.