The best hugventure you can embark upon

I finished Dropsy about a week ago. Though an increased workload at the ol’ day job slowed down this review, I’m grateful that I had extra time to put together these thoughts. Most would take that to mean that Dropsy is divisive in some way, but that’s far from the truth.

My time with the unfortunately-faced clown has provided me food for thought in a way that the majority of games can’t even approach. His poignant journey is seared just beneath my eyelids, and I wouldn’t have it any other way. 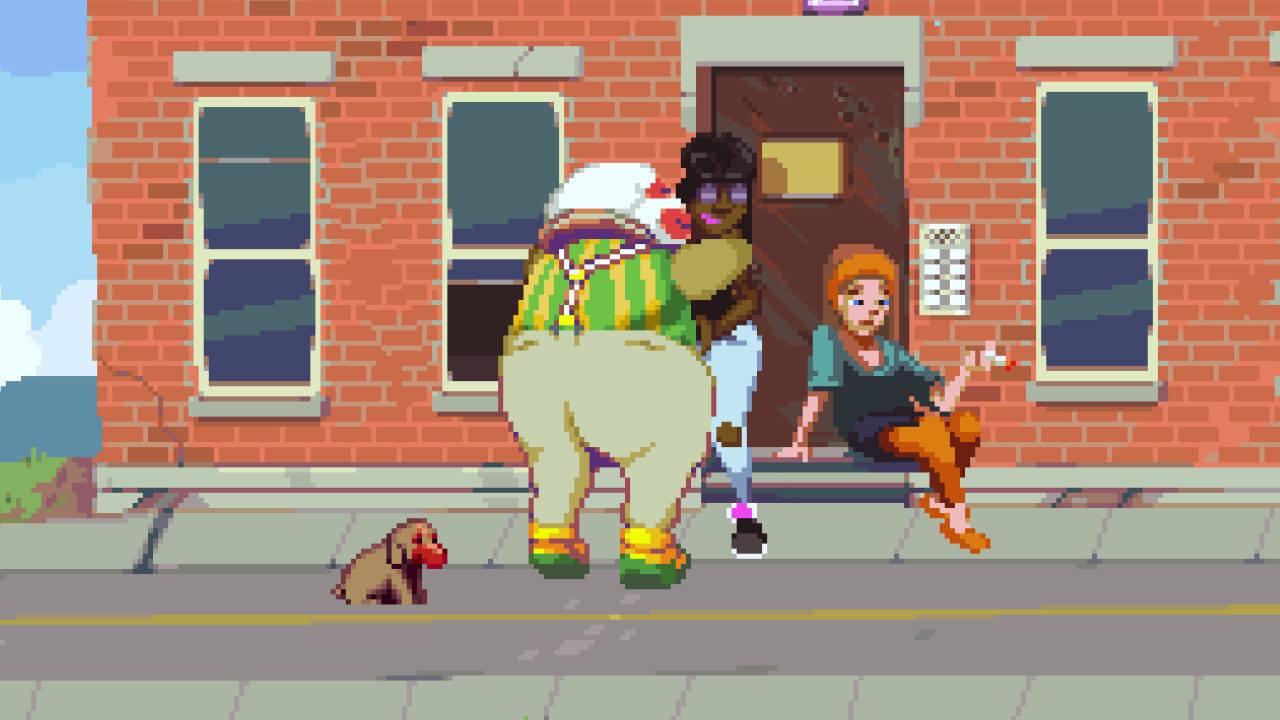 Last week I said that Dropsy‘s music was “brimming with the earnestness you feel when you’re about to tell someone you love them for the first time.” I’d like to extend that statement to include the entirety of the game. While it’s hard to swallow that idea when it is juxtaposed against the titular clown’s disquieting countenance, I assure you that his adventure is more uplifting than it is horrifying.

Some background: Dropsy had always looked different, and had a hard time communicating with his fellow humans. Animals, however, always found a fast friend in him. This ability to talk to creatures furred or feathered gave him a skill to perform and please people with. Through use of this talent, Dropsy convinced the crowds to love him. He and his parents were Big Top circus performers until a mysterious accident set the tent and their reputations ablaze. Daddy Dropsy survived, but Mommy Dropsy didn’t.

A short cinematic conveys all of this to you, and your first “quest” is to leave a memento on your mother’s grave in the cemetery on the other side of town. Though it starts off on a somber note, Dropsy quickly becomes an exploration of what it means to bring happiness to a stranger. Dropsy wants to hug everyone to show him that he loves them the way he hopes that they can love him, but most people aren’t keen on the idea. By helping each NPC in the game by way of light puzzles, you can eventually earn that sweet, short embrace. 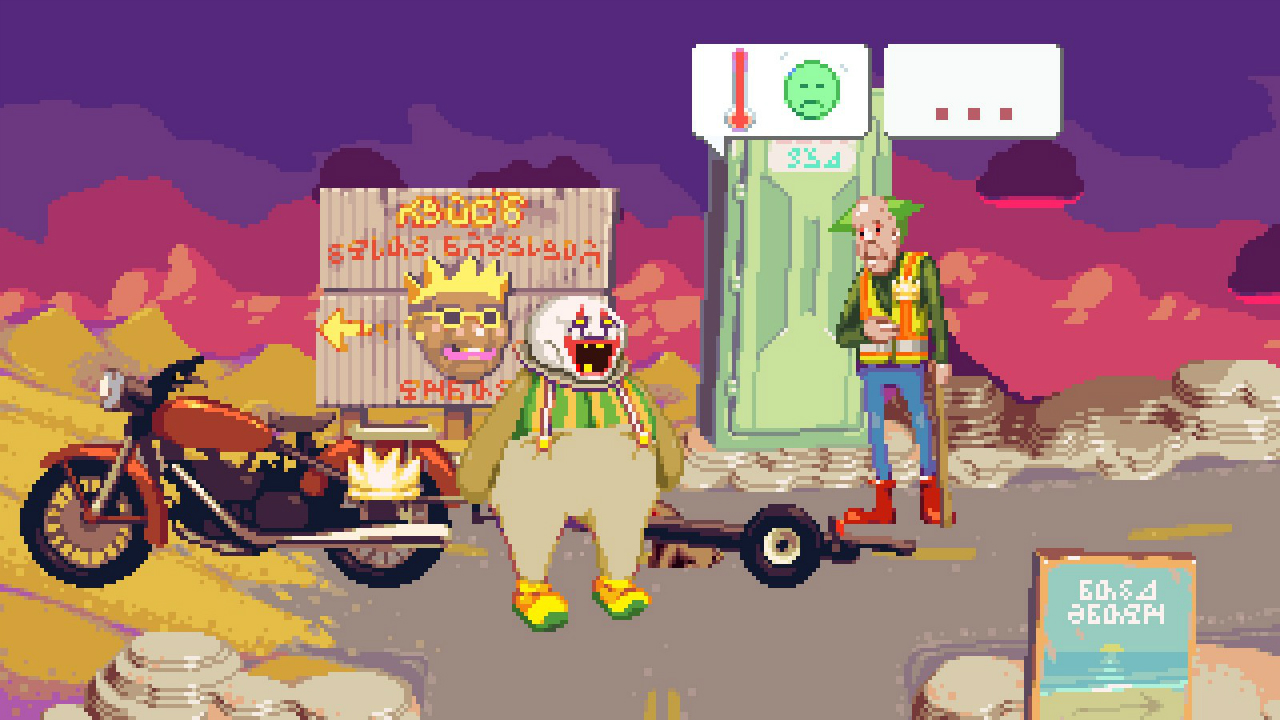 Whenever Dropsy meets someone in need, thought bubbles appear over their heads to convey what it is they want or need. The difficulty lays in trying to parse what exactly these small pictures mean, and it can be frustrating at times. But the beauty of this is that it places the player right in Dropsy’s clown shoes, effectively showing you how hard it is for the poor guy to communicate. If each character could just verbally tell you what they required, this would be a short game. But that isn’t the world Dropsy lives in.

Though there is the aforementioned main quest, Dropsy is non-linear in such a way that you can wander the entire city (a beautifully pixelcrunchy mish-mash of city, desert, bayou, and forest) within the first few minutes. People that you meet early on might have secrets that you won’t unravel until the back half of the game, which I completed in about five hours. You’ll gently float through town with your queue of animal buddies, spreading love to all who will receive the message.

Most puzzles are solved by having the right item stored in Dropsy’s overalls. These often won’t require too much of you, though there are a couple of tricky scenarios in the latter half of the game. There are a couple of pixel hunts and logic leaps that aren’t immediately apparent, but that is mostly in regard to side quests. You don’t have to make everyone happy in order to complete Dropsy, but I recommend having multiple saves so that you can go back and earn all of those sweet hugs before the ending sequence locks you out. 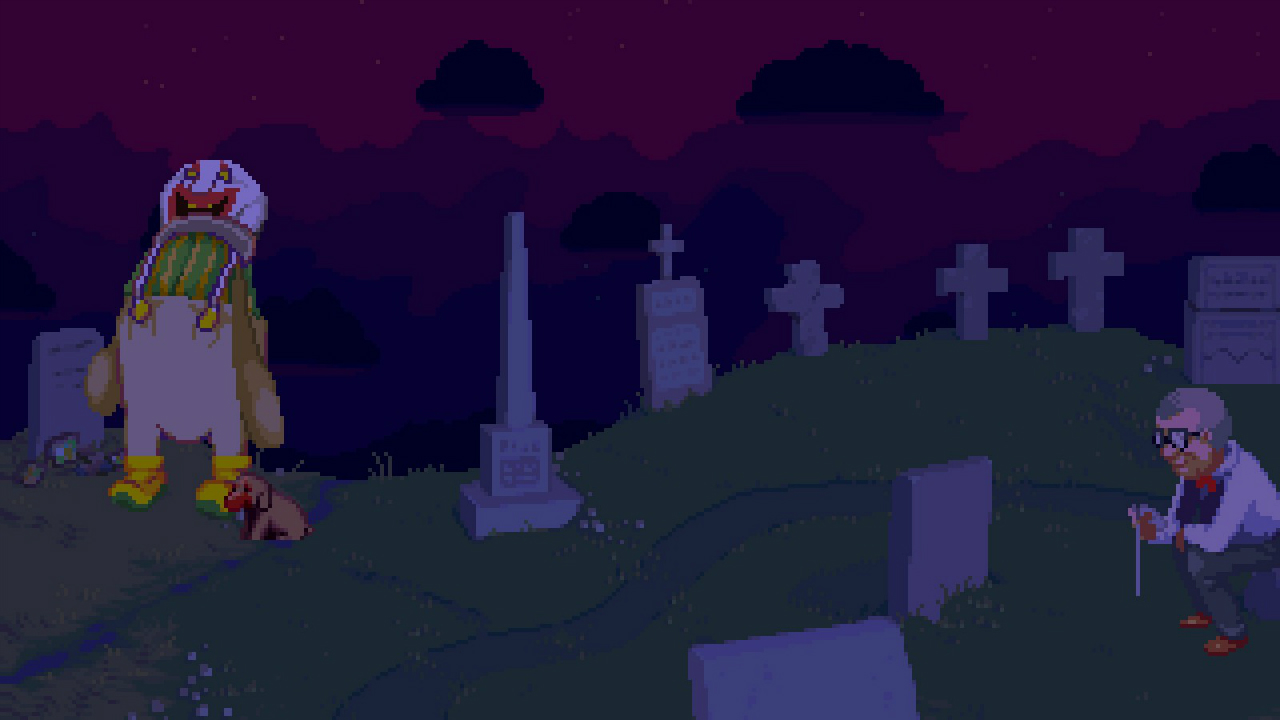 While many suspected that this would be a horror game before it came out or that there would be some disturbing twist halfway through, that never ends up being the case. Instead, this is a celebration of the small victories we achieve when we become even the slightest bit closer to someone. Dropsy’s appearance lends itself to terror and has lead to his alienation, but his presence brings an indomitable cheer to anyone who gives him a chance. Every so often, Dropsy subverts this tone with an emotional kick right in your heart’s crotch, and it hurts in the best way.

In the interest of being as earnest as this game, I felt a hope while playing Dropsy that I don’t usually associate with gaming. This a point-and-click where your main interaction with the world is a hug button. You can play as a dog who has a map with all of his favorite places to pee, who wiggles his eyebrows when he finds a new place to mark. You can re-unite families or learn more about your own. There’s an optional button in the menu to turn on the sound effects for your clown shoes.

This levity, this world, and these people are going to be with me forever. If you’ve ever complained about there being too much violence in gaming, or that games are all the same, and you don’t play this… I hope somebody hugs you.