I wonder if people will look at the above screenshot and say, “oh, it’s another puzzle game,” and just scroll on past to the next bit of news or info. I would understand that inclination, as the downloadable services seem to have a real glut of games from that genre and it can be difficult to care much when there are so many options out there, many of which are mediocre.

Those people would be missing out. Not only on my stunning charm and wit, but also because Droplitz is amazing. If you skip this review, I’ll probably never forgive you. 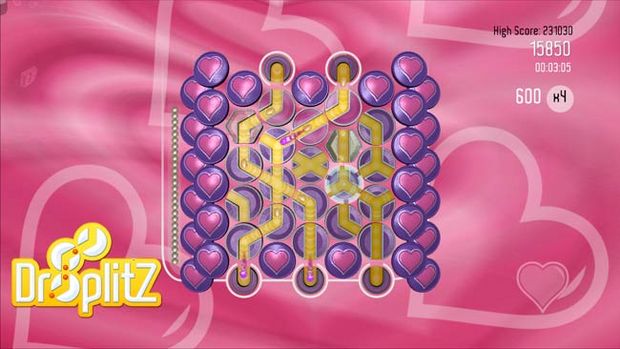 In Droplitz you are tasked with guiding gel-like blobs (called Droplitz) through paths created by manipulating circular dials. Droplitz are released periodically from Droppers at the top of the screen and are collected by Collectors at the bottom. If a Droplitz hits a dead end, it is lost. A meter on the left side of the screen keeps track of the Droplitz you have on reserve and, when the last of your Droplitz are gone, the game ends.

To keep your supply of Droplitz up, you’ll need to make sure they reach their destination by highlighting dials and rotating them. Dials come in five different configurations and can be rotated into six positions. Some dials pass straight through, while others create forks in the path that will cause Droplitz to split in two as they traverse them. Another dial that resembles the Droppers and Collectors will actually function in the same way as if they were at the top or bottom of the screen, releasing or catching Droplitz depending on their orientation.

When you complete a path that begins with a Dropper and ends with a Collector, all of the dials used to construct the path become locked into place and a special, pink Droplitz is released from the relevant Dropper. This Bonus Droplitz follows the route you have created and gives your meter a small boost. 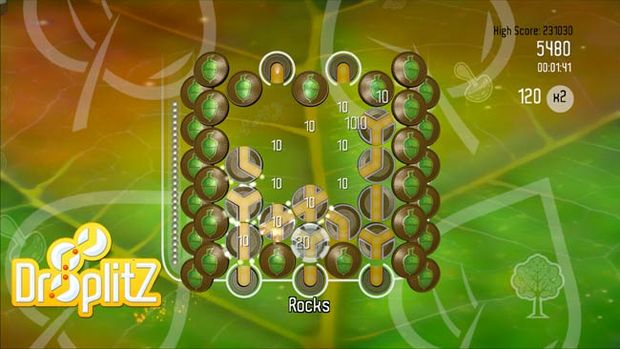 More importantly, it acts as a time limit to create additional routes which release more Bonus Droplitz. Every pathway you have created adds to a score multiplier. When all Bonus Droplitz have reached the end of their routes, all the dials used to make routes are removed from the board to be replaced with random ones dropping in from the top of the screen. If a new pathway is formed once these new dials appear — either through luck or planning — your multiplier can continue to grow. Otherwise, points are awarded based on the number of Droplitz caught, bonuses for making effective use of dials and the multiplier you earned.

This alone is addictive as hell. It can take a little bit of adjustment to the gameplay, but you’ll soon be seeing how dials can be twisted around to maximize the number of paths. Making use of forks to multiply Droplitz result in massive potential for routes and the pressure of having to complete new paths before the old ones have run their course is exhilarating. 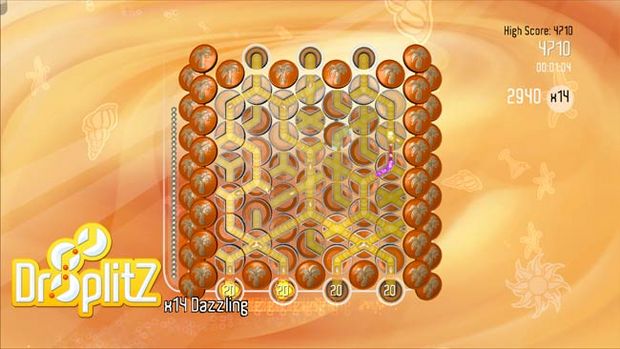 Droplitz comes with four modes of play. Three of these modes must be unlocked through play by reaching score thresholds. The latter half build upon elements introduced in the previous half, giving the game a real sense of progression.

Classic Mode, the only mode available when you begin play, works as described above. Every time paths are completed and dials are removed from the board, you progress a level, which very subtly increases the speed at which Droplitz are released. And for every five levels, the game changes themes, introducing a new visual look and music.

Speaking of the music for a second, it’s excellent. Tracks range from soothing to exciting, but they never distract from the gameplay. The songs are a perfect complement. As you unlock themes, you can even choose your favorite to be used as the theme for the game’s menus.

Zendurance Mode, the second in the game, is just Classic Mode without the incremental difficulty. It’s a survival test to see how long you can continue to keep your game going at a nice, even pace. Any of the themes that you have unlocked can be used as the background for your game and the mode is excellent to just chill out to for a while. 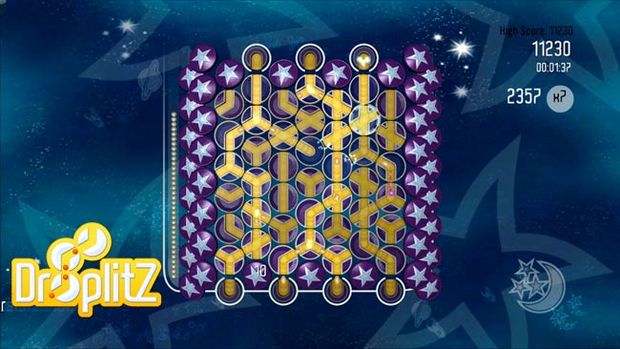 Power-Up Mode follows next. Blue Droplitz are occasionally tossed into the mix in this game. If you can guide a blue Droplitz to a collector, you’ll be rewarded with one of four special abilities to give you a slight edge. These power-ups can destroy troublesome dials that are making it difficult to form your paths, slow down the movement of your Droplitz or even stop all movement for a while and give you a chance to build some quick routes.

Power-ups become much more important in Infection Mode, the final gameplay type to be unlocked. Dials become covered in green gunk in this mode of play. When infected, a dial rotates excruciatingly slow and, if allowed to remain on the board, these dials will infect neighboring dials as well. It becomes difficult to keep a chain of paths going when you have even a couple of infected dials on the board, as the pink Droplitz often can reach their destinations before a gooey dial finishes its slow rotation and links up to make a new route.

Each of the modes (except for Zendurance) has nine different boards you can play on, all of which need to be unlocked. When you gain access to a mode, you can only play on the simplest configuration and must reach a specific score threshold to unlock neighboring boards which will increase the difficulty or the size of the playfield. This provides some worthy challenges in trying to get everything unlocked, as some of the score goals required can be awfully high. 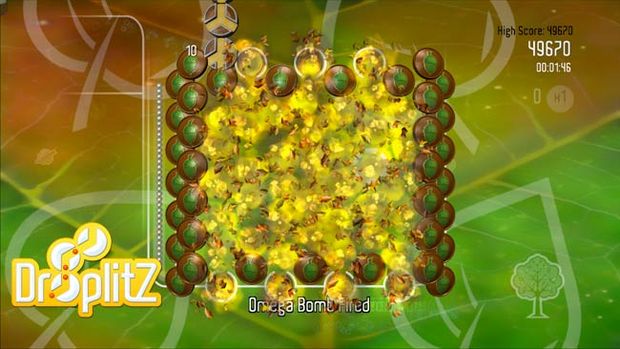 I fear that I may be doing the game a bit of a disservice in my description. Fact is, once you start playing Droplitz, all of the concepts make sense within moments of experiencing them. And, the next thing you know, three hours have passed — a fact that the game helpfully points out by displaying your total playtime when in the menus. I have utterly lost myself at times, so compelling is the experience.

I’ll just come out and say it: Droplitz is the most addictive, challenging and fun puzzle game I have seen in years. It’s simple to play, challenging to try and master and completely absorbing. The variety of modes offers something which can be enjoyed regardless of whether you want to obsessively push for a higher score or simply relax after a long day. If puzzle games are your bag, even a little bit, you owe it to yourself to play Droplitz.

Score:  9.5 — Superb (9s are a hallmark of excellence. There may be flaws, but they are negligible and won’t cause massive damage to what is a supreme title.)