Dragon Quest Builders is one of the only games on the market that arguably does Minecraft better than Minecraft. It took the open-world, craft-em-up gameplay of the possibly best-selling game of all time and gave it all meaning, adding a real sense of purpose as you journeyed throughout the land, rebuilding what once was. Dragon Quest Builders 2 is attempting to repeat that success, this time building off the events of 1987’s Dragon Quest 2. Whether or not it’s as successful as the original will depend on what exactly it is you want out of these games. 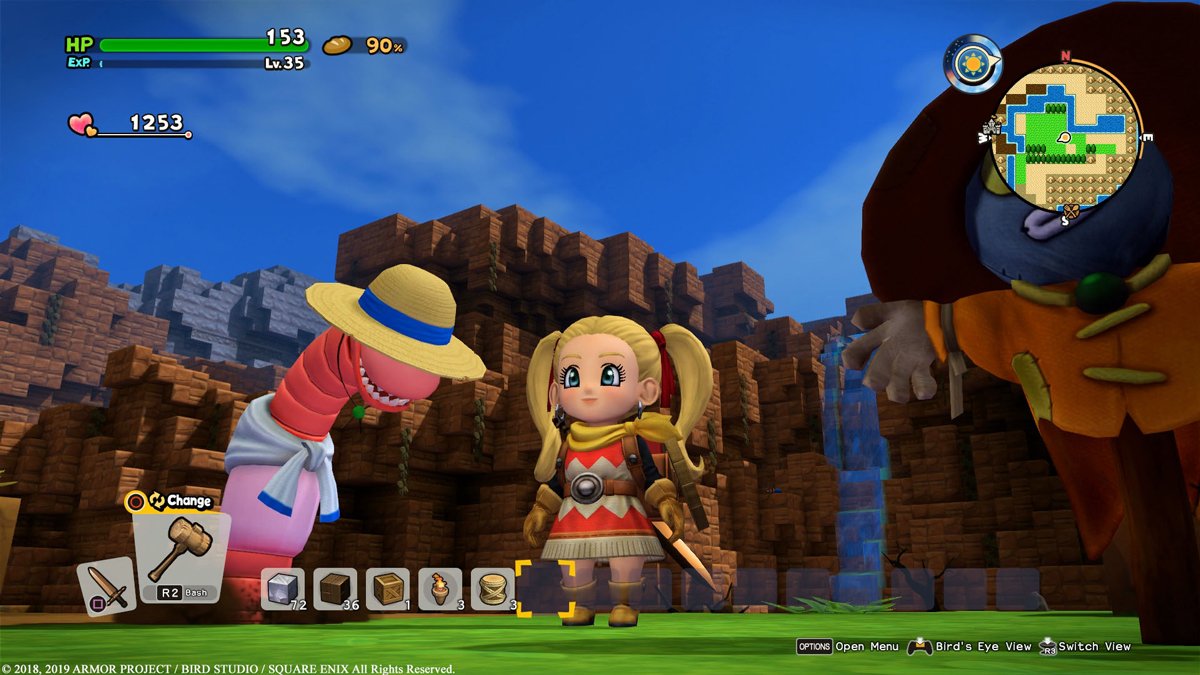 Much like the first game, Dragon Quest Builders 2 presents players with a “what if?” situation that follows one of the games in the mainline series. Here, in the years following the defeat of Hargon and Malroth, a group of disciples known as The Children of Hargon carry on his vision, brainwashing the people of the world into following a life of despair and destruction in a plotline that is surprisingly anti-religion. I’m not sure if that’s how Square Enix intended for it to turn out, but it’s not hard to see parallels between the accusations lobbied at this cult and the actions of actual organized religions.

The Children of Hargon want to see the world slowly die and any attempts to revive the towns, farms, and cities that once stood are met with violent retribution. It goes without saying that this cult hates builders, which is why Builders 2 kicks off with your builder on a prison ship, sailing off towards their inevitable demise. A strong storm ends up saving them, washing them ashore the Isle of Awakening. It’s here they meet the aforementioned Malroth, but as an amnesiac with a human form. After meeting the spirit of the island, the pair set off for nearby lands to recruit people to rebuild the Isle of Awakening to its former glory.

Unlike its predecessor, Dragon Quest Builders 2 is a very straightforward game. It doesn’t feel as open as its predecessor, and the pioneering sense of discovery that resonated through every chapter of Builders is absent in Builders 2. Instead, the flow of the game is very similar to a standard Dragon Quest game: you and Malroth discover a new town and try to solve all of its problems before moving on. It’s a formula that allows the game to slowly introduce new features and ideas to the players, but for those returning from the first game, these new ideas may be introduced a bit too slowly. The much-talked-about gilder cape is introduced on the first island you visit, but concepts like riding animals, coloring, and metalworks can take hours before you get those abilities.

Pacing is just one of the issues that extend throughout Builders 2. There are not very many islands to explore, so the game will do whatever it can to stretch out how much time players have to spend in each core area. I’m fine with having to rebuild these towns — that’s par the course given the last game — but every time I reached near the end of each storyline for each island, the game would find one or two more last second objectives for me to complete before I could really move on. Don’t get me wrong, the story is worth going through. You’re going to love Babs and it really pays off at the end when the various story threads come together. But the padding of playtime is quite evident, even with the new fast-travel ability, and a bit frustrating when you’ve seen everything a certain island has to offer. Not helping this at all are certain sections with unskippable or fast-forwardable dialogue and the similar rhythm of each island’s storyline that can lead to a sensation of deja vu.

My other main issue with Builders 2 is it does nothing to improve on the combat from the first game. It’s still a simplified hack-and-slash, with mobs of enemies attacking your settlements every once in a while and big boss battles that throw in an extra element you have to account for. It’s serviceable, just as it was last time, but outside the addition of co-op attacks, not nearly enough has been done to introduce more of the Dragon Quest combat system into the game.

But I don’t play these games to fight, though I am forced to; I play them to build and Dragon Quest Builders 2 is an exceptional title when you’re left to create these towns and villages. There are still floorplans and blueprints you’ll have to follow for some rooms, but for most, you’ll be allowed to choose how you construct it so long as you include a specific list of items.

Some of the choices made here are weird, such as inn signs having to go on the inside wall instead of the outside or forcing players to put a door on a bathroom in one area but allowing NPCs in another to take a dump where everyone can see, but there are so many options and design pieces available that you can really create some spectacular rooms and buildings. Space is an issue on each of the core islands of the game — it never seems like there is enough room for everything I wanted to build — but I was able to more efficiently build up my towns this time around thanks to the first-person camera mode. It doesn’t really help with combat, in fact, it makes it worse, but I preferred building in first-person from the moment I first used it. 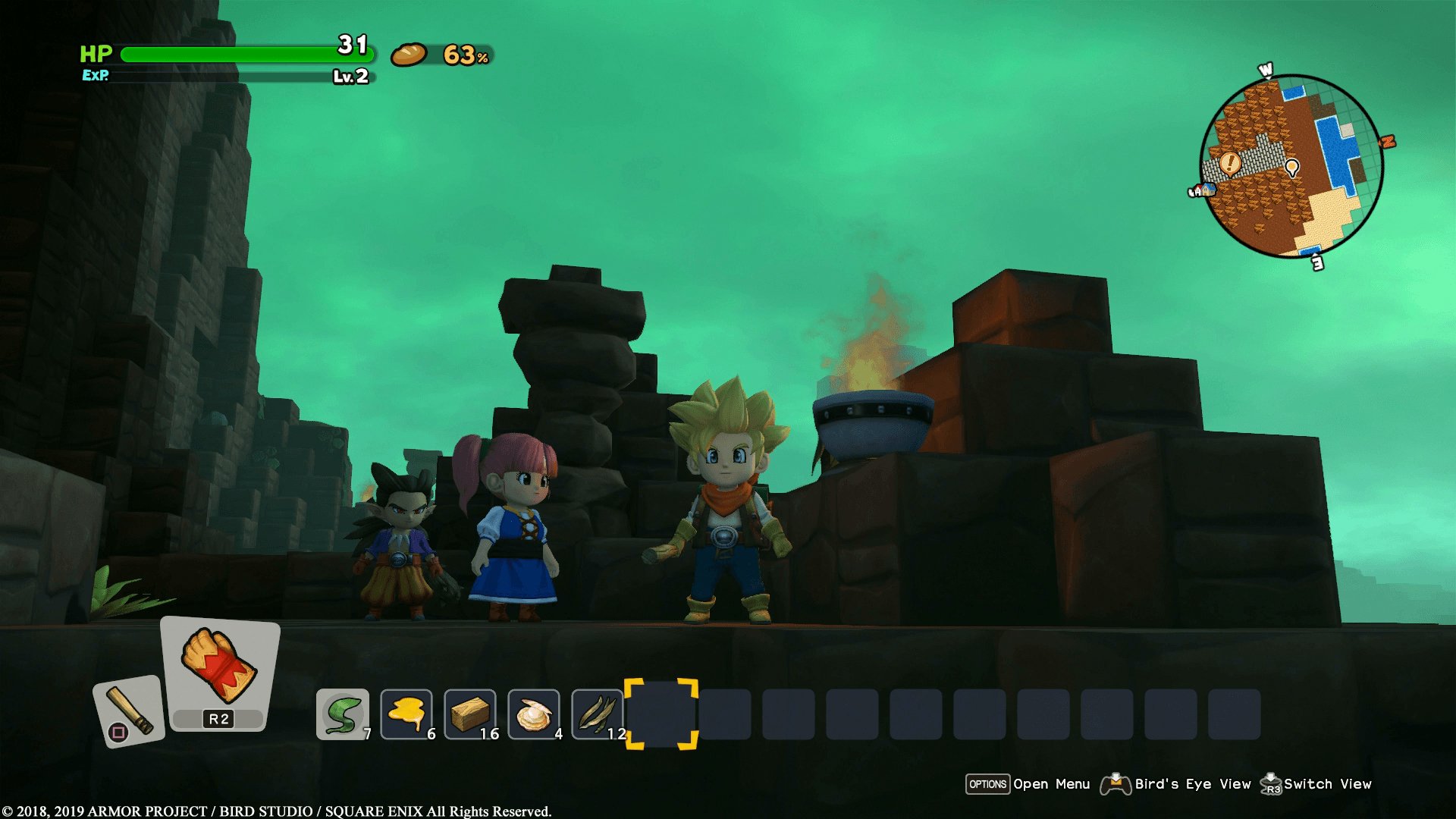 Other additions to Builders 2 don’t have quite the same effect on me. The glider cape is under-utilized outside of several specific moments. Underwater travel is more a nuisance than an exciting new way to explore more of the game. And I’m not too keen on Malroth’s A.I. and its insistence that he do everything I do (if I hit a rock to collect some stone, he’ll go run and find a rock to hit so he too can collect some stone). I will say I’m thankful I no longer have to worry about my weapons and armor degrading, but I don’t think that’s a big enough of an addition to help elevate this game over the original. There is four-player co-op, however I was unable to test it out during this review period.

It’s easy for me to say Dragon Quest Builders 2 is a good game because it’d be a lie for me to say otherwise. The groundwork laid by the first title is still sound, but it just didn’t grab me the same way its predecessor did. That doesn’t mean I’m going to stop playing anytime soon — I still have my home island to complete — but it does mean it’s not going to get my undivided attention for weeks-on-end like the first game did.