To play the first, oh, ten minutes of Dragon Age II: Mark of the Assassin is to gaze into the abyss, to confront everything weird about videogames and the culture that surrounds them.

The scene: protagonist Hawke is enlisted to help an exiled assassin, Tallis, break into the estate of an Orlesian nobleman to pilfer some jewels. Playing Hawke as an intrepid dagger-for-hire made sense when he/she was a hardscrabble immigrant; it’s less convincing now that (my female) Hawke lives in a mansion and wields considerable social capital, having saved Kirkwall from imminent destruction and all.

Hawke is eventually convinced to follow a complete stranger to a foreign country to steal from a powerful oligarch when Tallis, voiced by Felicia Day, coos, “That’s just what you do, isn’t it?” The corollary goes unsaid, but here it is: “It is when you’re the hero in a videogame.”

That Day — perhaps the most well-known ambassador of nerd culture — is involved is equally distracting, serving as an umbilical link to real world and reinforcing how arbitrary and contrived the endeavor of videogaming can be. 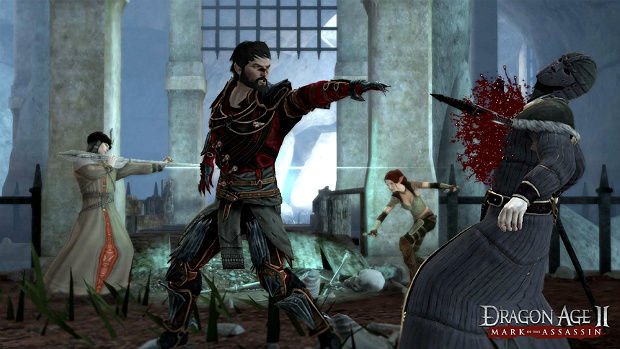 Despite its artifice, Mark of the Assassin fares better than Legacy‘s otherworldly premise. Instead of being fodder for some hokey blood ritual, Hawke is once again cast as a political actor, a doer of great deeds. To have Hawke’s accomplishments reflected back to the player is one of the strengths born from designing Kirkwall as a consistent (albeit relatively static) city.

There’s very little to say about the bulk of Mark of the Assassin — its Dragon Age II with an overblown and crudely drawn French accent. There are new enemies called ghasts, but they aren’t particularly interesting. Like Legacy before it, Assassin‘s strength lies in the way it expands the world of Thedas, with changes to mechanics and quest structure being largely secondary. 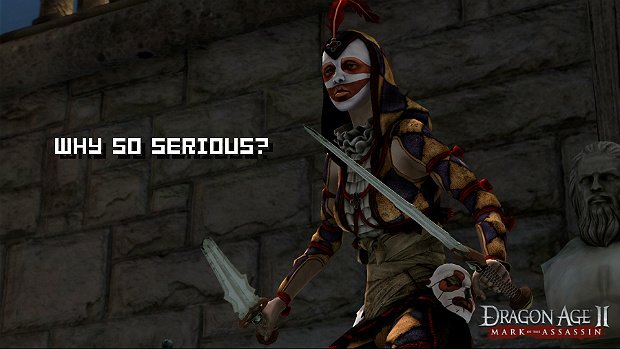 There are a few exceptions, though. First, there are extended stealth and puzzle sections that range from passable to unoffensive. While nothing special in their own right, these setpieces provide a nice break from stabbing people in the neck until they explode. (Incidentally, the new gear and stat boosts aren’t doing much to make Hawke’s neck stabbing qualitatively better or worse, just stabbier. She’s pretty much built to perfection and this point, her telos being destruction.)

Second, the boss fight in this DLC is pretty good, not to mention remarkable for the way it marries Dragon Age II‘s action-genre affections to its stat-crunching, role-playing roots. If BioWare insists on adding environmental and spatial elements to its boss fights, Assassin‘s action-lite overlay is the way to go. Think the Rock Wraith fight from Act I of DAII, instead of the awful Corypheus debacle from Legacy.

(Pro tip: turn all subtitles on for this fight. Your teammates bark useful information during the course of the fight, but it often gets lost in the din and explosions. Taking their advice improves the end of the game dramatically, especially on higher difficulty levels.)

Finally, BioWare has apparently dropped out of the “from the rafters” school of enemy design. The only enemies in Assassin who pop into existence are magicked there by an Arcane Horror.

It is also balanced pretty well — I can only think of one difficulty spike — and branches in a few typically BioWare-ian ways, plus a few subtler ways that take a second playthrough to notice.

Still, the crux of Mark of the Assassin is that it’s, y’know, more Dragon Age II. 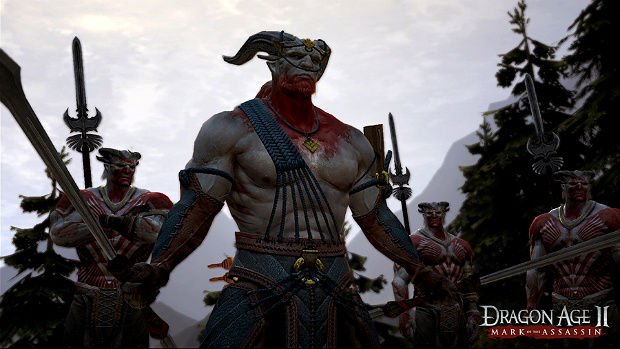 Even Tallis — who joins your party complete with her own skill trees and algebraic tactics — is more important as a catalyst for the story than for her role in combat. She’s basically an Isabella clone with a less pornographic bust, and Assassin isn’t long or varied enough to really explore her mage-smashing specialties. From that perspective, it’s tempting to wish Hawke could whisk Tallis back to Kirkwall as though she were another Seb Vael or Shale.

However, considering her position as an outsider — she’s an elf who makes her living as an assassin and holds, as you’ll discover, some pretty out-there beliefs — I’m glad that BioWare chose to keep her activity limited to this particular quest. Keeping her around any longer would ruin the mystique. Of course, it’s almost surely the result of technical considerations, but it serves the story too. 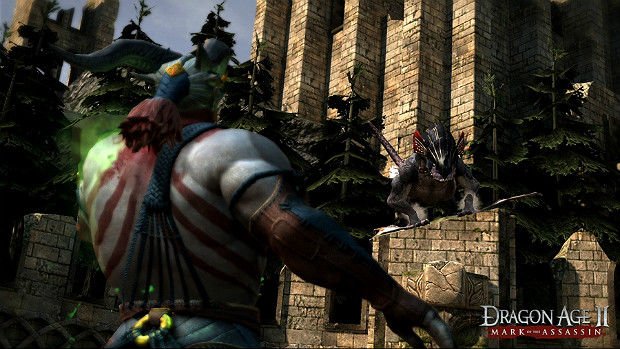 This is where BioWare’s casting of Felicia Day morphs from a vaguely disconcerting boondoggle to a legitimate design choice. Tallis is voiced with an American accent, which immediately sets her apart from the rest of the British Roman cast. This reinforces her status as a cultural “other” while adding characterization that has nothing to do with the writing or plot of the game.

In the service of the bare-bones heist plot, Mark of the Assassin explores different cultural territory than the mage-templar dialectic that dominates so much of the first two games. There’s a hitch, though — Tallis is a cipher for a hitherto under-explored subset of Thedans, but players don’t have a baseline of understanding of her background and culture. The result is that Tallis is written to be subtle and nuanced, but — Dragon Age II‘s dialogue wheel may be partly to blame — she comes off as vague and obtuse. This represents a fundamental problem for BioWare — the strength of Dragon Age DLC in general is that it expands on a rich, expansive world, but if players don’t understand the world they’re being thrust into, the entire enterprise is undermined.

Nevertheless, Mark of the Assassin is a lighthearted and straightforward game that does most things right and nothing truly wrong. BioWare DLC has long been the purview of that company’s tinkerers and iterators, its refiners and experimenters, and it’s nice to be able to track the team’s progress. Fans might be better served by longer, more fully-realized content, but the fact remains that I’m always looking forward to any excuse to dive back into Thedas.