Double Fine did a terrific job with Sesame Street: Once Upon a Monster — so much so, that I couldn’t help but be jealous that kids were getting such well-designed Kinect games. For all of the millions of people who own the device, and given the technology powering it, the overall software quality is decidedly not where it ought to be.

At the same time, I have to be thankful for developers who want to make games for children and take the job as seriously as any other big-name project. With Happy Action Theater, Double Fine is once again using Kinect to target a younger audience. This time, however, there’s some room for us too. 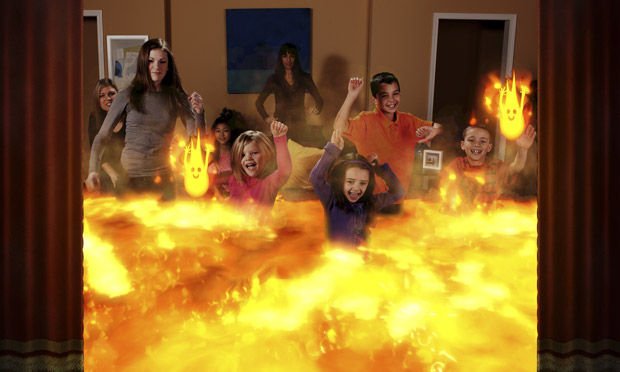 Double Fine Happy Action Theater has more in common with an augmented-reality playground than what many of you would likely define as a strict “game.” It’s made up of 18 activities, which range from lava you can roll around in (YES!) to a Breakout-style level to a black-and-white scene that could be straight out of Godzilla.

What first grabbed my attention was that you’re launched straight into the action. By default, “Director Mode” is on, meaning the on-screen activities are cycled through automatically every so often. In other words, parents can totally start the game up and let their children go wild without assistance.

Should you have a specific activity in mind, you can either press the start button on a controller or do the standard left-arm-out pose to land on an interactive level-select menu. While in an activity, you can also use a controller to manually skip to the next one. As far as navigation is concerned, they nailed it. It’s both intuitive and unobtrusive. 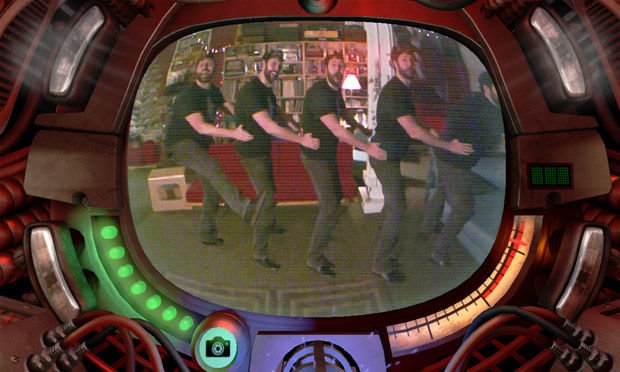 As tends to be the case with games that bundle together many self-contained experiences, some are far better than others. Though a few of the activities in Happy Action Theater tread over similar ground — throwing seeds for pigeons and planting flowers is essentially executed in the same way, for example — there’s more good than bad here.

My personal favorites are the aforementioned lava sequence, a disco club where your body is distorted and hops about sporadically, and the silly thing pictured above. In it, your photo gets taken, then you’re allowed to move to a different position (while your clone remains stationary) and more photos ensue. Some dude is going to use this to hug himself and make a “forever alone” joke, just wait.

Even the less enjoyable activities are still entertaining. For instance, one of them puts you inside of a jelly dessert. That’s it! You wiggle around and laugh about the insanity unfolding on your television. Replay value is definitely a valid concern — less so for younger kids. I wouldn’t go in expecting to get more than a few hours of fun out of this, personally. 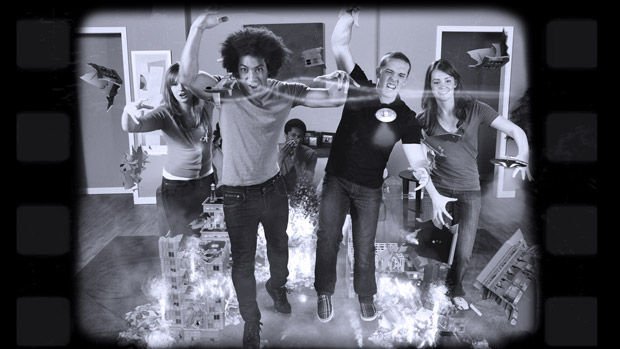 The fact that up to six players can join in with practically no barriers to entry outside of turning on the Xbox 360 and booting the game up shows who the target audience is here.

None of the activities are particularly inventive, but I also wouldn’t go so far to say they’re boring, either. Enough of them are interesting that you probably won’t regret buying Happy Action Theater for yourself. On the other hand, it should prove to be sufficiently engaging for kids (and kid-like adults, particularly when alcohol is in the room).