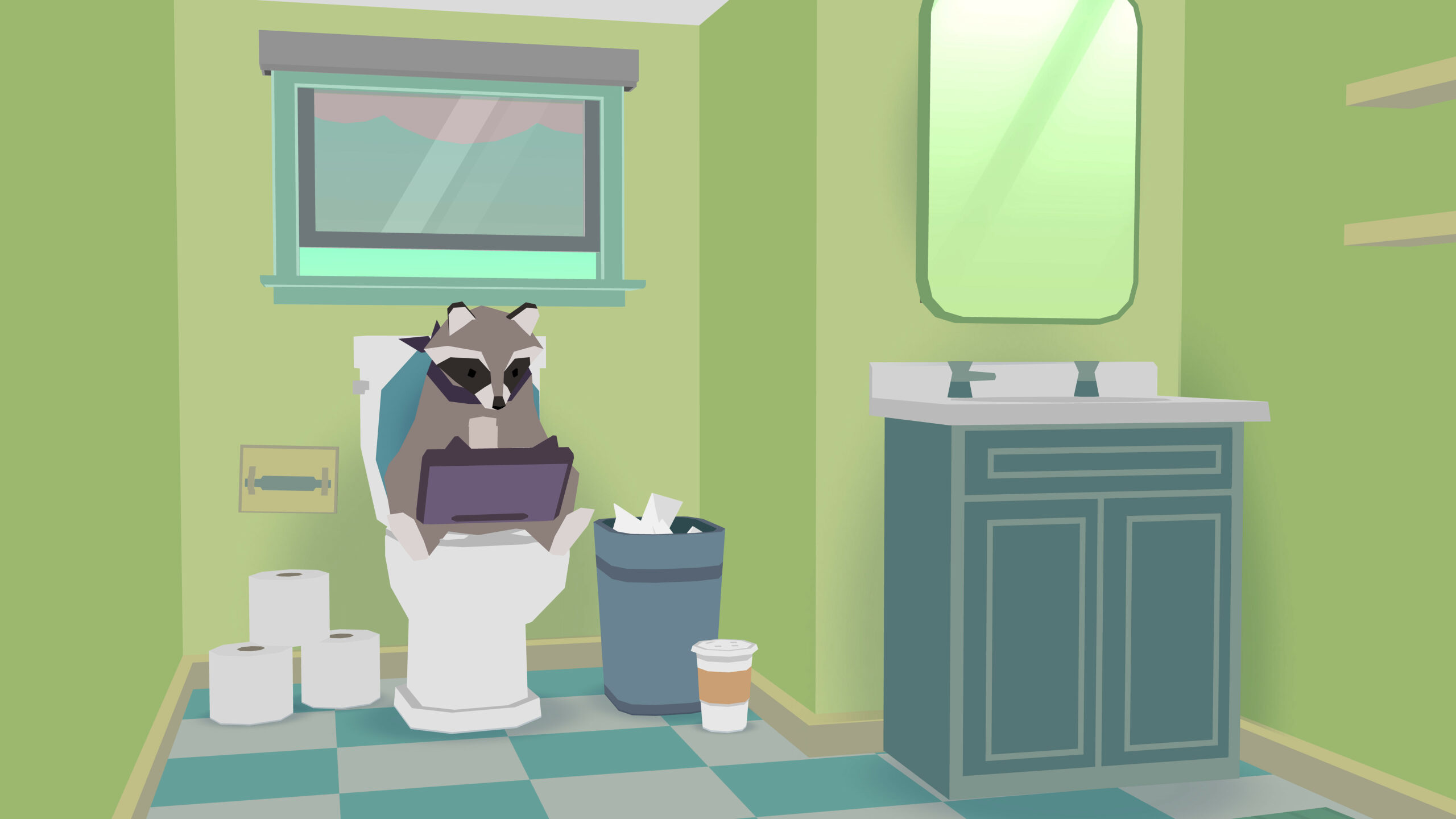 Holes get a bad rap. Their existence signifies an absence; the appearance of a hole means something can never be whole. Losing a loved one leaves a hole in our heart. Perceived gaps in storytelling are called “plot holes”. Places that people despise are unceremoniously dubbed “hellholes”. In Donut County, an ever-growing hole wreaks havoc on a small town. But despite its negative connotation, there’s a charming heart at the bottom of Donut County‘s hole. Like the fried confection that shares its name, Donut County is a treat. It’s delightful, endearing, and consumed all too quickly. 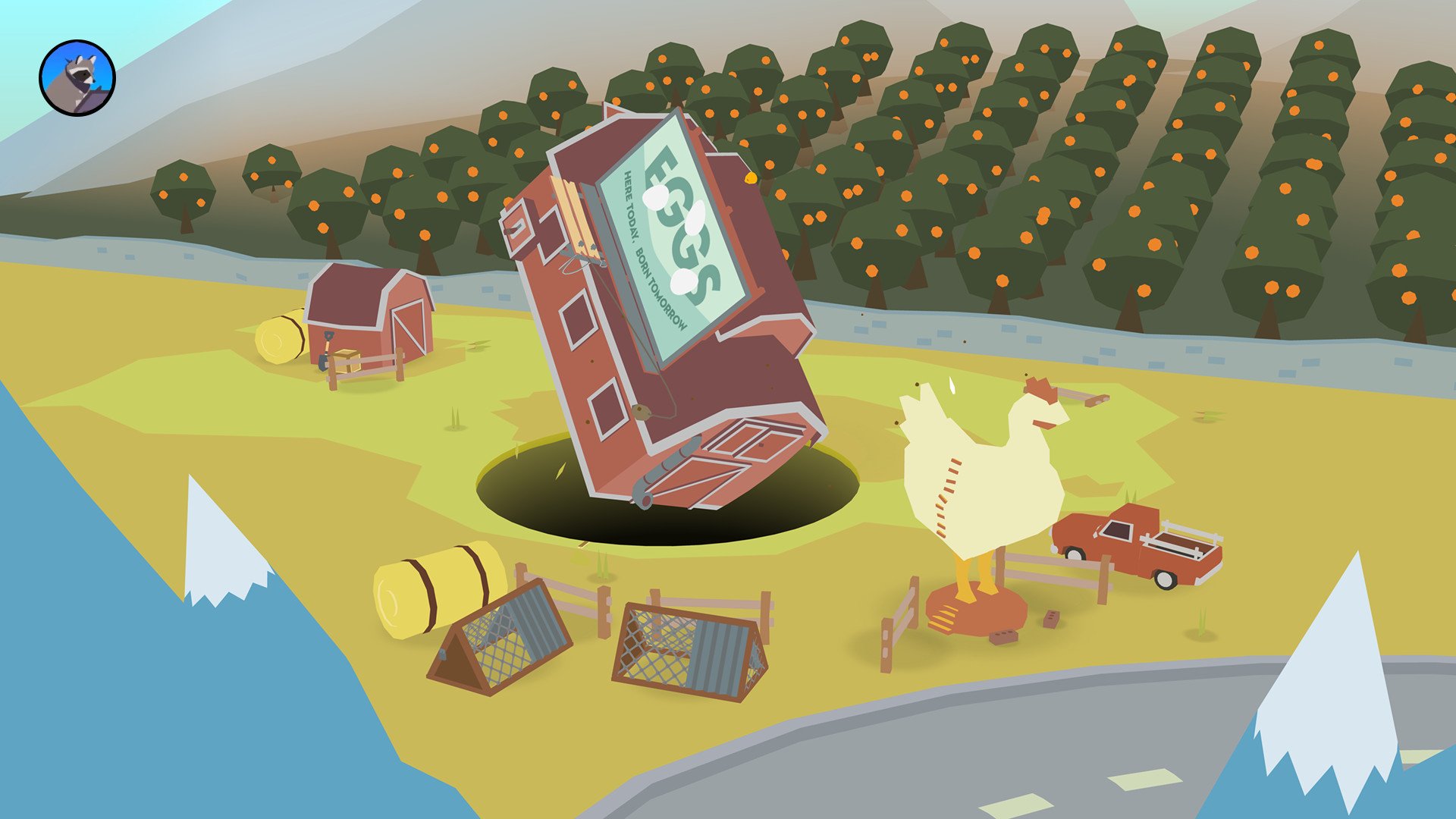 Donut County doesn’t ask much from players. It’s a decidedly lean game about guiding a sinkhole around a series of beautifully detailed low-poly environments. The hole grows by consuming objects. Across the game’s levels, the hole expands from a nearly innocuous divot to a cavernous opening, capable of swallowing up vehicles, buildings, and rock formations with ease. Players control the hole, essentially guiding it on a trash-induced feeding frenzy. Think of it like Katamari Damacy played in reverse. Instead of rolling objects into a gigantic ball, Donut County tasks you with pulling trash towards the earth’s (hollow) center.

Donut County isn’t the most complex game ever made, but it’s undoubtedly one of the most charming. You see, by the time players take control of the hole, most of the town’s residents have already fallen through the pit. Each level functions as a character’s retelling of their fateful encounter. As the game’s anthropomorphic critters sit at the center of the earth, sharing their last few minutes on the surface, Donut County takes form as a digital campfire story punctuated by goofy writing and humorous situations. Every character’s vignette occurs in an impeccably detailed diorama stuffed with objects that are practically begging to get sucked into the hole.

There’s something immensely satisfying about Donut County‘s physics-based gameplay. Guiding the hole around environments is simple enough — on PC you just drag your mouse — but it always feels rewarding. Upending picnic tables and wiggling the hole around until the table and its contents drop into the cavern is a specific kind of entertainment. It’s equal parts chaotic cleaning and obsessive organization, thanks to the game’s light puzzle-solving elements.

After a few stages, Donut County iterates upon its simple format by introducing a catapult upgrade. Once unlocked, players gain the ability to launch specific objects back out of the hole. Doing so allows for the stages to start incorporating puzzles. The puzzles are never taxing, but they do show remarkable creativity from developer Ben Esposito. Donut County succeeds because it gives players a series of silly challenges instead of a handful of brainteasers. Donut County asks players just to enjoy the scenery and suck up some junk. It’s cathartic, really.

But for as entertaining as Donut County is, it’s likely to leave you wanting more. It just goes by too fast. Donut County is an exercise in sublime game design that feels just a beat or two too short. By the time credits roll, you’ll want more. Although it’s clearly a complete and polished product, Donut County would be better if it was a tad longer, if only because it’s so damn fun to play.

Donut County is as charming and funny as it is inventive and beautiful. It excels at what it sets out to do –there’s never been a better hole simulator in video game history. But underneath its colorful scenery and intuitive gameplay is an experience that feels like its inches away from true greatness.