A little help from my friends

A rocket flies towards a tiny meteor, and a robot and sentient balloon are delivered to its surface. The rocket flies off. A young girl is crying uncontrollably. Several decades later, a friendly alien flies by and notifies the robot that it needs to prove its humanity or its entire race will be scrapped.

This is Doki-Doki Universe. 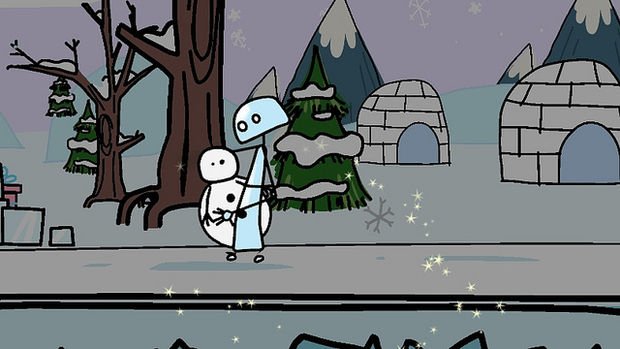 Describing Doki-Doki is rather difficult. At its core it’s essentially an adventure game. You hop from planet to planet solving problems and gathering new items to…well…solve more problems. But calling it a “traditional” adventure title is a bit of a misnomer, as the actual puzzles are much less complicated than your typical genre staples.

As the robot QT3 you’ll travel around and learn as much as possible about what it means to be human, at the behest of “Alien Jeff” — an extra-terrestrial that has given you an ultimatum on behalf of your entire robot race. Almost immediately you’ll gain access to an inter-galactic steed (a choice between a host of animals, and even fine cheeses and burgers), and you’re given free reign of the galaxy at will.

Most of Doki-Doki involves flying around to different locales, finding quests, and helping out adorable creatures and humans. You’ll learn their likes and dislikes, use items you earn throughout the game to please them, and greet them with waves, bows, and kisses to earn their trust. A typical puzzle will involve a creature wanting a “beautiful” object to remind them of their time on a tropical island — so you’d conjure up a dolphin bubble to meet the “island” and “beautiful” requirements. It’s not rocket science, but a few of them are head-scratchers which will force you to go to different planets to acquire more items. They’re also disgustingly cute. 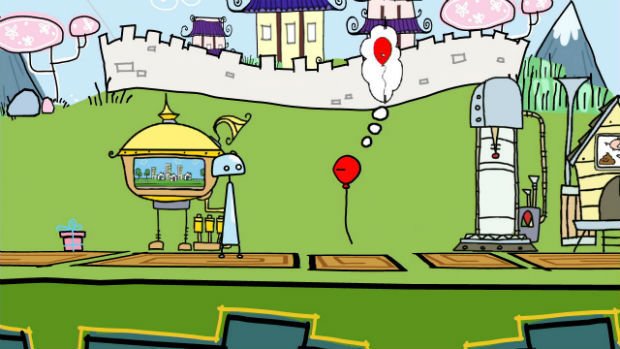 All of this goes towards unlocking the total quest requirement to complete the game, as well as the general collection of presents — more items that allow you to solve even more problems. The vast majority of citizen’s gifts can be earned by way of their heart and friendly actions, while others need to be coerced through violence (complete with the ability to pick them up and throw them), and forcing them to deal with their dislikes. Thankfully gifts are mostly optional, as you can get by on the bare minimum without beating up on your friends.

Most of the stories in Doki-Doki range from “weird” to “batshit insane.” I’m talking plotlines involving misunderstood sea monsters, planets where humans are the pets of capybaras, and an African plane that hosts a trickster Leprechaun. Every time you visit a new area, odds are you’ll see something completely new and exciting — even if the gameplay never really changes the entire time. Despite this relatively shallow and simple mechanic, it’s the comedic element of the game I enjoyed time and time again, as Doki-Doki earned more “awwws” from myself and my audience more than practically any other title in recent memory.

In addition to these adventure-like elements, you’ll be taking a ton of personality tests throughout the game. These aren’t scientific in any way, and are more-so comedic intermissions, asking you oddball questions like: “Which would freak you out more, a man in a bunny suit, an anthropomorphic carrot, or an actual rabbit?” All of these are accompanied by the wonderful art style from the game, and there’s a laugh at nearly every turn. Roughly half of the game is spent answering these questions (which usually go something like this), and almost the entire time I had a smile on my face. 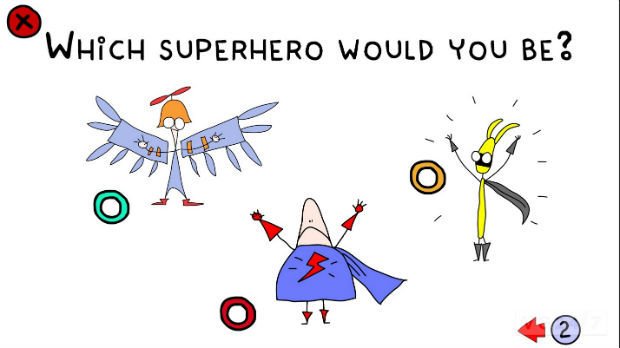 Let me say that again — almost half of the game is taking tests. If the idea of spending tons of time in text-based menus scares you off, maybe Doki-Doki isn’t for you. Once you’re done with every test and every quest, you’ll access the final planet that wraps up the story and have the opportunity to go for every collectible in the game. Doing everything should take you roughly five hours of play.

It should be noted that there is some DLC involved beyond the core narrative. Although you don’t need it to be “beat” the game and conclude the story, there are six add-on planets available to purchase, and a number of extra personality tests. None of it is what I’d consider essential to the core experience, but it’s still a bummer that something was locked out of such an endearing package as this. To help alleviate the blow, the game is Cross-Buy across the PS3, PS4 and Vita — so one purchase will net you all three versions.

Doki-Doki Universe is a very odd, very cute, and very simple game. There isn’t a whole lot to it, so don’t go in expecting a deep and rewarding adventure title. So long as you don’t mind spending an afternoon helping a tiny snowman bond with his father, Doki-Doki will be more than adequate.