Less finite than the first

Disney Infinity was quite the ambitious project, but it fell flat in a few key areas. This was mostly due to a lack of even game worlds, with a few of the universes overshadowing others that felt more rushed. The other aspect of the game that didn’t fully deliver was the Toy Box mode — a take on LittleBigPlanet‘s “create your own” levels mechanic.

With Disney Infinity 2.0, Avalanche Software is poised to rectify both of those issues, combined with free reign of the Marvel license. While 2.0 is still primarily targeted towards the younger audience, the overall package is much more enticing the second time around. 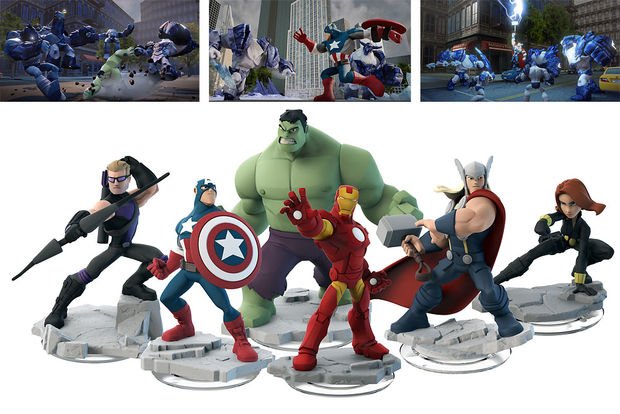 Since the toy-game market can be confusing as hell these days, here’s exactly what you get in the Starter Kit. For $74.99, you’ll net three figures — Thor, Iron Man, and Black Widow — as well as the Avengers Play Set world, the USB base, and two pre-made Toy Box levels. That’s what I’ll be covering here in the review — extra Play Sets and characters will be covered individually.

You’ll immediately notice that 2.0 comes with two less Play Sets than the original game (just Avengers) — which was bundled with Monsters Inc., Pirates of the Caribbean, and The Incredibles. At first glance, it’s pretty disappointing. But what Avalanche Software has done is flesh out the Play Sets in general so that the included Avengers area is now comparable in size to multiple stories in the first game. Not only that, but the two aforementioned Toy Box levels are basically mini-stories themselves, involving special types of gameplay like tower defense — and they can be played with any character.

Despite the fact that it shipped with three Play Sets, one of the chief complaints about the first game was how limited it felt. Not only could certain characters not play in certain Play Sets, but there weren’t enough real Toy Box adventures outside of player creations — some of which weren’t really up to par. Disney Infinity 2.0 addresses both of these somewhat with collectible “crossover coins” (letting Iron Man crossover into Spider-Man’s world, for instance), and a better Toy Box.

Let’s start with the main attraction, though: the Avengers story. Right from the start it feels like an authentic cartoony experience based off the film series, which is a good thing. The Avengers tower is already built and established, SHIELD is out and about, and any applicable character is a part of the campaign’s cutscenes, whether you have the toy or not (Iron Man, Thor, Black Widow, Captain America, Hawkeye, and Hulk). Cross-over characters like Nova and Rocket Raccoon are also incorporated and playable if you own them.

The concept is based off the best set from the original — The Incredibles. You’ll basically have a “city in peril” situation to deal with, with Loki and MODOK at the forefront. The voice cast is full of people who have worked in animation, comic-book adaptions, or the videogame industry (Troy Baker does both Loki and Hawkeye), and they do a great job of performing the characters in Marvel Super Heroes. Samuel L. Jackson is a big get, and most of the Avengers are voiced by actors who play them in the Ultimate Spider-Man series. Nothing feels phoned in.

Missions however aren’t as lively, and are generally comprised of typical sandbox fare, like “protect this asset,” “go to this location and kill these enemies,” or “pursue this enemy.” There’s a decent amount of variation, but odds are at the end of every activity, you’ll have to kill something. The game also doesn’t look particularly stunning even on the PS4, and beyond the draw distance, it doesn’t even feel like a real upgrade. There are a few dungeon-like sections to round out these missions, which usually have a fun boss battle or series of puzzles in tow. 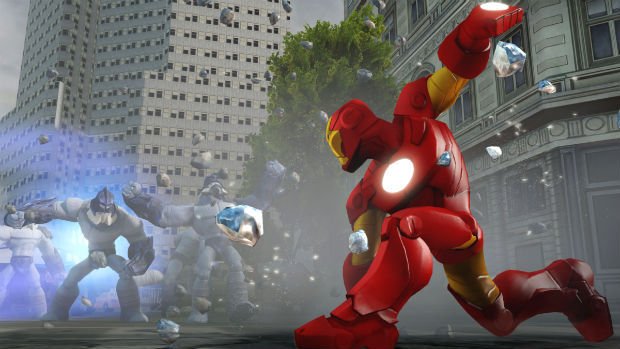 Now, this is a game aimed at the younger audience mind you, so there isn’t going to be anything mind-blowing in terms of plot nor is the base game particularly difficult, but there are a few concessions now with the new iteration for older players. Most notably, there’s an additional difficulty level that can jack things up a bit, and if your character dies in combat, they have to be revived by a teammate, lest you restart at a checkpoint or put a new character in. It’s not exactly punishing, but there’s more at stake than the original game that had infinite respawns.

But while missions may not stray from genre-conventions, Avalanche really nailed how each character plays. Iron Man is particularly impressive, as his animations and abilities directly mirror how you’d expect him to look in a game. Every Repulsor Blast and rocket sound effect is perfect, and every Marvel character feels like a big upgrade gameplay-wise over the Disney and Pixar cast in the first game.

Skill-trees are in, which ups replay value considerably and helps differentiate the cast even further. Leveling up in the last game provided no major value to the toy in question, but the cap has been extended 10 levels to 20 here, and now skills can add extra things like super abilities, extra flight time, or new attacks. Hand-in-hand with the increased replay value, the Toy Box portion has been upgraded significantly.

With the starter kit, you’ll net “Escape from the Kyln” from the Guardians of the Galaxy universe, a Gauntlet-like top-down action romp with RPG elements, and “Assault on Asgard,” a tower defense minigame. Like the Avengers story, both of these aren’t the deepest experiences, but the big plus is that any character can be used in them — even toys from 1.0. This solves a big problem I had with the first game in that “Toy Box-only” toys originally felt like half their gameplay was missing — but now, you should get a lot of play with any figure. The included two minigames are a decent start, but I hope that Avalanche develops more gametypes in the coming months beyond the pair it has already announced.

The level-building process is also improved, if you’re one of those creative types. Now, you can access a news feed of information highlighting the top levels available (fan-made or created by developers). You’ll also get a lot more storage for your creations, as well as an expanded favorite sorting system and a vote mechanic — all of this makes it easier to find better content instead of sifting through everything there is to offer.

Making levels is easier too, with new template options and more objects to choose from. In fact, pretty much the entire first game’s object list is included on top of all the new items. There’s also a create-your-own-house section where you can customize a living space for your characters. 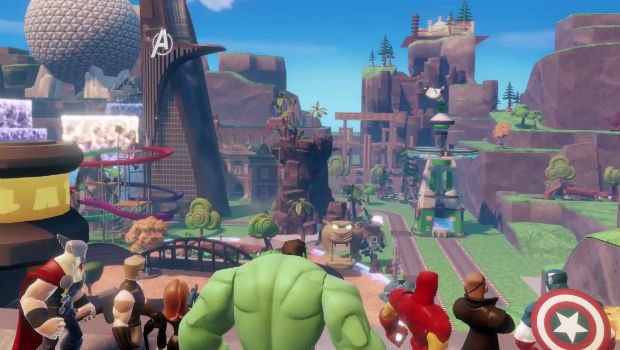 Disney Infinity: Marvel Super Heroes is still aimed at the younger crowd, but the new Toy Box and attention to detail will speak to audiences of all ages. With stronger writing and even deeper gameplay options, the third game could really have universal appeal beyond the audience it already reaches. 2.0 feels like a natural evolution, and that’s a good thing if you liked the original.