The DiRT series is well-known for its Rally-style racing, accurate and realistic physics, and bare-knuckle driving action. Spawned from the Colin McCrae series of Rally games, DiRT took off on next-gen consoles for fans looking for something a little different than the regular slew of gearhead and arcade racing games available on the market.

This is not your father’s DiRT game. 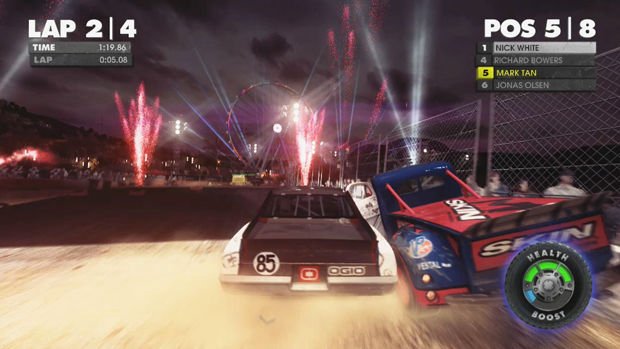 For fans out there looking for DiRT 4, this simply isn’t it. In fact, this title bares absolutely no resemblance to the games in the series’ past. Gone is the Rally career mode, dirt tracks, and racing career. Sadly, gone also are the realistic car physics as well. When you’re able to do donuts by simply laying on the accelerator — “Look, mom, no hands on the analog stick!” — you know you’re in for some floaty car behavior.

So what is left? Well, from jump, DiRT Showdown is actually more of a destruction derby title, with occasional Gymkhana events thrown in. There are traditional races too, but honestly they’re peppered throughout with the focus on wrecking other cars in derby or figure-8 races being the main focus. This is further hampered by not only the car physics being so off kilter, but also by the cars themselves.

The majority of the vehicles are all non-licensed generic cars that, for the most part, handle and accelerate the same. There’s no real “tuning” involved, but you can upgrade your cars’ performance with money earned in events — though, to be frank, even after doing so, I only noticed a small change in acceleration or handling. 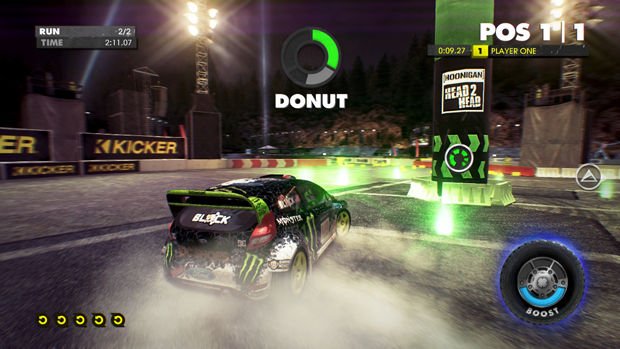 At least everything looks nice. The floating sponges you’ll be driving all appear sleek and sharp, with excellent particle effects as you hurtle over jumps, boosting with your constantly renewing nitrous meter. Damage effects are especially nice as you lose doors, fenders, and more smashing about each course.

The menus are also sleek, but the constant “Look how extreme we are!” feel of every menu option falling from the sky as a giant metal block gets old after three or four screens. The same can be said of the unavoidable announcer, who spouts off such gems as “T-bone-arama!” as cars slam into each other.

The Gymkhana events have a separate challenge mode, where players are tasked with increasingly difficult moves, such as drifting under scaffolding, clearing jumps, performing donuts, and the like. However, the word “challenge” is used loosely here, as once again the bizarre physics allow you to unintentionally complete these moves before you’ve realized what you’ve done. 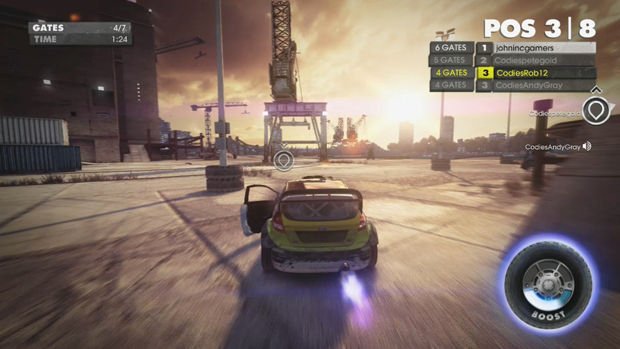 There is an online mode, which the developers would have you think is the main meat-and-potatoes of the title, but sadly, this seems slightly broken as well. The RaceNet matchmaking servers don’t allow for much customization or choice over who you compete against or how you want to race, and the load and wait times are excruciating. Even once you finally get into a match, you can’t select what you want to play — you just keep downvoting what appears until hopefully you land on an event you want to actually play.

It’s like the developers only made this title to keep the license alive while they worked on the next “real” iteration of the series. DiRT Showdown is not a broken game; it’s just very slap-dash, seemingly thrown together from pieces of ideas but never made fully whole. Courses repeat over and over and the difficulty never gets too high where events become a challenge, thus leaving the player almost bored with the task of completing each event. It looks nice, but it’s clearly a shell of its former self, with no real connections to the series that everyone knows past the name itself.