What if you already are?

Sony seems to have a thing for storybook adventure games. They hosted Until Dawn in 2015, and have been steadily supporting Quantic Dream for the past eight years with PlayStation exclusivity for Heavy Rain and Beyond: Two Souls.

Like everything Quantic Dream has ever made, that latter pair was met with a polarizing response, and Detroit: Become Human is poised to be more of the same. 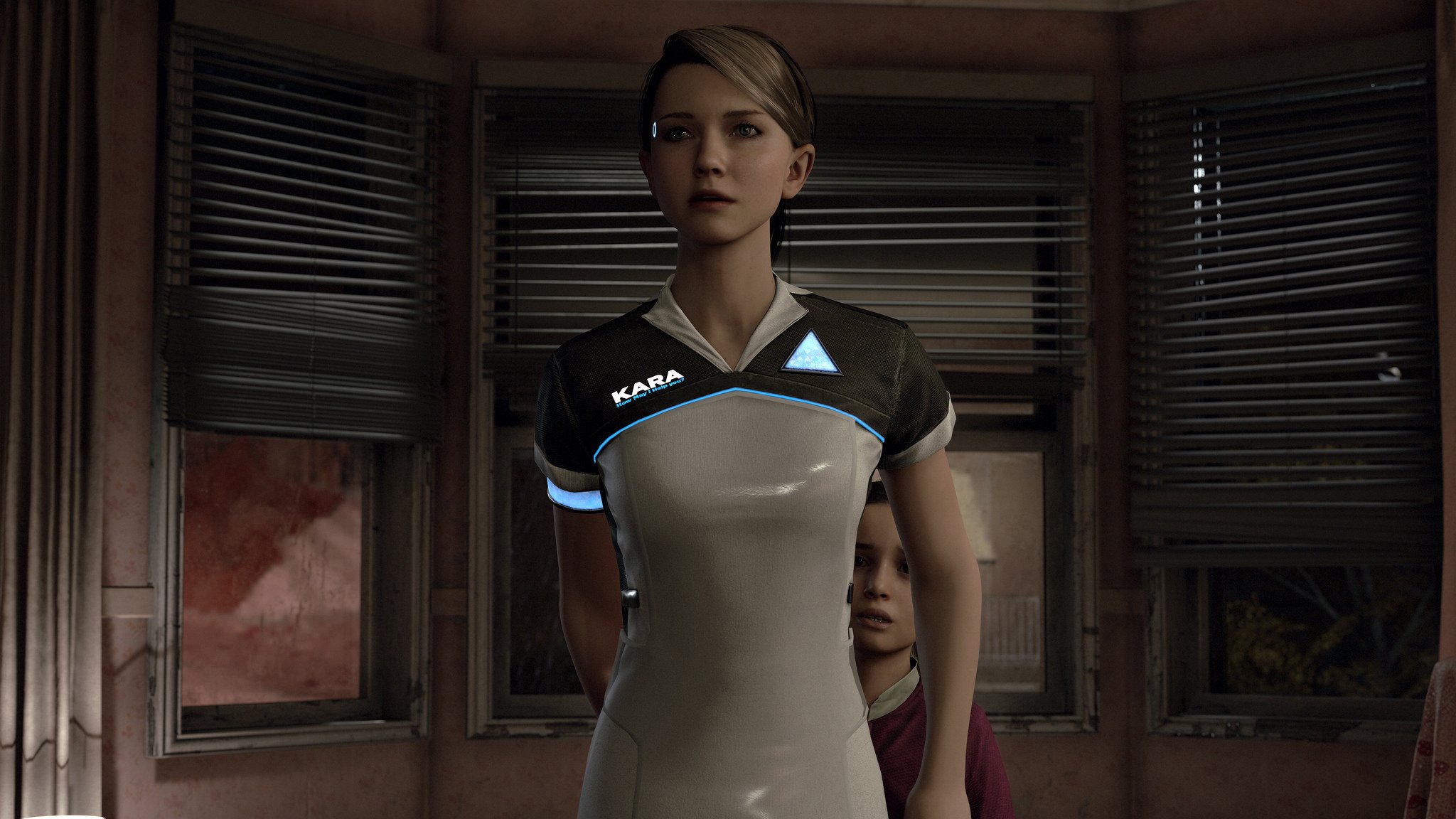 Detroit explores one of my favorite philosophical conundrums — if you mold an artificial lifeform into the various parameters most people would consider human, does it have a soul? It’s one step away from “do animals go to heaven,” but I find the question fascinating, especially when it’s backed up by decades of wondrous literature and recent contributions, such as the Channel 4 UK series HUM∀NS.

Yet, a lot of what Detroit offers is surface level exploration of this concept. David Cage, the game’s director, is not a subtle man. Throughout the entire adventure the idea that androids are second class citizens smacks you across the face like a rolled up newspaper. In the first 10 seconds a presumed human is shouting at your player character “why didn’t they send a real human?” belittling your stature as law enforcement, a not at all hidden authoritarian dig that isn’t the last. You should also brace yourself for a few quotes directly from t-shirt slogans or historical movements.

I really wish Quantic Dream didn’t always have to shove in a detective angle (Connor literally kneeling down, looking at blood, then tasting it to initiate a specimen protocol elicited an audible chuckle as I imagined the intro to CSI — there’s even an “I’m too old for this” Harvey Bullock-esque partner and a no-nonsense Captain!), but it’s handled better here compared to their previous efforts. Connor’s calm demeanor and android origin is an interesting way to frame the investigations, and subsequently allows for the largest array of choices.

Detroit is actually the story of three people: Connor, the aforementioned cop, Kara, a housekeeper model android, and Markus, another robot who is a caregiver. You can sniff out the theme almost immediately: service. All three are put in a lesser position than their superiors, and are constantly dogged throughout. The catalyst behind the meta-narrative involves the sci-fi trope of the “android glitch,” (called deviance) which causes man’s creation to become sentient. Free will, facilitated by you, the player, is the crux of Detroit‘s entire soul.

Given what Detroit is trying to accomplish, I’d say I bought in halfway by the time the credits rolled. The setting is not only believable but captivating, and the gentle use of blue hues were soothing, but authoritative in their attempt to carve out an identity. The game nails it in the smaller moments, such as the childlike innocence of a girl calling a manufactured robot companion “a friend,” before it has a chance to learn human behavior such as jealousy and loss and truly become free.

These sort of things make Detroit Quantic Dream’s strongest world to date. Watching someone throw trash at a street-cleaning android while walking is something that takes seconds to witness (and you may not even experience it), but gets its point across more than the major heavy-handed moments; of which there are many (yep, there’s even a “they took our jobs” movement). There’s a decent amount of world-building too, conveyed through watching ancillary activities like television or just looking around at the environment. Androids also convey emotions to the player through on-screen text, which allows for rapid-fire intense situations that feel unique to Detroit. The mood is nearly always unsettling.

In terms of its three narratives Kara’s story is the weakest, curbed by its flimsy opening. That’s through no fault of actor Valorie Curry; but the script. Tackling domestic and substance abuse just isn’t something Quantic Dream has the finesse to take on, especially when it’s coupled by a cartoonish representation of their offenders. Oh, there’s also a girl named Alice who reads and reflects portions of Alice in Wonderland. Like I said, not so subtle.

Markus on the other hand gets to take care of an artist straight out of Lifestyles of the Rich and Famous (he’s not complainin’). His tale, while occasionally as melodramatic as the rest, is a little more heartwarming as he’s constantly told how much potential he has by his owner, played to aplomb by famed film and voice actor Lance Henriksen. When he’s pushed to his limit you feel for him more, as his baseline and his backstory is less of a caricature compared to Connor or Kara respectively.

Detroit is meant to be replayed, but like many adventure games the threads mostly lead to the same outcome, with a few exceptions for particularly riveting scenes, especially near the end. By examining an entire setting you’ll uncover “beneficial” unlocks, like more potential dialogue options that could sway a situation in your favor. Quantic Dream can get away with occasional moments of wooden acting and uncanny valley visuals because it’s a story that focuses on entities who aren’t technically human, but even then it can grate. The more open environments can also feel like a tease, as smoke and mirror “no androids allowed” signs frequently curb exploration and keep you on a more beaten pointed path. I also encountered one glitch — an NPC wouldn’t let me pass and trapped me in a room. After a quick checkpoint cycle I was back in and only lost 30 seconds of progress. 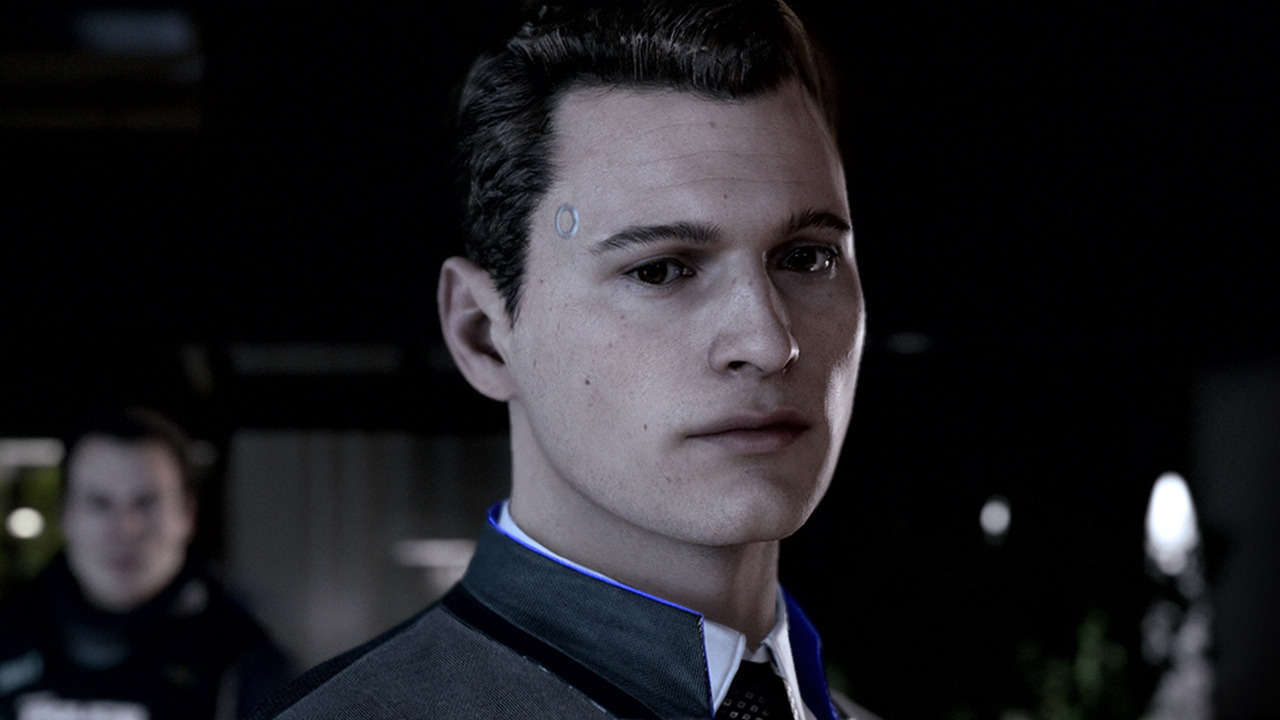 Conversely, with the android motif it can also justify more gamey elements like a “chance of success” meter because these lifeforms have certain advantages that others don’t, providing a loose justification for a built-in Batman HUD. Plus, during certain key moments, Detroit does sufficiently entice players to try scenarios again to see how different they can become, especially the ones that rapidly swap points of view and playable characters.

You’ll accomplish various tasks in the narrative through walking and talking, interacting (which includes an Arkham style “reconstruction” system using your android vision), and most importantly: choosing dialogue and courses of action. Without spoiling any particular events you might have the option to talk you way out of a jam or force your way out of it, sometimes with the use of items or insight you’ve acquired previously.

As an adventure game Detroit is more than competent, though it does awkwardly force in some relics of the past like analog stick rolling to interact with objects or motion-centric controller swinging. Having to navigate a deadzoned controller wobble to turn on a flashlight is a headache (I counted five times where I needed to pause the game to re-orient or reset my controller), and because you were no doubt wondering — yes, Detroit does feature sparing QTEs, some of which use the aforementioned wonky motion (remember Sixaxis?). It balances these grating mechanics with clever DualShock 4 Touchpad swiping with in-universe tablets and such. The annoyances that Detroit has feel old fashioned, but aren’t a complete dealbreaker.

Detroit: Become Human, like most Quantic Dream games, is filled with muddled symbolism and a spark of hope amidst its most interesting universe yet. It doesn’t have anything particular new to say, but it delivers in terms of drama, to the point where I started a second playthrough shortly after my first seven hour-ish run. It’s flawed, but coherent, which is an upgrade.