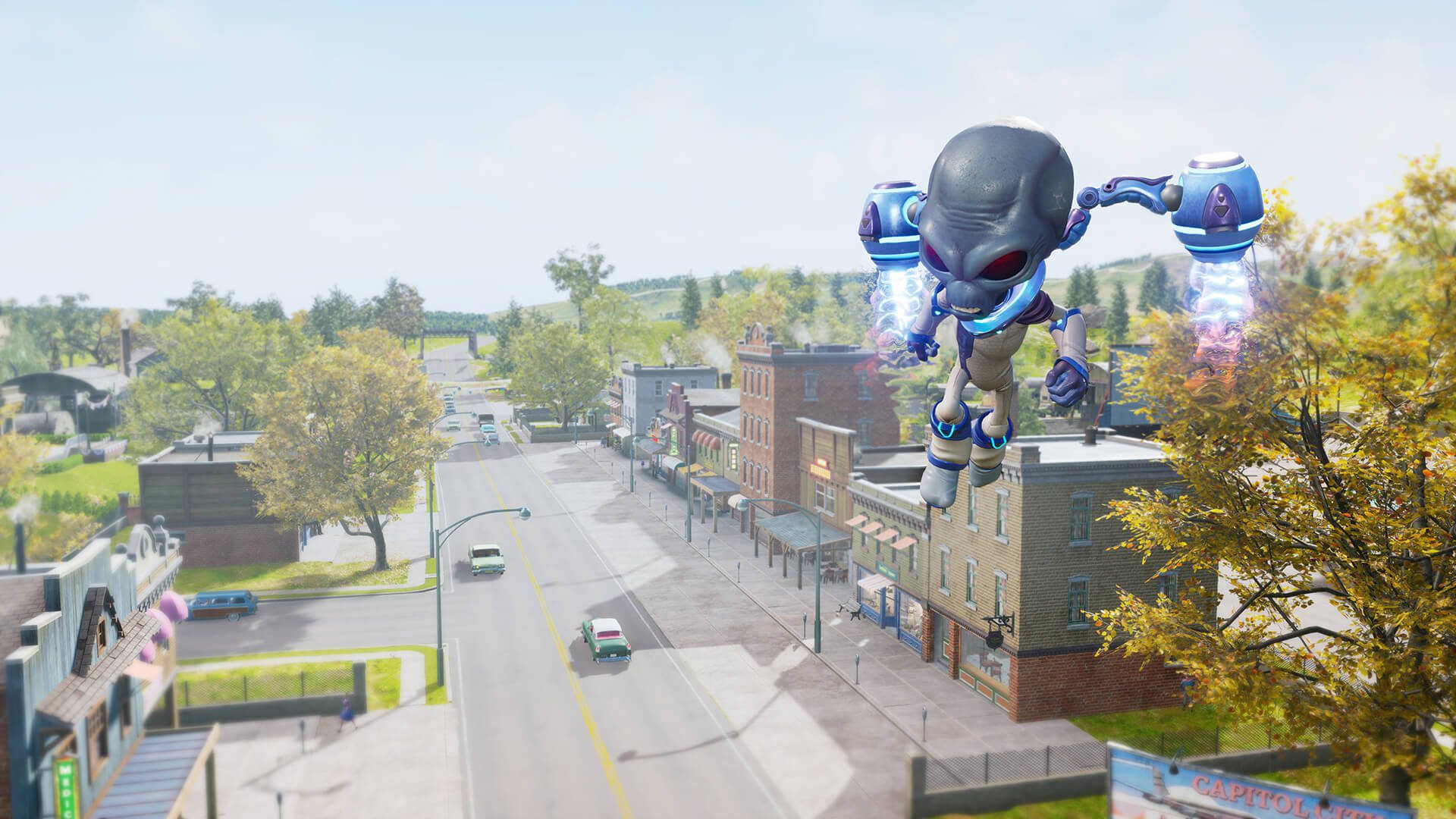 We all know conspiracies are dumb

Destroy All Humans is the kind of game that’s a perfect subject for getting the remake treatment. Originally released in 2005 by the now-defunct Pandemic Studios (I’ll never forget the controversy around The Saboteur‘s launch DLC that enabled nudity), Destroy All Humans is spirited but doesn’t hold up to modern gameplay conventions. Go watch some YouTube videos. It hasn’t aged gracefully.

Developer Black Forest Games has tackled a beat-by-beat remake 15 years later. It’s extremely competent, and every bit as lively and spunky as the original. This just feels like a franchise that means a lot to some people. Still, we’re left wishing more creative liberty had been taken.

Rarely does a video game get its intention so upfront in the title. Destroy All Humans is really only focused on destroying all humans. After Crypto-136 is killed and taken by the US government for research, Crypto-137 makes it his personal mission to avenge his brethren’s death. If an eye for an eye makes the whole world blind, Crypto-137 is aiming for intergalactic vision loss.

Eventually the story twists into something even more nefarious, as shadow agency Majestic vies for control of America and tries to cover-up and eliminate the alien threat. There are layers to the conspiracy theory, as the propaganda machine blames the Communists. Jingoism and McCarthyism run rampant in Destroy All Humans, and Pandemic did a great job putting a humorous spin on schlocky ’50s sci-fi.

The combat — and there is a lot of it — wears thin before long. It’s extremely arcade-like in the way that Crypto keeps blastin’ and the waves of enemies keep comin’. There are dizzying numbers of policemen, military dudes, and Majestic agents attacking at any given time, and Crypto’s weaponry is meant to cut right through them. It’s a dance that you repeat a whole lot before Destroy All Humans‘ credits roll.

There’s some modernization in the remake that makes all the repetitive slaughter more appetizing. Most importantly, Black Forest did a good job reimagining the level design across the game’s six stages. Everything is a lot denser and more lively, and it all makes the scale of the destruction seem more important. Also, the remake introduces multitasking so that Crytpo can shoot, use telekinesis powers, and suck out enemy brains all at the same time. It’s so efficient.

This is all supplemented with some higher-level carnage — literally. Crypto can also take to his UFO and rain death beams and quantum deconstructor thermo-nuclear clouds down upon the populace. Destroy All Humans admirably splits its time up between on-foot and flying combat, but the flying stuff doesn’t really have legs. It’s too easy to pose any real challenge, even with all the anti-aircraft missiles being shot your way.

The most interesting mechanic pops up surprisingly often. Crypto has the ability to disguise himself as a “Holoblob,” taking the appearance of a human (assuming no one saw him shapeshift). Weaving through crowds, reading people’s thoughts to keep up the disguise, dodging Holoblob jamming devices — it almost feels like a perverted spin on Assassin’s Creed‘s social blending in a way. In a game where you’re constantly the aggressor, Destroy All Humans takes ample time to focus on cloaking and playing it cool. It’s weirdly antithetical but undeniably one of the most compelling systems.

Although Black Forest did a lot to revamp how Destroy All Humans plays — some things we haven’t mentioned yet: A much deeper upgrade tree, optional objectives in each mission, a “transmogrify” ability for turning objects into ammo, and four distinct challenge events in each stage — the developer never left its mark on the moment-to-moment. Every mission plays out the same as the original. They’re very short, very easy, and very forgettable. (Save for the final boss fight which, judging by an old grainy video I watched, is about 10 times harder this time ’round.) There’s rarely an in-mission plot beat that grabs your attention.

It would’ve been nice to see Black Forest stretch its legs and really put its stamp on this project. Instead, it’s kind of left feeling like a super ambitious remaster rather than a true remake. I know, I know — there are a lot of semantics between those two terms. But the foundation was already laid. It’s too bad the developer got to put that much into modernizing so many other aspects, but stopped short of playing with the game structure. Destroy All Humans is simultaneously very new and very old as a result.

Crypto-137 is hellbent on ensuring that humanity meets a terrible fate. By comparison, Destroy All Humans has met an enjoyable-enough-but-certainly-not-amazing fate. That’s fine, but it’s tough to not feel as though something truly great could’ve happened with some more creative license. If nothing else, this remake left me thinking that Destroy All Humans is still a viable property and that a brand new game might not be such a bad idea. But maybe that’s because an extraterrestrial has control of my cortex.