In this world nothing can be said to be certain…

It seems the most important shared experience of our lives is the one we know nothing about. None of us know, definitively, what happens after death. Certainly, many of us have our beliefs — an afterlife, reincarnation, total oblivion, our souls harvested by an eldritch god to fuel their resurrection — but no one has crossed the threshold of mortality to tell us what goes on after our hearts beat their last.

To some, this is chilling, to others, it’s comforting. Some fear it, some revere it, some dwell on it, and others ignore it. Views on death are as individual as we are, and its mysteries may never be solved.

So put that out of your mind and get back to work! 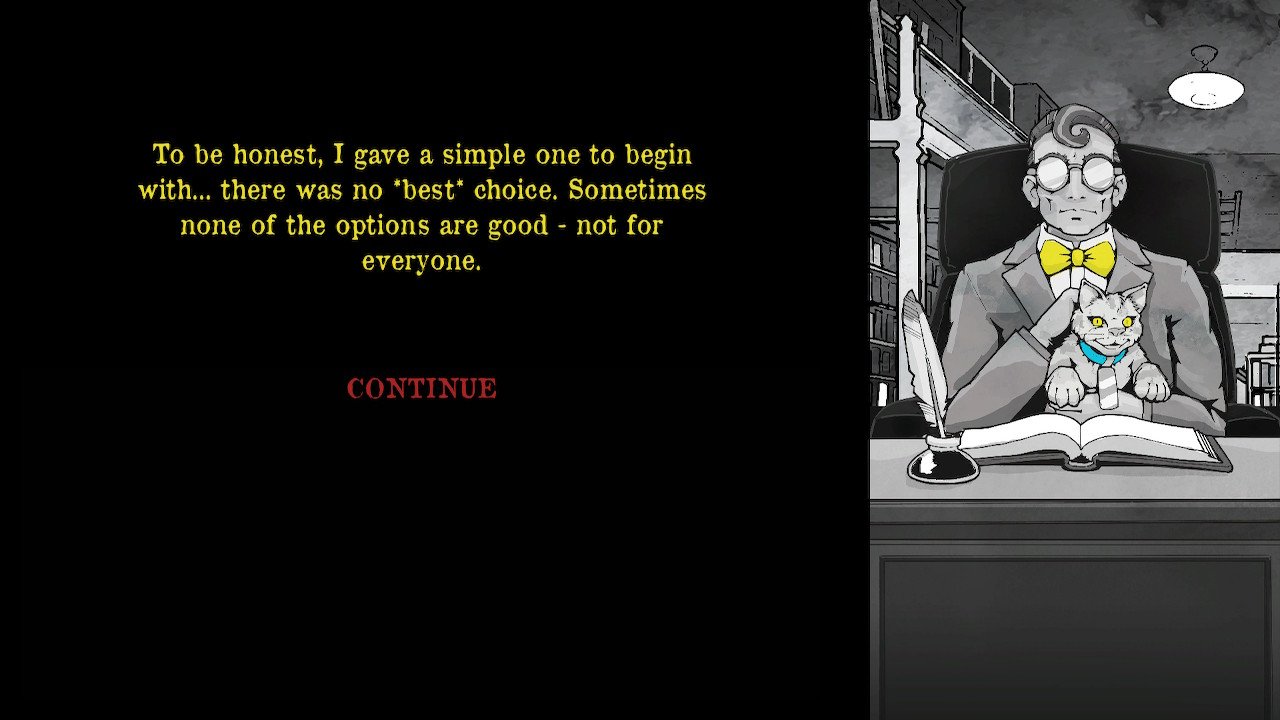 My empathy is too overactive for me to have really enjoyed Papers, Please. The deskwork was satisfying, but when I had to choose the fates of the human characters approaching my checkpoint, my family, and myself, it became too much of a weight to carry. An effective game, have no doubt.

With that memory rattling around in my skull, it’s a wonder why I chose to approach Death and Taxes. It’s a bureaucracy simulator, taking an obvious cue from Papers, Please, but also mixing in some of the quicker decision making of Reigns. You play as a grim reaper going about their job, deciding the fate of mortals by means of paperwork. You have two choices: live or die. Choose wisely.

It’s not as easy as deciding that a chronic volunteer who bakes cookies for orphans deserves to live while an elderly assassin who bakes kittens for orphans deserves to die. Each day you’re provided a quota and a secondary objective. These range from “kill all the politicians” to “spare all the people with criminal backgrounds.” Fail to perform these tasks and you’ll face the ire of your superior, Fate, and forfeit your pay for the day. How important is your performance review?

The game progresses through four weeks of work. Each day, you go to the office, review the effects that your previous choices had, choose the fates of the mortals within guidelines, then return to your boss for an evaluation. You can get away with quite a lot without failing the game, but you can’t keep sparing or killing everyone. Believe me, I tried. After four admonishments, you’re fired and have to start over.

You can, however, ignore the secondary objectives and suffer nothing more than a pay decrease. You’re going to have to do this sometimes if you plan on not destroying the human race. Each person you’re merciful or vengeful towards affects four (initially) hidden statistics: environment, living conditions, health, and peace. Make good decisions and the world will flourish off-screen. Make bad decisions, whether intentional or not, and you could be dooming it forever. 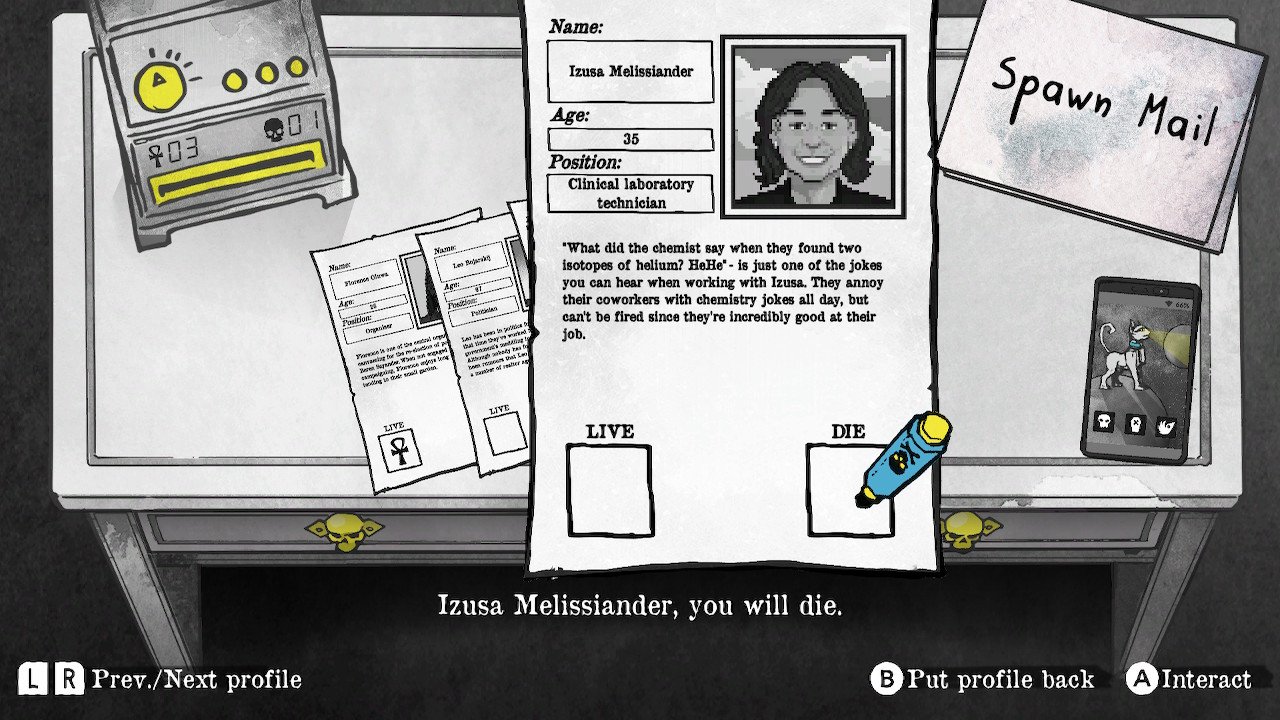 While the game does contemplate mortality and the worthfulness of human life, I didn’t find it to be too terribly weighty with its themes. It leans into dark and absurd humor rather heavily, giving off a lighter tone. So, while you’re shepherding the souls of mortals, you’re also being sabotaged by a cat and talking to a merchant pirate.

Oh, yes. You gain a wage and are able to spend it in an emporium in the basement. There you can buy knickknacks for your desk that range from indispensable to useless. You can also buy cosmetic items that, for some reason, don’t get carried over to your new game, though they’re practically worthless.

That pirate, though. Mortimer. That’s his shtick. That’s his whole shtick. And, wow, does he like to talk. I’d generally say that Death and Taxes is a well-written game, but that pirate rubs me the wrong way. Every time you buy something, he has to give you this worthless story about how he arm-wrestled the kraken or stole mirrors from a lighthouse. They’re all very pirate-y and you have to hear them every damned time, even if you’ve heard them on a previous playthrough. I hate that pirate so much. 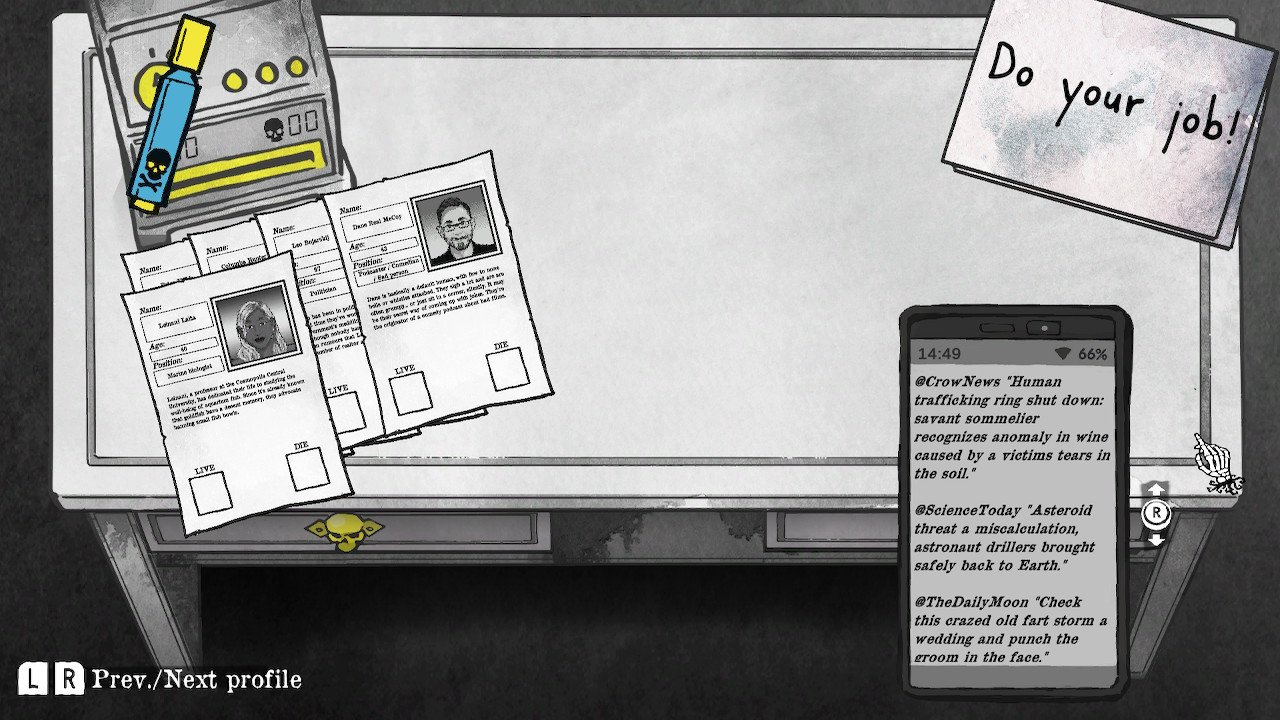 The story also plays out the same every time with minor variations to what humans you encounter during the desktop phases. There’s still incentive to get all the endings, and some dialogue does change and react to your choices, but certain narrative beats can’t be avoided, you just have to live with them every time. There are also smaller sub-stories that play out in the human world if you spare the right people, but none of them seem to have the payout I was hoping for.

There’s also not as much depth as you’d find in Papers, Please. From start to finish you’re presented with a binary choice: live or die. The objectives vary somewhat, the cast of mortals you’re given with changes from game to game, but no new responsibilities are added to your workflow. 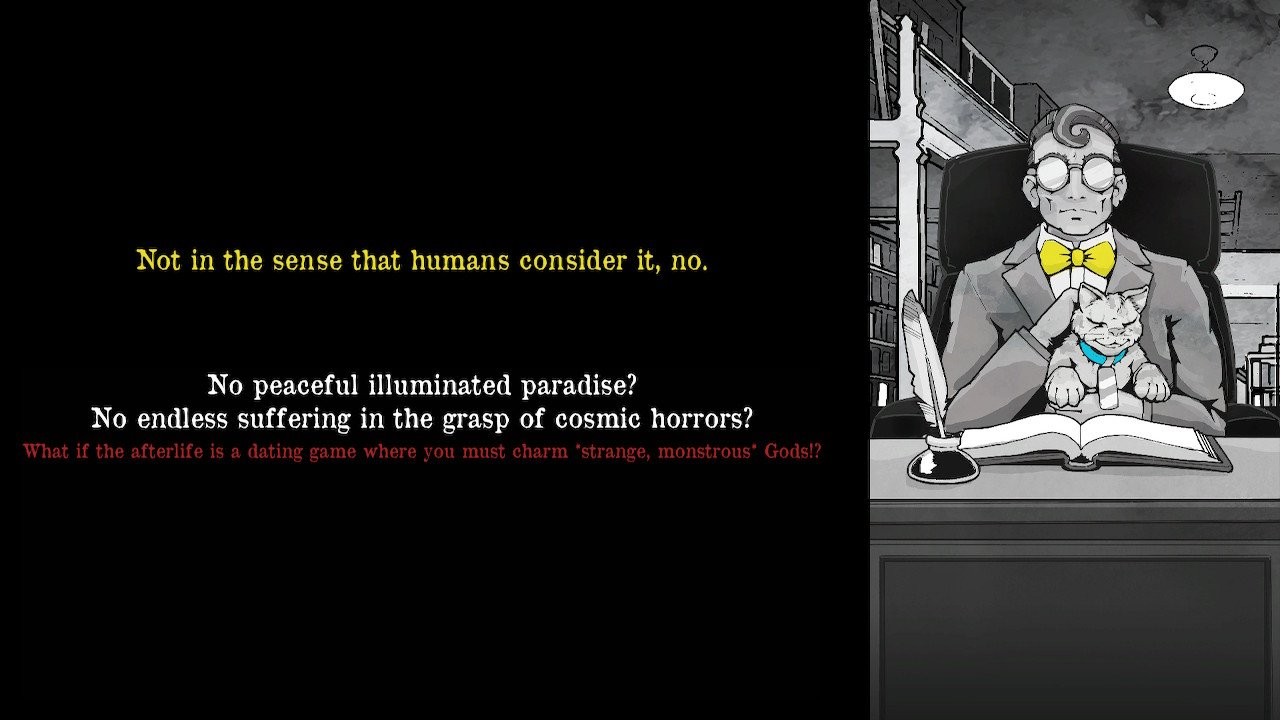 Which is absolutely fine. Death and Taxes does its own thing: nether bureaucracy. It’s over in a couple hours, but it’s a game that has been made for multiple playthroughs. I went through it four times in preparation for this review and scooped up most of the endings. It’s light and breezy and over before it can feel like actual work.

It’s definitely a worthwhile game, especially if you’re a fan of bureaucracy simulators. If you get stimulation from organizing, considering, and processing. Entrepreneurial pirate aside, the game is well written and delivered. The soundtrack is outstanding, the atmosphere is just so, and the replay value is nice. I’m not sure I’ll be exhuming it for another playthrough anytime soon, but it was a decent experience before it was put to rest.