A few days ago, I was crushing beers at Shenanigans, a restaurant-cum-watering-hole in Sewanee, Tennessee, home of my alma mater, The University of the South. Specifically, I was talking with my friend Reed about videogames, and I mentioned that I was playing the new Dead to Rights — less a sequel to the original, and more a reimagining, perhaps in the vein of Prince of Persia: the characters and the setting might be the same, but there shouldn’t be any expectation of narrative continuity.

I mentioned that after three levels, I still hadn’t managed to get the protagonist, Jack Slate, or his canine partner, Shadow, killed. “Yeah, the first one wasn’t very hard, either,” replied Reed.

“You’ll survive as long as you don’t play like an asshole,” I said.

And that seems to be a relatively foolproof rubric by which to judge most mainstream games. Games that provide internal logic and consistency are probably, in the very basic sense, competent. Truly great games of course exceed our increasingly low expectations, but games whose win states can be figured out with a touch of critical thinking ought to be considered the baseline of acceptable game design in 2010.

By and large, this is the case with Dead to Rights: Retribution, even if the game doesn’t always play to its strengths. 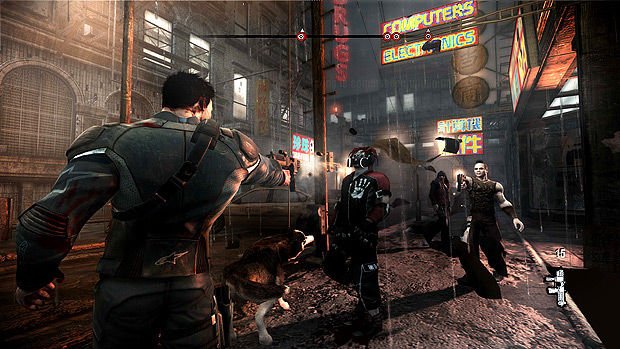 Dead to Rights: Retribution is set in Grant City, a grimy boom town in its death throes, beset on all sides by crime, violence, corruption, and poverty. The proverbial bell tolls for Grant City when the Triads and a union of disgruntled roustabouts, dockworkers, and roughnecks mount an assault on the local TV station. Jack Slate and his dad, both “renegade cops,” set about to investigate. Retribution is a conservative swan song: For half the game, the enemies are generic, stereotypical Asians and unionized laborers; in the latter half, Jack spends his time killing scores of stupidly well armed mercenaries who have been brought into to fight the (artificial) War on Gangs.

Jack’s father, Frank, is a “good cop” from the old school, and they often mourn the dearth of “old-fashioned” “good police work.” Jack ultimately saves the city (spoiler!), but the last scene of the game takes place in a cemetery. A kindly priest explains to Jack that “these are troubled times,” and after paying his respects, Jack mutters, “I’ll be seeing you soon.” The old school, so touted by Jack and his father, seems irreparable.

Retribution ends on a dark note, but that’s not to say that most of the notes before that aren’t dumb. The plot and play are enormously dissonant: Jack explains to Redwater, a particularly zealous fellow cop who’s just attacked a suspect, that “This is not how we do things! We arrest people. We bring them in and we question them!” — but he spends ten or so hours slaughtering generic bad guys. The bombastic score overwhelms the otherwise acceptable faux-noir setting (if noir was addicted to anabolics and PCP, that is), and Jack’s biceps are monstrous. His love interest is shuffled on and off screen too quickly for her fate to matter. And while I think we’re supposed to be dismayed that the final bad guy dies instead of being sent to jail (the old-fashioned way), it’s hard to pay attention when Jack’s vocabulary consists of bad police puns (“You have the right to remain silent!) and motherfucker. Retribution’s desire to look and sound cool overrides any chance the plot had of being good (or even making sense — there’s a pretty nasty continuity error at the six-hour mark), and that desire threatens to spill into the game’s mix of brawling and third-person shooting mechanics as well. 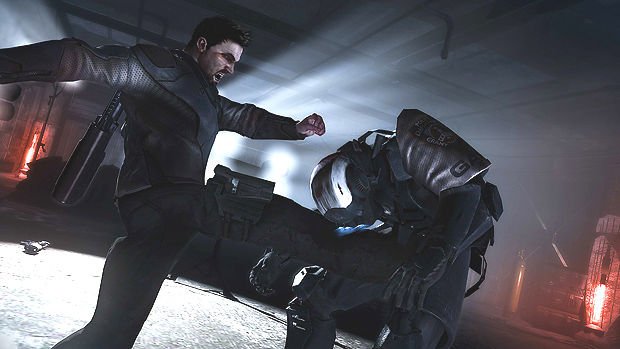 Thankfully (and for some gamers, perhaps more important), Retribution’s combat doesn’t have the same type of schizophrenia displayed by its narrative components. For the most part, the game’s promise to seamlessly blend hand-to-hand combat and cover-based tactical shooting holds up. Jack’s combinations of light and hard punches set a surprisingly fluid and rhythmic pace, accentuated nicely by his ability to disarm opponents. The lack of readily available ammo encourages players to experiment with all sorts of weapons, and Retribution is at its best when it doesn’t force you to stay in one place for too long. Even better, the game does a great job of steadily introducing new enemy types and new weapons.

The enemy AI is another pleasant surprise given the tone of the review so far, impressively quick-witted. They’ll flank Jack, gang up on him, and pick up stray guns laying around. I once dropped a sniper rifle that only had one bullet left, thinking that a well stocked double-barreled shotgun would be more useful (and, in keeping with Retribution’s ethos, more bad-fuckin’-ass), only to find myself with a bullet in my brain, thanks to some intrepid gangster. Most impressive, though, is that enemies will fall back and regroup should Jack capture a hostage.

The camera has a tendency to take a shit when Jack finds himself surrounded, a complaint that is largely mitigated by the fact that most of Jack’s repertoire — hostage-taking included — was designed for crowd control. Disarming leads to quick headshots; Jack can turn on a dime, comboing into several enemies without breaking his stride; Shadow is particularly adept at pulling enemies away from Jack; and Retribution’s brutal take-downs — which threaten to be more gratuitous than useful — are an easy way to thin enemy herds. Even the less realized mechanics, such as the bullet time–esque “focus mode,” don’t distract from the satisfaction of Jack’s brawling and from-the-hip shooting. 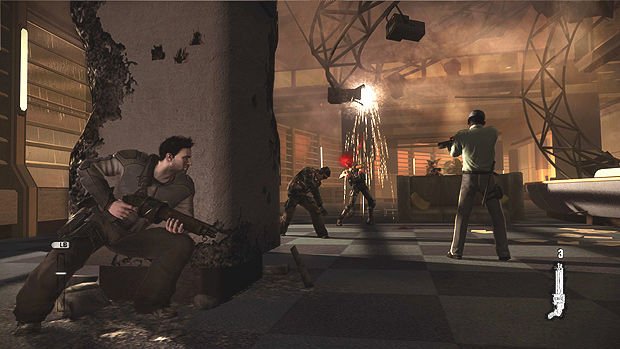 Unfortunately, brawling is only one half of the Dead to Rights equation — Retribution’s lackluster cover-based shooting comprises the rest of the game’s combat. Retribution’s cover system simply isn’t as competent or as fun as its fighting. The game isn’t consistent in terms of what can or cannot be used as cover, the camera isn’t optimized for ducking in and out of it, and you’ll often find yourself sprinting right past whichever doorframe or crate you were headed toward. And for all his utility, Shadow often gets left by the wayside when Jack takes cover. Unable to absorb as many bullets as Jack does, this when Shadow dies the most — and trying to save him will just lead Jack into the nasty crossfire that killed Shadow in the first place. I really like that most cover can be destroyed by enemy fire; but not when the basic systems aren’t robust enough to compensate for it.

The problems with Retribution’s tactical elements are aggravated by the fact that two of the longest levels in the game (one right after another, no less) are designed almost exclusively as linear crawls from one piece of insufficient cover to the next. In most of the levels, these cover-based sections are integrated within the larger context of varying Jack’s fighting and shooting techniques, but the middle section swells with bad level design — one level features a stealth section; a long cover section; a survive-until-this-elevator-gets-here section; a puzzle section in a sewer (what?!); and several rooms whose doors only open when everyone is dead, even though the objective clearly states Jack should be running for his life instead of engaging the enemy.

These levels, thankfully, don’t represent the bulk of what Retribution has to offer, although level design is always a niggling issue. There are a few unintuitive sections to be sure, too often exacerbated when Jack triggers a cut scene that drags the camera around the level or, worse, drops Jack (usually weaponless) in a totally different place. For a game that succeeds so well in terms of pacing its combat and (admittedly bare-bones) plot, it’s a shame that the level design creates so many stumbling blocks. 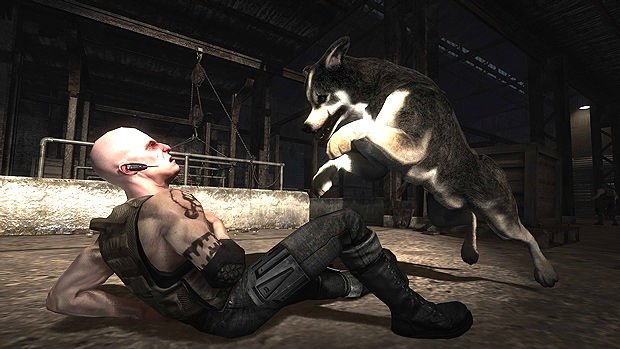 Being able to play as Shadow presents an interesting, and largely successful, wrinkle in Retribution’s basic composition. Most of Shadow’s sections consist of stealthily killing guards and retrieving keys for Jack, and though I wish Volatile had given Shadow more, and more varied, face time, they’re largely successful. Shadow has a few basic functions — sprint and rip out testicles — but his most interesting mechanic is his stealth mode which allows him to effectively see through walls. Totally ridiculous, but I’ll chalk it up to his canine sense of smell, on the grounds the mode is really well executed. Shadow can perform stealth kills, hide bodies from (again) remarkably competent soldiers, and lure enemies away from large crowds with a series of barks and growls. Fans of Batman: Arkham Asylum will recognize traces of “detective mode” in Shadow’s stealth sections, but, for my money, Retribution pulls it off better. Shadow’s stealth mode doesn’t dominate the game — remember how there was no reason to ever not use detective mode? — and it’s one of the few times that Volatile shows anything resembling restraint over the course of Retribution. 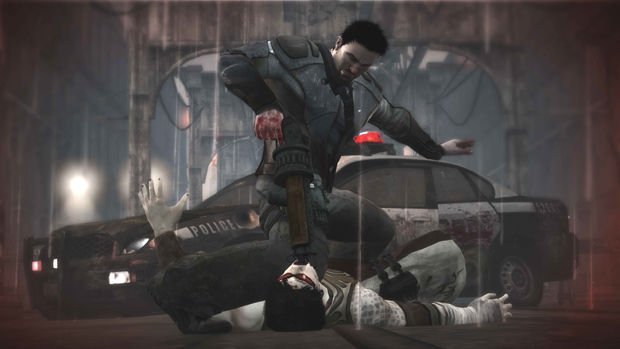 For a game with such a tired narrative structure, it’s no surprise that Dead to Rights: Retribution plays it safe with its mostly-successful mechanics. The story is bombastic and gratuitous and level design can be needlessly frustrating, but the strength of the combat and Shadow’s stealth largely compensate. Retribution is rarely fancy, but it’s quite competent, and there’s depth to be found in Jack’s arsenal of combos, disarms, and take downs as well as the tactical possibilities presented by Shadow. Dead to Rights: Retribution is Volatile Games’ first current-gen project and while the game is rough around the edges, they’ve laid a solid foundation.