The Darius series may not be as recognized as competing space shooters such as R-Type and Gradius, but it deserves its spot alongside those series as the best shooters of all time. This latest iteration packs in an enhanced arcade port that can be played with up to four players and a brand new single-player campaign, but for a steep price.

Unfortunately, instead of providing quality content, Dariusburst Chronicle Saviours is filled to the brim with repetitive filler to justify its price point. 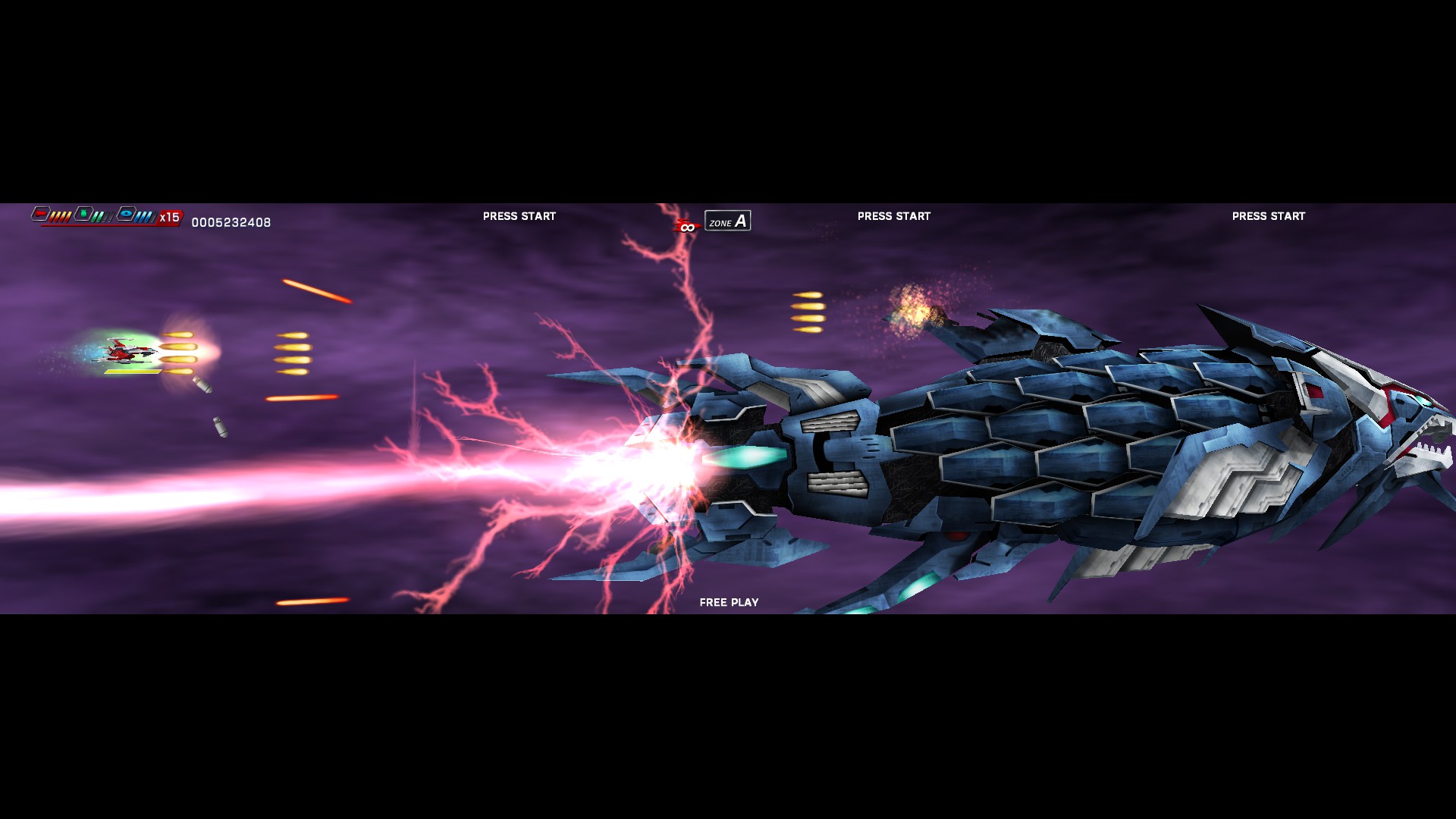 AC mode offers a few different flavors of play: Original, which closely emulates the original arcade game; EX, which ups the difficulty; and Chronicle, which offers around 3,000 areas. Everything in AC mode displays in an ultra wide screen aspect ratio true to the arcade game; this means the top and bottom of the screen are black while the middle is a long narrow playing field, unless you own an ultrawide monitor. On paper, this sounds silly, but it somehow makes the game feel a lot more arcade-like, especially if playing on PC where the game can be played across multiple monitors.

Original and EX modes are pretty standard Darius affairs: select one of three starting stages, move from left to right shooting enemies with your standard weapon and burst attack, collect upgrades by killing colored enemies, fight a giant boss ship, decide where to go next, complete three stages, and that’s it. Rinse, repeat. Each path correlates to difficulty and has its own stages and bosses. The only standout features are being able to select from various ships that each play a bit different, and the ability to play with up to four players locally.

Chronicle mode is laid out across planets with each containing numerous areas to liberate. Each area offers different challenges such as using only specific ships which have varying weapons, or playing with multiple players. Because there is no online play, you’ll have to gather together other space shooter fans or wait till someone else playing on the same cabinet completes that challenge.

AC mode functions as if you are playing one of 64 physical arcade cabinets, which you are randomly assigned to when first launching of the game. Because the game doesn’t explain this (or anything really), I switched to cabinet one in the menu, as I thought 13 would be an odd place to start. Players on each cabinet work together in Chronicle mode to liberate the various areas on the planets, meaning if you don’t happen to have three other friends, someone will eventually liberate that area allowing you to select others. That said, you don’t have to complete areas in any order and can jump around between planets at will.

Chronicle mode having around 3,000 areas sounds like fantastic value, until you realize most of the areas are the same few levels just with tweaked challenges, orders, and ships. If you and three local friends are not opposed to grinding and repetition, you might dig Chronicle mode, but to me it just seems like fluff.

The same criticisms can be said about Chronicle Saviours‘ CS mode, as it is over 200 areas of repeating levels and bosses. CS mode at least offers a different aspect ratio that fills more of the screen and feels more like a home experience, and a level selection web with dated quips that resemble a very shallow story. There is also something to work toward in CS mode, as ships are unlocked to be used as you wish via points earned based on your score, though I found myself mostly using the default ship for each area. 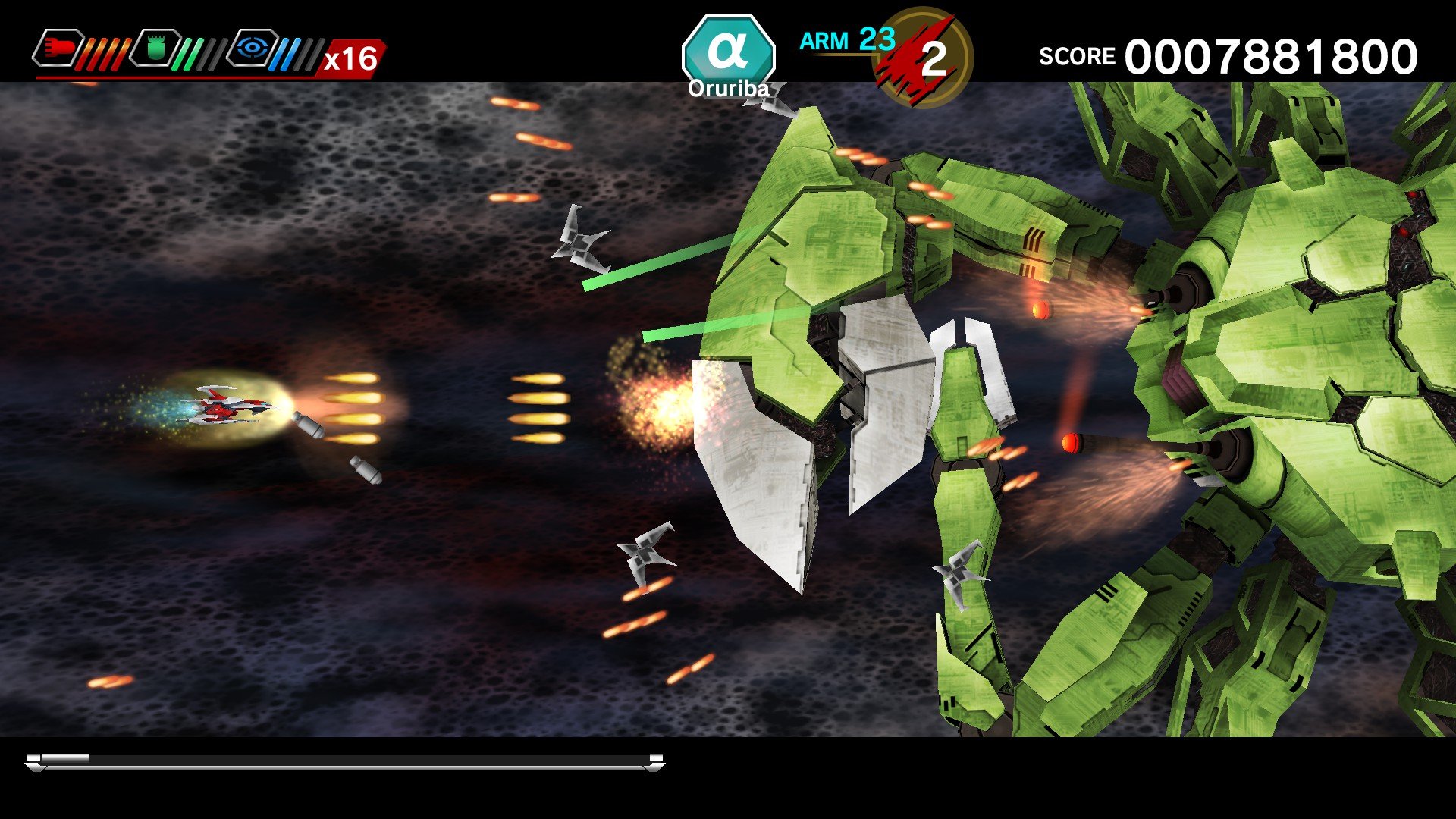 Aside from the filler content, Dariusburst Chronicle Saviours has satisfying combat all around. Tons of enemies fill the screen, bosses are massive three-dimensional fish or crustaceans, and the soundtrack is killer. I could see myself popping in every now to check on progress in Chronicle mode, and perhaps play a level or two, but this certainly isn’t the kind of game you’ll want to attempt to marathon.

The price discrepancy between platforms makes little sense and is borderline offensive. The PC offers multiple monitor support, while the PS4 and Vita offer Trophies and cross-save support, but not cross-buy. The Vita version lacks multiplayer. While this isn’t the first time I’ve seen a game released on consoles at a premium price, it is still a poor practice. For what equates to a fancy enhanced port of a nearly six-year-old game, $39.99 is far too much, let alone $59.99 on PC.

Unless you’re a die-hard space shooter fan who doesn’t mind repetitive filler content, it is hard to recommend Dariusburst Chronicle Saviours at the current price point, even if it does have solid gameplay. I’d suggest waiting till it goes on sale for somewhere around $20 or less, as that is a far more reasonable cost.