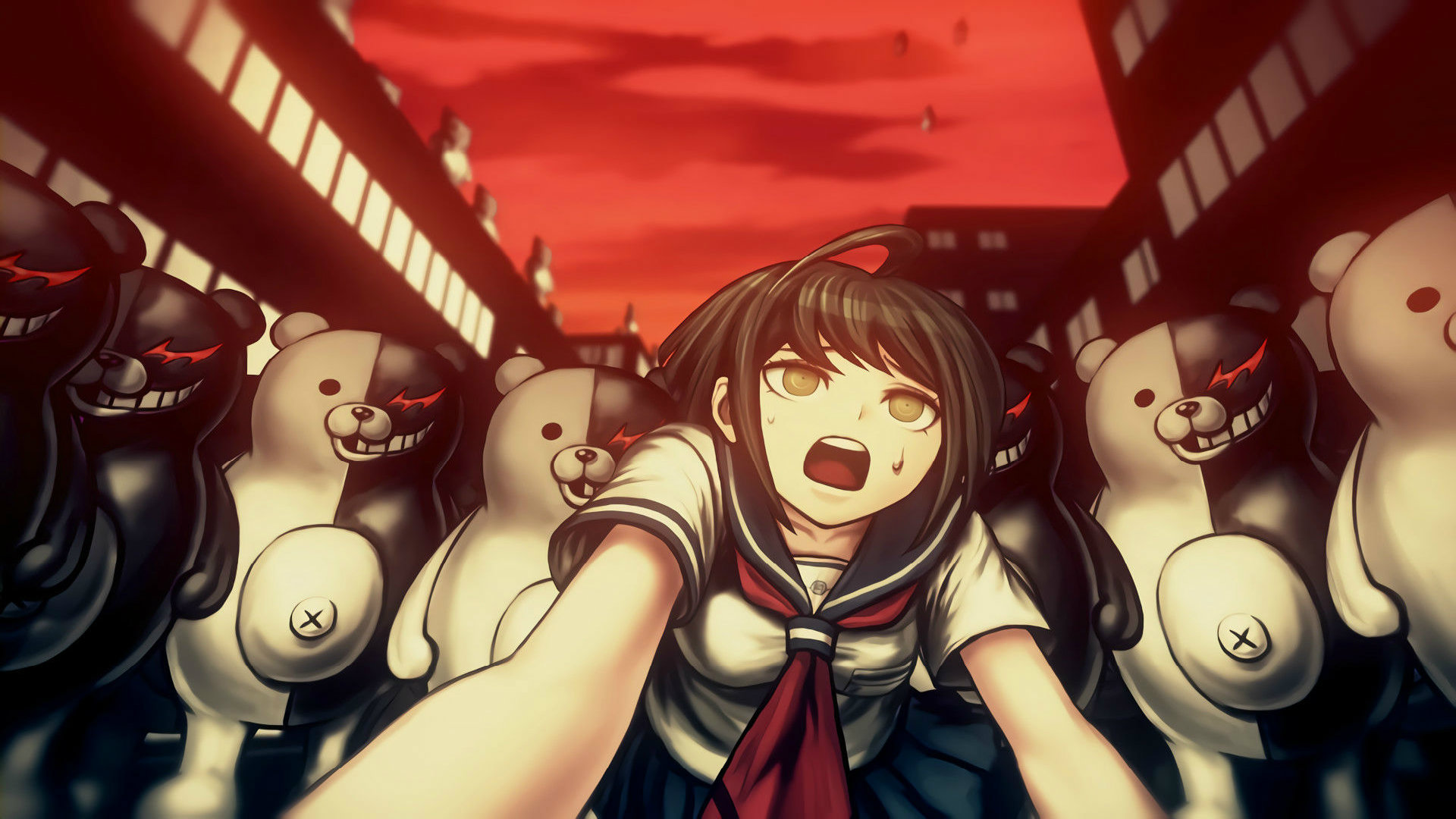 The Danganronpa series has such an expansive narrative, it’s spread itself across multiple games, anime, and short stories. By its very nature of spreading itself out so thin, some of the side projects just aren’t going to mean as much in the long run. Therefore, the hope is that the side projects can carve out their own unique identity within Danganronpa‘s wacky universe.

The “another” in Danganronpa Another Episode: Ultra Despair Girls‘ title implies it’s an extraneous adventure, and that’s somewhat correct. It may lack the impactful writing of the rest of the series, but Another Episode mostly makes up for it with an admirable shift in gameplay style and tone.

Taking place in-between the events of Danganronpa: Trigger Happy Havoc and Danganronpa 2: Goodbye Despair, Another Episode follows Komaru Naegi, sister of series protagonist Makoto, after she was kidnapped and kept locked in a room for a year (essentially missing the start of the Biggest, Most Awful, Most Tragic Event in Human History). Forced into a survival game by five kids calling themselves The Warriors of Hope, Komaru and her new friend Toko Fukawa (and Toko’s serial killer alter ego), have to escape the town and use a megaphone hacking gun to defeat an army of killer robot bears.

As the narrative here is informed by the other two games in the series, and if you’ve somehow avoided the other two (and their PS4 re-releases), I’d have trouble recommending Another Episode. It’s not completely necessary to have prior knowledge of the series at the jump, but the real worthwhile bits in the plot have to do with how it fits into the overall series. So to truly enjoy some of the reveals and Easter eggs throughout, a working knowledge of the series is needed rather than, say, just a base interest in the quirkiness of the characters like the rest of the entries. And it’s not like the plot is involving enough in its own right without the murder mystery draw of the previous titles. The characters here are intriguing, and Komaru is probably my favorite character in the entire Danganronpa series, but the depth just isn’t here.

As an apology to series fans for a lack of depth, Another Episode decides to evolve the series in other ways. Becoming a third-person shooter, Komaru often finds herself in tight corridors, hallways, and the occasional open area as the killer Monokuma robots chase her down. Unfortunately, the shooting tends to get repetitive. Komaru’s hacking megaphone eventually gets differing types of “Truth Bullets” (e.g. ones that make enemies dance in place, a flamethrower, ones that move objects in puzzle segments, etc.), and there are a few differing types of baddies with morbid designs, but most of Another Episode‘s gameplay feels bloated. I feel like trimming a chapter or two down here would’ve instead amplified how novel an idea this new gameplay style is rather than make it feel like a hindrance when the plot starts making significant headway. Clearing rooms soon feels like a chore instead of stakes-infused gameplay with plot revelations as a reward.

Controls for the re-released version of Another Episode are definitely a cut above the PS Vita version. Along with the built-in ability to choose English or Japanese audio, being able to use a DualShock on the PlayStation 4 version is a dream. Dealing with the camera is still a struggle, and aiming can feel like moving through pudding when dealing with multiple enemies, but it felt as if I were being held back by the limits of the framework rather than falling victim to avoidable mistakes. Playing as Toko, thanks to a limited invincibility melee mode, feels much better as well with easier to connect melee attacks. I still fought with the camera many times, but at least I was more inclined to activate that ability than before.

For fans of the Danganronpa series who’ve never experienced Another Episode, I can’t recommend it enough. The shooting gameplay may be stiff, but the world draped around it is more morose than much of series past. Yet despite these darker visuals, there’s an even more lighthearted tone than ever before. Komaru and Toku are a delight, and have a witty banter between the two even while trying to survive a death game.

But if you’ve already played through Another Episode on PlayStation Vita, or have never experienced a Danganronpa game before, there’s not a lot to go on. The shift to third-person shooter is a novel idea, but soon becomes unbearable. 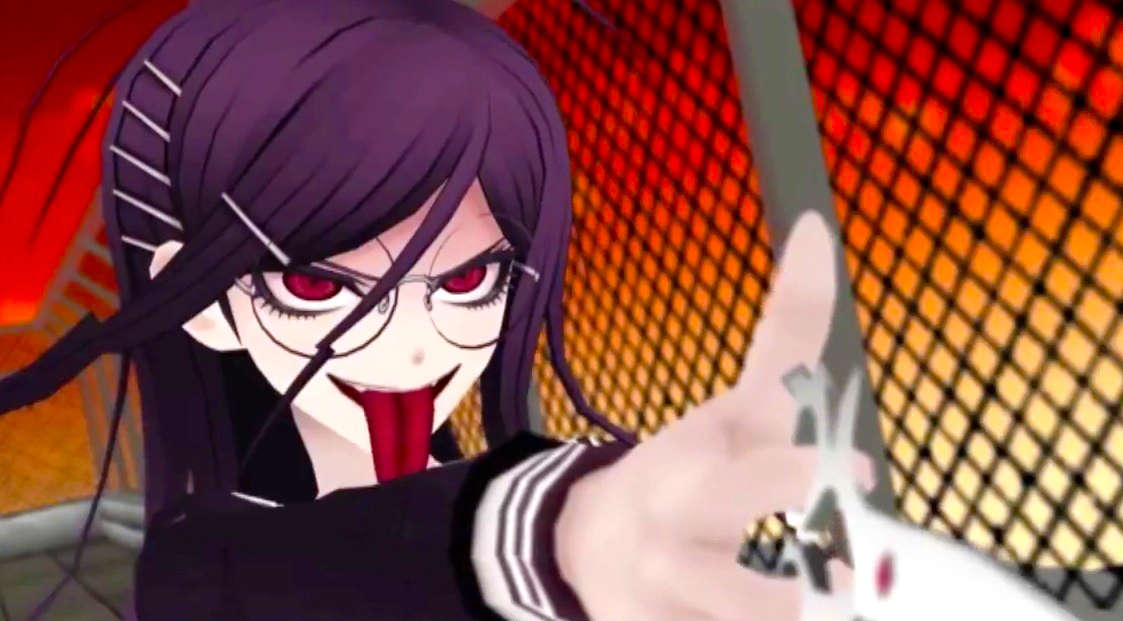 Danganronpa: Trigger Happy Havoc and Goodbye Despair have been some of my favourite Vita games in recent years. A pair of murder mystery visual novels, the games melded puzzle solving, courtroom drama, and murdered school kids picking each other off into a beautiful combination. Earning an 8.5 and an 8 here on Destructoid, I was excited to see if the third Danganronpa game would hit that same sweet spot the previous two entries had.

Unfortunately, I don’t entirely know what to make of Another Episode: Ultra Despair Girls. While much of the polished writing and narrative presentation is still intact, the new set of mechanics the story is wrapped in rarely left me fully satisfied. While Danganronpa made a great murder mystery visual novel, it’s not as impressive as a third-person shooter.

So, let’s start with where Ultra Despair Girls departs from the previous Danganronpa games on Vita. Instead of investigating crimes scenes for clues, the bulk of your gameplay time in Ultra Despair Girls will be spent as Komaru Naegi shooting robot Monokuma bears with a techno-megaphone. The megaphone, which apparently acts as a “hacking gun,” shoots lines of “code bullets” to effect the robots you come into contact with. Break Bullets act as standard damage dealers, but your gun also has less typical ammo types, such as Dance Bullets that cause enemies to stop on the spot and dance, allowing you to put distance between them and yourself.

Much of the core gameplay loop feels like you’re playing a zombie-themed third-person shooter. Enemies tend to be slow and rambling, take time to kill, and deal large amounts of damage if they reach you. While this is fine in theory, claustrophobic environments, an overly close camera, and numerous invisible walls make this core gameplay at times more frustrating than it needs to be.

The idea of a code gun shooting robotic enemies is cool, but the gameplay hiccups — as well as the infrequency of acquiring interesting new code bullet types — meant I rarely got excited. Oh, there’s also a melee sword combat-focused playable character, but their use is limited by a meter. That’s a real shame, because a second gameplay style available to switch to at any time might have helped keep the mechanics from becoming stale this fast.

So, does the narrative save Ultra Despair Girls from death at the hands of one of Monokuma’s elaborate devices? Well, yes and no. It rescues the game from death, but still gives it a mild case of public torture.

In Ultra Despair Girls, we find ourselves in a city overtaken by murderous young children bent on seeing adults torn to shreds. This gang of prepubescent killers, the Warriors of Hope, have amassed an army of youngsters to control robots that are utilised to kill from safety. Playing as the younger sister of the first game’s protagonist, who has conveniently been locked away in her apartment for a year and not noticed that the world has gone to shit around her, you escape with the series running split-personality serial killer and attempt to take back control of the city.

Thanks to the shift in narrative focus from confined drama to city-sprawling mission, there’s a lower frequency of plot twists than in previous entries. The twists and turns in the narrative are among the strongest in the series, but they feel padded further apart. The cast of characters introduced in Ultra Despair Girls are just as over the top, memorable, and well-written as any characters introduced to date in the series, which is one of the areas the game continues to shine. General moment-to-moment dialogue and character interactions are superb and were the driving force that kept me invested through to the end.

The biggest problem: narrative pacing. The game felt like it was probably five or six hours too long.

It’s worth noting that both the enemy designs and narrative in Ultra Despair Girls are some of the darkest, creepiest, most unsettling to date, and that says a lot for this particular series. From horrible mutated creatures to themes I would hesitate to subject adult characters to let alone children, the game gets pretty unnerving in places. That’s not a complaint by any means — Ultra Despair Girls pulls it off perfectly.

Ultimately, Danganronpa Another Episode: Ultra Despair Girls just didn’t click for me the same way previous games did. Sure the narrative still has some strong moments, but it’s punctuated with third-person shooter gameplay that doesn’t enhance my engagement with the narrative the same way the first two visual novels did. If you’re a series fan, there’s a good, text-heavy, hands-off narrative to be explored here, but the gameplay sections really dragged it down for me.