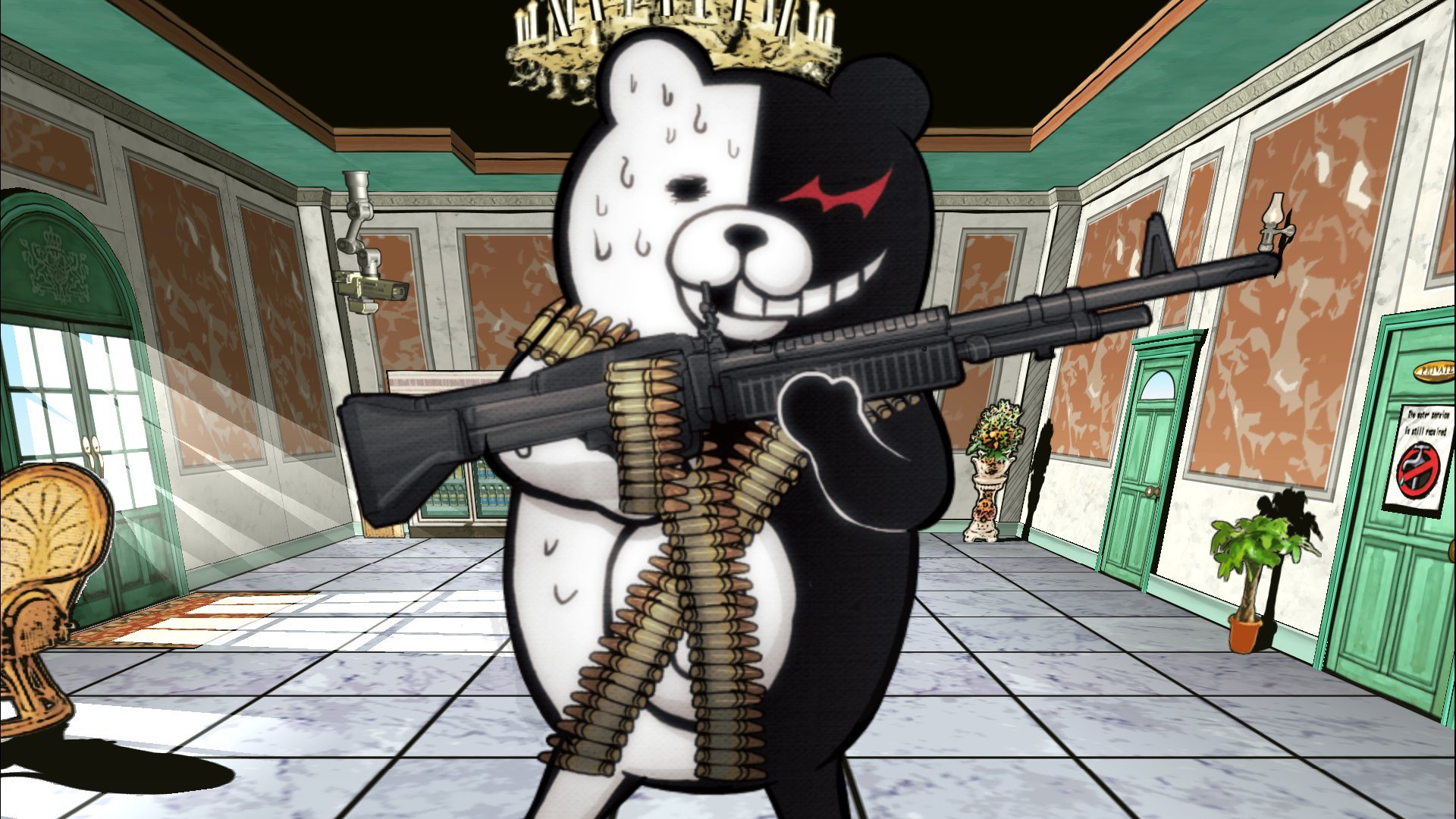 A body has been discovered!

Even if you don’t like visual novels, I think you should give the Danganronpa games a look. If that’s the answer you came here looking for, and you want to go into the series completely unspoiled, you have my blessing to grab a copy of Danganronpa 1-2 Reload (the collection we’ll be looking at today) without reading the rest of the review. If you have even the slightest respect for story in video games, you’ll have a good time.

Consider that your “doctor’s letter.” Show that opening paragraph to your partner, your parent, or your banker — whoever you need to ask for permission. If they look up the game and see a bunch of anime high school girls, tell them to relax. It’s okay, you can buy a visual novel with heavy anime influences, and I won’t look down on you. Since both of the core Danganronpa games are available on just about every platform (including the PSP), the franchise’s chosen genre has become its greatest hurdle.

It sucks that, in this untamed post-genre video game landscape, I have to sit here and absolve the visual novel on the off chance someone will dismiss Danganronpa because it’s got a lot of reading — but here we are! I’ve said before that every genre will have something you like, and I suspect that Danganronpa will fill that need for a lot of people. For my money, there hasn’t been a cast of characters this engaging since Mass Effect 2 – even if you don’t fully gel with Danganronpa’s mechanics, this is a story worth seeing. 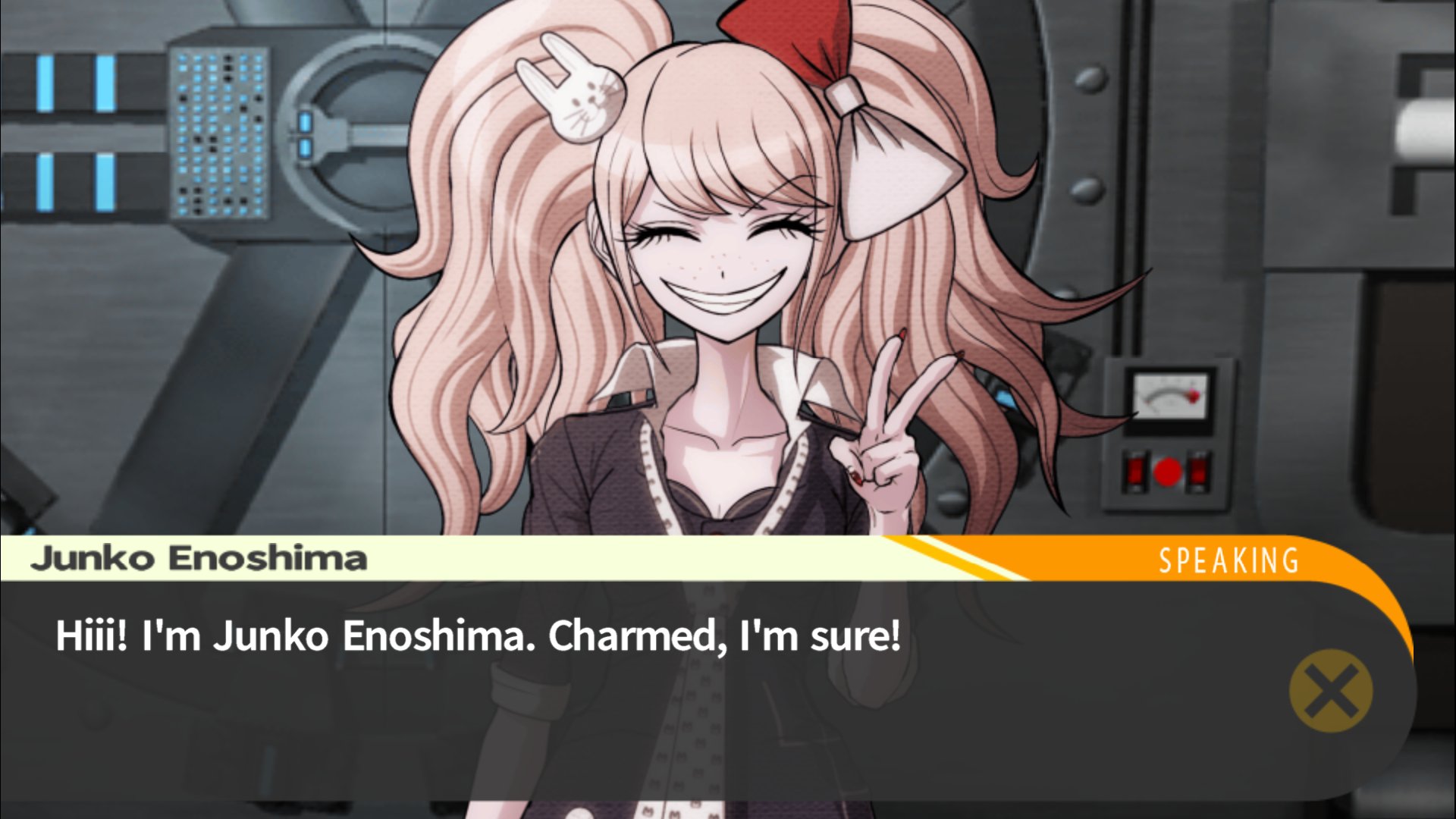 Both Danganronpa: Trigger Happy Havoc and Danganronpa 2: Goodbye Despair have the same basic premise: some high schoolers are trapped (in a school/on an island) by an evil mascot and the only way to escape is by murdering someone and getting away with it, at which point everyone else (in the school/on the island) will be executed. As you try and survive, you must team up with your friends to solve the mystery of the (school/island). As Battle Royale knock-offs go, this one is fairly straightforward – less social commentary in the vein of Battle Royale or Hunger Games and more “an excuse for some murders to happen in a closed system.”

And what good murders they are! Here’s where the divide between Danganronpa and its sequel comes to the fore; the murders, like just about everything else, are better in Goodbye Despair. That’s not to say Trigger Happy Havoc is bad, it’s just that the second game can get really inventive since it doesn’t have to worry quite as much about table-setting. Since I’ve played the Danganronpa games before, I was able to appreciate the setup for each killing a little bit more, and they absolutely hold up on a repeat viewing. Even if you already know whodunit (which I do not recommend, you should go into this game as blindly as possible), the mechanics of the crime are still clever enough to carry the chapter.

Although the characters in Danganronpa take each murder seriously, the over-the-top nature of some killings as well as the pink blood makes the whole affair more darkly comic than anything else. That sense is fostered in part by Monokuma, the aforementioned mascot in charge of the killing game. Monokuma is as much of a character as anyone else, regularly switching between warden, instigator, and sadistically gleeful Greek chorus. Mascot characters are often cynically designed to be breakout stars, but Monokuma absolutely works. He’s great. 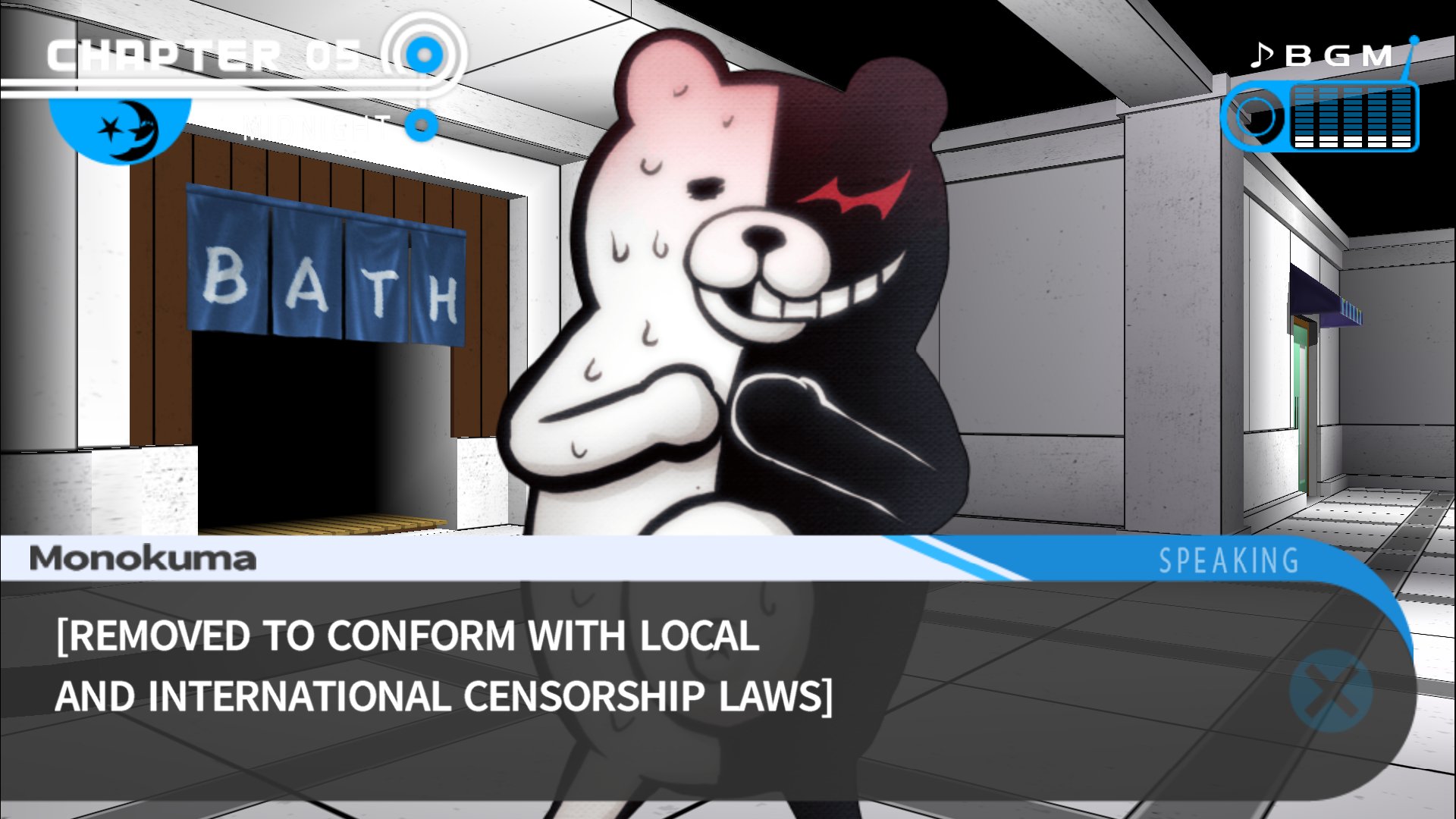 Not to imply the rest of the cast isn’t compelling: you see, the high school the series centers around is no ordinary institution. Hope’s Peak High School recruits the Ultimates – the very best high schoolers in a particular field. So you’ve got the Ultimate Baseball Star, the Ultimate Fashionista, the Ultimate Chef, and so on. This makes each character instantly memorable, giving them strong personalities to go along with their defining trait. Even if you can’t remember a character’s name, you remember what they’re about.

Towards the beginning of each game, before the characters have really gone through any development, the casts kinda remind me of something like Osmosis Jones or Inside Out, where you’ve got all these very large personalities dedicated to a specific function. That’s towards the beginning, though. After the first murder, both games let the characters breathe a little bit more, helped in part by optional “Free Time” hangout sessions in each chapter where you can initiate with living characters. By the end, you’ll really come to appreciate the surviving students, even after you learn their nasty secrets. Although some of the murderers in Trigger Happy Havoc could skew a tad unsympathetic, most of the killers in Goodbye Despair have relatable motivations and aren’t really all that bad.

(If you end up really liking these characters, both games come with a “dating sim” mode with no murders where you can just hang out with the cast, which is perfectly fine if you’re into that sort of thing)

This is crucial, because both Danganronpa games eventually lean on an intangible concept to carry the protagonists through the finale. In the first game, it’s “Hope,” and I feel perfectly comfortable bringing that up because the clash between hope and despair is the central conceit of the entire franchise. Victory powered by an emotion is a cliche most often associated with anime, but I actually like that kind of climax. It doesn’t work if you don’t care about the characters, but it’s hard to not like the Danganronpa students. 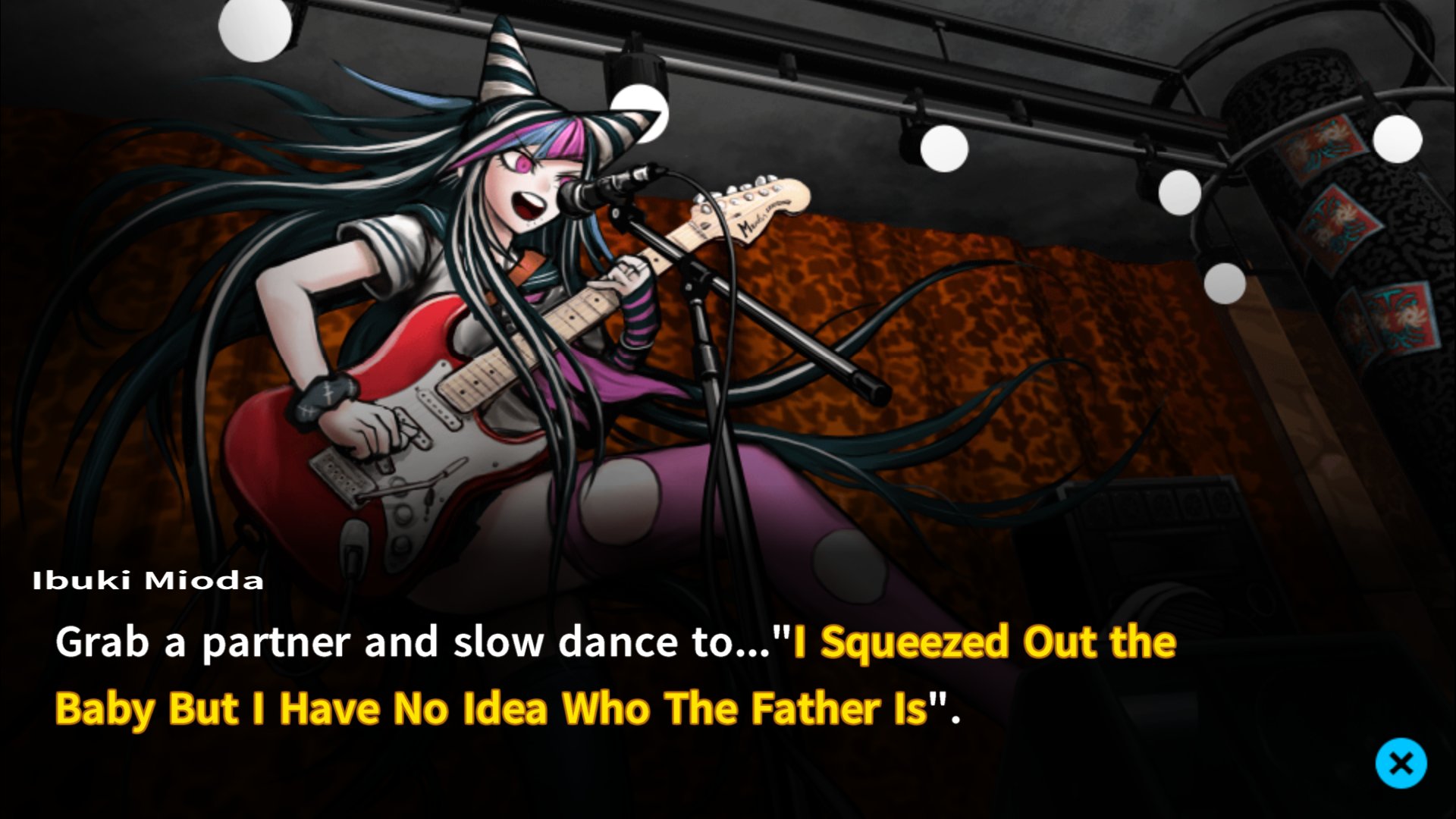 That kind of ending is the building blocks of storytelling distilled and made literal. Superhero stories do it all the time, like the ending of Guardians of the Galaxy or that iconic Spider-Man story where he’s trapped under the heavy machinery. If we like the main characters, we want to see them overcome adversity; sometimes for themselves, sometimes because others are counting on them. When characters pull from that strength and vocalize it, sometimes it feels like they’re saying what the audience is thinking, engendering an even stronger connection. If done incorrectly, then you’ve just got a character stating their motivation. That’s why you need emotion, you need a well-told story with characters you can at least understand. Danganronpa 1-2 Reload has all those things.

If there’s any part of Danganronpa where a new player might take fault, it would be the “game” part of the video game. There’s nothing offensively terrible in here; in fact, I would even say most of the game is “fine” to “good.” Moving around Hope’s Peak and Jabberwock Island isn’t exactly what you’d hope from a video game released in 2017, but a simple fast travel system and localized objectives make sure the moment-to-moment movement is just fine.

Things get a little stickier once you move into the class trials, where the students try and uncover the identity of the murderer hiding among them. The primary minigame in this section is the Non-Stop Debate, where you have a gun loaded with “Truth Bullets” (clues and testimony) that you can use to shoot down contradictions (or use to agree with statements in Goodbye Despair). The Non-Stop Debates can be quite a lot of fun, especially because that’s where the best music in the game is hiding. They accurately gamify what it’s like to argue in a group, right down to all the white noise in the background. 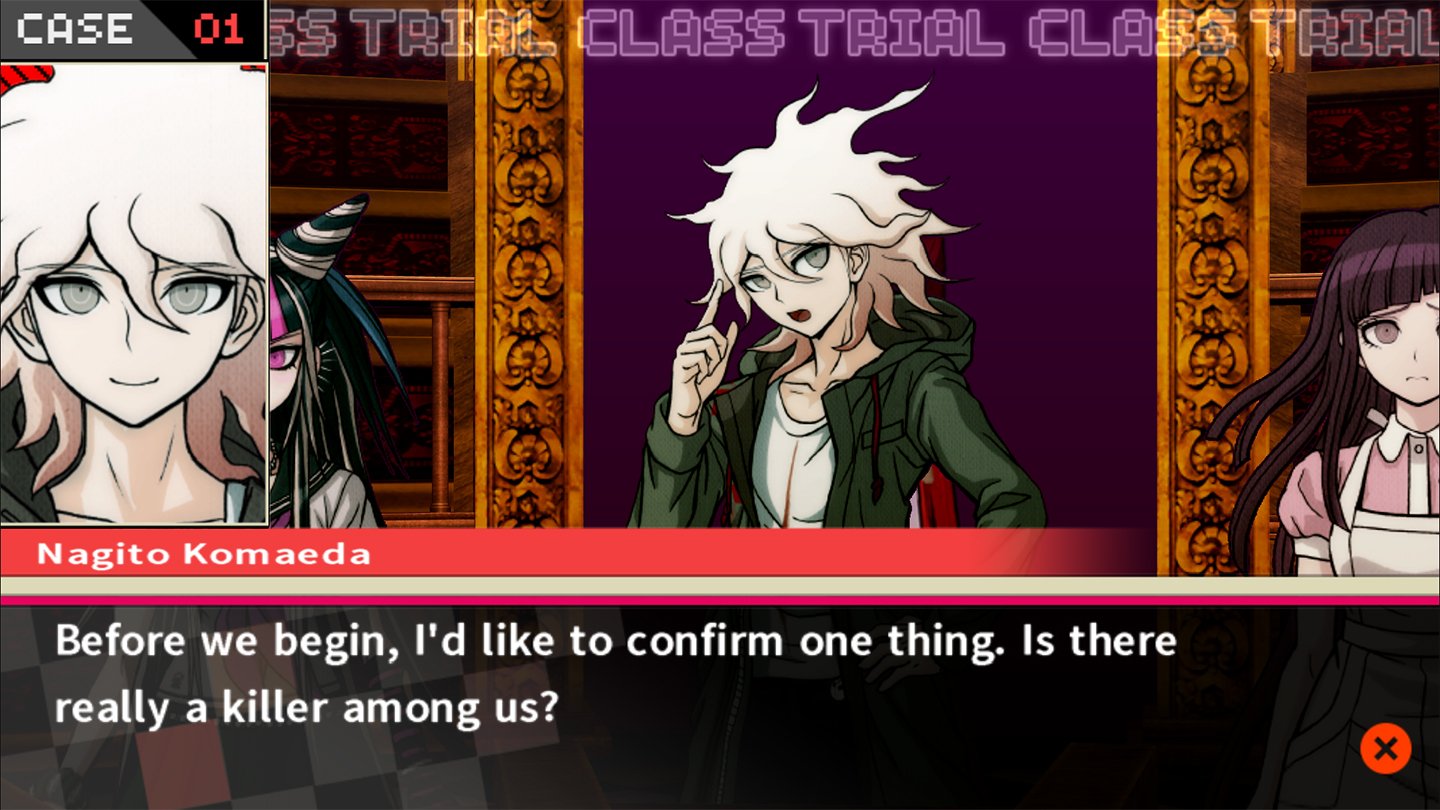 The rest of the minigames often depend on the situation. I never really liked either version of Hangman’s Gambit, where you have to assemble letters to answer a question, but I do prefer the Trigger Happy Havoc version, which is slightly less intense than its counterpart in Goodbye Despair. It’s not a bad minigame, it’s just not as fun as some of its counterparts. The one-on-one arguments in Goodbye Despair, where you’re using swords to cut through statements, felt a lot better on the PlayStation Vita – same thing with the rhythm-based Panic Talk Action (née Bullet Time Battle).

I’m not sure if something was lost in translation between the Vita versions and this PS4 port, but the minigames (Non-Stop Debate aside) never quite felt as solid as they did my first time around. In fact, I might give the Vita ports of Trigger Happy Havoc and Goodbye Despair a slight edge overall, if only because visual novels work a little better on a portable system. The Reload port is a perfectly fine way to play these fantastic games, but it doesn’t demand a big TV and a couch.

Also, at the end of every trial, you have to present your “closing argument” in the form of a manga with missing panels that you have to fill in from a set. It made me feel like Monk from the hit TV show Monk as he wraps up a case, so obviously that’s the best minigame.

I do wish both games would tone down the fanservice, since that really does nothing for me aside from making me feel a bit uncomfortable. But aside from that, Danganronpa 1-2 Reload is an easy recommendation. It’s a visual novel, yes. You’re going to spend a lot of time reading. However, just about everything you read will entertain you in some way as you watch these incredibly strong personalities play off each other. If you have any hangups about playing a visual novel, let them go. Pick up the Danganronpa games on whatever platform you prefer and enjoy some of the sharpest character writing I’ve seen in years.