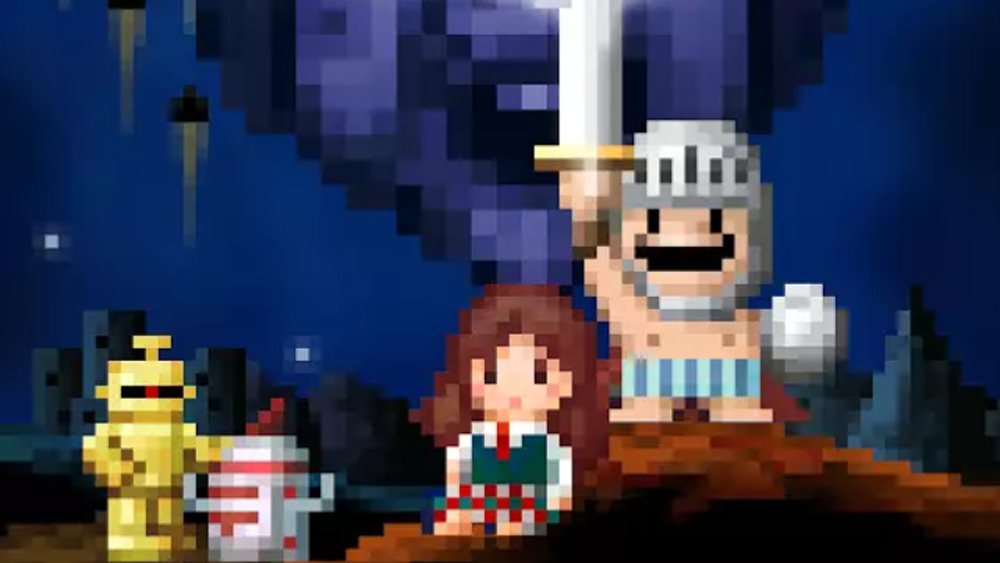 Developer Yoshiro Kimura has a brain that, I believe, runs perpendicular to everyone else in the games industry. When creating his own games, you get oddities not only in design but in character and world building. Sometimes his genius shines through, like with Little King’s Story. Other times people just don’t get it, like with Chulip. But whether he succeeds or fails, I’ve found his games stay true to who he is.

Unfortunately, who he is is someone who makes games that don’t really sell. Few people bought Little King’s Story and even fewer picked up Chulip. So it’s no surprise that he’s brought his talents to the mobile market, where you don’t have to sell hundreds of thousands of copies of a game to find success. He’s also brought his charm, his wit, his humor, and his excellent game ideas, resulting in what is flat out the best mobile game I’ve played. 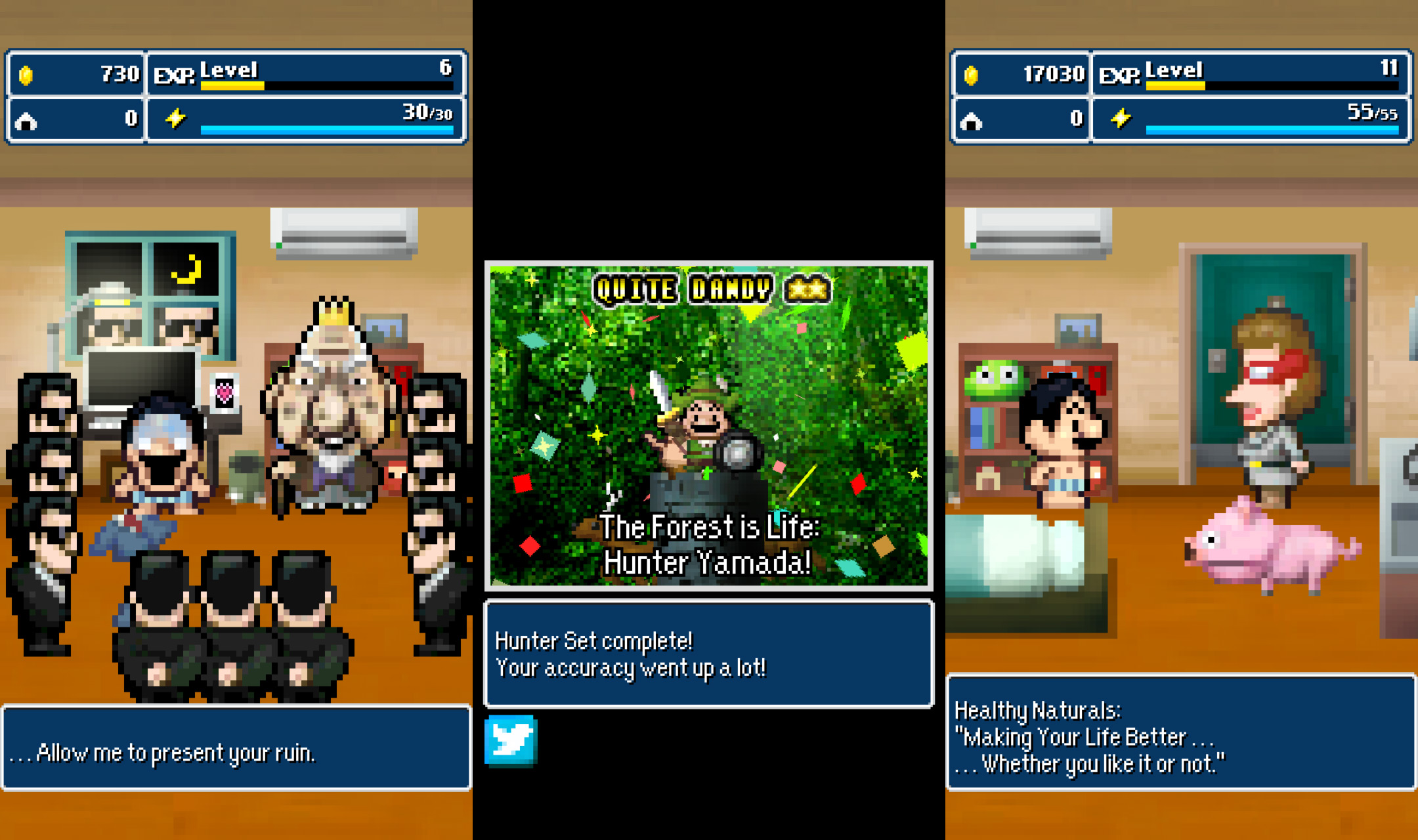 Stop me if you’ve heard this one before: a petty, narcissistic billionaire takes over a country and all of its industries, putting his three asshole children in charge. That’s right, I’m of course talking about Hidemaru Ayanokoji, chairman of the Empire Group, which owns Empire Games, which employs 36-year-old Yamada-kun. I should say employed because early in Dandy Dungeon: Legend of Brave Yamada, Yamada gets canned and caned right in the mouth because he stopped showing up for work.

You see a day prior, Yamada-kun met his new neighbor Maria and fell instantly in love. Being the socially awkward man that he is, and realizing that falling in love with a girl half his age who is probably still in high school might not be super appropriate, Yamada figures the only way to win her heart is to make a game with her and him as the lead characters in it. He rescues the princess in the game, and maybe, just maybe, the princess falls in love with him in real life.

After meeting these characters in real life, Yamada implements them into his game in various ways. As the player, you get to help him test and debug the game as he builds it. Every time Yamada the developer levels up or meets someone new, chances are some new element will be added to his game.

The game within the game is a puzzle RPG with influences from Shiren the Wanderer. There’s literally a dungeon in here called Yamada the Wanderer. Getting through each dungeon floor is simple: all you do is map out a path for Yamada to follow that takes him across every tile. Maps are 5×5 grids that fit perfectly onto the mobile screen. Any tiles you miss turn into flames and burn him once you hit the goal. There is a time limit for you to draw your path, however, it doesn’t activate until you actually touch Yamada.

As you go through each dungeon floor, Yamada is challenged by traps and enemies of all sorts. Like with Shiren, he starts each dungeon at level 1. Yamada attacks automatically and you can aid him on his quest with tools like potions, spells, and rats that take out all the traps on a floor. Use them too much and they break, but it’s not too hard to get more. Each time you use an item, it takes longer to recharge and I had a few dungeons where I lost because my potions wouldn’t recharge fast enough. It didn’t help that I could only carry five tools at any time.

I was infatuated with the formula from the first dungeon I tackled. I was hooked, nay, I am hooked and every ride on the train this week I would stand there, oblivious to the world around me, as I tried just one more dungeon, just one more floor. Keeping me from that enjoyment was the energy meter.

For a free-to-play title, Dandy Dungeon has a few microtransactions. There are rice balls, which can revive Yamada if he falls in a dungeon and can be used to feed Hungry Questers, who pick you up some sweet rare gear. Rice balls can be purchased, or earned in game on rare occasions. Then there are golden keys which grant you access to the Golden Palace, but you can also use golden fragments which are found in the game. Finally, you can buy larger inventory space for all the loot you collect. This can also be expanded in-game.

I didn’t buy any of that. What I did spend my money on were the ducks. These are three cute ducks that waddle around your apartment and sing to you anytime your energy meter runs low, filling it up so you never have to worry about that damn meter. In other words, I bought the game for $8.49, a price I found perfectly acceptable for how much fun I was having with it. If you don’t pay, know the energy meter fills pretty slowly and later dungeons take a lot of energy. Also, note you are required to be connected to the internet to play this game. 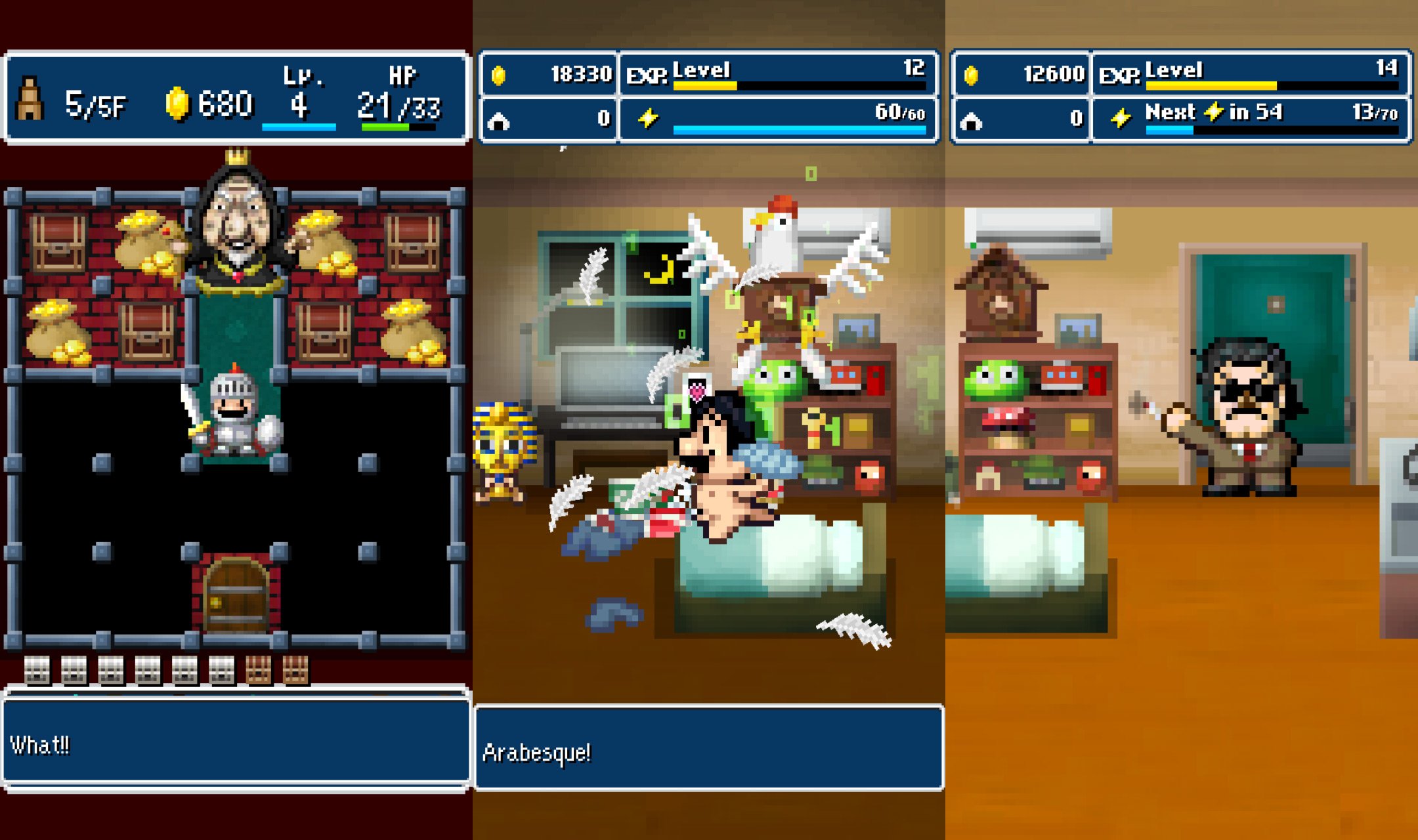 With the energy worry out of the way, I am now free to quest and loot as I see fit. Because Yamada begins every dungeon at level 1, I revisited dungeons I had completed before to ransack them for loot. Return visits are a necessity because you need stronger gear as you advance through the game and it’s the only way to unlock gold trophies. Weapons can be leveled-up and evolved into even stronger equipment. Wanderer dungeons change layouts each time you journey through them while other dungeons sometimes alter the orientation of a floor. In other words, you might find a dungeon where the exit is in the upper right-hand corner of the room and the next time you play its now in the lower left-hand corner because the room has been rotated 90 degrees.

More dungeons are available outside of the main story with dungeon spells. These, which are randomly delivered to your door, activate one-time use dungeons that can give awesome loot. When you get a dungeon you can share it on Twitter, where you can also find new spells others have posted to try out their dungeons.

Whether I’m exploring a new dungeon or just hanging around Yamada’s apartment, the game is an absolute delight for eyes. The pixel work here is top notch and elegantly matches the kooky ambiance of Yamada-kun’s life. Helping set the tone is the wonderful and loony soundtrack. The theme song is great and the Mamazon theme song is somehow even better.

From top to bottom I have nothing but love for this game. Its premise is simple and addictive, its world is vibrant and full of charm, and it offers you the opportunity to get rid of what is the most annoying aspect of free-to-play games for an arguably reasonable price. And, from what I can tell, there are no ads. In five days, Dandy Dungeon: Legend of Brave Yamada has changed my outlook on mobile gaming. And if you give it a shot, it just might do the same thing for you.