Crysis 2 was seen as something of a black sheep by fans of the original Crysis. I personally loved it, but others were turned off by its comparatively linear environments and plain New York backdrop. For many, the open jungle of Crysis was sorely missed.

Crysis 3 hopes to strike a compromise between the worlds of previous games, presenting a literal urban jungle. New York is overgrown with lush vegetation and fields of grass, while the remnants of concrete structures poke out amongst the green. The result is a game that looks like neither installment, yet plays a little like both.

Though maybe not quite in the ratio fans had hoped for. 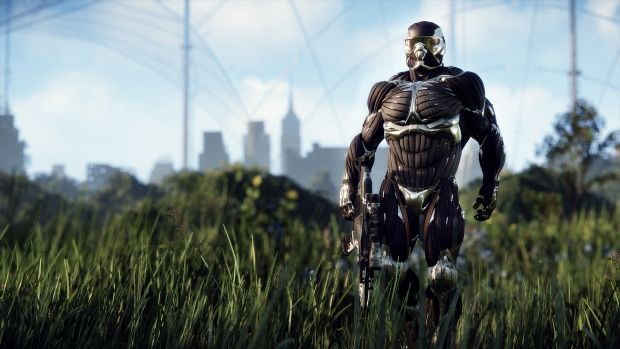 Those expecting a full-on return to Crysis‘ original glory days will be left disappointed, as Prophet’s latest adventure bears far more in common with Crysis 2 than first glances may indicate. For much of the campaign, Crytek’s richly designed concrete jungle is played mostly for aesthetics, with the occasional open environment serving more as a placebo than an actual attempt to break predetermined structure.

This is not to say the results are necessarily bad. To be quite honest, I’m one of the rare few who preferred Crysis 2 over the original, so the more focused environments and organized combat arenas suit me down to the ground. As Prophet, players will once again be charged with the task of systematically taking out Cell operatives and, later, alien Ceph warriors, in various kill zones intricately designed to allow for balls-out combat or subtle, predatory stealth. As with Crysis 2, the solo campaign is essentially a chain of these kill zones, stitched together by very pretty scenery, with the obvious joy coming from cloaking up and picking off the opposition one by one.

To aid stealthy players in their quest, returning ally Psycho quickly provides a high-tech compound bow, designed for silent kills. Unlike other weaponry, the bow keeps players invisible during use, allowing one to feel more like The Predator than ever before, silently eliminating an increasingly nervous and paranoid enemy force. Easy to use, and able to switch between arrows that explode, electrify, and take down heavy armor, players can almost blow through the entire solo mode with one new toy. This leads to the bow becoming — if you’ll pardon the ironic metaphor — something of a double-edged sword.

The bow is, indeed, lots of fun to use. It’s rarely not amusing to pick one’s way through a Cell base, forcing arrows mercilessly through the heads and throats of mortals, reserving the occasional electric arrow to fry anybody foolish enough to be standing in water. So effective is this weapon, even helicopters can be sent crashing hilariously to earth with just two thermite shots. The downside is, as you may have already guessed, Crysis 3 is often a remarkably easy experience, and the bow is so infinitely superior to any other weapon, it feels almost silly to use alternative firearms. 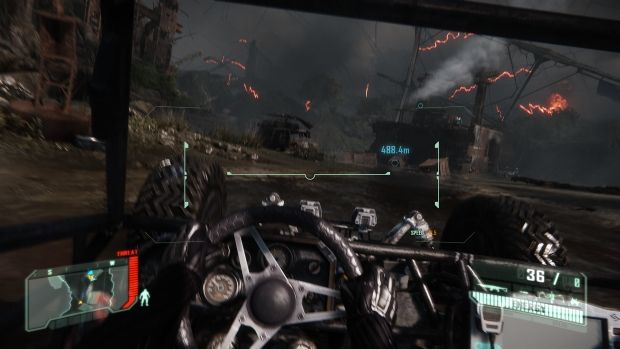 As with the last game, a lot of combat can be bypassed entirely by cloaking, the only challenge being one’s need to find the odd hiding spot where Prophet can recharge his suit’s energy. At first, the player feels devious and ghostly, sneaking past fools with all the grace of a demon’s whisper. Having already experienced this in Crysis 2, however, the experience soon grows far less edifying, especially once the more armored Ceph threaten to turn the game into a more bog-standard shooter. Despite Crysis 3 boasting a fairly short campaign (we’re talking five or six hours), I was quite ready for it to be over before the final credits rolled.

There are some definite high points, despite the overbearing feeling of familiarity and ease. Some of the quasi-open areas, aside from looking quite beautiful, boast optional side missions with rewarding upgrades or unique weapons. Areas covered in tall grass hide now-feral Stalker Ceph, who run through the greenery and try to hide, before closing in for sneak attacks. These moments are at least quite interesting, and manage to break up the monotony. Vehicular sections make the occasional appearance too, and include an excellent road trip sequence evocative of Half-Life 2‘s wonderful “Highway 17” level (though with far better buggy controls).

Crysis 3‘s story is absolutely ridiculous, and thinks it’s far more intense than it actually is, but nonetheless remains inoffensive and is at least presented with stylish confidence. The return of Psycho is quite welcome indeed, and the game’s plot very much becomes his own as much as Prophet’s. Dealing with the (physically and mentally) painful loss of his nanosuit at the hands of Cell, and now leading an embittered resistance movement, Psycho’s envy of Prophet’s power and feelings of inadequacy after becoming human again drive a lot of the conflict, while making for a character far more compelling than one might originally suspect. The supporting cast aren’t so interesting, and this game desperately needed an actual villain to center on, but nonetheless you have a story with some genuinely rousing moments, backed up by a sublime musical score that makes the action feel a lot more interesting than it may actually be. 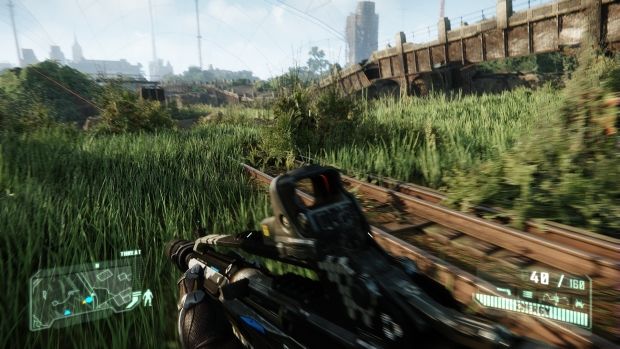 While the campaign feels like something of a step back, multiplayer has at last come into its own. Building on the “Call of Duty with super powers” foundation first established in Crysis 2, Crytek has expanded its online combat in all directions. There are more levels to gain, more weapons to unlock, more ways to play and an almost overwhelming number of optional challenges to complete.

The urban jungle setting really comes into its own during online competition, providing a mixture of dilapidated interiors and thick overgrowth in almost every map and ensuring all types of players — from armored gunslingers to perpetually cloaked assassins — can exploit their surroundings for the best possible performance. Multiplayer across most of the gametypes quickly descends into pure chaos, with players materializing from right under their opponent’s noses, mowing through ranks with terrifying alien weaponry, and jumping from high ledges to obliterate enemies with devastating shockwaves. In many games, this could be a messy, even sloppy, affair. Crysis 3 maintains a nice balance and, by ensuring each player can tweak their powers to suit their playstyles without becoming too much of a deity, carefully sustains an aura of carefully controlled anarchy. 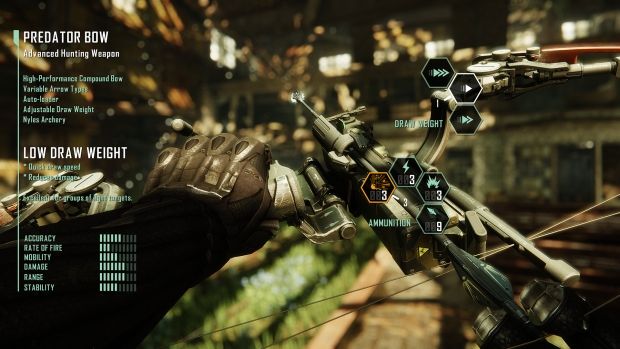 While Crysis 3 boasts the usual offering of deathmatch and capture-and-hold modes, the Hunter gametype by far stands as its jewel in the crown. This mode pits two nanosuited players against a larger squad of Cell operatives, armed only with their basic weapons and innate wit. Hunters are perpetually cloaked and armed with deadly bows, and any Cell player they eliminate will respawn as a Hunter. The goal for the hunters is to wipe out Cell, while all Cell has to do is survive for the allotted timeframe. While such elimination modes have been present in other games, it’s an absolute blast here, and something I’ve found immensely replayable.

While it’s obviously fun to be an invisible killer and pick off your inferior enemies, Hunter mode is far more entertaining as a Cell operative. Bringing back the feeling of hilariously helpless panic experienced in such titles as Aliens vs. Predator 2, it’s never not amusing to be a disadvantaged human, clutching your shotgun in the corner of a room while your allies are sniped all around you, and your motion detector rings ever louder in proximity to otherwise silent stalkers. It’s also immeasurably exhilarating to run into a hunter, start firing off rounds desperately, and actually manage to kill one.

As you might expect, Crysis 3 is absolutely gorgeous to behold. A more detailed look at the PC version is coming soon, but I’ve experienced it at max settings and can confirm it’s absolutely breathtaking, not to mention far superior to the console alternatives. That said, the Xbox 360 version has not been hit with the ugly stick, managing to pull its weight and provide something visually impressive — so long as you’ve not seen the PC version first. The jungle environments and predominantly daytime setting make for a bright and colorful world rife with detail. Small elements like swaying blades of tall grass or groups of frogs bouncing around ponds make for a game that feels that much more tangible than most.

Pretty as it may be, however, there are a few minor glitches holding things back, including the occasional physics error that sees guns and NPC limbs spasm temporarily, and a rare few moments where my controls locked up on me. In one situation I got stuck in scope mode, unable to return to my guns, and in a multiplayer session I was able to aim down my gun sights but not fire. These moments seem few and far between, and seem to correct themselves upon returning to a checkpoint or respawning, but they will certainly get you killed when they rear their heads. 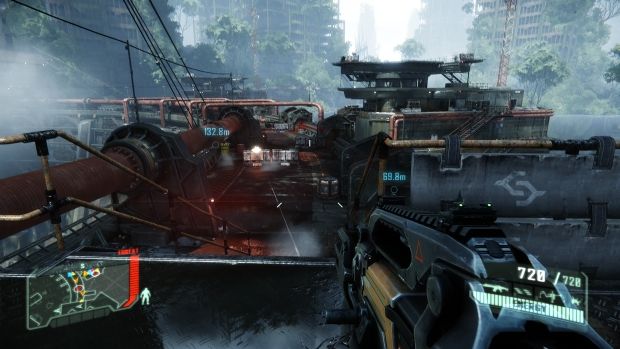 Crysis 3 attempts to strike a balance between Crysis and Crysis 2, but in doing so manages to lose a little bit of what made each game appealing. The result is a title that doesn’t truly match the open-ended excitement of the first game nor the revelatory empowerment of the second, yet manages to provide enough of both to at least tantalize, even if it doesn’t completely satisfy. Solo play is shorter than previous installments and not as enjoyable, but multiplayer goes some way toward apologizing for it by stepping up its game and providing a gripping new experience in Hunter mode. This is a game that feels like the very essence of a “third installment” — Familiar to the point of looking overplayed, but nonetheless refined and suffering no lack of quality.

And hell, even if it does feel a touch too powerful, that big damn bow is hard not to love.