For whatever reason, we never got around to reviewing it. Now that it’s debuting on the PlayStation 3 just this week (with Cross-Buy for all three platforms), this is the perfect time to fix that. 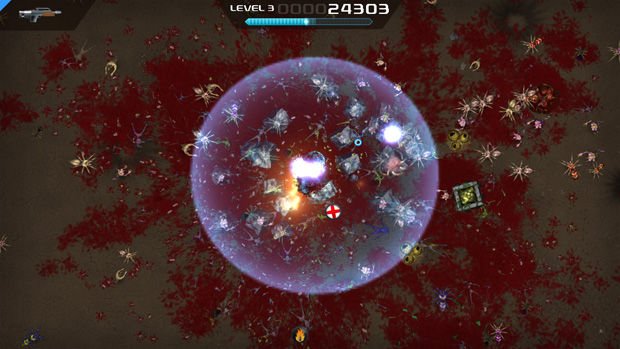 It won’t take you long to pick up Crimsonland. Just like the shooters of old such as Smash TV, your only controls are aim, fire, and if you want, occasionally reload. That’s about it, in the expected twin-stick format. Everything else is contextual, by way of random power-ups that are scattered about the battleground as you clear out waves of enemy hordes.

The general setup for each round is to pit you up against hundreds of enemies with a zoomed out view of the action. You have some health, so there is some leeway in terms of getting hit, but for the most part it’s very easy to get swarmed. You can write off the gameplay as simplistic, but once you start digging more into how enemy patterns work, it opens up.

Most of the foes in the game are slow-moving, which essentially creates a maze around the player character. You’ll have to surgically carve paths as you make your way around safe zones, and mistakes are often fatal, postponing the inevitable collective of enemies that will overwhelm you in just a matter of time. Short-term pickups like nukes can give you a breather every now and then, but picking up weapons that suit the current situation is what will take you further. It makes for a more hectic experience, and it’s all the better for it.

The main draw is the game’s “campaign,” taking place over six chapters with ten levels each. They’re basically just pre-determined waves, thrusting more aliens at you over time until you either adapt or brute-force your way through it. You’ll also have three difficulty levels designed to incrementally test your skills. It’s fun for a long while and great to come back to every so often, but there’s no real gimmick mechanic-wise to keep you from burning out.

Survival mode however, is the real meat of Crimsonland. It unlocks bit by bit as you complete the campaign, and is easily the best part. It features a full RPG-like level-up system, which grants you perks as you make more ultraviolent progress. You can customize your own character each round with enhancements like faster movement, a wider camera, a self-revive power, or more “out there” perks like a contract with the devil that takes 99% of your health for three immediate perks.

It’s incentive to do the story and keep going, with old school style unlocks. At times, it can feel like a slog to go through a worse mode just to get the good stuff, but it’s not like the campaign is “bad” by any means — just not exciting. If you’re starting to get bored you can also play with up to three other players locally. Sadly, there’s no online play, which is a major bummer for the game’s longevity. There are leaderboards though. 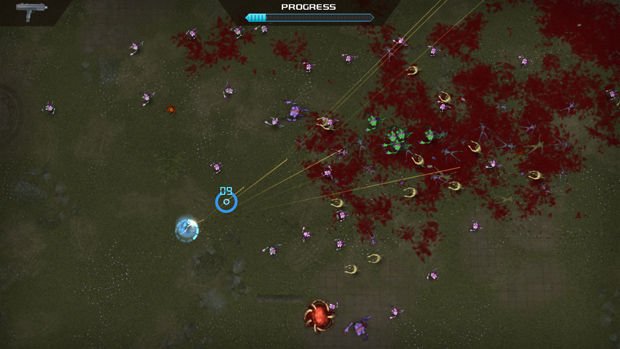 If you like retro shooters and relax by blowing stuff up, Crimsonland is an easy way to spend a few afternoons as long as you don’t expect anything groundbreaking. Some of you may want to stay away unless you have constant access to couch co-op, as it can overstay its welcome after every mission is said and done.