When reviewing a game, it’s a given that one would play the game being reviewed to learn more about it, but it’s decidedly less common that just posting a game review would make for a similar learning experience. That’s what happened when I put up my initial take on Code Vein last week.

And just what did I learn? Mainly, I learned that there’s a surprisingly diverse range of opinions on just what is most important in determining how much – or how little – a given game is like Dark Souls. And it’s in those differences of standard that a player can decide whether Bandai Namco’s vampiric action-RPG can live up to its clearest inspirations. 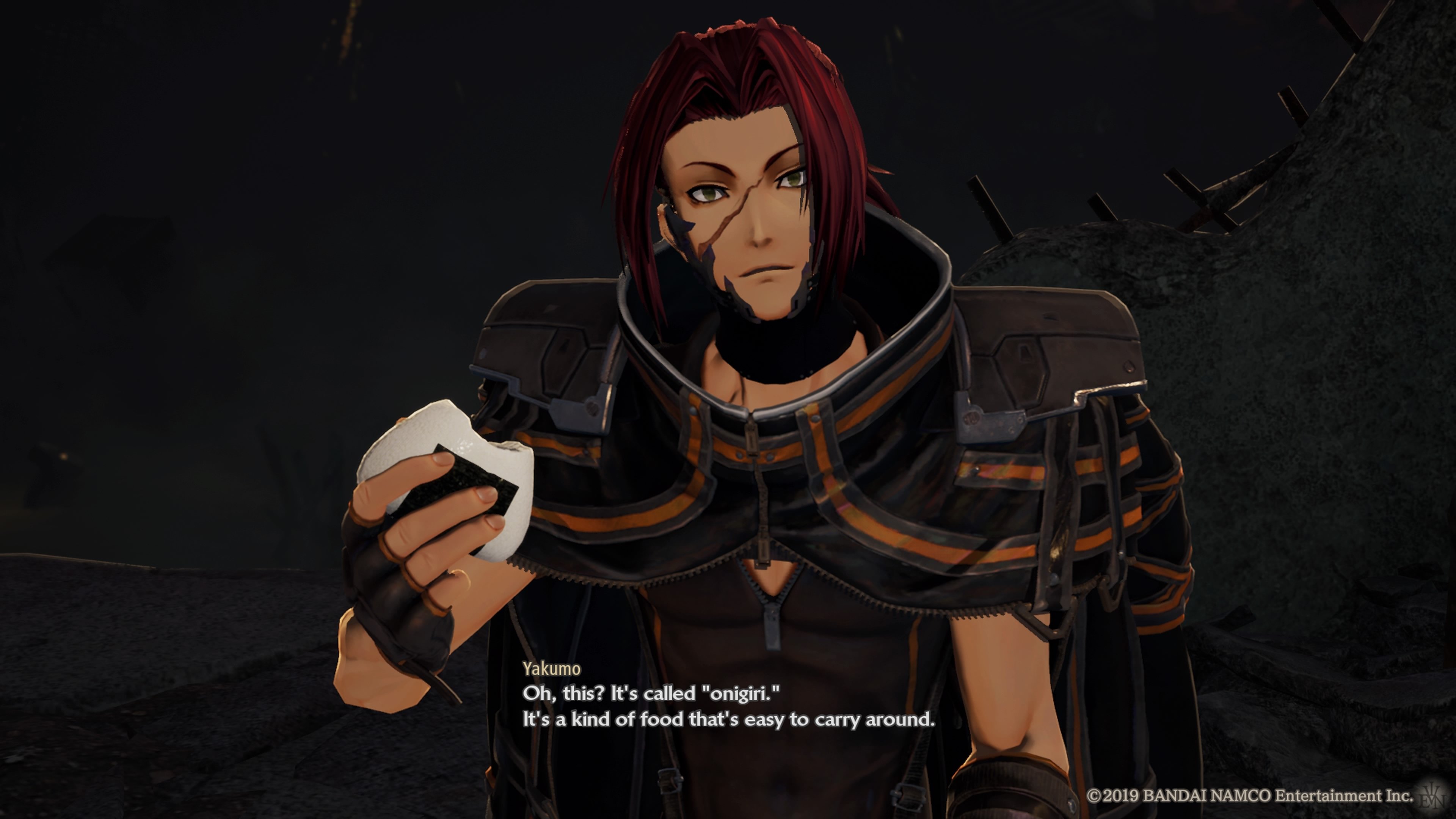 This isn’t to say I retract the claims I made previously. In terms of its actual structure, and the What-Do-You-Do-In-It that defines most games, Code Vein is very Dark Souls.

And yet, I can concede that tone, narrative, storytelling, and the nebulous nitty-gritty of “combat feel” can and do matter quite a lot, not just to individuals, but to the more qualitative task of deciding whether a person who liked (or hated) Dark Souls might like (or hate) Code Vein. In those respects, more stark differences emerge.

Code Vein is exactly the sort of game that won’t let silly things like “coherence” and “making sense” get in the way of its constant attempts to be awesome and over-the-top as often as possible. This is a world where the vampiric apocalypse hit hard enough to reduce the world to curiously arranged piles of rubble and craters, but somehow Tokyo’s hottest goth and visual-kei haute couture stores survived long enough to gift everyone left a pretty rad clubbing outfit. 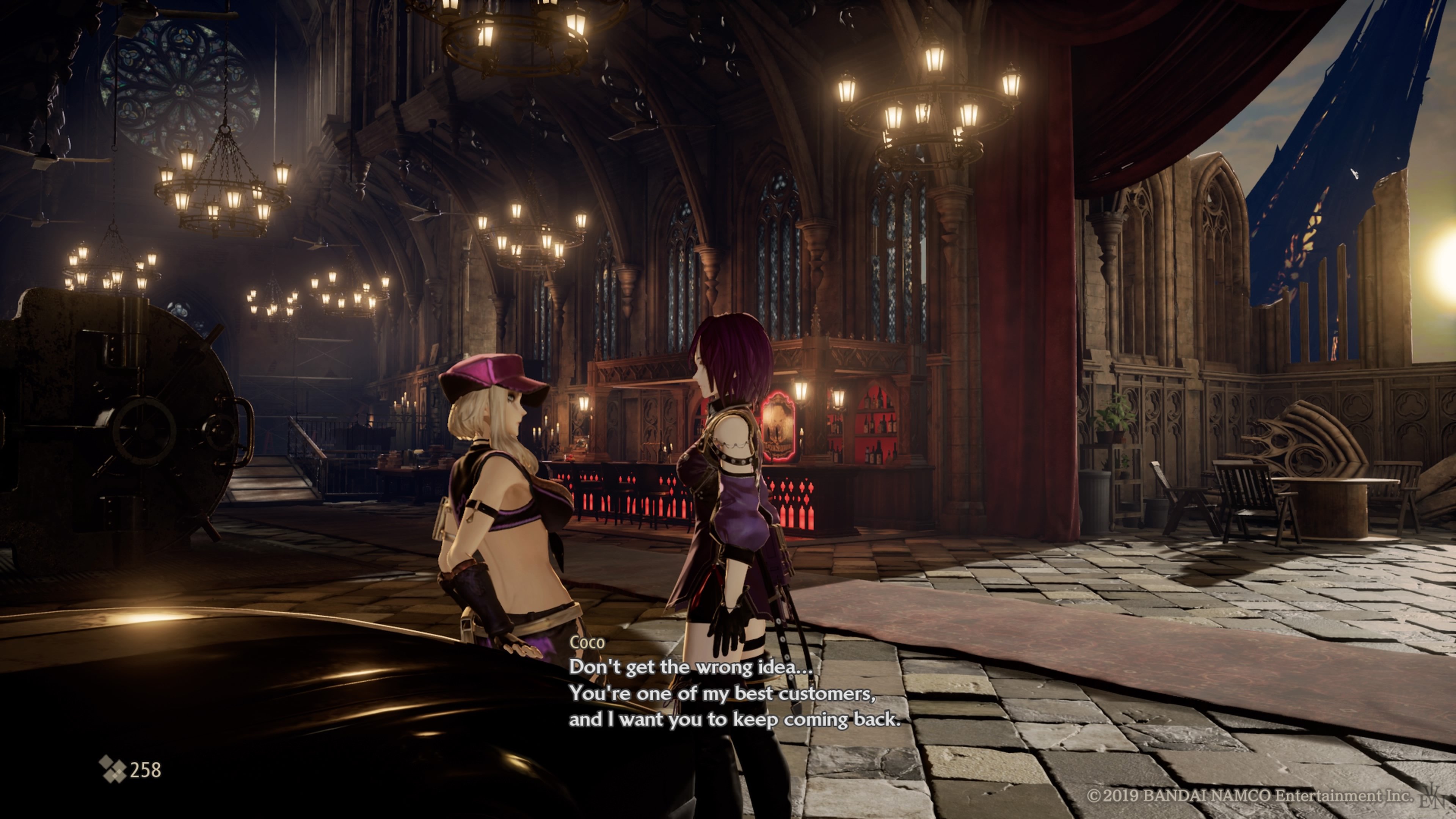 It’s a world that, unlike Souls games, where most narrative and world-building details are left unstate, the whole narrative is out-and-proud in its TV anime-style delivery. Amnesiacs, restorative hot springs, mysterious strangers with silver hair and golden eyes, and misused English terms abound. The act of getting new powers to use in combat involves a walk down a literal “memory lane”, watching voiced tableaus of a companion or a stranger’s tragic and affecting backstory.

It’s a game where draining an enemy kicks off a cool cinematic takedown, where your awesome sci-fi gas mask is replaced by an another, even more awesome devil gas mask that you use, along with monster parts growing out of your armor, to tear into an enemy, drinking its “ichor” fuel your magic. Code Vein oozes style, and does its level best to let you be as stylish – or silly – as you want to be, thanks to its highly detailed character creator.

Already in the week after release, custom creations resembling popular anime and game characters have made the rounds on social media. It’s not quite as crazy as the editor found in, say, Soul Calibur VI, but it’s more substantial than most of its genre peers. Better yet, the game seems proud of that fact, evidenced by little interaction points in the hub area that lock a character into a bespoke pose (such as lounging on a couch) and adjusting the camera angle to generate good screenshots. It’s as if the developers didn’t quite have the resources to implement a “true” photo mode, but just knew they had to support players that would want to take hot screenshots of their work.

Narratively, Code Vein does keep a few bits and pieces close to the chest, keeping big-picture background details in the margins just long enough to spark curiosity and, importantly, the tiny bit of investment one needs to start being interested in a game for its own sake, rather than just in how it compares to the other things one could be playing. 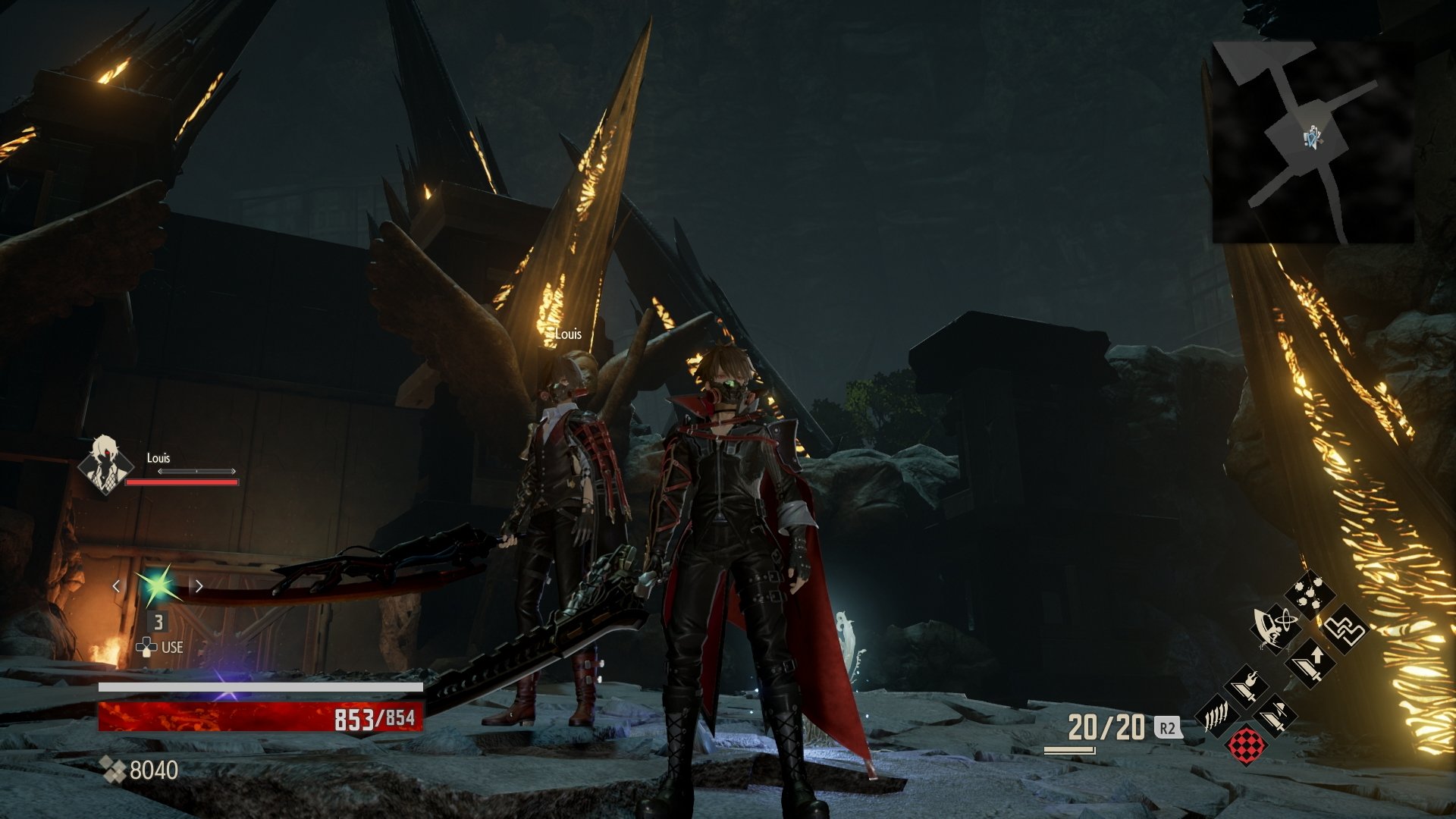 If Code Vein is a radical departure from its inspiration when it comes to tone and storytelling, its mechanics will be familiar to those acquainted with the God Eater franchise, with which Code Vein shares a number of key figures, including Director Yoshimura Hiroshi and producer Iizuka Keita. God Eater, which owes as much of a debt to Monster Hunter as Code Vein does to Souls, plotted a similar basic strategy: Preserve and replicate some key ideas and core structural/mechanical elements, make it more approachable and permissive, then juice the aesthetic with plenty of appealing anime nonsense.

In combat, Code Vein plays fast and loose, with weapons being much lighter and quicker to swing than their size would imply. Movement and dodge timing is closer to Bloodborne‘s end of the spectrum, favoring movement and flexibility over precision timing, stamina management, or any form of “block-and-poke” fighting. Bosses and even minor heavies swing wide and fast, with some larger foes having a nearly 360-degree coverage in their big swings. This would feel even less fair than expected for a Souls game, but Code Vein compensates by adding plenty of safety nets, not least of which is the constant presence of an AI-controlled buddy. These buddies don’t quite last long enough in a pitched fight, but against most normal foes they’re highly effective – perhaps a tiny bit too much so, given they can kill normal enemies a tad too quickly, making it annoying to try to augment one’s Ichor supply using drain attacks or parries.

Other safety nets include a convenient mini-map, more closely-spaced checkpoints, and powers that add extra damage mitigation, preemptively block status effects, and even teleport players back to the last checkpoint they used, with all their gathered Haze points in hand. Not to mention that over time, most players will accumulate so many Gifts, Blood Codes, and bonuses that they’ll likely find an ideal, game-breaking combination of equipment and abilities that trivialize any encounter. And it’s absolutely fine with that. It knows that the best Souls games (and Souls-likes) included being exquisitely “breakable” as part of their appeal, and Code Vein makes it easier to start on this indulgent path, opting not to punish the players who do so. 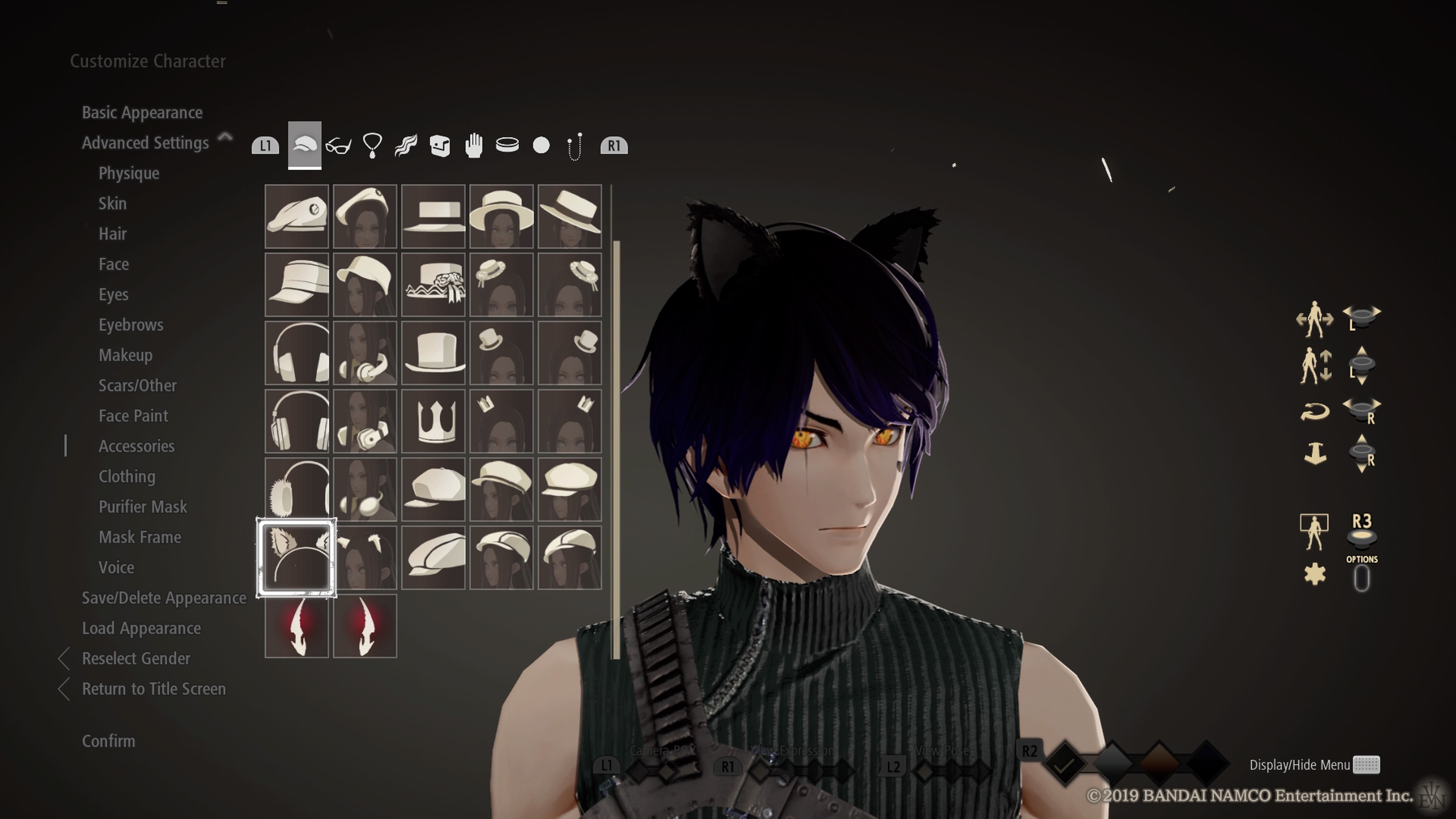 The level design, however, does leave something to be desired. Though the game’s internalized the appeal of Dark Souls‘ multilayered, looping environments, the aesthetic is pretty flat more often than not. Perhaps it’s because modern urban ruins are inherently less interesting than fantasy or period settings, but no single location stood out to me too much. Some standouts included a fog-chocked, flooded underground car park that had me dropping chemical lights to mark out safe zones, or a cliff-side labyrinth that was actually the dried-out bay, full of shipwrecks and dead coral. The optional “depths” dungeons aren’t much help either, being even more mundane than the main areas and oriented around providing a convenient space to farm for cash and materials. The variety is there, but ultimately Code Vein‘s levels are spaces to fight enemies and grab loot, rather than real or interesting-feeling places.

More esoterically, the game also doesn’t bother to try very hard to implement a novel online component. Players can search for “distress signals” to join others’ games or open their own up, but these liaisons are brief and generally unmemorable, mostly a form of finding extra help for a tough boss fight or to further trivialize a stage. There’s nothing as uniquely interesting as Dark Souls‘ covenants or Demon’s Souls’ Old Monk in Code Vein‘s multiplayer blood, and I can’t help but think that’s a missed opportunity.

Other slightly baffling rough edges and seemingly cut corners help to bring down the mood. Characters don’t emote much outside major story beats, and in many cases don’t even animate their mouths when talking. The UI can make it hard to track which powers a player has unlocked, or explain adequately why a given equipment or stat choice might lock away access to a particular ability or gear piece. Even the hot springs area, which nominally serves as a spot to look up codex entries or review the story so far, doesn’t let players replay viewed cutscenes, even though it feels like it totally should be the right spot for a “theater mode”. Little though they may be, they do tend to crop up and underline that Code Vein isn’t quite up to the same level as the games it emulates most closely. 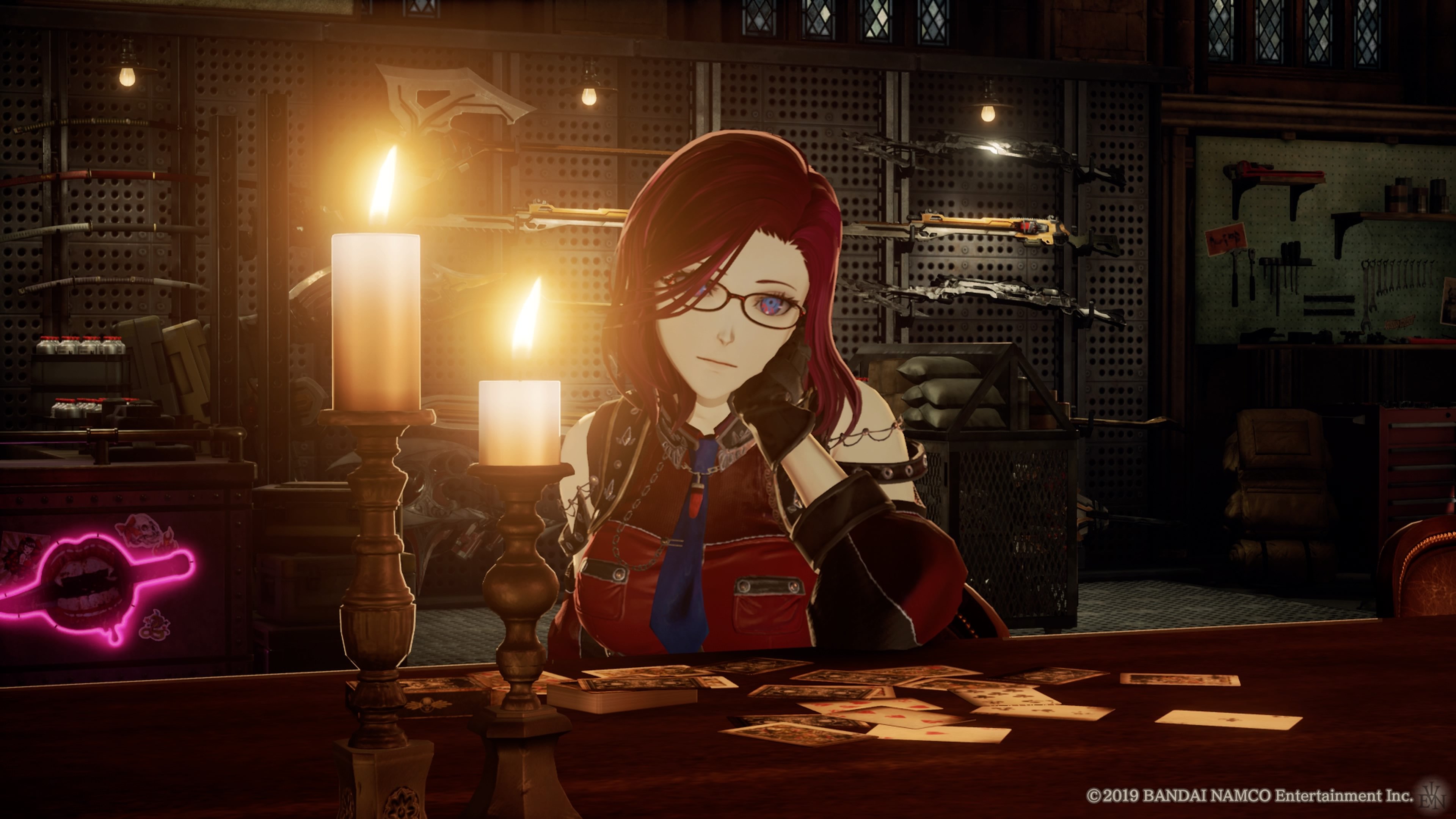 So is Code Vein like Dark Souls? In some key senses, yes, but in others, it’s quite different, and it’s in those gaps that it manages to put some daylight between itself and its forebears, establishing its own place in an increasingly crowded field. It’s a stylish action RPG that replicates the structure of Dark Souls while leavening its strict attitude towards mastery with fallbacks and safety nets, making it easier to pick up and persevere with. Players willing to embrace its over-the-top aesthetic and narrative sense – while overlooking its shortcomings in level design and combat tuning – will find an enjoyable, relaxed romp, a fun trifle whose spirit elevates it from crude clone-job to loving send-up.

Ironically for a game about undead vampires, there’s a strong pulse and beating heart at Code Vein‘s core.